As I had mentioned a few months ago in one of the responses to a post, I had plans to "upgrade" my home sometime in 2014...

As fate would have it, a house opened up for sale recently fitting the family's needs and I decided to grab the opportunity. This is going to be a very busy autumn for me and the family with a move to the new place in November! Between now and then, I've still got 2 business trips among other duties.

The upshot to the move? I'll finally have a good sized home theater space for the transition to a dedicated sound room for both stereo and multichannel listening :-). With that in mind, I've sold off the Simaudio Moon i3.3 integrated amp I had been using for the last few years...  It's time to move on to separates and the first box in this new system is this baby: 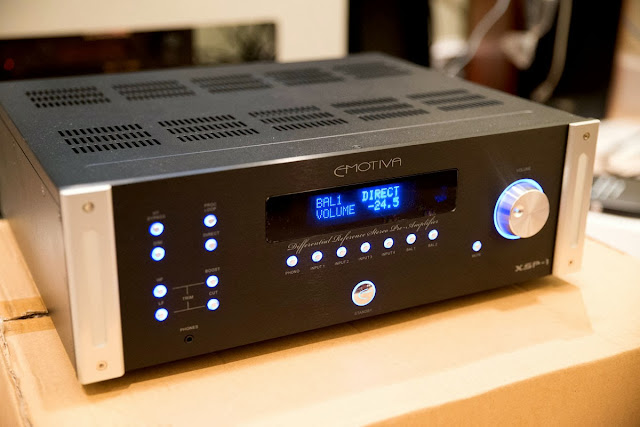 Yup, the Emotiva XSP-1 pre-amp - I got it on sale recently at 10% off (~$820USD before taxes). In the next few months, I hope to get a couple of monoblock amps for the fronts (may consider the Emotiva XPA-1 Gen 2 coming out soon). In time I'll buy a processor for the fancy "new" surround formats like DTS-HD Master Audio. For now, I figure I can live with the 10-year old Denon AVR-3802 for decode duties with the ubiquitous Dolby Digital and standard DTS - obviously multichannel isn't a major priority for now.

Just a few comments about the XSP-1. It's a nice full sized component weighing a reasonable 28lbs. The rear panel layout is good and connectors are of good quality - gold plated and robust enough to feel that they're not going to fall apart any time soon. It has a phono preamp with impedance settings which I suspect I will never use (not interested in vinyl for now at least). Line level outputs to the amplifiers available as RCA and XLR's (fully balanced topology of course is a main selling point for this preamp compared to less expensive options). I'm looking at integrating something like the Paradigm Signature SUB 1 into the system so I believe I will be using the crossover setting real soon and keeping it at the 50Hz low end. It'll easily handle a single or dual powered subwoofers. There's also a "Home Theater Input" section to easily integrate this unit in bypass mode for surround functionality. 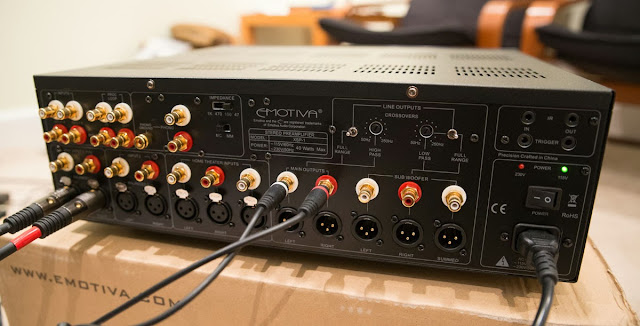 I see that a full set of measurements have already been published by Secrets of Home Theater and High Fidelity. For curiosity, I might try out a few RightMark tests to see what the difference is between this unit and the pre-amp output from the Denon AVR-3802 at various output levels...  Could be educational.
In terms of subjective sound quality, so far I'm just running this in a compromised system. With the Simaudio gone, I'm connecting the XLR from the TEAC UD-501 to the XSP-1 and routing the RCA output to the Denon's "external in" and using the receiver's amplifiers to drive the Paradigm Signature S8's... All I can say is that it does sound better than TEAC RCA to the CD input of the Denon. I wonder if the Denon is doing any internal ADC/DAC step even in the "Direct" setting which is supposed to defeat any DSP happening. For example, listening to Yello's 2009 album Touch Yello, the spatial ambiance and sense of "surround" was more prominent with the XSP-1 than directly into the Denon. Those Q-Sound albums like Madonna's Immaculate Collection, Def Leppard's Yeah!, and Sting's The Soul Cages also sounded fuller. Again, I'll see about obtaining some measurements and compare the quality of the Denon output with this new stereo preamp.

If there is one criticism I have about this unit, it would be the headphone amp and output. As you can see from the first picture, the headphone jack is the small 3.5mm variety. It's fine for most of my headphones but for the higher end units like my Sennheiser HD800, I'd prefer the full 6.5mm (1/4") plug rather than having to use a converter.

The preamp will mute the line level output when it detects headphones in place so that's appropriate. The other issue is that the headphone output is relatively weak. The most power-hungry headphones I have is the AKG Q701. At full volume, it's loud enough for most rock/pop recordings. However, classical recordings with higher dynamic range and produced at softer average levels would need a more powerful headphone amp.

BTW: Can anyone recommend some good audio equipment stands? I'm planning to hang the flatscreen TV on the wall so don't need a TV stand. Something like the stackable Lovan Sovereigns look like a good idea since I will have enough room to put two low stacks side-by-side in front of the TV on the hardwood floor. If you know of other models/brands, I'm "all ears"!

Posted by Archimago at 15:48:00
Email ThisBlogThis!Share to TwitterShare to FacebookShare to Pinterest
Labels: Emotiva