I've entitled this post "Last words..." because I don't think I'll devote any more time to Pono here or in the forums after these thoughts. Unless I get my hands on a PonoPlayer to measure of course. (I still have not seen any PonoPlayers around here in Vancouver yet.)

Vegas CES2015 has just passed and we see further revelations and morphing of the Pono business plan as expressed by Neil Young in this interview:


- Neil Young "couldn't listen to music for 15 to 20 years". Maybe because the mastering sucked in the last 15-20 years? Why not listen to LPs then?

- He used "The Revealer" to demonstrate sound quality between MP3 and various resolutions in his car - please release this "Revealer" software so we can have a look at what tricks were used on the artists.

- PonoPlayer and hardware probably will be discontinued not long from now (get 'em while ya can!). Mission accomplished on "showing people what can be done." What is this about not having "all the cash needed" to make all the players?

- "Certified Pono" or "Branded Pono" stamps of approval will be offered to other manufacturers/distributors for their hardware or music store. Happy to "share technology."  I'm not sure what special technology Young feels he has rights to. "Somebody's watching for the quality" supposedly. "Possible" subscription streaming service in the future.

- Streaming "sounds like shit". I doubt the man is aware of lossless streaming already in existence. I also wonder what the man thinks about compression like MQA :-).

Apparently there's now news that "engineers" inside the Pono company aren't so sure about the sonic improvements either. Those darn engineers - always out to spoil a good party!

Also, reviews are coming out for the PonoPlayer. For now, it's safe to criticize the device for expected deficits like its limited functionality, basic UI, slow USB2 transfers, and potential issues with the Pono Store. In time, I suspect we will see comments of disappointment around God-like expectations from the sound quality itself - the core "feature" promised by Young and his entourage. I don't think I need to remind readers here that this is primarily a mirage with most albums marketed these days as high-resolution audio.

On the software side, we're now seeing some of the Pono releases on DRDatabase. What do we know so far if we look at the mastering? Let's look at a few from the store: (Thanks to the readers who sent me this info!)

Neil Young - Harvest (24/192) - good dynamic range. Almost exactly the same mastering as the DVD-A 24/192 release from 2002 (0.01dB difference). Kudos to Mr. Young for the excellent mastering of his older music. The thing is, this is nothing new, music lovers who have been listening to Young's high-resolution stuff have been listening to this for more than a decade.

Red Hot Chili Peppers - Stadium Arcadium (24/96) - ugggg DR5. About the same as the original released CDs. Clearly they did not use a digital version of the superior deluxe Steve Hoffman vinyl remaster from 2012. Can someone tell me what Pono's Californication sounds like?

Metallica - Death Magnetic (24/88) - DR5. Notorious overcompressed album. At least a little higher average dynamic range than the original CD measuring DR3. Not as dynamic as the Guitar Hero III rip which measures DR12 and continues as the best version for sound quality.

Metallica - The Black Album (24/96) - DR7 average for the album. This is the same loud remastering from the 2001 DVD-A. Curious choice since the HDTracks release from 2012 was more dynamic at DR10 (I'll hold judgment on this one as I've never heard this). My favourite version remains the original CD from 1991 (DR11) - just turn up the volume guys, it sounds great! 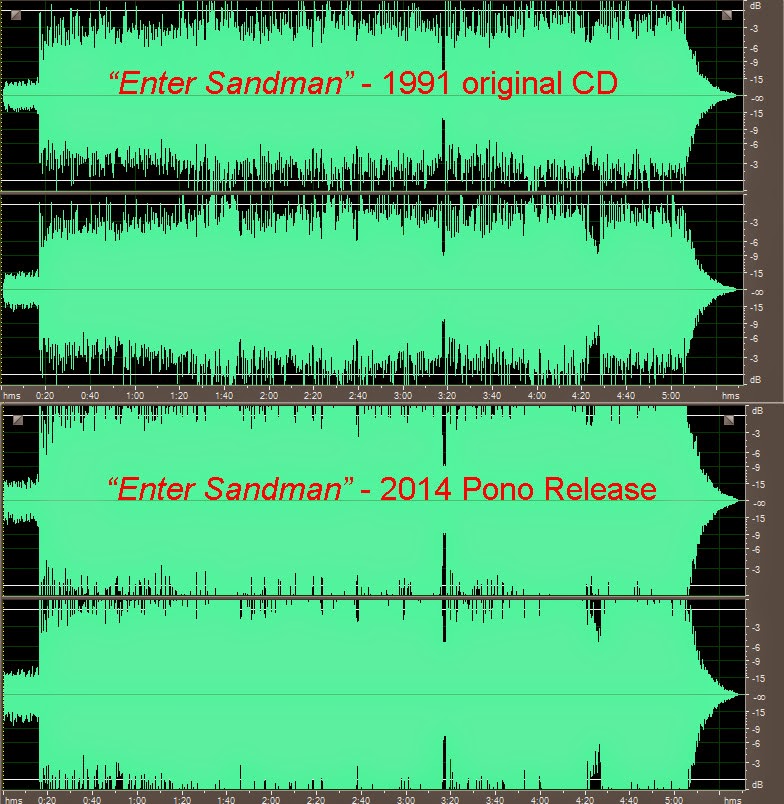 Beck - Sea Change (24/96) - DR7. Looks like a high-bitrate version of the original CD mastering from 2002. MFSL did a lovely remaster in 2009 with DR12 and an extra track for those who like this album. The DVD-A released in 2003 was slightly more dynamic at DR8 (I've been told Pono version sounds about the same as this DVD-A).

Beck - Mutations (24/96) - DR7. Basically the same master as the original CD release but 24/96 and just slightly louder overall. It is a true 24/96 and not just upsampling, so this is good at least. I mentioned in a previous post the presence of a Canadian promo CD which managed to escape excess dynamic range compression (DR11). 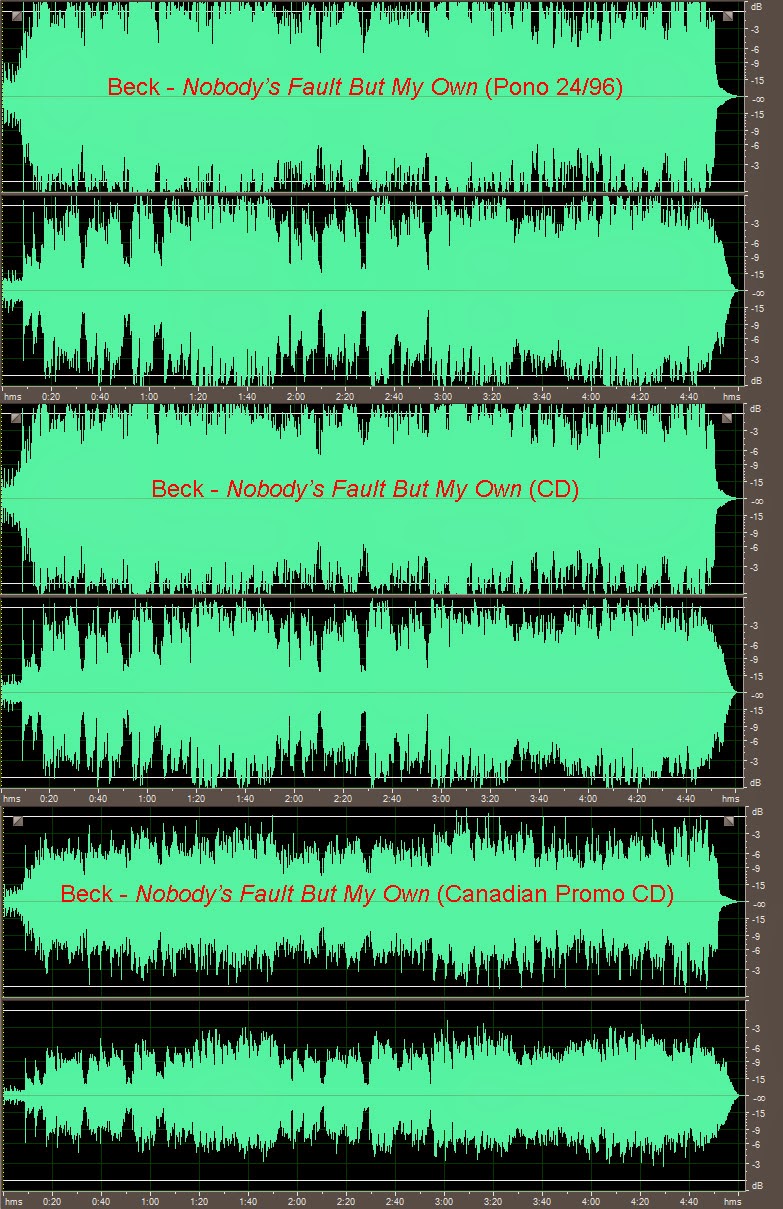 No surprise, Pono prefers bit-depth and samplerate numbers over more important matters (IMO) like dynamic range. Realize folks that LOUD, compressed masterings like those DR7's from Pono do not deserve to be 24-bit files! Just because it's 24-bit doesn't make it sound any better - you've just wasted another 33% of your disk space. The dynamic nuances, life of the music has been squashed in ways worse than lossy encoding. Music mastered like this truly only deserves high bitrate MP3 at best. Mr. Young, can you comprehend this obvious fact!? You have not "rescued" any part of the art form but have just perpetuated the sale of suboptimal digital recordings wrapped in a high resolution PCM format. You keep bringing up Steve Jobs and your discussion(s) with him... I'm sure if Mr. Jobs were alive today, he'd surely fully understand this concern. He has been dead since 2011 and it's not good to be implying anything unless documented especially since Apple hasn't moved towards offering lossless, much less even the mention of high-resolution. Needless to say judging from the albums above, there is no evidence of any substantial remastering effort at this point from Pono. Since Mr. Young is often very blunt in his declarations, permit me to be just as blunt. Mr. Young, from the perspective of many who actually care about sound quality, you are selling shit masterings in massively oversized boxes, wrapped up in shiny paper with an elaborate bow on top, while effusing comforting hot air tinged with perfume.

For a moment, imagine if the Metallica Artist Signature PonoPlayers sent to Kickstarter supporters were preloaded with the original 16/44 release of Metallica's "Black Album" instead of the dynamic compressed 24/96. A note with image of the spectrum would accompany the player warning about how the original release sounds better than compressed "decapitated" dynamic peaks from the later 24/96 remaster available elsewhere (the old DVD-A). Finally, the note also explains how a 16/44 version was therefore chosen for this special edition since the 24/96 did not live up to standards of fidelity for those who appreciate the best sound quality version for the time being. An action such as this would have been "revolutionary". It would have raised eyebrows, created buzz and discussion on the audiophile forums and differentiated Pono as a company that took a stand and truly cared about the quality of the mastering. It would obviously also send a message that somebody is actually checking and doing something about it!

Alas, another one of many opportunities wasted. In my previous post, I asked about which mastering would be used when Pono sells Nirvana's Nevermind. So far, seeing the choices they have made, it's probably a safe bet to say they used the unfortunate 2011 24/96 compressed remaster or some close variant (maybe someone can double check and let us know?).

So Neil Young wants to make money by graciously allowing (for a small fee) others to use the "brand" Pono now? As far as I can tell, their actions betray the intent at this point. Pono is betting that somehow having their name on an item will add value and sales? Seeing a Pono logo on the outside of a device isn't exactly going to evoke the same degree of respect as THX certification, not does it imply some kind of desirable feature like the DTS or Dolby logo, does it? At this point, at best, we have a company that has produced a good sounding player device (there are a number of digital players out there capable of high-resolution as well; for a walkaround device, the iPhone 6 is already capable of good 24/48); and the music store just looks like typical stuff found elsewhere already.

I suspect people will mention that Pono promises to "upgrade" purchases with newer/better versions/masterings as they become available. Let me know when this happens (and likewise the promise of DSD - I wonder if it'll handle DST compression)! If Pono survives financially, and gets through the next year, I think its niche will be as a typical lossless music reseller as Neil Young's technically incompetent (though at times mildly entertaining) salesmanship cools off. I do believe it's already too late to make a good first impression for those who put value into sound quality and wished for an honest change. Or for Pono to be taken seriously as an authority on quality sound.

Goodnight, Pono. Let's see if the wedding works out.

PS: Could someone please fix "pono . com" - I can't seem to find my music there! Not exactly the kind of "media" the kiddies should be browsing either...

PS2: There's now a program called flactag that tags FLAC files so it lights up the Pono blue LED. Supposed to indicate an "authentic" music file from the Pono store I guess - whatever the value of that might be. See comments here.