MEASUREMENTS: The Effect of Speaker Grilles...


A quick measurement for this week...

I was curious the other day as I was doing some room measurements what effect speaker grill(e)s make. My Paradigm Signature S8 V3's have typical fabric and plastic grilles up front. Simple question - How much difference does the grill make to the sound of the speaker?


Audiophile magazines and "serious" listeners tend to recommend removing the grilles. In my experience, I have not really heard much difference over the years with my various speakers and have tended to keep them on. This has been especially true in the last 10 years with kids in the home and especially when their (untrained!) friends come over so as to avoid any disasters with sticky fingers contacting speaker cones :-).

So, here's the simple setup. I have my calibrated Behringer ECM8000 measurement microphone placed 65" in front of my speakers on axis at approximately the heigh of my mid-range driver. I made a second set of measurements with the microphone 20-degrees to the left off axis as well to see if there was a difference with and without the grills attached.

I measured the speakers with the latest awesome Room EQ Wizard v5.12. Test tone was played off the TEAC UD-501 DAC while measured with my E-MU 0404USB. The right speaker was tested. 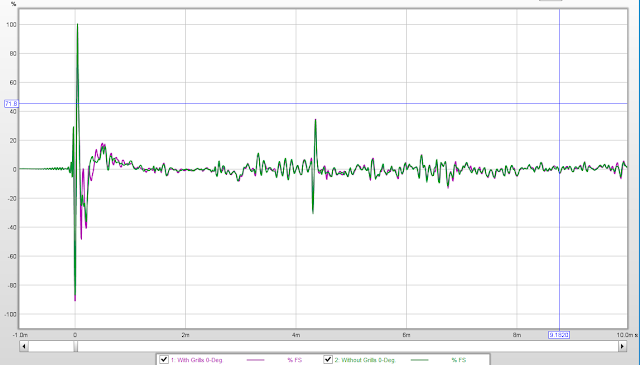 As you can see, the grilles made a difference in the upper frequencies starting around 3kHz. Nothing untoward was seen with the time-domain impulse response (there's a typical floor-bounce first reflection seen slightly past 4ms).

Looking at the on axis frequency-response graph, overall, the magnitude of the difference with the grill is that it toned down the tweeter response by about 2dB from about 3.5kHz. However, there was a bump from 8.5-11.5kHz where the grill actually accentuated the frequency response up to 1dB above the measurement with the grill off. With good ears, these differences could represent an audible tonal difference and would be dependent on the music of course. For these speakers, the overall effect of the grills would be a taming of the high frequencies (probably a good thing in terms of general listener preference).

At 20-degrees off axis, the measured difference between grill on and off was actually a little smaller.

This amount of difference with grill on/off is expectedly much smaller than the difference between listening to the speaker on-axis and 20-degrees off: 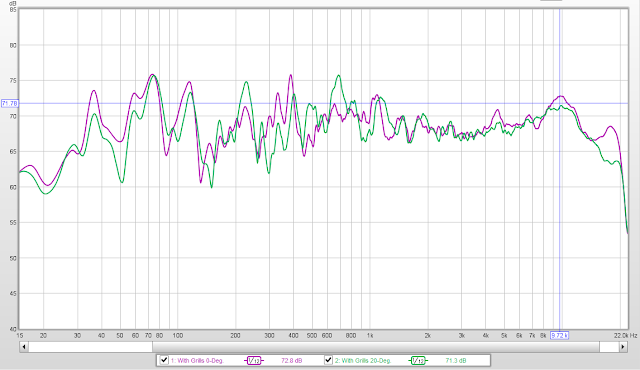 The bottom line then is yes, at least in this example, the speaker grill does make a difference. However, the difference is quite small, restricted to the high frequencies (the Paradigm S8 speakers crossover at 2kHz so it's the tweeter frequencies affected which makes sense from a wavelength perspective). Your mileage may vary as usual but I suspect in general what I'm seeing here is rather typical...

Doesn't seem like much new this week in audiophile news. Looks like another audio show has gone by without Meridian doing any A/B demonstration comparing their MQA encoding with a reasonable comparison like standard lossless 16/44. This seems odd after so many months of demos. Gee... Could it be that there's minimal perceptible difference using the same mastering?

Remember: Get your results in for the Digital Filters Test! We've surpassed 40 responses... Keep 'em coming!

Have a great week ahead and enjoy the music...