Well, in the "better late than never" category, when I returned my friend AudioPhil's Cayin RU6 the other week, I borrow his Chord Mojo ("Mobile Joy", ~US$475 new but I think currently discontinued) for a spin!

This DAC has been out since October 2015! That's ages ago in the world of electronics. However, to be honest, high fidelity audio reproduction is rather ageless whether the device is 10 months old or 10 years old. So long as the internal components aren't deteriorating with age ("break-down" instead of "break-in", right?).

As you've probably seen in countless reviews on the Mojo (like here, here, here), this seems to be quite a popular DAC with a good following. It has been said that Chord sold something like 100,000 of these over the years. Objectively, the Stereophile review in fact showing some impressive performance results back in 2016.

As usual, Chord gear tends toward the large bulbous glowing buttons, at times steampunk metal esthetic. Colors are used to provide feedback on volume (the pair of buttons for +/- volume) and the main power button (red in image above) which changes color for sampling rate. I think this is an acquired taste and figuring out the colors will take some time as you get used to the sequence of colors in a rainbow with red (lowest volume/samplerate) on one end and purplish/grey/white (highest) on the other.. 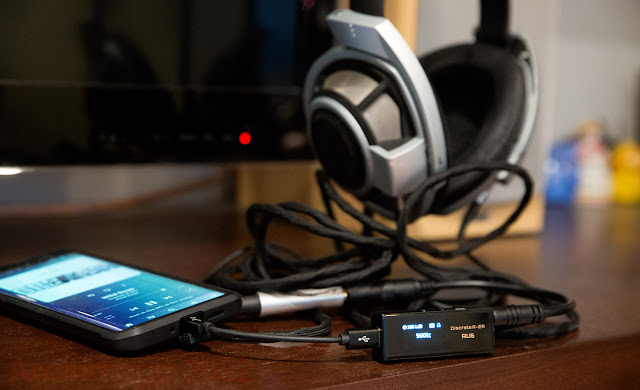 In the last few years, we've seen a resurgence in interest around R-2R DACs. Back in the day (like these old CD players for example), multibit ladder technology was the way to do the conversion until the rise of 1-bit and multilevel sigma delta modulation DACs became the norm.

High quality R-2R does require extra effort to make sure the resistor levels are precisely trimmed to achieve higher resolution. This is why hybrid techniques have also been implemented over the years such as the TI/Burr-Brown segmented architectures (like with my TEAC UD-501).

With this post, let's focus on the Cayin RU6 DAC (~US$250), a new USB-C dongle device (comes also with a USB-A adaptor) which aims to provide high performance headphone playback of PCM up to 24/384 and will accept DSD256 by converting the 1-bit SDM to PCM internally (no native DSD conversion).

Thanks to my buddy AudioPhil for lending this device for testing!

As you've seen on the blog over the last year, I've been using the E1DA Cosmos ADC from Ivan Khlyupin for a number of measurements recently (early report discussed here). I remain quite impressed by the performance of this little device with some caveats (lower input impedance, individual unit idiosyncrasies including what "grade" device one has).

While the ADC comes pre-calibrated by E1DA and unless you really want to spend some time playing with it, one should probably just leave it alone. Nonetheless, it's pretty clear that this is the kind of device made by and for audio hardware geeks! ;-) One has the opportunity to use the Cosmos_Tweak Windows program to fine-tune the calibration by changing independent ADC 2nd and 3rd harmonic compensation amounts, SDM integrator setting, and digital filter for the ESS Tech ES9822 chip.

So then, for this post, let's spend some time in the area of calibration and see if we can tweak the ADC using the device above - Victor's Oscillator (US$57) - an ultra-low distortion, 1kHz analogue signal generator which comes pre-assembled and tested from Riga, Latvia. As you can see in the image, there are 2 single-ended RCA outputs, with volume control ranging from 300mVrms (-8.25dBu) to 2.7Vrms (+11.0dBu). Note that a 10kHz version (and other custom versions) can be purchased as well but for typical audio purposes, 1kHz is in line with human hearing sensitivity.

As We Hear It 2022: Hypex nCore NC252MP DIY, The Joys of Modern Digital Audio, Upsampled Streaming, and Audible Amplifier Differences.

Happy 2022 everyone and greetings from Honolulu. As Bing Crosby once sang, "Here we know that Christmas (and New Years) will be green and bright" in Hawaii. A welcome first escape from Canada since the Pandemic began for myself and the family. Always good to escape winter in Canada for a little bit even if it's from relatively mild Vancouver although this year looks like we also avoided the snowy cold snap!

As a first post for 2022, let's look in the (virtual) mailbag a select a few items from readers for an "As We Hear It" post that have come in over the last number of months.