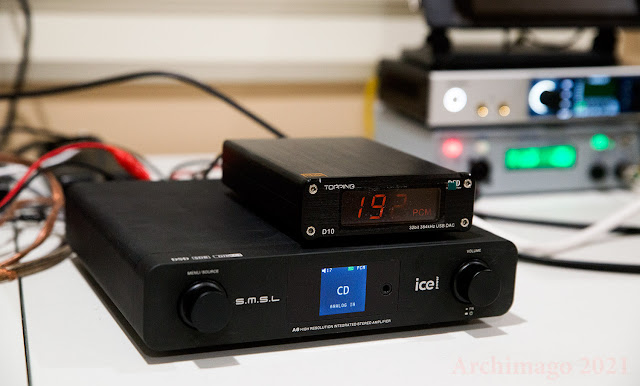 Over the years, there have been devices I've been meaning to measure but one thing or another got in the way. This SMSL A6 amplifier was something I discussed here on the blog back in 2017 (a subjective review and measurements of DAC output). Over the years, this device has been happily amplifying signals for my dad's Klipsch Forté which is quite a sensitive speaker of 96dB SPL/m/2.83V; certainly by now it is very much "burned in". ;-)

I wanted to measure this device as an amplifier out of interest, knowing that inside this is the Bang & Olufsen ICEpower 50ASX2(SE) Class D module. While the datasheet for this amplifier module is already very detailed, there's nothing like measuring oneself!

This ICEpower module is rated at 2x47W into 4Ω, both channels driven to 1% THD+N. The power rating halves to 25W/channel into 8Ω. Within the ICEpower ASX series, there is also the 250ASX2 that will supply up to 250W/channel into 4Ω, and 125W/channel to 8Ω if you need more power.

The nice thing about this Class D module is that it's inexpensive and easily available for hobbyists such as through PartsExpress (current price US$118), sometimes through Amazon as well. You could buy one of these and get a simple case such as this Ghent Audio one and assemble it for yourself quickly. 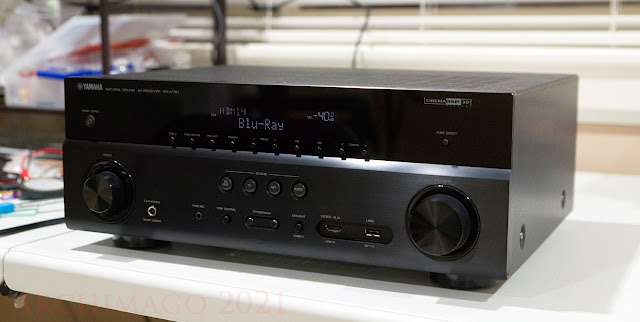 For this post, I want to have a look at the performance of my Yamaha RX-V781 as an amplifier. It's not new - I purchased this back in late 2016 to replace my Onkyo TX-NR1009 which I published on previously. Awhile back, I also looked at the pre-outs to examine the quality of this device's DAC.

This was an inexpensive receiver when I got it (as I recall, significantly less then US$700), being part of the "V" (Value) series from Yamaha, a step down from their "A" (Aventage) line. From the outside there's not much to look at, it's a black receiver with the usual buttons, knobs, and LCD screen to tell you the status. There's no swivel-open door to hide buttons like in more expensive models. It's a combination of plastic and metal exterior. Weight is not too heavy at 23lbs, mostly from the power transformer (looks like conventional E-I type, less expensive than toroidal but can provide greater capacity for size with potentially higher magnetic interference however).

The V781 is quite a feature-filled 7-channel amplifier capable of running 5.2.2 Atmos / dts-X, even compared to many of today's devices (see Yamaha specs here). What drew me to this model when I bought it was the fact that it had a full array of pre-outs so I could bring my own amps to the party if I wished.

Interestingly, even though over the years Yamaha updated these receivers with models like the RX-V385 and RX-V685, they never updated the "V78X" product line. My guess it that maybe the higher-end Value series might have been too close to the lower-end Aventages in terms of features and quality. For example the current Yamaha RX-A2A (~US$900) doesn't have a full complement of pre-outs, has more HDMI ins, no second HDMI out and quite similar to the Yamaha RX-V6A (US$650) already. 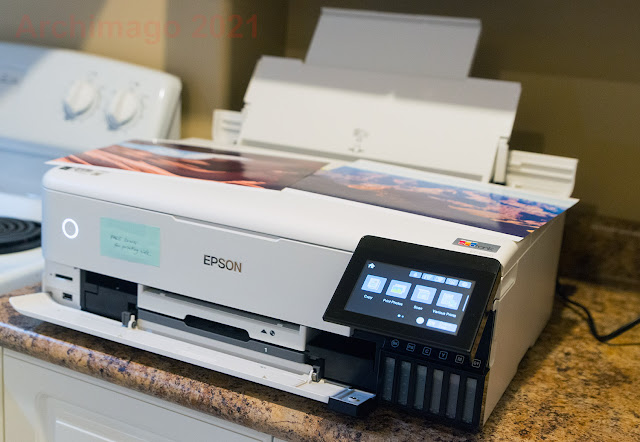 While for the most part this blog concerns itself with audio stuff, every once awhile it's nice to diversify into discussions of other tech products; over the years we've talked about TV tech, CPUs, and networking for example.

Whether in audio or computer tech, I like products that represent value. This probably will become more important in the years ahead due to inflationary pressures with possible slowing of technological innovations in consumer electronics.

A few years ago, I mentioned about the Epson ET-2550 (these days supplanted by the Epson ET-2760) for basic color printing. Of all the years of using printers, that device was the first time I felt ink jet represented good value. Since 2017, that printer is still going strong! Never had any issues with print head clogging, and it has achieved stable connection through the WiFi in my home and accessible to all computers within the network sitting unobtrusively in the basement.

In fact, I was so impressed that I simply had to jump at grabbing one of these new Epson EcoTank Photo ET-8550 units when they became available recently. This is the wider format 13" (ie. A3+ paper) model. If all you need is standard-width 8.5" then you can check out the less expensive EcoTank ET-8500. As the name implies, this is intended for photo printing with its 6 ink tanks as opposed to the 4 on the ET-2550/ET-2760.

Hey guys and gals. For this blog post, I thought it would be of particular interest to some to have a look at latency and audio interfaces. As you can see in the picture above, I pulled out my Focusrite Forte for this alongside the RME ADI-2 Pro FS.

Latency is simply the delay for something to happen after an instruction has been issued for that event. Computers, device drivers, the hardware are not instructed "real-time" down to a bit by bit timeframe, but rather act on "chunks" of data generally issued with some buffer to keep the pipeline flowing. The buffering mechanism is a major, but not the whole, factor in the latency effect.

There is a balance to be struck though. The larger the buffer, potentially the more latency, but the less likely we could run into issues with dropouts. The shorter the buffer, the lower the potential latency, but the more demand on the CPU to deal with making sure the buffer doesn't go empty, and likelihood that we could have audio errors if needs are not met on time. This idea of "strain" on the CPU is particularly relevant on digital audio workstations (DAWs) when all kinds of DSP like VST plugins are used in audio production.

For us audiophiles, we generally don't care too much about latency because normally we're just interested in the sound quality once we "press play" and so long as the audio starts reasonably quickly and is not disrupted during playback, then there's nothing to complain about. Latency by itself has no effect on sound quality (despite the claims of some, which we'll address later).