For those keeping track, the story of MQA has slowly evolved over the last few years. Initially, it was supposed to be just a technology incorporated into DACs that would take an encoded file (typically 24/44 or 24/48) and almost "magically" transform this data into the "original" high resolution (equivalent to 24/192+) sound while maintaining standard PCM playback compatibility. This was the case with the first products like the Meridian Explorer 2. Over the years, it appears that concessions have been made. Software decoding rather suddenly was introduced in early 2017 with TIDAL's support for MQA; branded as "MQA Core". At around the same time, DACs were classified as either "MQA Decoders" for components that can handle these 24/44 or 24/48 files start to finish (Meridian, Mytek DACs), and "MQA Renderers" which require the computer software perform initial "unfolding" to high-res samplerates (88 or 96kHz) followed by some kind of final processing to the sound performed by the DAC presumably to allow the sound to be more "accurate" to the studio production, or "authentic" (whatever that means). 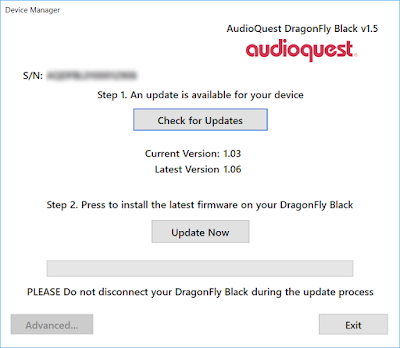 With the recent firmware upgrade to version 1.06, the Dragonfly Black DAC now belongs to this latter category of "Renderer". As far as I am aware, it is the first of these kinds of devices to be released without "Decoding" capability.

As I showed a couple weeks ago, I have in my possession one of the Audioquest Dragonfly Black DACs for testing. I'm actually borrowing it from a friend so it's not going to be in my possession for long... Long enough for me to listen and run some objective testing to see what the "deal" is.

I think it's useful to show these test results on the Dragonfly because AudioQuest clearly has a healthy advertising budget and promotes it quite heavily on audiophile sites with ads in magazines as well; as such it's a bit of a "standard" even though a number of other alternatives exist. For example, a few weeks back, I showed the measurements for the SMSL iDEA which I thought performed objectively amazingly well for such a small device although I had some issues with seamless connectivity to Linux / Android. As you can see in the image above, I have tested a few others of these kinds of  DACs already including the AudioEngine D3 measured in 2014, Light Harmonic Geek Out V2 in 2015, and also the previous revision Dragonfly v1.2 in 2014 which I don't have on hand any more (it was given as a gift to a friend).

A few weeks ago, I published the preview of the new Oppo Sonica DAC and noted some issues I ran into with unusual jitter and digital filter measurements. Thankfully, Oppo was able to correct the issues within a week with the beta firmware and I see that the official firmware incorporating the improvements is now out - Sonica-33-0511 on the support website (May 15, 2017 date).

With it becoming official, I figure it was time for me to run and post results of objective tests on the device. This should give us a taste of both the capabilities of this Oppo Sonica DAC as well as look at what the "latest and greatest" ESS Technology ES9038Pro 8-channel DAC chipset is capable of... Although I have not seen it specified anywhere, my assumption is that the stereo configuration in this device ties 4 of the DAC channels for each of the stereo pair. 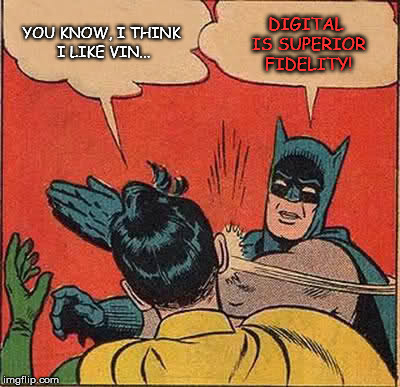 Alright... Let's not get worked up about the cartoon :-).

I know, the debate between vinyl and CD (digital) remains one of the greatest "wars" of the audio world; not that it should be a big deal IMO... As usual in most audiophile conflicts, there are many words spilled about the topic, but it is rare to see "data" or actual direct comparisons. For example, look at Wikipedia's entry for "Comparison of analog and digital recording" and we see no actual illustration to demonstrate differences.

Years ago, I wrote a little about this here (and I think it's only fair that I have a digital-preferring Batman cartoon). As you know, over the years there are all kinds of vinyl evangelists going around touting the superiority of LPs over CDs and digital overall (and vice versa although I'm not sure the digital camp is as evangelistic). Here's a nice example of all the awesomeness that is vinyl based on someone's opinion.

As I've said before, I agree that there are some great qualities about having an LP collection. So long as you have the space for the non-biodegradable collection, the beauty of the artwork is wonderful. It's comforting and collectable memorabilia. And likewise the sound can be alluring in the same romantic way. For some, the ritualization of the playback process can bring with it that sense of security and physical engagement as well.