MUSINGS: Increasing the Dynamic Range of compressed audio with DSP... (And is this why vinyl DR is higher!?) 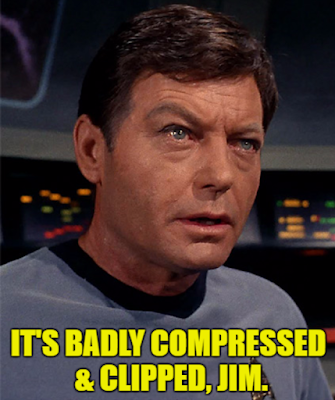 Sadly, the good doctor's diagnosis applies to too many of the recordings we listen to these days.

I mentioned last week a recommendation for July Talk's Touch album at the end of that post. There are a number of catchy and enjoyable tracks on there... However, if we put this album through the foobar DR Meter, unfortunately, we see an album with really nasty dynamic range compression - DR4. Yuck.

Hmmm... Is there any way to change that?

In the heat of summer, it is nice to get some time off to fix up around the house and do something that I typically take no pleasure in - rebuilding computers and reinstalling the OS & software! It requires a level of "Zen and the Art of Computer Maintenance" that I can only muster up every few years :-).

If you're like me, at home, you might have a little cadre of computers for work and personal purposes. As painful as it is, every few years, I'll update the OS, maybe tweak the hardware here and there (everything from cleaning up cables, vacuuming out dust, updating motherboard firmware and drivers, and the occasional refreshing of the heatsink compound). Updating a less "mission critical" machine like a HTPC or game machine (such as previously discussed) is not a big deal because in my view, that won't affect the others. However when I update the powerful main Workstation, I try to reuse the parts for some of my "lesser" machines; can't let perfectly good high speed CPU, RAM, and motherboard go to waste.

As I mentioned last week with the initial review of the SMSL A6 integrated amp, this is a versatile device. It features an AK4452 DAC first released in 2015 which though not "top of the line", does perform very well with a potential 115dB SNR and is part of the "Velvet Sound Architecture" range of "Premium" DACs. For those keeping track, currently, the flagship DAC from AKM is the AK4497, capable of 5-channels and rated at 128dB SNR; they call this series the "Verita" which competes with the best of the ESS DACs like the ES9038Pro previously discussed in the Oppo Sonica DAC measurements and review. By the way, another claim to fame of the AK4497 is that it has a "volume bypass" mode which allows the DSD data to bypass the internal delta-sigma modulator; a more direct processing path... As usual with new features in otherwise mature technologies, whether this is audibly better is probably up for debate.

Today, what I wanted to test out with the SMSL A6 are the RCA and headphone outputs from this device. As usual, along the way we'll have a peek at jitter results, the antialiasing filter being used, and check out the various inputs - USB compared to the S/PDIF variants of TosLink and coaxial.