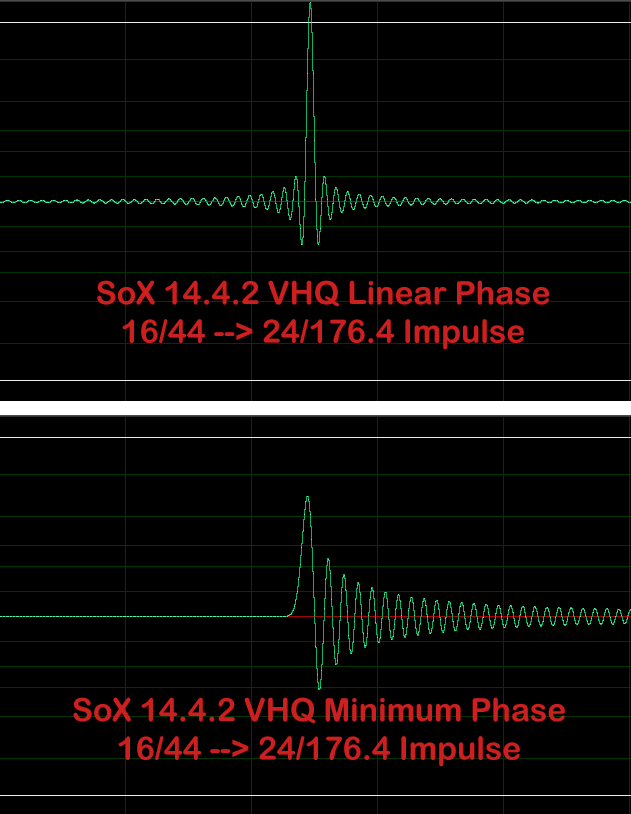 Ladies and gentlemen, audiophiles of all ages; you have probably seen pictures like the ones above many times in the magazines, posted online, etc. You know that many DACs these days feature the ability to adjust the way the antialiasing reconstruction filters are "tuned". I remember reading about and becoming fascinated by the different filters back in 2006 with Keith Howard's article on Stereophile. But it wasn't until around 2009 that I noticed Meridian started using minimum phase settings in their equipment like the 808.2 Signature Reference CD player. (I don't know if many other consumer audio devices used a form of the minimum phase filter before 2009; perhaps not as well advertised as Meridian?)

I enjoy visiting the Steve Hoffman Forums for perspective. I think it's probably one of the most balanced places to hang out at. Of course, as in any audio forum, there will be a number of heated arguments here and there, but overall, it's great to see a place where heterogeneous music lovers of various experience levels and beliefs can congregate, share tips, and get advice... It's certainly one of the more vibrant audio communities out there!

Recently there was an interesting poll on whether USB cable upgrades can improve a system's sound quality. Titled "The Great USB cable debate poll" (full disclosure, I took part and posted a comment as well), it ran from February 22 to March 8th before it was closed. In total, it received 415 votes, gathered 36 pages of responses and the outcome was:

About 1/4 felt that upgraded USB cables make a difference, and 3/4 did not. Surprised?

In my post last week looking at the various DSD-to-PCM converters, Solderdude Frans made a good suggestion... Let's have a look at the newer SACD plugin which has superseded the DSDIFF plug-in as the converter of choice these days for foobar. Also, it was suggested by Yuri Korzunov, the author of AuI ConverteR 48x44 to have a look at his converter package as well.

It is amazing how quickly another year has passed. About this time last year, I posted the first comparison of DSD Encoders and Decoders "shoot-out" of sorts comparing Weiss Saracon 01.61-27, KORG AudioGate 2.3.3 and JRiver 19.0.117 in terms of quality - both encoding and decoding fidelity using the RightMark Audio Analyzer software. The idea was to determine which of the three created DSD files from an original 24/96 PCM test signal and then decoded it back to 24/96 in a way where there was as little change in terms of distortion, flat frequency response, and lowest amount of added noise.

Perhaps not surprisingly, the expensive Weiss Saracon software sets the standard as the most consistent DSD encoder that resulted in the best output once decoded. The differences in decoding capability appeared to be very minor (questionable audibility between the 3) but objectively, both Saracon and JRiver 19 were on par and the free AudioGate 2 somewhat "noisier" in terms of the PCM output (I speculated this was due to stronger dithering algorithm).

Well, another year has passed in terms of software upgrades to DSD decoding and I was interested to compare the decoding capabilities as of late. We have brand new versions of JRiver and AudioGate now, plus I didn't get to test foobar with the DSDIFF plugin last year. Plus we now have DSD decoding on the Mac OS X available with XLD and commercially with DSD Master.