After the ethernet cable results last week and the absence of any difference, there was discussion about an extreme internet music server test. What if instead of maybe 100 feet of ethernet cable from server to player, we had thousands of miles of cables in between?

With help from Mnyb from the Squeezebox Forum, we were able to orchestrate a test to demonstrate the extremes of measured performance with the server system basically on the other side of the world. He lives out in Västerås, Sweden approximately 100 km from Stockholm. A direct distance of: 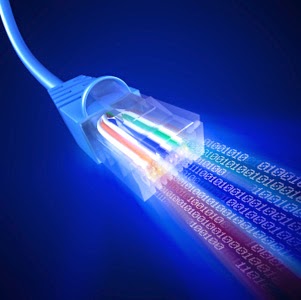 Hey folks, over the years, I have been critical of high-end audio cables... Previously, I have shown that RCA analog interconnects can result in measurable differences with channel crosstalk changes with long lengths. But the digital interconnects themselves do not result in measurable differences even in terms of jitter (TosLink SPDIF, coaxial SPDIF, or USB). Although my HDMI receiver's DAC isn't as accurate or jitter-free, different HDMI cables don't seem to make any measurable difference either. The only caveat to this being that a digital cable can just plain fail, in which case the distortion to the audio signal has a particular (annoying) characteristic which is clearly audible and not a subtle change (eg. a poor USB cable sound).

So far, I have not seen any further measurements to suggest my conclusions are inaccurate. I have seen audiophile reviewers and forum posters still claim digital cables make an audible difference and when questioned they provide lots of words but no actual empirical evidence. It has been awhile since I've seen any articles claiming objective evidence for cable measurements - haven't come across new ads or audiophile articles although of course I may have missed some.

However, as computer audio expands, there will be opportunities to "brand" more hardware as somehow "audiophile approved" and companies that make audio cables likewise will naturally capitalize on new lines of interconnects / cables... And as expected, cost of these things will be commensurate with "premium" products.

Which brings us to the concept of "audiophile ethernet cables" (see here also, and recent mainstream press exposure of the "madness"). Let me be clear. If I have issues with USB cables, or SPDIF cables, making any significant contribution to audible sound quality (assuming again essentially error-free transmission of data), there is no rational explanation whatsoever that ethernet cables should make any difference. The TCP/IP protocol has error correction mechanisms that allow for worldwide transmission integrity (otherwise Internet financial transactions should be banned!),  and is asynchronous so there is no temporal dependence on exact timing mechanisms (jitter not an issue with adequate buffer to reclock and feed the DAC). So long as the "protocol stack" is functioning as it should between the devices, there will not be any issue. Systematic errors causing audible distortion either means hardware failure or poorly implemented communication software. Therefore the expectation if we were to test or "listen to" different ethernet cables is that there would be no difference.

Since I like to make sure objectively, let us at least run a few tests to see if indeed evidence can be found to support the hypothesis.

A reader gave me a tip about the new Shadows In The Night album from Bob Dylan. The allegation is that the 24-bit high-resolution downloads of this album are in fact NOT true 24-bits as claimed!

To start, here's a video to show what the inversion-null should look like with a true 24-bit audio sample:

(Just a shortish post this week... I've covered much of this in the past.)

As I mentioned in the comments section of the previous post on HRA, there have been discussions recently again around the sound quality of vinyl compared to CD. I assume it started from this article "Why CDs May Actually Sound Better Than Vinyl" from the L.A. Weekly. Overall, I think it's a good article! Some excellent quotes from veterans in the audio engineering business like Bob Clearmountain and Bob Ludwig. We even have the pleasure of an interview with James T. Russell - the "father" of digital optical media. Folks... These people know what they're talking about, so do not take their comments lightly.

Despite the fact that there's nothing ground breaking in that article, it's no surprise that the vinylphiles are up in a tizzy. Michael Fremer has now dragged out an old 1996 article about "Does Vinyl Have Wider Dynamic Range Than CDs?" (the PDF in the article). Let's talk about this...