I currently have 3 AV receivers here at home. The Denon AVR-3802 is my oldest machine, purchased back in 2001 and being used in the living room for stereo playback. My newer Yamaha RX-V781 (2016) is currently in use for movie playback with Atmos/dts:X decoding. This leaves the Onkyo TX-NR1009 (2011 model) that I bought used in 2013 which has actually been sitting unused for the last few years mainly because it's an older HDMI 1.4 device which did not support full 4K/HDR/60fps switching: 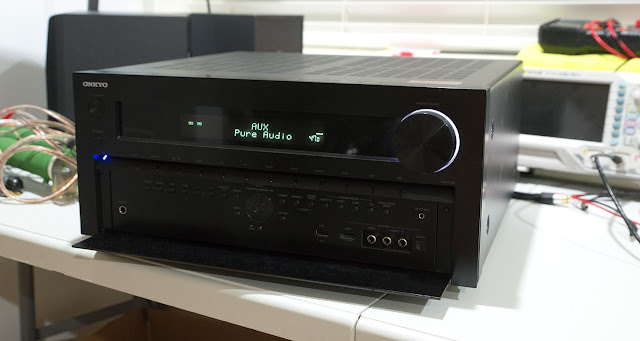 It's a shame because I think of the 3 receivers, subjectively this is probably the best sounding (no blind test done, just a suspicion), has the highest power rating (135W into 8Ω, 1kHz, 1%), THX Select2 Plus certified, can amplify 9 channels (9.2 decoding), and when new, was also the most expensive of the three. I'm sure at some point I'll find a use for this 41 pound monster - maybe if/when the old Denon breaks down :-).

I don't think anyone can fault the external build quality which also looks quite handsome. Onkyo did unfortunately have some electronics failure issues with this generation of receivers however and back around 2016, I sent this unit back to them for an HDMI board replacement (here's a thread on the issue a few years back).

For this post, I think it would be interesting to explore the sound quality of this device as a 2-channel amplifier (especially compared to the little Yeeco TI TPA3116 amp last week). It'll give us an idea of how well a good receiver could perform and give us a peek at a modern Class AB device sitting in the higher end of the consumer price ladder (Class AB receiver amplifier designs have not changed that much in the last number of years). These days a similar tier THX model with equivalent power would be the newer Onkyo TX-NR1030 and TX-RZ1100.

As I posted back in June of this year, we can get inexpensive little amplifiers these days based on Class D chips such as the TI TPA3116D2 (first released in 2012) which is what is inside the device here:

As you can see, I have a "Yeeco" branded device but these are produced in China and will come in a number of brands like the Nobsound NS-01G from Douk Audio, and other names like Fac"Mogu" discussed in this review and here's Z Review with an older version.

I mentioned in the previous post that once I have the amplifier measurement rig going I was going to have a look at the output from this little amplifier. I figure this would be a good device to start with using the MOAR amplifier procedure described last time.

While I'm not a huge fan of acronyms, sometimes one just needs to make something up for ease of reference; hence the "Measurement Of Amplifiers Rig" or MOAR ;-) for short to refer to this system which I'm going to attempt to characterize today:


As you can see, it's a conglomeration of hardware components which will allow me to collect amplifier measurements relatively quickly and I believe with good quality results based on my own testing over the last number of weeks (in fact I've been mulling over much of this for months even before the Linear Audio Autoranger was fully up and running). A hobbyist project to be sure, and one that audiophiles and DIY folks can come up with variants of and try out.

Of course, a measurement system isn't just about bits of hardware but also the software that can be used, the thought behind various tests we can run, and most importantly, a standard procedure that can be followed to ensure that devices are measured consistently and can be reliably replicated here on my test bench and elsewhere with similar equipment. As with most testing, I wanted to find a way to quantify performance, consider what is reasonably "true to life", borrow from tradition for comparison purposes, as well as emphasize aspects I find important. Hence this post will hopefully provide adequate details around a "standard battery" for what will be posted here in the days ahead. 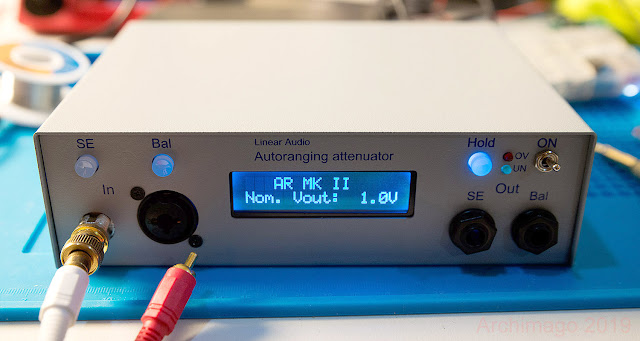 And the kit is now alive just in time for Halloween the other night. :-)

For those still wondering what this is, you can check out Jan Didden's video of the Autoranger MK I from 2017 and his demo of how it's used: