Updated Room MEASUREMENTS & MUSINGS on Importance of Sonic "Accuracy" and the Audiophile.

Chapter I: Another Round of Room Measurements...

Recently, I acquired some more LP's, got a few more IKEA Kallax storage units for said LP's and put up some art as well. Here are front and rear shots of the sound room the other day... 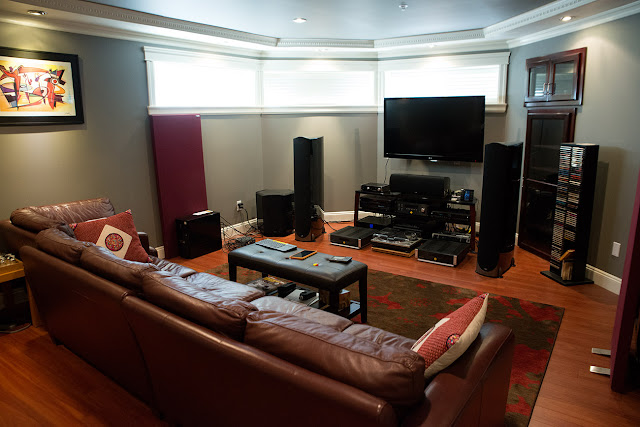 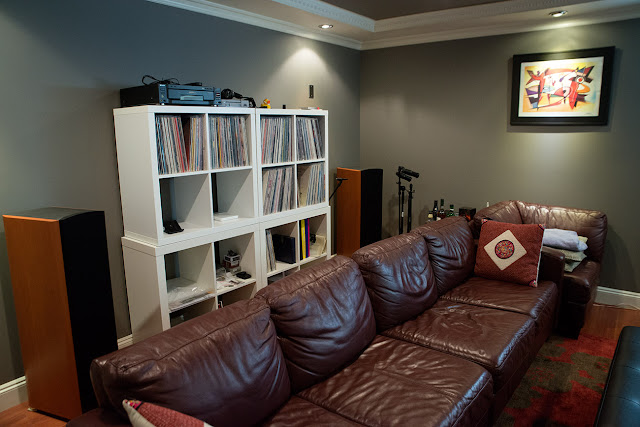 With the physical changes and reviewing my post from last year regarding the use of (((acourate))) along with suggestions made by Dr. Uli Brueggemann and Mitch Barnett (aka Mitchco), I decided that it was time to re-do the room measurements and see if I can incorporate the important suggestions - 48kHz sampling rate for the measurements, sweep range of 10-24kHz, and incorporation of the subsonic filtering at 15Hz. If you're wondering, the dimensions of the room are ~20' x 15' x 8' with a slight frontal tapering as shown; not a huge room by any means and not ideal dimensions but at least it's not squarish/cubish (here's a study on room dimensions and acoustics). It's in the basement of my house, built as a family media room with extra thick walls to reduce sound leakage when the kids are asleep at night (I pretty well can run the sub at reference levels with kids asleep upstairs at night so long as I close the door to the basement). The main speakers - Paradigm Signature S8v3's - are 7.5' apart up front, and the sweet spot is approximately 9' from the speakers arranged like an isosceles triangle. I make sure there is decent amount of space between the couch and the rear LP storage (>3'). [As you can see, I have the ~15-year old rear full-range Paradigm Studio 80v3's back there.]

For those following along, you're recall back in March, I purchased a Hardkernel ODROID-C2 Linux-based credit-card sized single-board computer; the hardware described in my preview. I loaded up and customized the machine with Volumio 2 (RC1) a couple weeks back. And now as promised, I'll be showing some measurements using this machine with my TEAC UD-501 DAC. (Note that there has been a new Volumio image update since my last post. The current version is "VolumioRC1-fix-2016-05-03-odroidc2.zip" found here. Only fixed some boot issues apparently.)

Before I begin, let's discuss what we're trying to figure out objectively here... It has been claimed by some that the USB interface (which the ODROID will be streaming through to the DAC) can be "bad". Supposedly, it's electrically "noisy" (of course a noisy fan and spinning hard drives are also very bad). And, this is especially "bad" with computer audio because computers are electrically noisy devices and will end up polluting the output from your DAC. Hence, by this reckoning, a general-purpose computer isn't supposedly a good thing to have doing high-fidelity audio duties. Furthermore, it has been surmised by some that power supplies can be problematic. Specifically, an inexpensive switch-mode power supply (like the one in the picture above) can be noisy and again, will have deleterious effects on the sound quality.

It has been said that devices like the recently released Sonore microRendu among more fancy audio streamers like the Auralic Aries line of devices can "sound" better because they reportedly take into account the various sources of noise and supposedly have optimized hardware/software. True or not, the price of such "audiophile" grade devices can be rather substantial especially when it's a device without internal storage and acts as a digital conduit to feed a DAC.