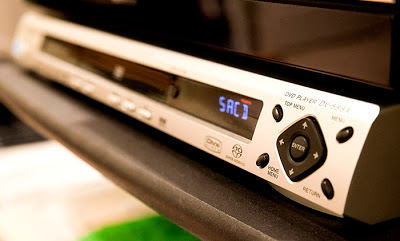 In the heat of the battle, it was nice that a few manufacturers gave us these "universal" DVD players that could handle both competing formats. Pioneer was one of them and in mid-2003, released to the world the very reasonably priced DV-563A (~$200). A year or so later, this model under consideration, the DV-588A was released. I remember browsing around Future Shop (owned by BestBuy these days) in 2005 to pick up this unit since my previous Panasonic DVD player failed on me. At <$200, I figured I couldn't go wrong since this would 'in a pinch' also play my small collection of DVD-A and larger collection of SACD's.

The innards of this player revolves around the MediaTek MT1389EE SoC chipset which graced many <$400 players back in the day (including the Oppo DV-981HD and Sony NS955 [chip apparently relabeled as Sony CXD9804R]). Although it has been said that this chip is capable of "PureDSD", I do not believe any of the lower priced units operated in this mode because multichannel and bass management were performed in the PCM domain. As a result, the 1-bit DSD (actually DSD64 for the 64 x 44.1kHz = 2.8224MHz SACD sampling rate) in these machines are converted to 24/88 prior to conversion by the DAC (supposedly a BB DAC is used in this unit).

With the advent of PS3 SACD digital ripping in 2011 and a firmware upgrade to the Pioneer, this unit joined the ranks of the relatively few SACD players capable of playing backup SACD-R's.

Given the low price, let's see how well this player measures... First I created a DVD-A with the RightMark test signals along with the J-Test to have a look at how it performs as a hi-res PCM unit.

Okay, so far not too bad for a budget player...  It can benefit from 24-bit audio with a dynamic range around 17-bits. Here's the 24/192 frequency response: 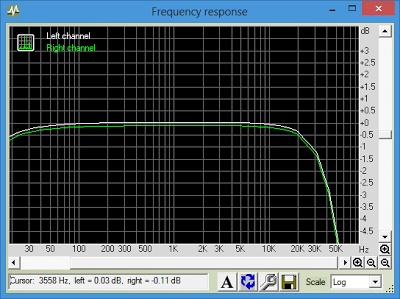 And here's the noise level (useful when we look at the SACD graph) - reasonably flat to about 50kHz: 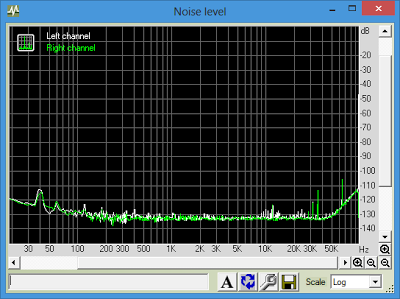 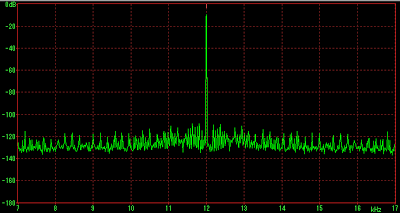 Quite jittery as you can see with a number of sidebands congregated +/- 1kHz around the 12kHz main signal.

Now as I mentioned above, this player is capable of SACD-R playback. So, I downloaded KORG AudioGate and went about converting the 24/192 PCM RightMark test and calibration signals and 24/48 Dunn J-Test into DSD64. With the help of a friend who's into this stuff, we got the tracks authored onto a SACD-R for testing. 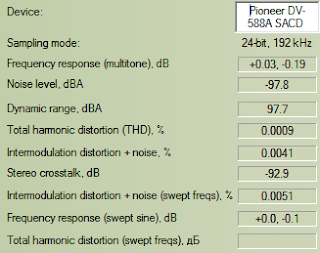 Lets have a look at the frequency response curve: 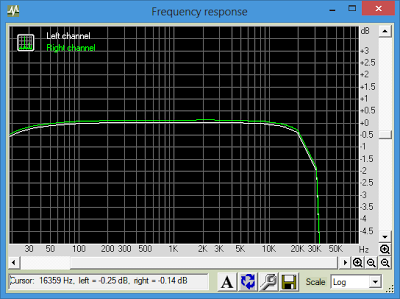 Not unexpectedly, the fact that it's resampled to 24/88 leads to an earlier cut off in frequency response than the DVD-A 24/192 spectrum above. I wonder if AudioGate is imposing a low pass filter starting around 30kHz to create that early steep drop off... 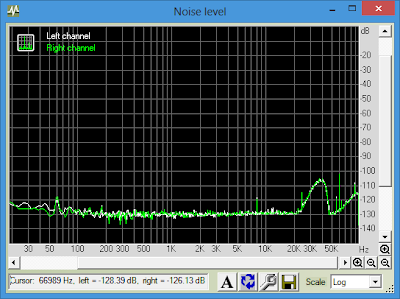 Note that extra "bump" at 25 to 44kHz thanks to the DSD noise shaping (absent in the PCM noise graph above) - remember that this is a log scale so it's all scrunched up in the corner. The fact that the noise gets truncated at ~44kHz makes sense for the 24/88 PCM conversion, that's why I wondered above if AudioGate is cutting off the frequencies of the test signal earlier at 30kHz.

Although the Dunn J-Test is invalid in terms of stimulating worse-case jitter in the DSD domain, for the heck of it here's the spectrum (again 24/48 test): 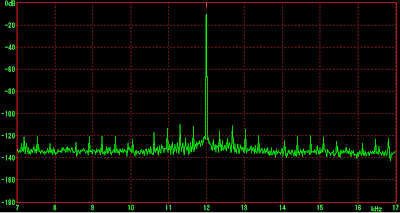 It's cleaner than the PCM graph above. Possibly the resampling from DSD to PCM done internally - like ASRC's - is cleaner than the direct PCM from the DVD transport (I don't think it has to do with corruption of the LSB jitter modulation tone since even a straight 12kHz sine wave looks very jittery in DVD-A).

Summary:
Hey, I got to measure a DVD-A / SACD player with my custom SACD-R & DVD-A disks :-)! I've often wondered how this old Pioneer compared in terms of SACD vs. DVD-A playback. Subjectively, I've always thought it sounded good but not exceptional. I never bought the same title on both DVD-A and SACD to actually compare how the two would sound. Even if I did, there would be no assurance that the mastering would be identical anyways. Although I have about 30 SACD's still, they're barely listened to compared to the computer music server and my Squeezebox players. The fact that I do have a dedicated SACD changer still (the venerable Sony SCD-CD775) also means I don't bother with the Pioneer for music playback the few times I spin a disk not for the purpose of audio ripping.

Overall, the objective data points to a 'fair' DVD-A player for its price and a 'mediocre' SACD player with dynamic range just a hair above that of an ideal 16-bit CD. Of course I'm converting my test tracks from PCM to DSD and then the player is re-converting back to PCM again so this will affect the sound quality negatively...  Furthermore, I haven't played with AudioGate enough to get a sense of how good it is as a PCM to DSD converter compared to something like Weiss Saracon which is much too expensive for the casual hobbyist. Nonetheless, since RightMark is measuring dynamic range at 1kHz (should be quite good for DSD64), it should still measure better than what I got assuming the digital data conversion was done competently and the 24/88 internal conversion algorithm is good.

The question of course is how well does a good "pure DSD" SACD player measure compared to something like this budget Pioneer? Can anyone suggest a good SACD unit to try which can play back SACD-R's?

[It would have been nice to convert 24/176 test audio to DSD rather than 24/192 due to the even multiple 44kHz sampling rate. Unfortunately the EMU-0404USB seems unable to handle this sampling rate well for me. Ideally of course, DXD 24/352 would be even better!]
Posted by Archimago at 23:08:00