I got a kick out of this article by Stereophile awhile back (2008):
http://www.stereophile.com/cdplayers/708play/

Imagine, audiophiles using an "archaic" (circa 1994) game console as a CD player for thousands of dollars worth of expensive amps and speakers downstream!

That Stereophile article reviewed the first PS1 version which was the SCPH-1001. Instead of that older model, what I have here is the slightly later SCPH-5501; said to be superior for audio by some PS1 aficionados!

Here's an interesting post from a fellow on the Steve Hoffman message board going by the alias "rhing":


I recently purchased a used Playstation1 Model SCPH-5501 from a local video game store for about $25. I bought it based on the fact that it uses the same Asahi Kasei AK4309AVM DAC as Model SCPH-1001. The most obvious difference between Models SCPH-1001 and SCPH-5501 is that Model SCPH-1001 is the only Playstation 1 with RCA stereo audio output jacks. For some people, this is important to getting the ultimate performance from a Playstation 1. Model SCPH-5501 outputs stereo audio through a 12-pin Sony A/V Multiport jack that uses an A/V breakout cable with RCA jacks for Right Audio (red), Left Audio (white) and Composite Video (yellow). In addition to the RCA jacks on the rear, Model SCPH-1001 also has the same Sony A/V Multiport jack. The benefit to using the A/V Multiport jack is that there are no cheap NJM2100 op amps in the signal path between the DAC and the output. The RCA jacks are connected through a pair of op amp buffers that can adversely effect the sound quality. In fact, most Playstation 1 audiophile modders bypass the op amp buffers, or use the A/V Multiport to get the same effect of better sound. Other improvements were incorporated in the later Model SCPH-5501:

1) An improved Nichicon SMPS that generated less heat that could distort adjoining plastic components such as the lid and chassis that could lead to mistracking or binding of a spinning CD disk.

2) Positioned the laser assembly away from the power supply to reduce heat damage and RFI noise.

He goes on comparing the PS1 with other gear he has. Good read. I can't verify the comments but it certainly sounds well thought out and worth considering. For those wondering, the AK4309 is a 1-bit delta sigma "bit stream" DAC.

So, without further ado, here it is: 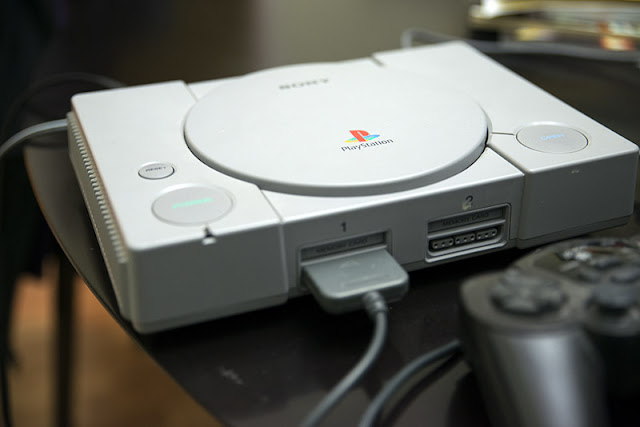 Notice the lack of RCA direct outputs at the back; there's a supplied multi-AV cable with RCA out instead. 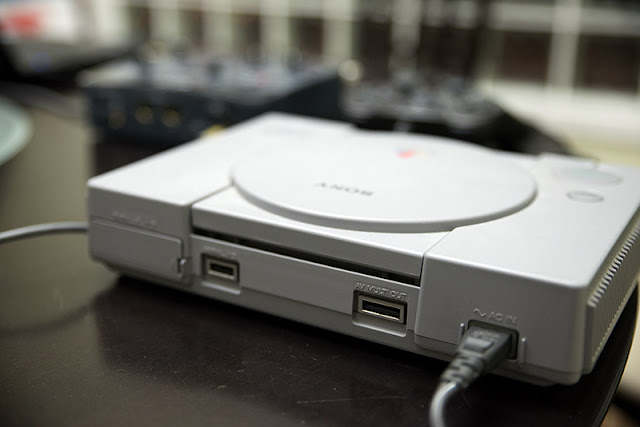 I used the stock PS1 power cable as per the photograph.

As you can see, for convenience in comparison, I included the 16/44 results for a number of the other DAC/streamer units I measured over the last while.

Compared to the rest, the PS1 is clearly outmatched in terms of dynamic range. These measurements indicate that it's capable of around 15-bit dynamic range. At first, I thought it may be the fact that this is a CD player with all kinds of electronics in there perhaps lowering the dynamic range. However, when you have a look at the AK4309 datasheet, indeed the rated dynamic range for this part is 'only' 90dB. 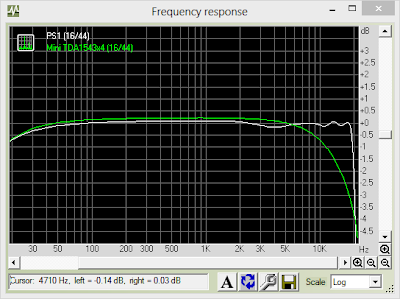 Some slight deviance from flat response curve up above 3kHz - unlikely to be noticeable through speakers and room interactions. Note the green plot for the Muse Mini TDA1543x4 for comparison to show what a typical NOS DAC measures like. Old school early 90's 1-bit delta sigma vs. NOS! :-) 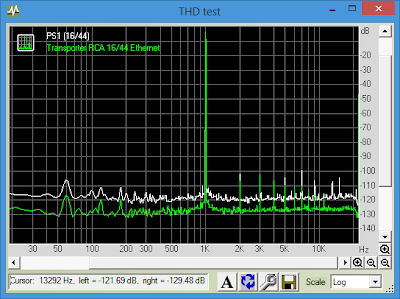 Since the Transporter uses the newer generation AKM DAC (AK4396), here are the THD plots in comparison. Obviously, the Transporter is capable of measurably lower noise level with a cleaner graph notably above 10kHz.

In comparison, the TDA1543 (NOS DAC) measures much worse with numerous harmonics: 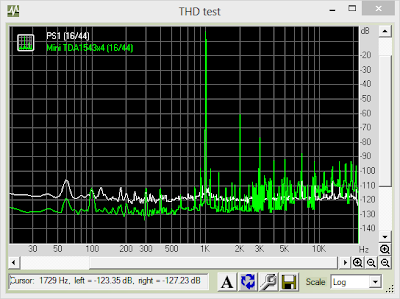 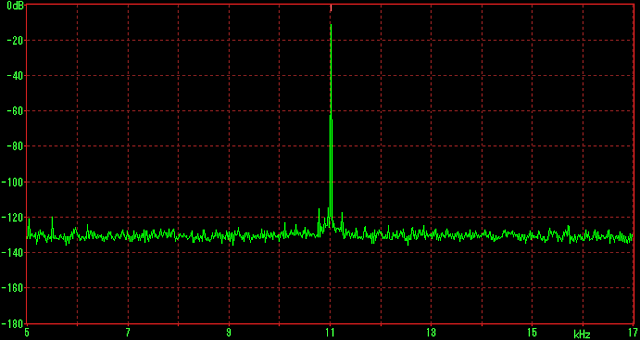 Conclusion:
There you go, the Sony Playstation 1 SCPH-5501 measured as a CD player. I can't say how it sounds compared to the even older "first-version" SCPH-1001 but as I quoted above, there are reasons to believe this version should perform better. Last night, for some late-night R&R, I listened with this unit through my AUNE X1 as headphone amp with Sennheiser HD800 headphones. Tunes on tap: Muddy Waters "My Home Is In The Delta" (downsampled Classic Records HDAD), Cat Stevens "Wild World" (2011 Analogue Productions), Nat King Cole "The Very Thought Of You" (2010 Analogue Productions), Akon "I Wanna Love You", eRa "The Mass", Joe Satriani "Crowd Chant", Jheena Lodwick "It's Now Or Never", Stephen Layton & Britten Sinfonia "For Unto Us A Child Is Born" from Handel's Messiah. They all sound great through the headphones. Nice details throughout, bass nice and deep on "I Wanna Love You", no accentuated sibilance with female vocals (that Jheena Lodwick track can be nasty), "The Mass" may have sounded a bit congested during the louder & more complex segments but really nothing to detract from enjoyment. I do not believe the measured 'limited' dynamic range negatively affected enjoyment at normal listening levels at all. Remember that ~90dB dynamic range is better than the majority of analogue sources.

Clearly compared to modern DAC's, the PS1 has inferior noise performance and concomitantly lower dynamic range. The other measurements like THD and IMD are respectable and jitter is not of concern. If we look at the TDA1543 DAC unit (DAC chip designed around the same era), the NOS unit has better dynamic range but with much more THD and IMD along with the typical high frequency roll-off at 44kHz sampling rate (of course you could feed the NOS upsampled 88/96kHz data to smooth this out). Between the two ultimately, it's one of subjective preference, especially for a "colored" DAC like the TDA1543 NOS (I've yet to measure a tube analogue output DAC). Personally, I'm of the "technically perfect" camp and would probably pick the PS1 over the TDA1543 even if a bit noisier - reasonably low level of noise like this is generally less objectionable than distortion.

I don't have any digital gear from the late 80's left, but by the mid-90's, "CD players" like this one sound and measure fine (though far from great in the case of the PS1 here)...