We are told - "everything makes a difference!"

Expensive power cables are an example of taking this principle more than likely to the extreme - well into the territory of the neurotic obsessive-compulsive. Some audiophiles claim there are very significant differences to be found by replacing standard cables like the common IEC connector varieties between the mains and one's gear. DIY plans are available on the Internet, and of course many enterprising companies have produced all kinds of cables to satiate those "believers". Like other cable claims, it's difficult to determine what scientific / engineering theory could account for these beliefs. While there could be some justification to use of heavy duty power cables for high-powered amps with dedicated circuits for example (very rare for home audio), why would someone need fancy cables for devices like DAC's or CD players where internally the AC is converted to low voltage and current DC to power the electronics? Furthermore, we all know that the electricity supplying our gear is connected by hundreds of miles of plain old non-"audiophile approved" copper cables of various diameter and quality.

In order to look for tiny differences, I'm going to try using various power cords with the ASUS Essence One DAC (note that my DAC is slightly modded with all LM4562 op-amps)... Let's see if there are any differences looking at the analogue output and changes to the J-Test jitter spectrum.

First, as usual, I had a look into my closet of cables to see what I have. Here are today's selection:

Cable A:
No nonsense generic freebie 6' cable that came with my old Antec computer power supply. Has the brand name "LINETEK" stamped on the connector. 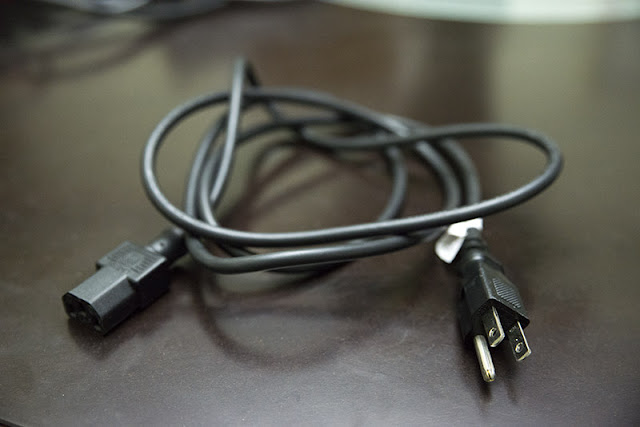 Cable B:
Notice the green dot on the plug. That means this is a higher quality "hospital grade" cable. Also 6', but it's about 25% thicker, and twice the weight of Cable A. Strain relief is fantastic. The metal wall plug prongs are more substantial and the ground prong is solid metal instead of hollow like for Cable A. Presumably the thicker diameter indicates better shielding. I know this particular brand of cable is being used in the local hospital's ICU department. If this cable fails during use, patients could die... 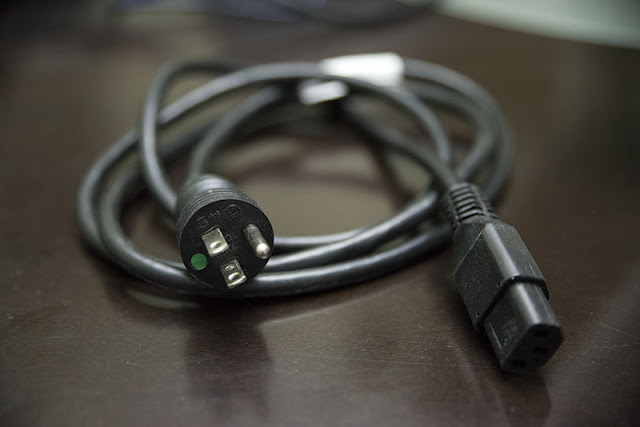 Cable C:
I looked around to see what was the absolute WORST power cable I could come up with. Here it is - total 56' long. Using Cable A, I connected it to a 50' yellow outdoors cable I used over the Christmas holidays for the outdoor lights. In fact, this cable has been used for this purpose for the last 5 Christmases at least, so it's been exposed to the dirt, rain and snow. The metal prongs in fact look worn and oxidized. In fact, this is so nasty that I took a picture of it out on the deck since my wife refused to have it indoors for more than a few minutes for testing :-). I tested it connected to the DAC pretty much looking like this tangled mess. Unless you think the last 6' of generic power cable can make a difference, the "performance" of this cable should unequivocally "sound"/perform terribly. 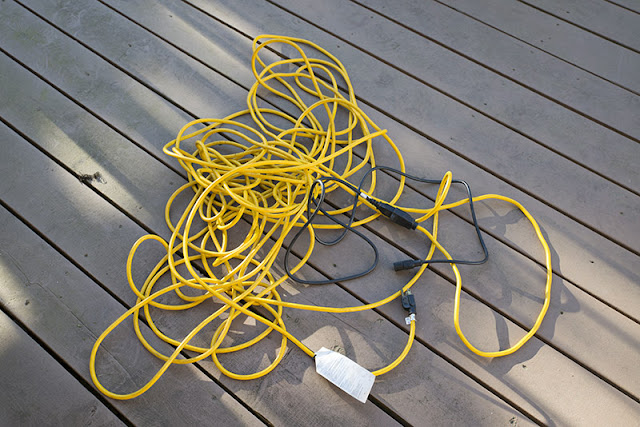 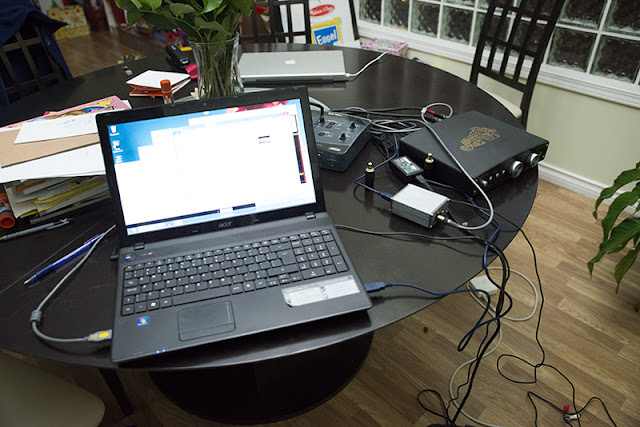 Note that I decided to use the CM6631A device for USB input and TosLink out (previously tested) instead of the native Essence One USB because I actually found less jitter this way. I noticed that the Essence One's USB input has a fair amount of low level jitter artifacts - not sure if it's a result of the CM6631 (non-A) chipset or the drivers in this configuration.

Pretty much identical...  Very small differences within the error range for each "run" of the test. 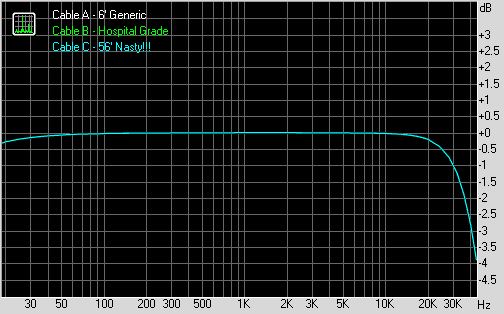 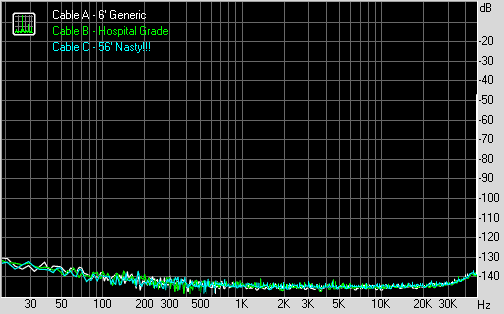 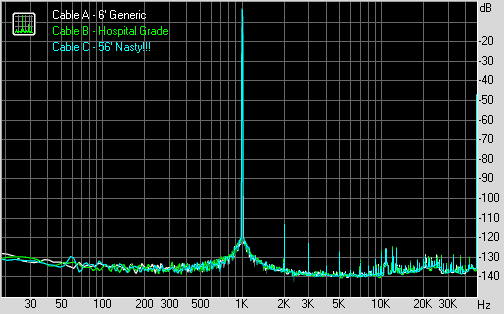 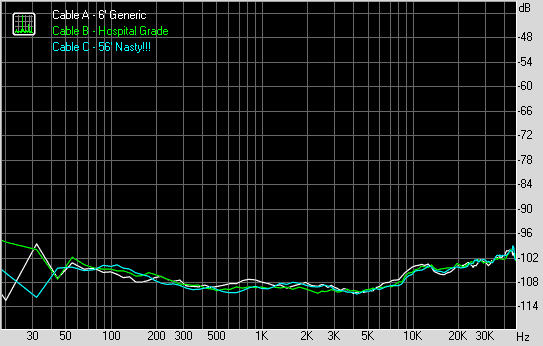 As you can see, there's nothing here to differentiate the analogue measurements from the DAC using the different power cables. 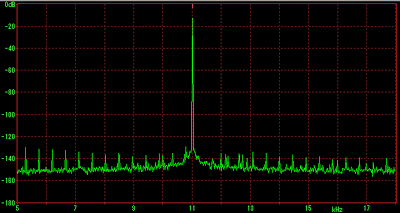 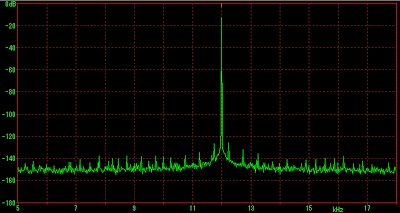 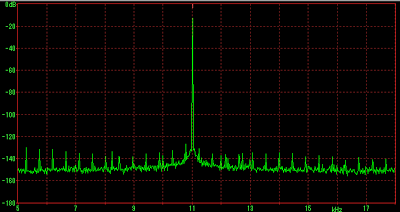 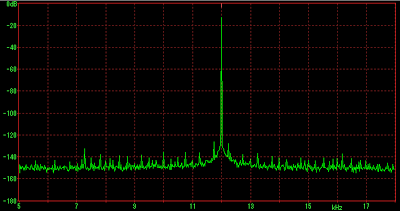 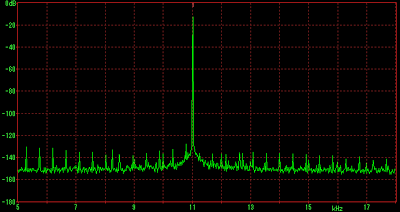 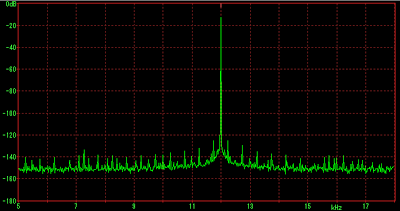 Again - no real difference folks. Not really that one expects any difference since it's unlikely that the DAC's internal timing circuitry could be affected by the AC input. Note that with the Essence One, we can actually see the 24-big jitter modulation pattern due to the very low noise floor below -140dB.

As usual, I listened to the audio output using the poorest cable configuration after I ran these tests and as I ponder what to write for the blog entry. Indeed, the sound was fine.

Tonight, I was listening to the Erich Kunzel & Cincinnati Pops' rendition of Tchaikovsky's 1812 Overture (Telarc 2001, SACD digitally ripped & converted to 24/88) with the Essence One powered by the nasty 56' length to the wall socket. It sounded good. By ~14 minutes into the track, we hear a multi-textured climax with church bells, choirs, brass, percussion and of course cannons. The complex mix was reproduced very well and rendered nicely with my AKG Q701 headphones - plenty of dynamics being pumped out into the Essence One's headphone amp.

Sure, it's possible that "everything makes a difference!" As in most things in life, the wise man needs to ponder the claims a little further to divine the truth. At least when it comes to power cables, I think the wise man can comfortably walk away from such claims of audible differences and realize that a decent IEC cable is all that's needed - at least for low power devices like a DAC.

As is my usual policy, I do not bother measuring high-priced cables - partly because I don't have any at home - but these posts are not about pointing fingers at specific companies. Rather I hope the measurements and comments stimulate thought. Note that I have "heard" expensive power cables over the years so am well aware of their "performance". As usual, drop me a note if you have good evidence to show otherwise...