We're continuing to see a push into the DSD domain with renewed talk of music release as digital downloads requiring the purchase of a DSD DAC to natively play (eg. recent Acoustic Sounds DSD releases). For now, I have already voiced some concerns about DSD including practical issues like the gross limitations of the file format itself. I demonstrated the noise characteristics for both DSD64 and DSD128 in my TEAC measurements. Furthermore, I have shown that there already exists many SACD's appearing essentially to be upsampled PCM from standard sampling rates of 44/48 kHz (remember, it's almost a given that any music we listen to created in the last 20 years has at some point been through a PCM stage except specified pure analogue recordings or those specifically recorded in DSD with minimal processing).

Some writers have voiced that even the process of upsampling PCM to DSD will imbue the music with some of DSD's beneficial properties, is this true? If so, what happens?

Well, thanks to ongoing advancement in the computer audio world, we can now easily have a way to listen to our PCM music as a converted DSD stream... Enter JRiver Media Center 19 and it's ability to stream PCM --> DSD64/128 in realtime to a compatible DAC. [Note that this should also be possible using ASIOProxy from foobar - not tried personally.] This will allow an easy way for everyone to listen for themselves what happens to the sound either as the original PCM or transcoded to DSD with the assurance that we're comparing "apples-to-apples" with the same mastering.

First, as has been my custom, let's start with some objective measurements to see what the DSD encoding does to test signals.

First, let's have a look at the 1kHz SQUARE WAVE off the digital oscilloscope (24/44 source): 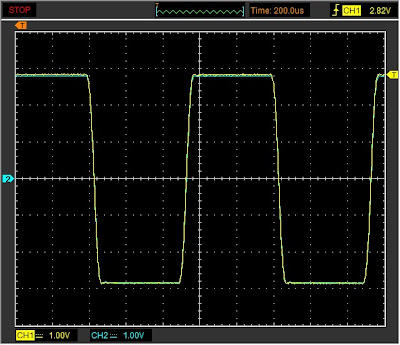 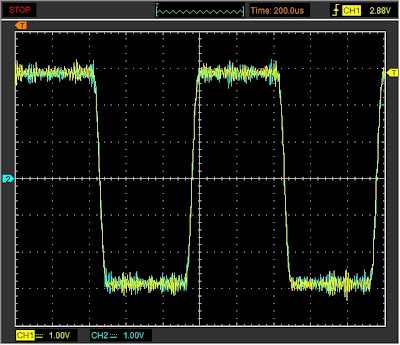 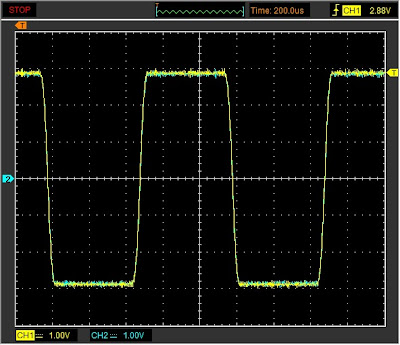 As you can see, volume is about the same with the DSD FIR3 filter on the TEAC vs. PCM SHARP; both output ~2.85V peak with the square wave. What is also very obvious is how clean the PCM is vs. DSD. Notice the extra high frequency noise for both the DSD64 and DSD128 traces, with the DSD128 clearly less noisy. No surprise, right? If you've looked at the objective results from DSD here and elsewhere, this is pretty "normal" for DSD. 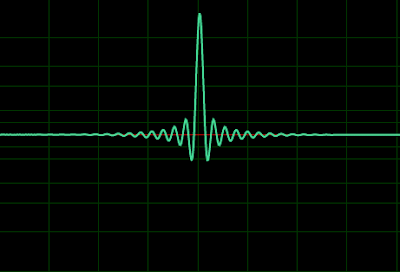 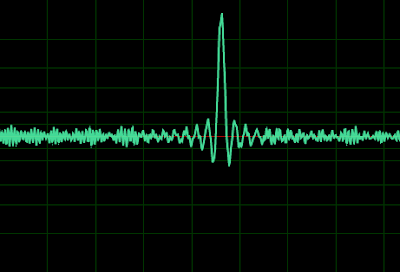 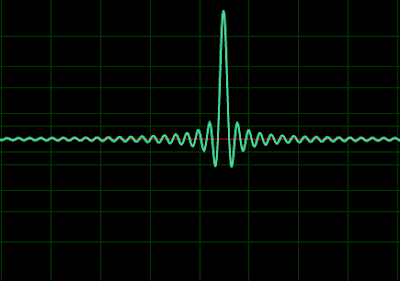 Noise is again very evident in this "zoomed in" impulse response measured at 24/192 especially from the DSD64 process. Although impulse response graphs can be excellent with MHz sampling rate (this is often a "talking point" in the DSD/Sony ad literature over the years), when resampling PCM to DSD, we're still hampered by the PCM signal's original sampling rate (eg. 44kHz). Evidently JRiver uses a typical linear phase reconstruction filter; hence the symmetrical pre- and post-ringing.

DSD64 realtime upsampling:
DSD128 realtime upsampling:
No meaningful differences between PCM and the DSD realtime conversion. This also means no evidence of worsened jitter with all that extra processing converting PCM to DSD in the computer at least based on the spectral output of this test (typically, this computer's AMD CPU utilization went from <5% with PCM to ~15% for DSD upsampling). DSD64 is obviously of enough resolution to accurately demonstrate the jitter modulation signal in the LSB for the 16-bit test.

These graphs of upsampled 24/192 test tones echo the results in the TEAC DSD Measurements back in May. I used KORG Audiogate to convert PCM to DSD back in May and it looks like the mathematical process in both JRiver and Audiogate are of similar precision. Within the audible spectrum, the PCM and DSD measurements are all very similar. A good indication of high precision in the conversion process. What is again evident is the noise once we get above 20kHz especially with DSD64.

As per the premise of this blog being "more objective", I'm not going to write pages on that which is experienced for oneself. However, I'll put down a few thoughts for consideration...

The DSD conversion process through this TEAC DAC does change the electrical output as seen by the objective measurements above. This alone means that it's real compared to the identical measurements found with different bitperfect software and digital cables previously reported.

There does seem to be a change in the perceived detail of the sound subjectively through the gear I listed... Note that I'm taking the liberty here to not subject myself to a blind test so I fully admit that I could be wrong on this :-). Furthermore the fact that since it's not an instantaneous 'flip', echoic memory is prone to be unreliable. With these caveats, my current feeling is that both DSD64 and DSD128 conversion adds a potentially euphonic characteristic to the sound. No, IMO, it's not a dramatic difference when listening volume is controlled. [For those using the TEAC DAC, remember that the default FIR2 filter for DSD is louder than PCM by ~2.5dB - this could of course be misconstrued as sounding "better" for DSD.]

What do I hear? As I mentioned in my previous post on getting DSD128 upsampling working on the TEAC, I think the sound is less "etched". There's a pleasant subtle added smoothness to the transients. I think many may describe this as being less fatiguing, maybe less of the "digital glare". I couldn't specifically put a preference on DSD64 vs. DSD128 but knowing the ultrasonic effects, it wouldn't take much to convince me that DSD128 is better since the ultrasonic noise is further away from the audible spectrum. However, if you believe that the noise itself creates euphonia, it's also conceivable that DSD128 would sound closer to PCM than DSD64. Maybe.

I listened to a few standard 16/44 albums in DSD128 like a first pressing Michael Jackson Thriller, the well recorded Al Di Meola Winter Nights, and Suzanne Vega's Solitude Standing. They all sounded great. Like I said, marginally smoother than PCM. I think poorly recorded harsh albums may benefit even more - for example Alan Silvestri's The Avengers score is mastered in "modern" overcompressed fashion with DR9 average dynamic range (not good for an instrumental soundtrack IMO). DSD128 upsampling seemed to make it more listenable for longer duration.

Vinyl rips (24/96) of Tracy Chapman's Fast Car and Whitney Houston's One Moment In Time sounded very nice as well... "Extra" analogue from digital from vinyl :-). Again, the inability to instantaneously switch between PCM-to-DSD makes it hard to A-B compare reliably.

Unfortunately I did not take a screenshot of the phase measurements, but it looked good. Listening to phase-effect tracks such as those encoded in Q-Sound like Def Leppard's Rock On (David Essex remake off Yeah!), and Roger Waters' Too Much Rope (off Amused To Death) nicely created the impression of spatial surround and depth. Whether that sense of depth is any better with the DSD upsampling is of course debatable.

1. PCM to DSD upconversion is a DSP process. The signal output is measurably different.

2. Noise shaping pushes the DSD quantization noise into the ultrasonic frequencies as expected. In DSD64 it rises above the noise floor almost right at 20kHz, and in DSD128 it starts around 40kHz. (I vote for pushing it up to 40kHz as less likely to cause distortion through the amp & speakers.)

3. Pre- and post-ringing is similar to standard PCM with upsampling using MC19's algorithm so this would not explain any audible differences.

4. The algorithm used in JRiver MC19 does a good job with maintaining classic measurement parameters like frequency response, dynamic range, and distortion from 20-20kHz  - basically this means the math is as expected and fits the DSD output profile. Results are similar to the KORG AudioGate software converting PCM-to-DSD.

I can't help but wonder if what's happening here is like tube amps and analogue playback (eg. vinyl). Objectively the DSD conversion adds distortion but the anomalies are not perceived as objectionable and in some material, the added noise and imprecision actually makes it sound less "sterile", "clinical", more "real" (conversely being in an anechoic chamber is disturbingly unreal due to the profound silence). It would make sense to me that some people could prefer DSD64 over DSD128 upconversion since DSD64 will give you more of that distortion. Even though the noise is ultrasonic in nature as measured off the DAC, nonlinearities in the playback system like your headphones and speakers (perhaps certain amps as well) could create audible intermodulation. Maybe for certain music, this could be especially beneficial.

Out of curiosity... For anyone out there with the EMM Labs DAC2X which upsamples to DSD128, it'd be great to have a look at what the measurements are from that unit! With all the positive press about how this DAC sounds (ahem... $15.5K), I have yet to see any measurements... I wonder what a 16/44 impulse response looks like for example to see if it bears similarity to what JRiver is doing. How about the ultrasonic noise with DSD64 & analogue filter strength? Does the EMM upsampling process for PCM result in similar frequency response pattern?

In any case, give this PCM-to-DSD process a try at some point when you can. If nothing else, at least to say you've experienced it... See if you can perceive a difference and/or judge if it's beneficial for yourself.

As I have said in the past, my intention for this blog has never been about making money. I have no formal relationship with any company so have no sales incentive and am not interested in making this some kind "publication" other than what it has been - a blog about my own journey in audiophilia with a bent towards finding answers using empirical/objective means. That remains my main interest.

Nonetheless, it's trivial to "flip" the AdSense switch. I would have no idea what Google tries to market to you, and trust that the layout won't be distracting (I've switched off some questionable types of ads like for dating sites or of a sexual nature). If it gets me a few bucks for my digital downloads for what I do as a hobby anyway, I'll be happy with that!