Mobile space is where it's at these days for major consumer computing innovations... New advancements in wireless communication, low power, more speed. Amazing just how fast progress is being made! It was only in early 2000 that the 1GHz barrier was broken for consumer desktop CPU's, 2005 was the first mainstream dual-core x86 CPU (both AMD X2 and Pentium Extreme 840). Now, we've got >1GHz quad-cores with 1080P screens on handheld devices in less than 10 years... (Yes, I know an ARM CPU isn't directly comparable to the x86, but still impressive nonetheless!)

For fun, I wanted to run the current Google Nexus' headphone output through the measurement gear to have a look at what some mobile folks are listening to... 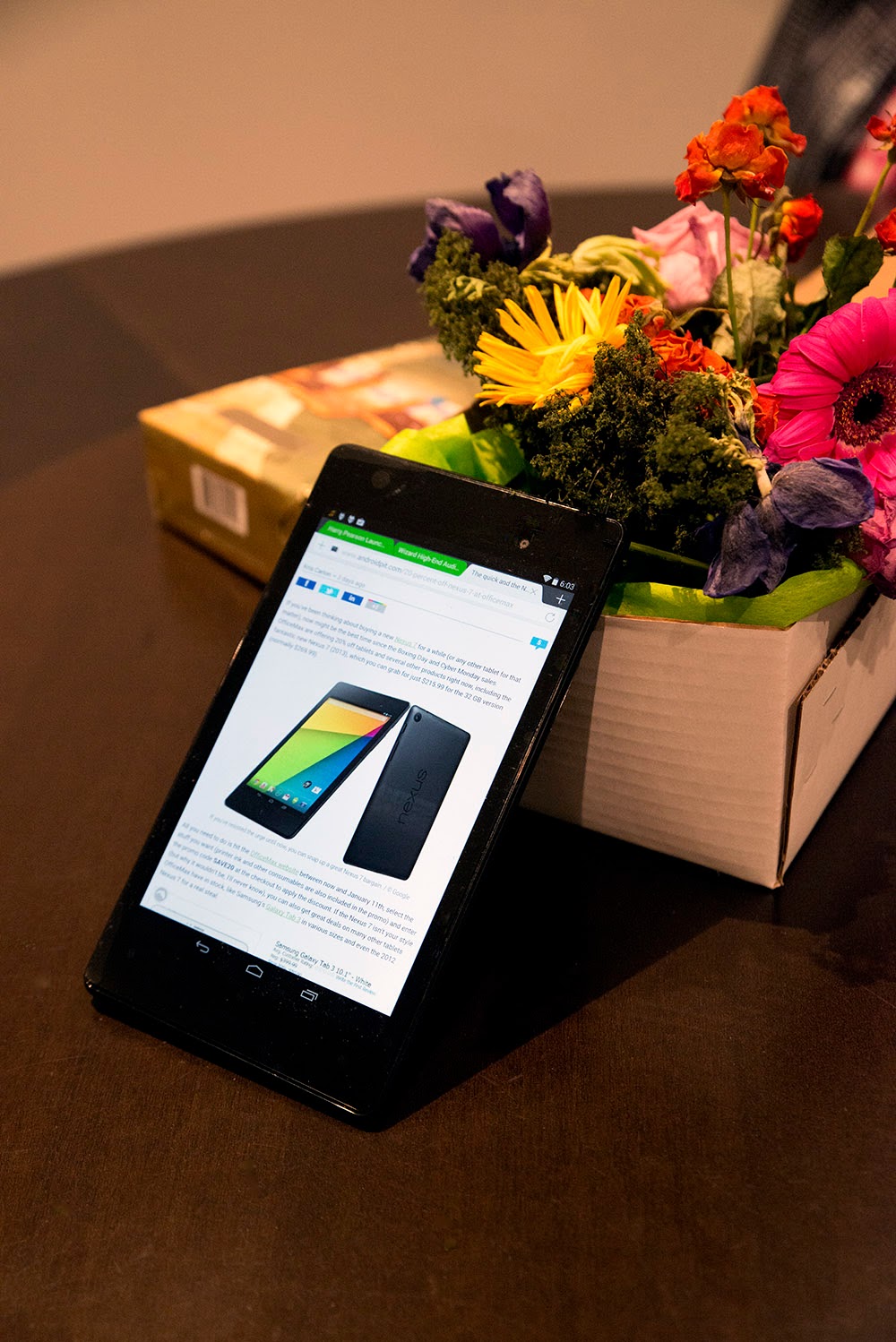 I'm really liking the smaller 7" form factor for tablets. This tablet acts as a fantastic controller for my Squeezebox Server using Squeeze Commander (my stereo PCM library streamed to Squeezeboxes), Gizmo for JRiver (all my DSD music to TEAC UD-501), and FoobarCon Pro for foobar2000 (multichannel PCM to ONKYO HDMI receiver).

It feels fast with a 1.51 GHz Qualcomm Snapdragon S4 Pro. Have had it for a few months, but I've actually never listened to the headphone output until tonight. Sounds fine with my Audio-Technica ATH-M50 in terms of bass weight and resolution. It can't drive the M50 loud so you'd want to use higher sensitivity headphones.

The nice UPS man dropped this off on Christmas Eve. I gotta say, compared to most of what we see in audiophile land, this is true value! Plenty of features, one of the fastest current mobile CPU's, great 1080P screen as well squeezed into 5". This phone has replaced my Samsung Galaxy S2. Some people have complained of poor battery life; I find that it's fine with Google Now turned off.

Like the Nexus 7 above, I didn't have a listen with headphones until tonight. Maximum volume seemed a bit higher than the Nexus 7 using the ATH-M50 which was a surprise. Again, in sounds pretty good. "Dead Already" off the American Beauty soundtrack maintained its usual bass impact through the headphones. Demanding loud tracks like "To Victory" off the 300 soundtrack wasn't as defined but not bad.

Okay, pretty straight forward setup here... Android accepts FLAC without issue, all that was needed was to copy over the calibration and test files via USB and off to the test bench. Of course, all DSP/EQ/bass boost off. I left the phone and HSPA+ data on for the Nexus 5 and WiFi on for Nexus 7 as the most likely situations in daily use.

Unfortunately I don't see any specs on the output impedance for either of these units so it's hard to discuss headphone matching.

Totally unfair, but I threw in a couple of 24/96 Squeezebox measurements on there - the SB Touch which represents a good upper level consumer device, and the Transporter which is in the audiophile league of audio performance. 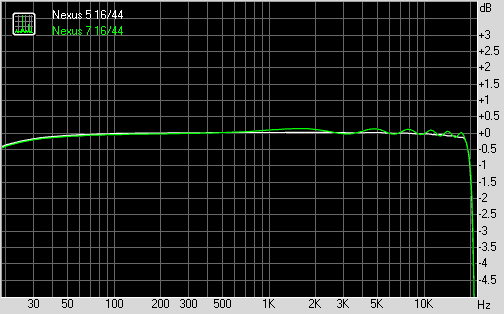 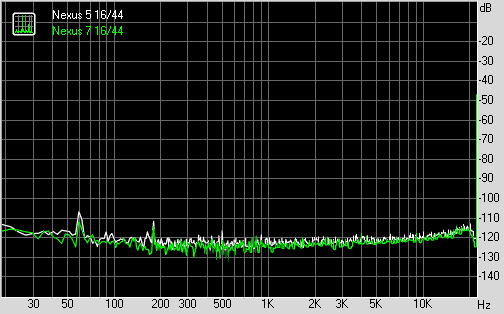 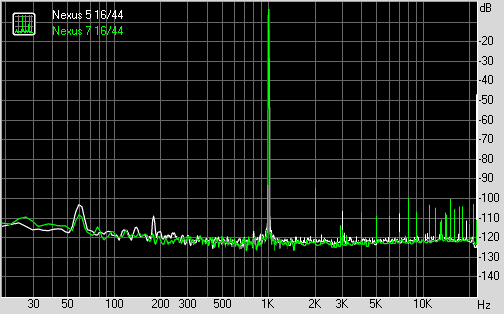 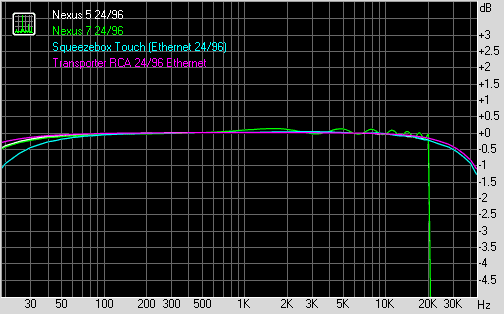 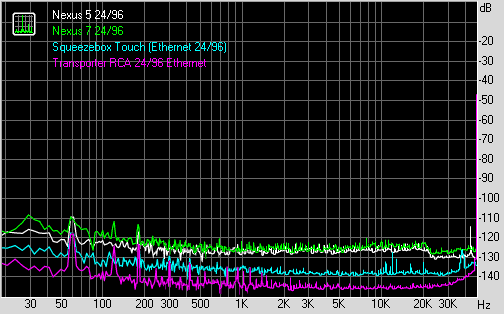 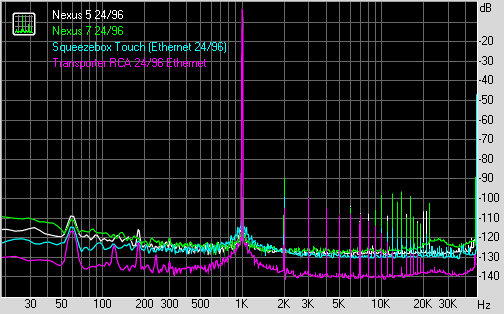 Well, there's not much surprise here. The built-in DAC's on these devices are limited in fidelity. The DAC circuitry is integrated into the tightly packed SoC which includes the CPU and GPU, situated in close proximity to wireless communication hardware for WiFi, BlueTooth, G3/HSDPA/LTE transmission...

Having said this, I was actually a little surprised to find that the smaller Nexus 5 phone performed a little better than the Nexus 7! The frequency response was more even and there was less harmonic distortion found... Evidently, it's not the size that matters.

Neither unit could benefit from 96kHz sampling rate - looks like it's downsampled to 44kHz.

Although neither device could deliver beyond about 16-bit dynamic range, it was interesting to find that 24-bit data resulted in slightly lower noise floor (you can see this easily with the J-Test graphs). Interestingly, the jitter modulation pattern was visible with both devices for the 24-bit J-Test suggestion high jitter levels (but really, who cares?).

Obviously, both the Squeezebox devices measure and would sound superior to these portable units.

I've found it curious the recent developments in smaller audiophile gear. Those small USB DACs for example seem to preform reasonably well - the AudioQuest Firefly, Meridian Explorer both look good and measure well for those with small desktop space or want a high quality DAC on trips. It's quite clear the success of the Light Harmonic Geek speaks to the market in such devices.

What I'm not so "bullish" about are those "audiophile iPods"... Stuff like the HiFiMan units, or the Iriver Astell&Kern (oh yeah... I almost forgot about the Pono - supposed to come out in early 2014 so says Neil Young - I'll believe when I see it!). I find it hard to consider portable players as anything other than convenience items. They're meant for headphone use of course, but even if they performed excellently (it looks like the Astell&Kern AK100 measures well), what's the point? The more resolving headphones that can benefit like the Sennheiser HD800 are open design with poor noise isolation and I cannot imagine many folks crazy enough to walk the streets or take the subway with them on. To make matters worse, the high end headphones usually require more power and that's going to really drain battery life assuming the "audiophile iPod" even has the oomph to provide enough volume in the first place.

Bottom line... For the purpose of the commute, these measurements of the Nexus 5 and 7 appear totally fine assuming you have a good pair of efficient headphones. From my collection, volume was adequate with the Apple white earbuds, JVC HA-FX40 IEM, Sony MDR-XB500, Koss PortaPro, but not really good enough for the Sony MDR-V6 or aforementioned ATH-M50 in a busy environment... Don't even bother trying open headphones like the Sennheiser HD800 or AKG Q701. However, surprisingly the Nexus 5 drove the Audio-Technica ATH-AD700 better than I thought.

Addendum: (January 29, 2016)
A number of years since measuring the Nexus 7! However, I started doing some impedance measurements... Using 20-ohm and verified with 300-ohm loads, 1kHz sine wave, I'm seeing an output impedance reading of 33-ohms. Not good but much lower than that of 100-ohms reported here!