Under immense market forces and thin margins for the majority of consumer electronics, it is no wonder that the specialist brick-and-mortar stores have gradually disappeared over the years. Big box stores are everywhere these days it seems (Best Buy and Future Shop here in Canada), and the proliferation of internet "stores" like Amazon has clearly taken centre stage for the consumer on the prowl for the best deal available. In some areas like the AV receiver market, I believe market forces have clearly resulted in marked improvements over the last 10 years in sound quality and meaningful features representing great value (think HDMI support, room correction, proliferation of lossless formats like TrueHD and DTS-HD MA). For audiophiles, I believe the main hardware developments in the last 10 years have to do with the quality of external DACs and software for better integration of computer audio into the sound room. The ascent of Class-D amplifier technology has been substantial as well but I doubt many audiophiles see a need to migrate to these amplifiers purely by virtue of this characteristic (unless of course you need higher efficiency, smaller size, cooler operation, etc...). Likewise, speaker technology has advanced especially in the material sciences used for drivers, but I think it's hard to justify new purchases based on this factor since there are so many other variables in the overall sound quality (like your room!).

I don't blame the small audiophile stores for pursuing to sell gear that have big mark-ups. Things like cables easily come to mind and it's certainly in their interest to promote these products and give them ample "rack space" for potential customers to peruse especially if there are manufacturer incentives - I just hope there is balance between the concept of aesthetics and sonic performance being presented. Likewise, magazines have to sell copy and attract advertisers, what other option do they have? And you can bet again the power of the manufacturers/advertisers in promoting products even if said product is of unlikely benefit for the customer. Without adequate financial viability, there is no business.

In Vancouver, there are probably only about a handful of hi-fi stores left where you can even have a hope of sitting down to listen in anything remotely resembling a decent listening room. Thankfully they still do exist and on occasion, it's nice to visit to check out (and of course purchase) the products, perhaps demo the exotic gear, and interact with knowledgeable salespersons (ok, salesmen - who am I kidding?!) who clearly show a passion in the hobby and in what they sell.

So, on a relatively cooler Saturday morning last week, I headed over to Hi-Fi Center (along Seymour just north of Dunsmuir) to have a look and listen to one of the most recognized speakers ever. I, like many of you probably have seen pictures of the Bowers & Wilkins Nautilus speakers over the years but had never actually heard one. 2013 was the 20th year anniversary of this flagship product from B&W so they've been doing a tour through a number of cities since last year and it was finally time to hit Vancouver. The well done presentation with Q&A was made by Murray Cardiff, Canadian National Accounts Manager for B&W.

For those who may not have looked into the specs and history, here's the deal with the Nautilus (I haven't seen any formal detailed review/measurements to date):

- First released in 1993 - no substantial change to the design / sonic characteristic since. Check out this video, and part two for more (also check out the epic background music)! I don't know how many speakers can be said to not at least have a "Mark II" by now. According to Murray, about 4 units are produced per month for sales worldwide; not surprisingly many to Asian countries. Manufacturing facilities in UK and China.

- Current list price in Canada - CAD$70k a pair (includes external crossovers discussed below). I wonder whether there has been any price appreciation; I think the list price at release was ~USD$60k.

- The shell of the speaker is made of a composite material. Each complete speaker package is about 200lbs based on the specification sheet - evenly split ~100lb for the speaker itself and the granite base it's "standing"/bolted on. They stand (only) about 4 feet tall.

- 4-way driver configuration - 12" (300mm) bass driver (with characteristic mollusk shell spiral tube), 100mm lower mid, 50mm upper mid, and 25mm tweeter. Notice the tapered "transmission line" behind the upper 3 drivers. They're absorbent-material filled terminating with a small opening in the rear. Frequency response widely quoted as -6dB from 10Hz to 25kHz. Crossover points: 220Hz, 880Hz, and 3.5kHz. The speaker impedance is rated 8-ohms, no specification provided for sensitivity (somewhat meaningless anyhow in a set-up like this with external crossovers and separate amps as discussed below). 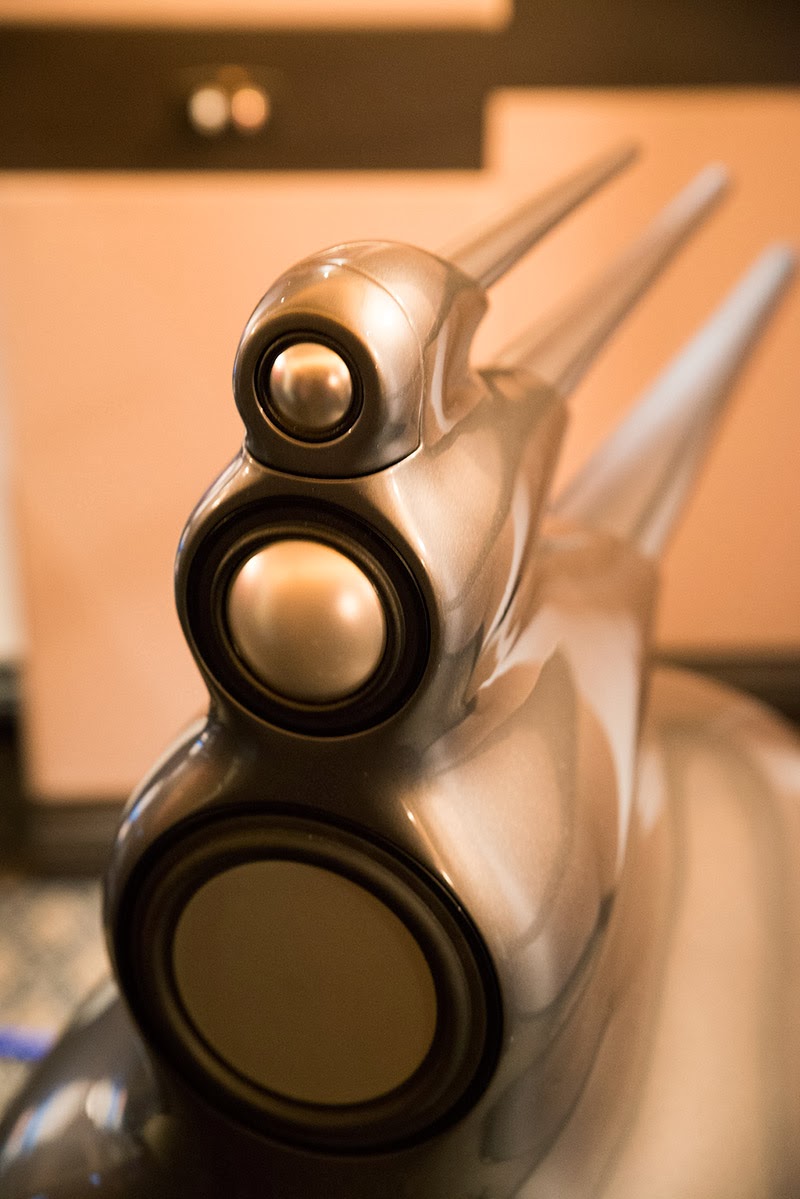 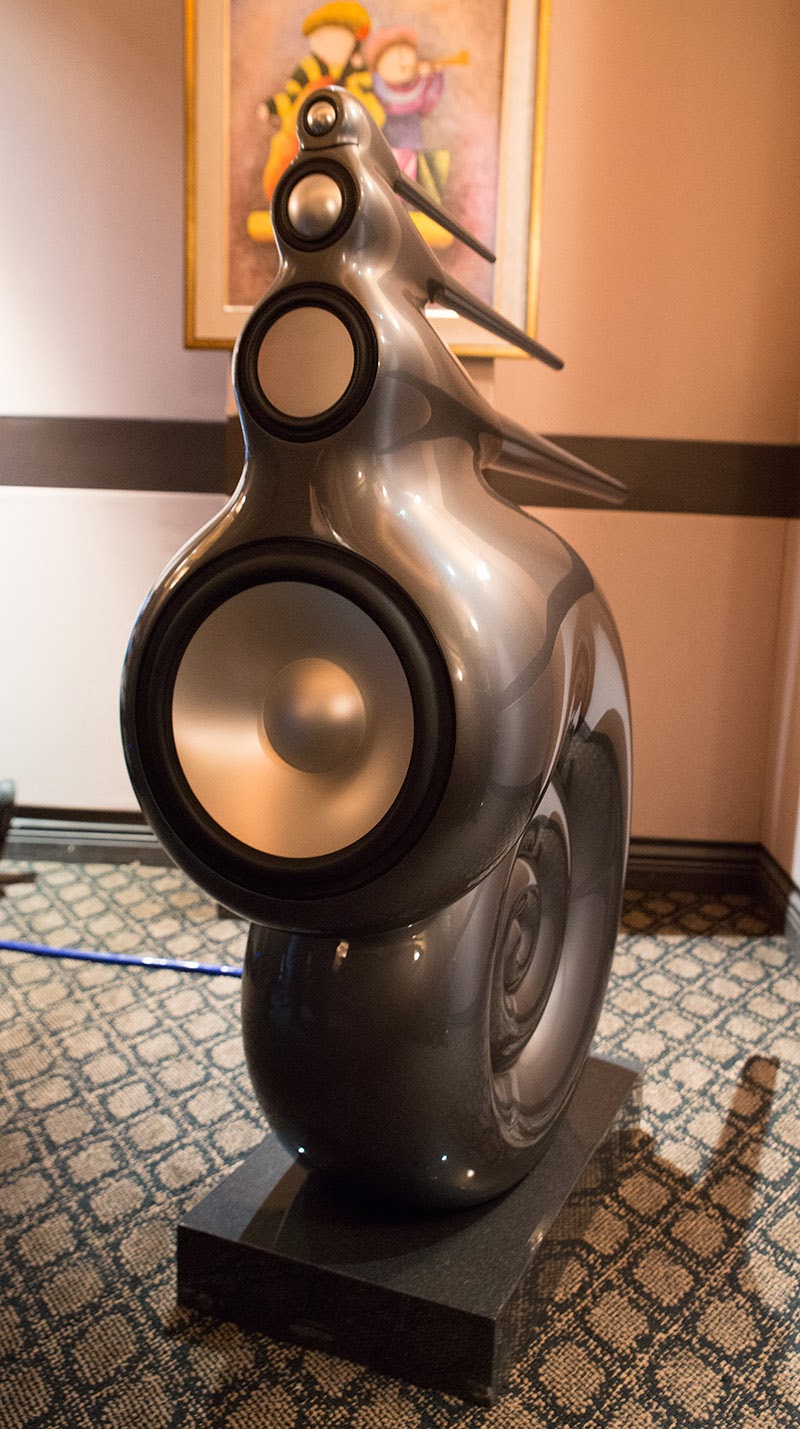 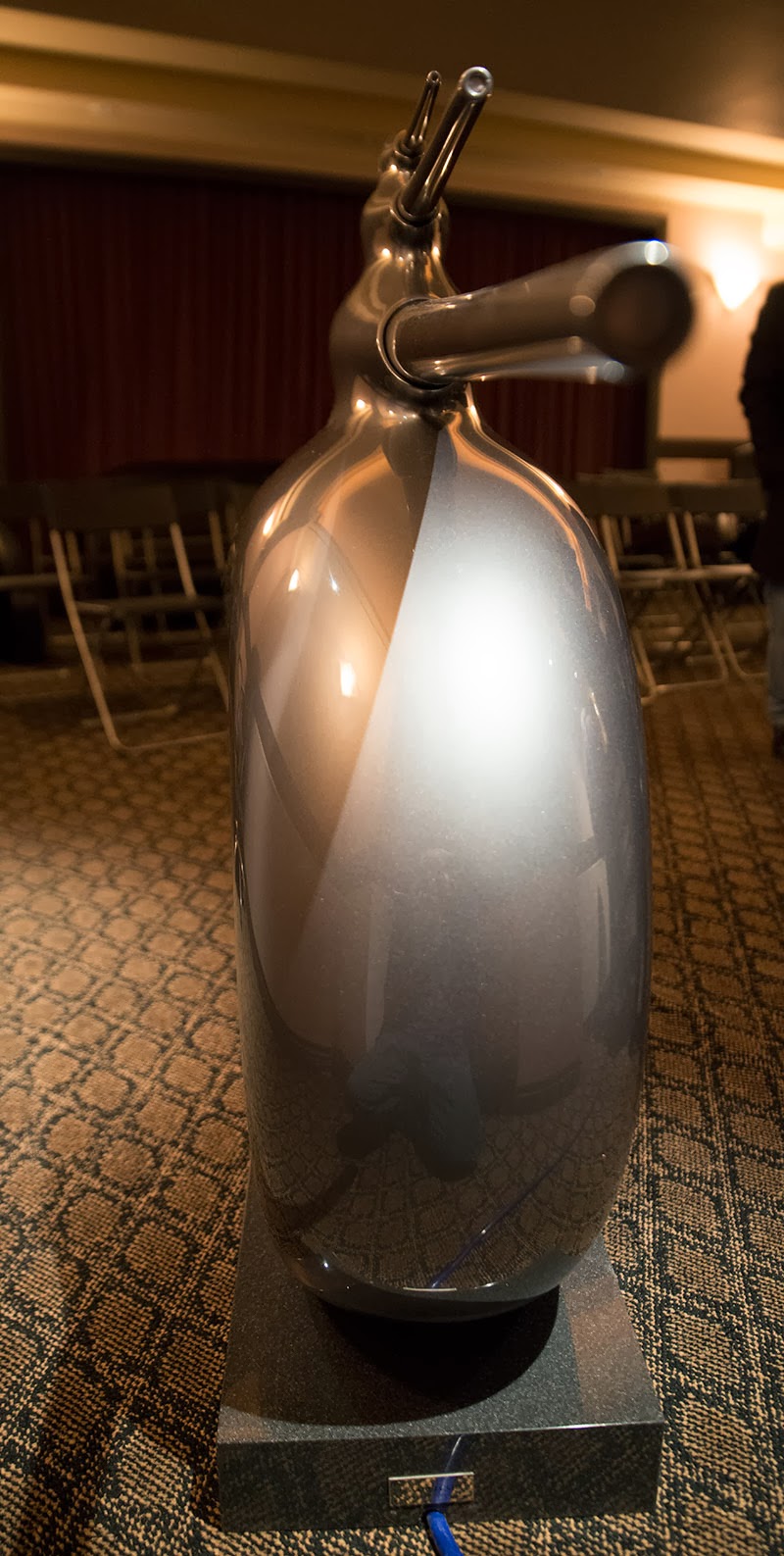 - All driver domes made of aluminium. This gives away the >20-year old design from the perspective of material sciences.

- There are no internal crossovers for the 4 drivers. You see the non-detachable blue speaker cable coming off the base. Another clue to the 20-year old design is just how thin the cable appears to be for something that contains 4 pairs of wires; a pair for each driver. The wires themselves are multi-stranded silver, and examining them closely, I don't think they're thicker than 16AWG and come in a standard 10' length (30' length also available). Of course this is technically not a problem at all for such a short length of speaker cabling but might surprise those who expect garden hose sized wire gauge for high-end gear!

- External active crossovers connected between the pre-amp and amplifiers. I presume the technology inside hasn't been upgraded since 1993, so not likely DSP-based digital crossovers. (In fact I hope not given the state of digital converters back in 1993!)

For the demonstrations, Murray used a combination of standard 16/44 and some hi-res played off a MacBook Pro through a full Classé (owned by B&W Group) pre-amp / stereo amp rack: 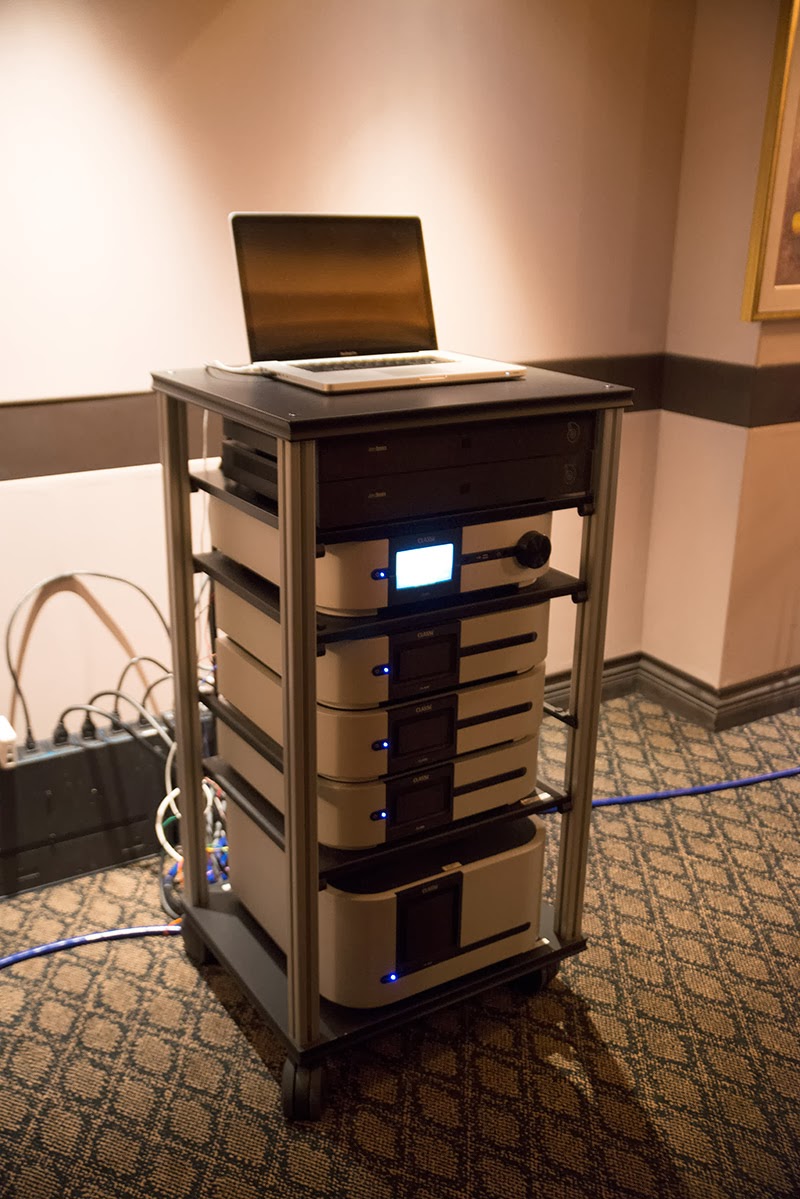 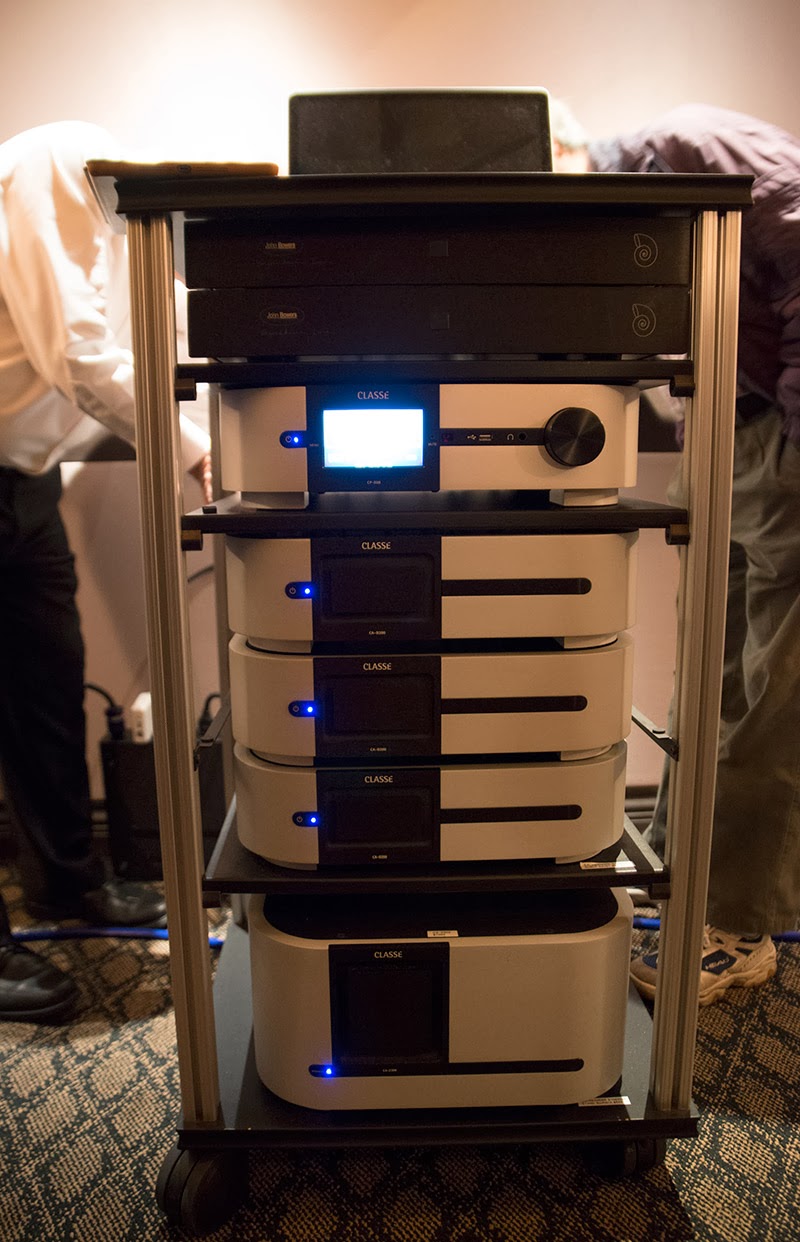 You see the black 2-box active crossover just below the computer. Below that with the LCD screen is the Classé CP-800 preamp which functioned as a USB DAC for the MacBook (it got a good Stereophile review, ~18-bit measured dynamic range, very low jitter). Below are 3 stereo class-D CA-D200 amplifiers, each 200Wpc powering the tweeter, upper and lower mid drivers. Obviously that stacking arrangement highlights a major benefit of the class-D amps - they stay cool. Finally below is the large class-A/B CA-2300 amplifier delivering 300Wpc into 8-ohms for the Nautilus woofer - I noticed a good sized fan on the back which stayed quiet.

Unfortunately, I was not able to play a CD I had brought with familiar tunes. Nonetheless, there was a good selection of music on the Mac already and the demonstration ran through a selection of familiar music - Paul Simon (from Graceland), Sting (from The Last Ship), Aaron Neville (from Warm Your Heart), Lang Lang (Rachmaninov No. 2), Rose Cousins (Canadian girl from Halifax), Beatles, Daft Punk ("Lose Yourself In Dance" off Random Access Memories), Oscar Peterson (We Get Requests). There were also a number of classical pieces I wasn't familiar with.

As usual with these demos, it's very hard to judge the sound given the importance of the room and the music used. On the whole, it sounded very nice. Good frequency reproduction from top to bottom. The upper end was very detailed and it was easy to discern low-level details including tape noise on analogue-sourced tracks and things like musicians taking breaths during classical performances (if you listen for such things!). I'm still a believer in a good subwoofer to tighten those lower registers however. Unfortunately, no hip-hop or rap was on offer in the demo so it was difficult to determine just what isolated beats down at 20-50Hz would have sounded & felt like. Another nice quality was the fact that the system could be pushed to high levels in a moderate sized room without a hint of strain with peak transients.

I was struck by the soundstage. The stereo effect was good even somewhat off center and this set-up certainly conveyed good horizontal and depth dimensions. I've seen comments from Nautilus owners describing excellent sound due to minimal rear reflections and folks placing these speakers against walls and other reflecting surfaces. Some of this may also be a reflection (pun intended) of the external active crossovers doing an excellent job with subtle parameters like time/phase alignment.

I heard a few of the attendees mentioning that the sound was fatiguing... Well, what can one expect when a good amount of the demo music was dynamically compressed?! Seriously, IMO, if these speakers did not convey the harshness of some of the tracks, then there'd be something wrong since that's just what the recordings sound like. Having said this, I did wonder if there was a bit of "ringing" from the aluminium tweeter which may accentuate the fatigue effect in some of the tracks (especially synthetic material like the Daft Punk)... I cannot be sure of this, just an impression. Obviously B&W has advanced over the years to using diamond tweeters while other companies like Focal, TAD, Magico, Ravel and Paradigm Reference are using pure beryllium to achieve higher breakup frequencies significantly above the audible spectrum. I suppose the use of class-D amplifiers could have an effect (likely not) - just don't tell me silver speaker wires sounds "bright" unless there's evidence of such a thing :-). B&W recommends at least 100W for these drivers and given the amplifier demands, I cannot imagine many folks running these with tube amps. I suppose NOS DACs and various upsampling DACs with rolled-off filter settings could tame the upper end at the expense of accuracy of course.  As I mentioned earlier, I have never seen a full review on these speakers and would be very curious what measurements look like.

After the Nautilus demo, I got to wander around the store to check out some Totem speakers, and had a listen to the D'Agostino Momentum monoblock amps (yes, very pretty!). Also managed to put my test CD through the paces with this B&W 802 Diamond system: 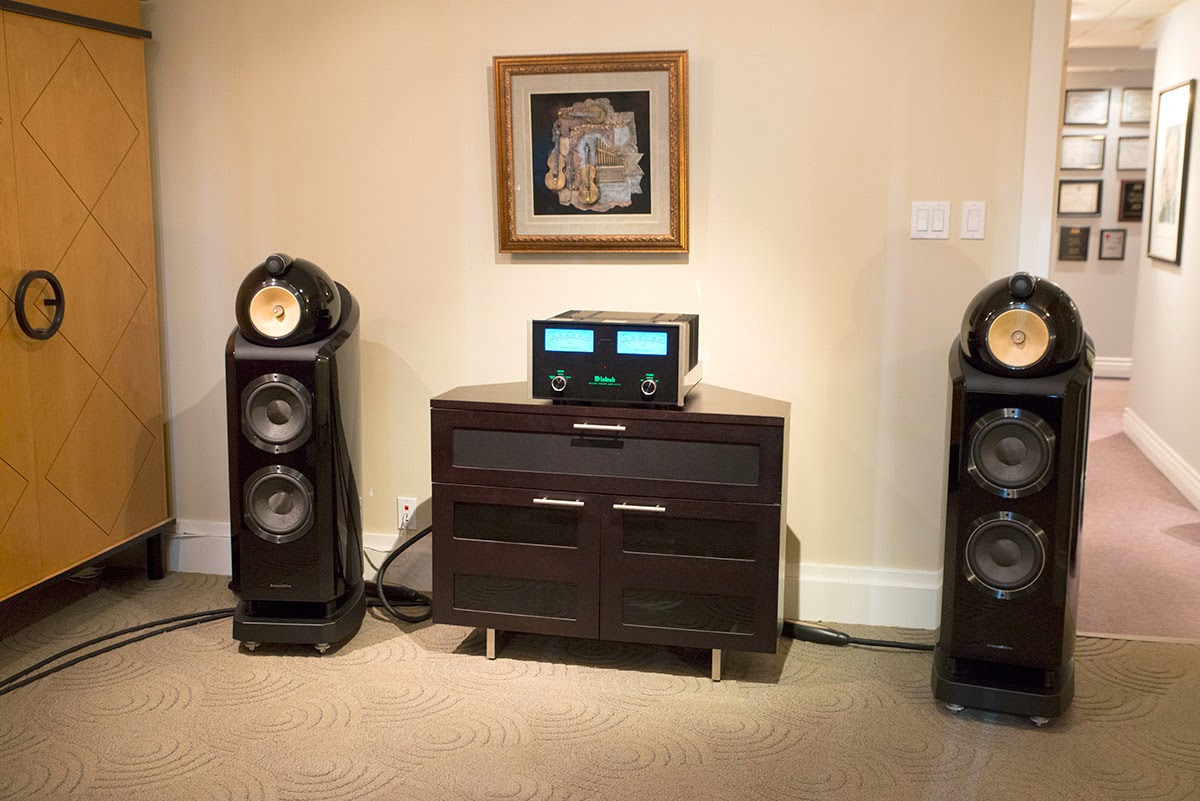 As you can see, it's powered by a McIntosh MC302 300Wpc stereo amplifier. SACD player was also McIntosh. Really nice sounding as well, definitely goes deep although I noticed some low bass accentuation in that room (sounds nice and punchy but I would have used some EQ to tone down the bottom end a little). I had a listen to these speakers last summer in Singapore at The Adelphi, coming away with a similar impression of the excellent sound quality. I'd certainly be very happy with these at home :-).

Okay, time to wrap up! I'd like to thank Hi-Fi Center again for the opportunity to listen to the Nautilus - a classic icon of the audiophile world. To be in continuous production for >20 years in these days of perpetual upgrades and engineered obsolescence is quite a feat for anything; much less an electronic device. This opportunity is also a testament to the value of having good "brick and mortar" specialty stores where the knowledgeable, enthusiastic and friendly staff can answer questions and provide informed suggestions. Sadly, an almost extinct species in this day...