Okay, for fun, I thought I'd grab a few measurements of something... Somewhat... "Portable" :-) 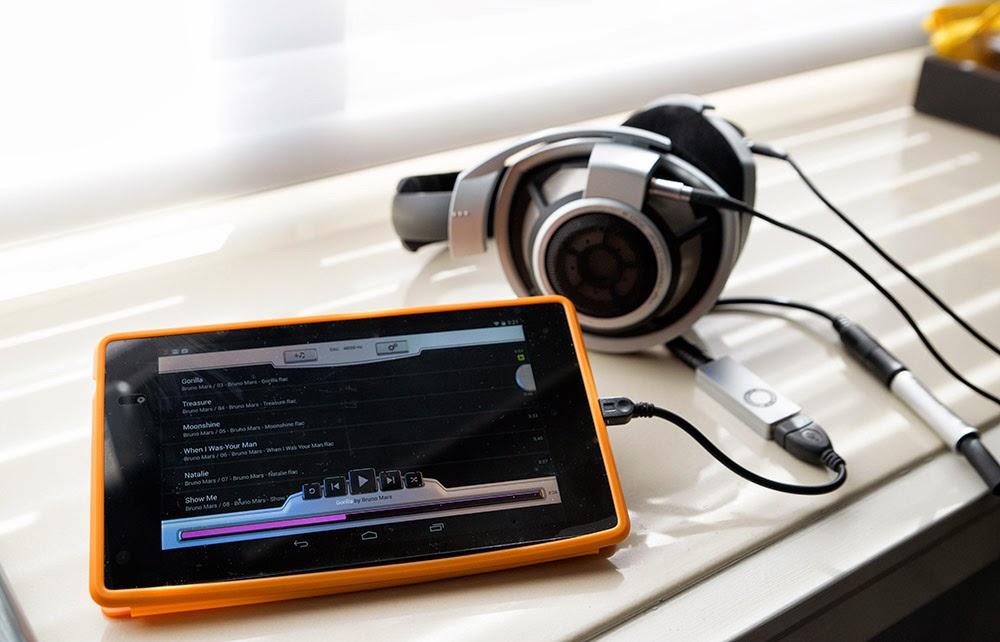 What you have here is my Nexus 7 tablet connected to an "on the go" cable (5" male microUSB to female standard USB, off eBay - pack of 3 for $10) --> Audioengine D3 DAC/amp --> Sennheiser HD800. Unfortunately, The D3 would not power up consistently when plugged into the Nexus 5 smartphone since that would have been even more portable! Looks like the D3 demanded more power than the Nexus 5's USB port could deliver.

I got USB Audio Player Pro software for the Android in order to get the USB DAC working. Unfortunately USB Audio Class 1/2 devices are not supported by Android by default. You can see the basic interface above (I happened to be playing some Bruno Mars Unorthodox Jukebox). It recognized the D3 without a hitch. It sounds the same to me connected to the HD800 like the other machines I tested the Audioengine D3 with last time so no need going into any subjective evaluation here.

I was more interested in whether the objective data showed any difference between this "mobile" set-up compared to the laptops / desktops.

Remember the clipping at 100% with the Audioengine D3. All the measurements are done with hardware volume attenuated to 92%.

As you can see, there is no substantial difference whether the ASUS laptop/ultrabook or Nexus 7 was used in either the 16/44 or 24/96 test case. The DAC determines the final audio output, not the source "transport" device.

The Audioengine D3 is substantially better as a DAC of course. As you can see, the Nexus 7 + D3 easily outclasses the native Nexus 7 audio output off the headphone jack. It has a flatter frequency response with lower noise floor measurable even at 16/44. The difference is more evident with a 24-bit audio signal... The 24/96 frequency response demonstrates that the native Nexus 7 in fact is incapable of 96kHz sample rate.

Slight difference between the 2 J-Test measurements. The noise floor seems a little bit higher on the whole with the Nexus 7 when I ran this test making the peaks such as the 16-bit modulation pattern less obvious. Also a little cleaner around the 24-bit 12kHz primary tone with the Nexus 7. The differences are down around the -120dB level and would not be audible IMO.

Okay... So this set-up isn't exactly a portable device. But it does demonstrate that you can get excellent sound out of a small Android device with the USB DAC that is objectively equivalent to using a standard computer.

Truth be told, I don't need "audiophile quality" sound in a portable device. I can't remember the last time I listened to my smartphone or iPod somewhere quiet with expensive headphones. On-the-go, convenience trumps everything else IMO so there'd be no way I'd bother with full sized headphones. If I did bring full-sized cans around on a train/plane/subway, it certainly would not be the expensive high-resolution open design headphones!

Day to day, I have my Nexus 5 phone with me. There are a few albums saved on the phone as MP3 or FLAC when I want to listen. Otherwise there are countless apps to listen to Internet radio and music streaming services which is what I listen to most. The days of the isolated non-networked portable music player are long over for me and probably the vast majority of music lovers.

For fun I decided to jump on the Geek Out bandwagon for a spin and see how it goes.

Looks like we're starting to see some user reviews coming out now, the first more formal one I see being this one at Part-Time Audiophile. So far it looks encouraging. As expected there are a couple of comments about the heat production of the 1W model. No comment about how it handles DSD and it looks like those guys are Mac-centric, so not clear how it works out in the Windows world (ie. drivers). For what it is, I find purely subjective reviews interesting to read but I would prefer something a little more than the usual "drive by shooting" ;-).

After a bit of humming and hawing, I decided to go for a blue "Super Geek" ($250, 720mW, 3.4Vrms peak) model as the best compromise for my case. My rationale is simple... The amplitude difference between 720mW to 1W is only 1.4dB (as compared to 2dB between 450mW to 720mW). I'm still concerned about heat production since this is a class A design which sucks full power all the time... Assuming the enclosure design for heat dissipation is the same, the lower power model should drop the running temperature a few degrees. I can see myself using this as a line-level DAC if it measures really well and tap the headphone amp feature only on occasion (the Audioengine D3 appears lighter and smaller for travel). As a 'standard' USB DAC, this also means it'll likely be "on" all the time so I'd rather not have something too warm sitting on my table. Furthermore, with a laptop computer, an inefficient class A device means more power drainage. The $50 saved is trivial for this hobby and not really an issue.

Anyhow, once I get this, I'll let you know some results... It will be interesting to see how this compares to the TEAC UD-501 which has the same DAC chip and similar feature set (NOS, DXD, DSD, etc...). Hopefully it doesn't take too long to ship out - my understanding is that only the 1000mW "Super-Duper Geek" model is released so far.

Juergen mentioned having a look at the HpW-Works software package for jitter analysis. Might just do that although I remain unconvinced it makes any audible difference in 2014 especially with asynchronous USB. I have yet to see a good example of a decent modern piece of equipment where jitter can be shown as the culprit for impairing the sound quality.

Tonight's music:
Kodo - Mondo Head - Although I generally prefer the more traditional sound of Tsutsumi, this one not only sounds nice in stereo but fantastic in multichannel off the SACD!

Enjoy the tunes everyone!

Posted by Archimago at 22:20:00
Email ThisBlogThis!Share to TwitterShare to FacebookShare to Pinterest
Labels: AudioEngine