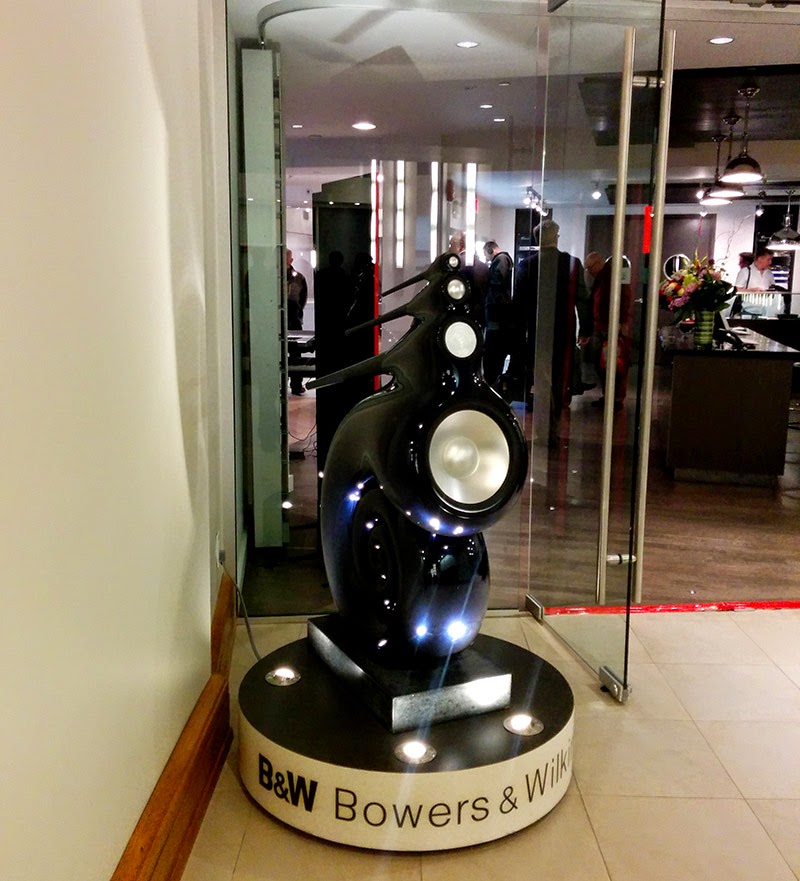 Of course what's a party for audiophiles without some live jazzy music? And there were free drinks on the house as well... Thanks guy! 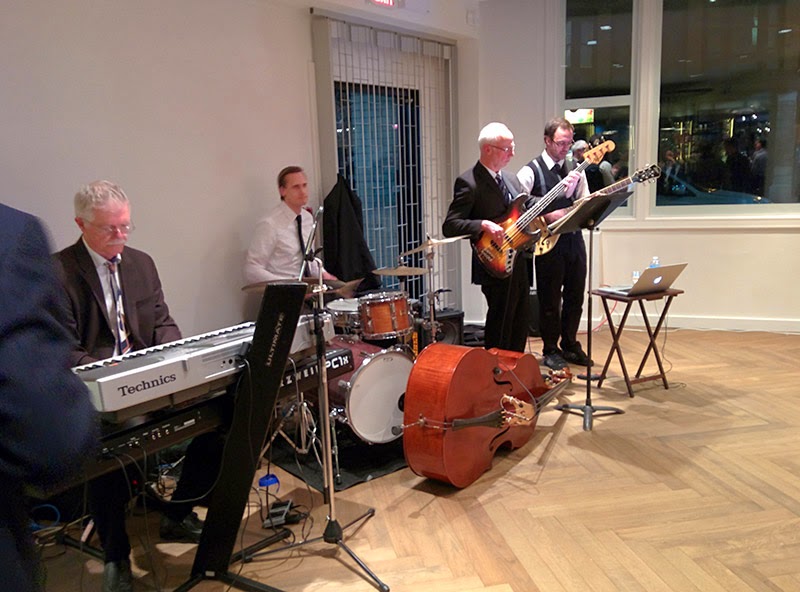 There's a nice "headphone bar" to demo. Just plug in the appropriate headphone to the Bryston BHA-1 amp and use the iPad to play a tune. Good to see balanced cabling used for the higher model Audeze and Sennheisers (not that it'd make much difference in a store but at least being demoed with best potential quality). I'm only showing the Audeze and Sennheiser selections here. They also have a full line of Audio-Technica headphones and Grados on the other side out of the picture to the left.

I already have the Sennheiser HD800's so was eyeing that Audeze LCD-3 - maybe I'll add a planar magnetic headphone to my collection at some point. Beside the LCD-3 on the top rack was the LCD-XC, a closed-back unit which sounded excellent with great noise isolation in the room. It feels heavy in hand and I can see it potentially getting heavy over time when worn, but the comfy ear pads really felt great (at least over the few minutes I was listening).

Across the way was an Auralic stack with the Aries streamer, Vega DAC and Taurus headphone amp. It was connected to the yet-to-be-released AudioQuest NightHawk headphones. It's a "semi-open" design so even in a loud area with folks chatting and music playing, it wasn't too difficult to hear the music playing; not as good as a fully closed design of course for noise isolation. Keep an eye on the Head-Fi posts to see when it's officially released. The AudioQuest rep says it's coming in April. It felt comfortable and I didn't notice any sonic issues for what it's worth in a noisy environment. As for the Auralic devices I think the Vega is a great DAC and I've always liked that amber LCD front panel design. Esthetically I still think the Aries looks too much like a Cylon Basestar on the old Battlestar Galactica! I don't see the point of the vertical visual obstruction from the "flares" on top and bottom. I'm sure it works fine as a digital transport, but it's not all that visually pleasing to me and doesn't help functionally IMO. And for this price, I'm just not impressed by the plastic facade.

Moving along, we see turntables on the wall along with various speakers below them. Most of the tables were Rega and Music Hall. These were not connected; for that you'll have to enter the 5 listening rooms. The classic Linn LP12 on display as well. 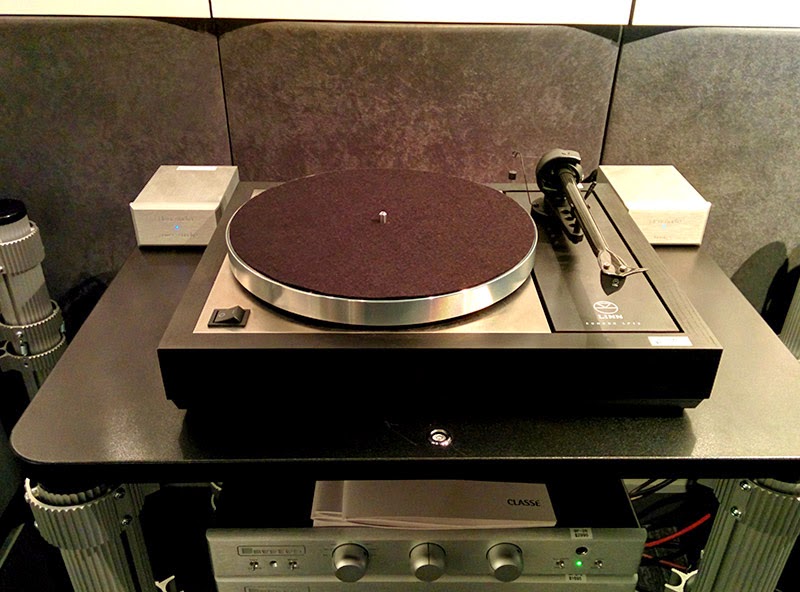 As for the music rooms (5 in total), I am impressed by the sensible and pleasing room treatments... Each room has a wall-mounted iPad running control software along with ethernet wired network streaming. Plenty of tracks available to play and presumably if all the rooms are connected to the same central server, one could play the same music and assess sonic differences originating from the same mastering. Computer-based music servers are obviously here to stay. Again, the noise level was a bit too high that night to appreciate the music playback but overall no complaints!

Here is the Bryston / B&W room. A few jazz and rock tracks were played. I was there when Lorde's "Royals" (from Pure Heroine of course) was playing... Good rendition. Although those B&W 802 Diamonds are capable of reproducing the low end quite well, I noticed that it didn't sound as "precise" as I have heard this track with a good sub; seemed just a little bloated to me even listening at what I thought would have been the sweet spot (too close to wall?). Something else I need to double check with my next visit. Listeners were suitably impressed nonetheless and I suspect many audiophiles have not heard this track with a system capable of "flat" response to 20Hz. I don't remember what was being used to render the music stream but there was a dCS Puccini CD/SACD player in there if anyone is interested in expensive disk spinners these days. 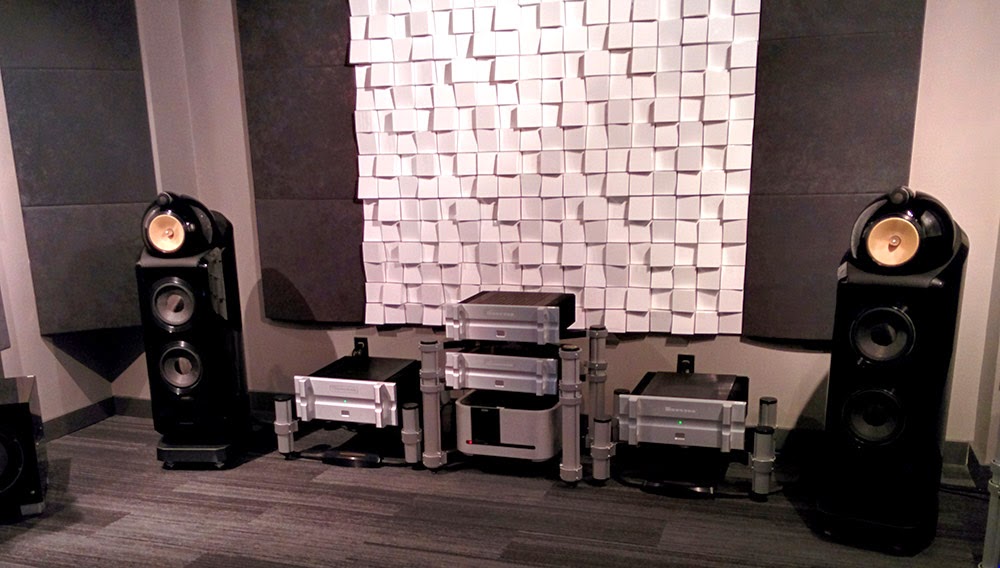 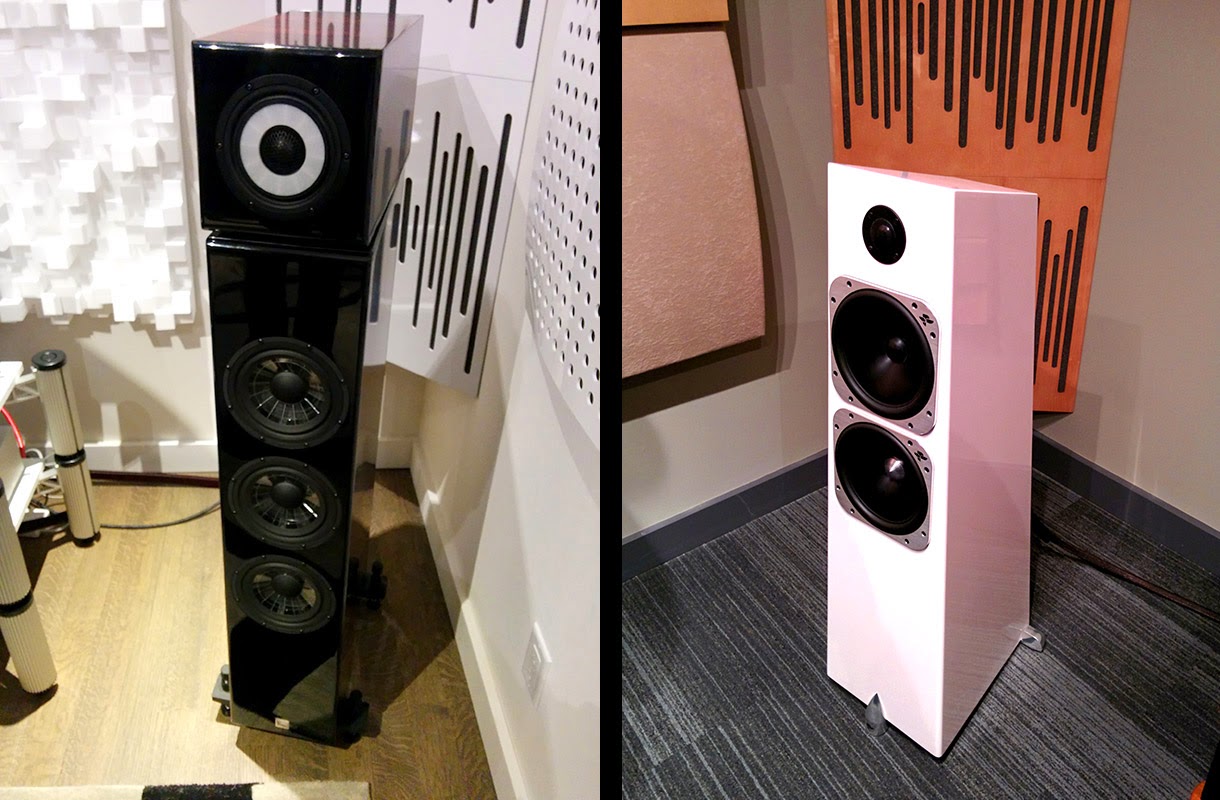 Another room featured the Vienna Acoustics Liszt speakers (~$15k/pair). Again, very nice room and sound quality... Forgot to take note of what amp they were using. They were playing an LP at the time interestingly enough. There was also a room featuring Totem speaker; in this case the Element Earth (~$9k/pair) on the right, I believe driven by Naim electronics. I was quite impressed by the tonal balance on acoustic and bass response from percussion tracks out of those little guys! They're smaller in person than my impression looking at the picture. Demoing the Totem was none other than the founder Vince Bruzzese... We had a nice chat about their speakers and design of the Element line. Personable guy, enthusiastic, unostentatious - I like that! I think most folks came out of that room impressed by these Canadian speakers.

The "highest end" room in terms of cost was the Sonus Faber Lilium (>$65k/pair - sorry for poor focus, you know, alcohol and all...) driven by dual McIntosh MC2301 300W tube monoblocks (>$20k/pair). They were playing light classical at the time; nothing that I thought really challenged the amp/speakers. For anyone wondering about the "grill" in front of the Lilium, they're just soft string-like material so IMO there's no real protection for the drivers behind... Not something you'd want to put in the family room when friends with kids come over for a visit! :-)

Speaking of McIntosh, here's one for the "high-end" computer audiophile: 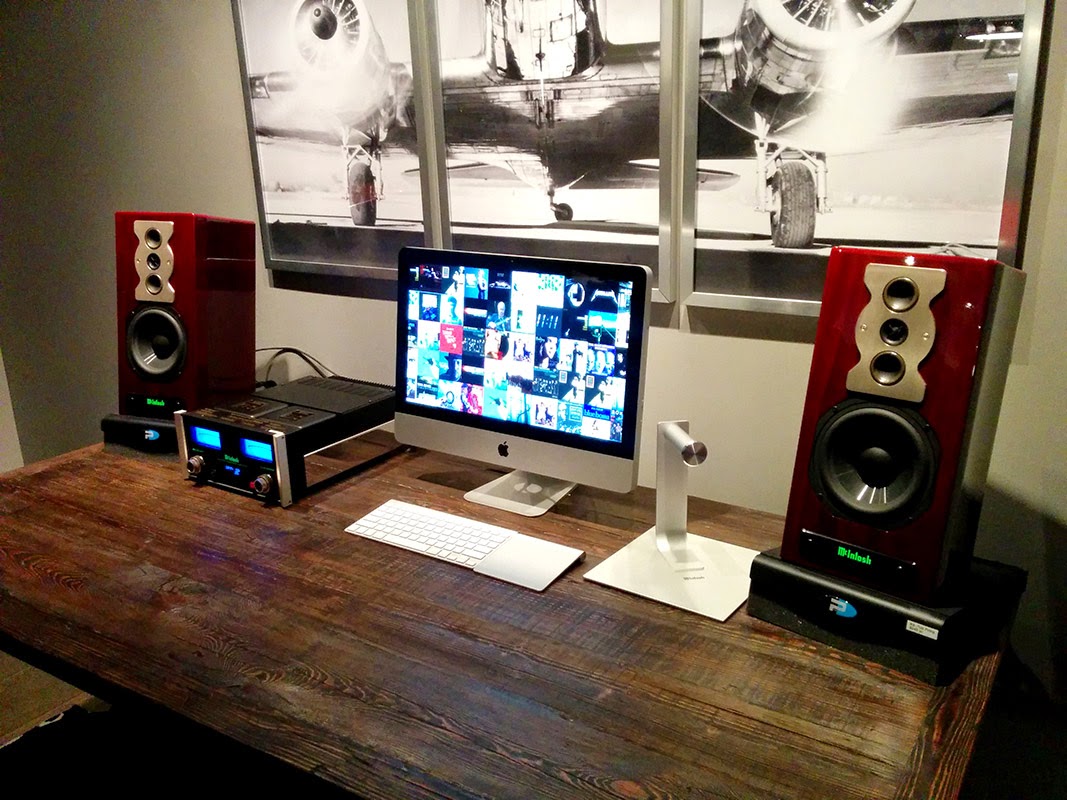 Looks like we have a MXA70 (50Wpc) integrated amp on the left I think with XR50 bookshelf speakers. I didn't get to hear this setup as it was in the main hallway with many folks hanging around and chatting. 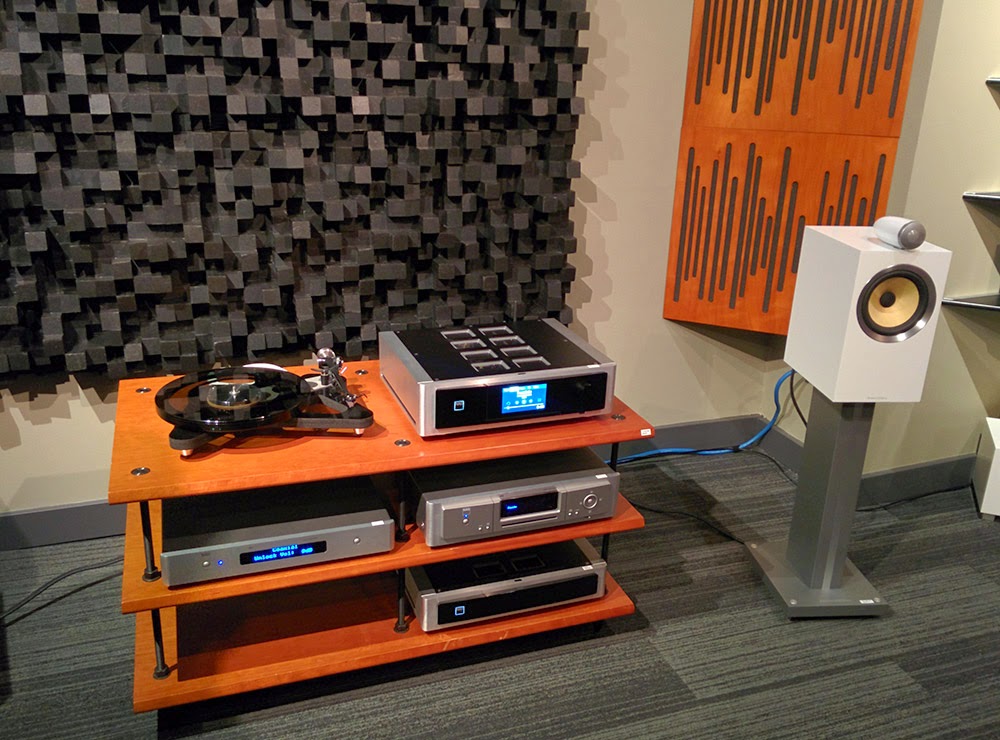 One of the rooms featured NAD and Bluesound (the server "Vault" was to the right just outside the picture). Both NAD and Bluesound are divisions of Lenbrook Industries so it made sense they were paired. If I'm not mistaken, that would be the B&W CM6 S2 to the right (~$2k/pair). I'll have to come back again to check out the NAD streaming devices especially that Masters M12. It looks like it has the BluOS module for streaming installed. The NAD rep was a pleasure to chat with as well. I'm certainly not about to change my Logitech Media Server (Squeezebox) system soon since it's working so well over the years (currently using one of the LMS 7.9 builds, >100 days uptime on the Windows server), but the BluOS control system seemed well thought out.

So, apparently this new store is built around the "sensory" retail Bang & Olufsen concept... Not sure what the specific elements are in the design here or how it compares to the New York or Copenhagen stores but it is well laid out. Of course we have B&O lifestyle products on display. They look good...

Those BeoLab 5's (active, Class-D, ~$16k/pair?) on either side of Paul McCartney are positively futuristic looking and filled the room nicely with sound; not sure how good they are with soundstaging or accuracy however. They were just playing some B&O promo material. I've seen mixed reviews.

Finally, what is an audiophile store without gadgets like cartridges and of course cables?

There you go. The AudioQuest USB and ethernet Diamonds. Yeah...

It was funny seeing the wives and girlfriends hanging outside the showroom entrance while the men mingled amidst the audio gear. Partly makes up for all the times you see guys just sitting on mall benches when the girls go clothes/shoe shopping I guess.

Dear readers, see, even an objectivist can have fun in this hobby :-). It's also great to see that there are currently plans for the first Vancouver Audio Show this May 8-10 - I might check that out if I'm in town around then. It will be great to see Vancouver increase in audiophile hobby prominence situated where it is with a huge influx from Asia in general and China specifically. Nice to have a store such as this to visit once awhile; especially not far from home...

Off for some R&R over Spring Break with the family in Texas. I just hope it warms up down there! If anyone has recommendations for a good hi-fi or music store (used vinyl!?) to check out in San Antonio - let me know.

As always... Hope you're all enjoying your music.

Posted by Archimago at 00:07:00
Email ThisBlogThis!Share to TwitterShare to FacebookShare to Pinterest
Labels: Audiophile Stores