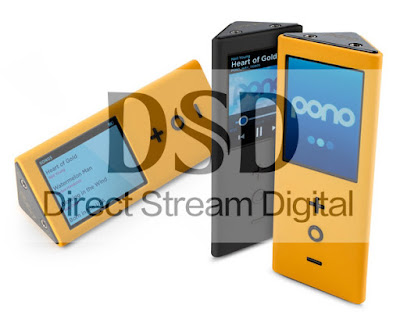 I was looking over the measurements over the last few months and realized I neglected to post results of the PonoPlayer doing DSD64 and DSD128 playback! So, instead of the data just sitting on my hard drive, I thought I might as well throw it out here for reference.

I don't believe I have seen anyone measure results of DSD playback with the PonoPlayer. I suspect a reason for this is that DSD was an "add-on" firmware upgrade released after the major magazines got a hold of these units for review. But then again, how often do you see measurements of DSD output quality?! I'm guessing that DSD playback was a "checklist" feature that some people wanted or it looked good for the company to support. Of course DSD is an acceptable input data format for the ESS SABRE9018K2M DAC chip (as it is with essentially all high quality DACs these days). DSD has been enabled as of firmware 1.0.5 back in February. For my tests, I'm using 1.0.6 from the May 2015 update.
As you know, DSD audio in reality is often not "native". That is, few albums out there are actually sourced from a 1-bit DSD recording and even fewer have not gone through some mixing/production stage converted to multibit and then back to 1-bit DSD. A large number of DSD albums originated as analogue masters with the inherent limitations of analogue recordings. [Remember that a couple of years ago I started the list of suspected upsampled DSD recordings which I have added to over time.] Considering how accurate PCM to/from DSD encoding and decoding can be, I would argue that there's actually nothing audibly wrong with recording in high-resolution PCM and converting to DSD and vice versa (the real question of course is "Why bother with DSD at all?!" Critique from 2013.).

Likewise, the test I'm doing here is basically a PCM test converted to DSD for playback. As in the past with the TEAC UD-501, Oppo BDP-105, and recent Essence One DSD Kit, what I did was take the RightMark 6 test signal and converted it to DSD using KORG AudioGate to generate the sample. Although I have used 24/96 test tones in the past, I figure these days to just standardize using the 24/192 high resolution signal for simplicity. Then using the DSD-playback device, we measure the quality of the playback and can compare with the original PCM output to get a sense of whether DSD playback is reasonably comparable in accuracy. As I have shown before, the KORG software, though not perfect, is free and provides good enough PCM-to-DSD conversion with low enough error that it's unlikely to be the limiting factor when assessing DAC playback quality.

The labels should be self explanatory. To the left we have PonoPlayer playing native PCM 24/192 and then the same signal converted to DSD. To the right we have a couple comparison devices - the excellent Oppo BDP-105 after DSD firmware upgrade a couple years back and the TEAC UD-501 DAC.

DSD64 playback from the PonoPlayer isn't bad. About a 5-6dB (~1-bit) loss in dynamic range however but still >96dB so better than 16-bit CD capability (a little over 16.5-bits). Probably as expected, the measurements are not as clean as the larger and more expensive TEAC and Oppo units.

Again, about a 5dB loss in dynamic range playing DSD data from the PonoPlayer compared to native PCM output. Results differ very little between DSD64 and DSD128. The only major difference if you compare the graphs is the fact that DSD128 isn't as noisy as DSD64 above 20kHz. Unfortunately I could not get DSD128 playback working when I tested the Oppo at a friend's house so no data for that player.

Summary:
No major surprises. Just be aware that the PonoPlayer's noise floor is a little higher and dynamic range slightly constrained when playing back DSD by 5 to 6dB compared to PCM. Still, DSD64/128 playback does sound great and it's not the kind of difference that should cause concern. I'd be really happy if the PonoPlayer could handle DST compressed DSD files one day...

Coming up this weekend... Geek Out V2 measurements! Stay tuned...