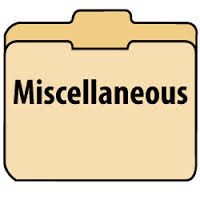 2. Here's a BBC Radio 4 piece on sound quality. Clearly they get it. It touches on the importance of not using too much dynamic range compression in the studio. It doesn't pander to the vinyl hype. There's honest acknowledgement that hi-res audio is subtle and requires a good sound system... Not something we're going to hear walking around with portable players and headphones on, nor when driving in a car. Gee... No surprise.

3. A couple of toys I got over the last couple months into Christmas holidays: 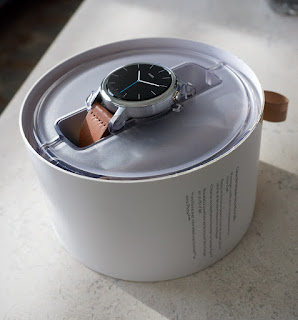 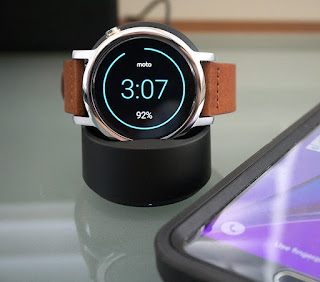 That's my 42mm-sized smartwatch (there's also the larger 46mm version). You know it's the Gen 2 based on the watch 'nub' button placed at the 2 o'clock position. Based on standard Android Wear OS with decent selection of apps. Works well and generally trouble free. I got it to crash maybe once in the last month while installing something or switching apps. There's convenient Google voice command recognition, nice to be able to Shazam something while driving without taking out the phone, fitness tracking works though not a major feature I needed. The main feature is basically convenient access to texts and messages over the course of the day... Also easily glancing at E-mails to be alerted to more important ones. The inductive charging cradle is also very convenient. Basically I put it in the charger overnight while I have my phone charged. No problem with battery life - I usually still have ~40-50% at the end of the day with the "ambient" low-power black and white display on. My favourite watch face currently is Military Digital - convenient one-tap access to stopwatch and tons of indicators and customization.

I like the round "classic" watch face having received a number of complements and questions about the watch (probably because many folks are used to the typical rectangular Apple Watch). Note that these Android Wear watches do not have a built-in speaker (notifications come through as haptic feedback) so you're not going to be walking down the street making phone calls off the watch Dick Tracy-like. It does of course have a microphone built in to respond to voice commands / take dictation for messages.

So far I have not seen any "must have" apps for wearables like this so I would classify these smart watches as something "nice to have" rather than a technology born of true necessity. 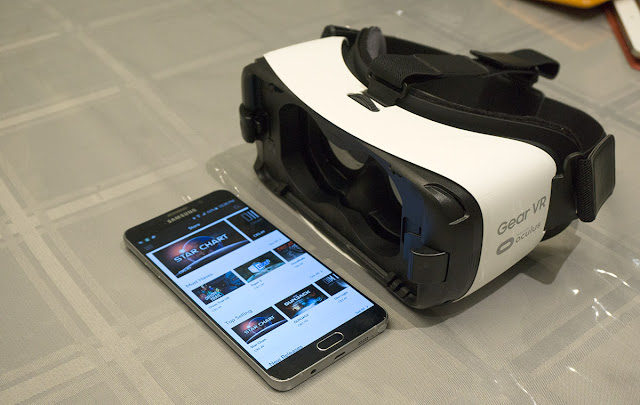 At ~US$100, assuming you have one of the newest generation Samsung phones (Galaxy S6, Note 5), this and other similar headsets (least expensive being the Amazon Cardboard) provides the VR experience for the mass consumer. When the USB connector is inserted and phone snapped in place, it detects the peripheral, and the screen is converted to a dual screen side-by-side landscape view which "feeds" each eye. The lenses in the headset provides the stereoscopic focus and there's a little knob up top to help with focus fine-adjustment. To the right of the headset is a 4-way touch direction pad as well as the "Back" button to get to the main Oculus screen, and convenient audio volume control: 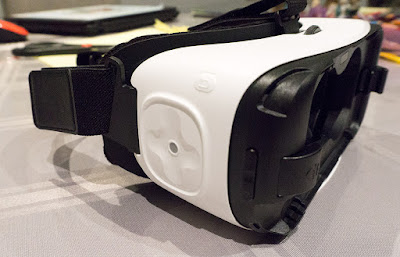 How well does this work? Let's just say that I was impressed! As an early generation product, there are clearly some limitations... First the phone screen resolution isn't great so you can make out the Bayer mosaic array which adds some aliasing and color accuracy defects to the image (the optics also add a little bit of chromatic aberration when viewed off axis). This is one application where I can see the potential of a high-resolution 4K screen on a cell phone. Secondly, the touchpad interface works OK for basic interaction with the apps but of course a gamepad with physical buttons would be better (maybe something inexpensive like this). Better still and clearly the next step in interactivity would be position-sensing technologies like the "Rink" Samsung demo'ed at CES 2016.

Despite the shortcomings, it's the experience that counts and certainly for those who have not tried something like this, it is a powerful reminder of the importance of our visual perception in building the sense of reality! Sure, a high-fi sound system can provide an illusion of a concert hall but when you're immersed visually into a simulated space with good headphones on, the power of the experience is undeniable. Swimming undersea with the whales, dolphins, and stingrays in theBluVR was both exhilarating and at times freakishly frightening! It was a sweet treat to watch the animated short Rosebud. You can virtually strap into Ironman's suit with the Jarvis HUD in the first part of the Marvel Avengers 3D video demo. The 3D effect and sense of motion when running in Temple Run VR was also a lot of fun and surprisingly effective. Yum, yum... It feels like the tasty 3D VR treats are just beginning!

Now speaking of food and tasty treats, just a reminder for those who have not tried a VR headset to attempt initially with an empty stomach! I am a bit sensitive to first-person shooters and can usually handle about an hour at a time. The VR headset was reasonably comfortable and I found that most of the time, I can tolerate the VR effect better than FPS games because the head tracking was remarkably accurate (mild judder once awhile) and this helps orient the mind. However, in games like Temple Run VR which has a motion path "on rails", the vestibular-ocular mismatch can be extreme especially when mixed in with the multiaxial head tracking on top of the on-screen motion. When you purchase or download apps, the Oculus store does describe the tolerability of the title in the form of whether "most" people can handle the simulated motion.

I think there was general disappointment at CES when the Oculus Rift was unveiled with an MSRP of US$600. With that kind of steep pricing plus the need for a powerful PC to run the games/apps, I suspect the inexpensive headsets like these will be the primary mechanism of consumption for most of us who just want to do casual gaming and VR experience.

Now, let's get out of the VR world and into the real world to end off... I must say in has been an interesting week in the financial markets last week eh? Oil, currencies, monetary policy seem to be sending a message about the future and the macroeconomic environment we're heading towards; one likely of primarily deflationary forces leading us as societies to review key concepts like the meaning of "credit". The concept of wealth and value are all part of the "big picture" in life and will affect perceptions in all areas of society. Of course I usually don't write about this stuff other than brief suggestions of it like back in September 2014 since this isn't the focus for the blog. IMO, the audiophile world is full of luxury items (huh? $100,000 NOS DAC?) with an amazing amount of propaganda, half-truths, and gross misrepresentations. As such, I do not believe it will be spared when fundamental changes occur and we are faced with important questions like how we gauge "value".

In any event, 2016 promises to be an interesting and important year as this is of course also the year of an American presidential election.

Be safe out there, friends... Until next time, enjoy the music!