Looking around then, I figured that for those records that are really dirty or have oil and grime on them, the only simple way to do it was just to wash the darn thing in the sink! And simple "label protector" devices are all I need to ensure the label is not damaged or soaked in the process. What I present here isn't new of course (there's also this recent video), but it is an easy way to get it done for ~$20 even here in Canada (at Canadian Tire). A couple 3M Bondo 956 suction cup dent pullers. As others have done, you can find some cheaper alternatives to the Bondos but the 3M product is well made and feels very sturdy. For a little more money, there are commercial offerings like the Groovmaster which I was tempted to get before conveniently finding these dent pullers in the shop down the street. 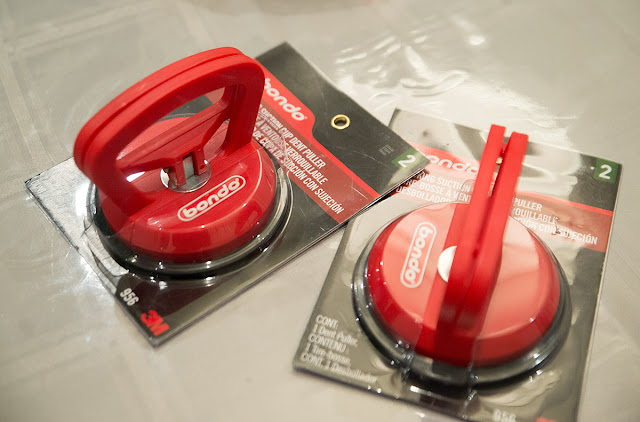 Like the video above, the steps are very easy and obvious.

1. Get your stuff ready by the sink. Albums, the Bondo dent pullers, some good microfibre towels / soft terry cloths to dry. I got this as well: 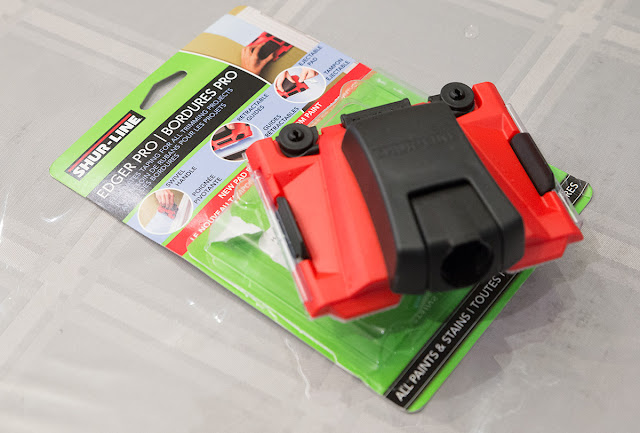 Good quality Shur-Line Edger Pro used for painting; the bristles are soft and not going to scratch up your LP.

2. Make your cleaning solution... Folks, remember that vinyl is a type of plastic. We're cleaning plastic here. I know that some folks are very meticulous and will buy all kinds of "enzymes" and special detergents (X-100, Photoflo, alcohol...). I'm good with 3 or 4 drops of mild dishwashing detergent like Dawn Original in about 250cc of water. A quick rinse will already remove the surface dust and particulates, the cleaning solution is to lift off oils and fingerprints as well.

3. Snap on those suction dent pullers. View the video above for a demo, but the main thing is to make sure you are protecting the label and because the suction area is quite large (~4.5" diameter), that you're not covering the actual inner grooves - some precise placement needed for long albums with small groove lead-out space. This is the most "difficult" part of the whole process... To ensure a good seal for the suction, make sure to engage the suction mechanisms on the two dent pullers simultaneously. Note how easy it is to hold the album with those dent puller handles once the suction mechanism is engaged.


4. I wet the edger's bristles to soften with water and pour some of the cleaning solution on. Rinse the LP on both sides under a sink to get rid of all the dust and particulates first. Comfortably warm water is fine. Then following the direction of the LP grooves I go round the album with the bristled edger clockwise and counterclockwise a couple times each way. Remember to clean circumferentially following the concentric grooves to dislodge dirt trapped within the grooves. Of course, don't go crazy with the scrubbing; we're not removing evidence from a crime scene :-).

I've noticed the edger works quite well. I have a copy of an early pressing With The Beatles made in Singapore with what looked like a small amount of adhesive in one spot that wouldn't come off with the Spin Clean. No problem using this technique with the edger, detergent and some lukewarm water.


5. Sometimes I'll let the detergent cleaning solution sit for a couple of minutes if it looks like there's a fair bit of oil on the surface. Then run it under the sink to wash off all the detergent both sides for a thorough rinse. Like the cleaning solution, I know folks will recommend all kinds of things like alcohol, distilled water, demineralized water, lab grade H2O, etc... for rinsing. Thankfully here in Vancouver we're blessed with tap water of better quality than much of the bottled stuff. The water is soft (<1 grain/gallon) with turbidity low (<<1 NTU). Therefore, I see no reason to spend more money on a special water rinse. Have a look at what the tap water quality is like where you live and decide if it's really that big of a deal... My suspicion is that it's generally not an issue. Be liberal with the rinsing to get all the cleaning fluid/detergent off.

6. Dry it off with the clean micro-fiber towel after washing.
These days I'll usually take the dent pullers off first before drying because the process usually will drip some water on the record. Again, like putting on the dent pullers, just be careful and do it with the record horizontal and balanced. The easiest is to release suction on the top dent puller while maintaining balance on the bottom one. Make sure not to do this too vigorously and drop the record!

7. Leave LP on dish rack or folder divider to air dry for a couple hours to make sure all the extra water within the grooves are gone before putting into LP inner sleeve (I'm still using the easily available MoFi "Original Master Sleeves" these days).

When done, of course make sure to rinse out the edger. Over time, I have seen bits of dirt accumulate between the bristles (including what looks like little black vinyl dust specks). Make sure to let all the pieces air dry as well and keep them from accumulating dust. I usually just keep them in a thick plastic LP outer sleeve "bag".

I'm not acquiring a huge number of LP's these days so I suspect this is the technique I'm going to be staying with. So far, I've probably cleaned about 50 records like this over the last 5 months or so and have been very pleased with the results. The ability to rinse ad lib cannot be underestimated and using the edger brush on the surface as much as I want gently I'm sure helps to clean off some of the more adherent dirt. As far as I can tell, the result is as good as I have ever experienced compared to the vacuum record cleaning machines. Note that it does take a little practice with the dent pullers - should be very comfortable using them after doing this 5 or 10 times. Note that there is some dexterity involved; fair warning for those with "butter fingers" :-). As I said earlier, I have not tried the ultrasonic variety of RCMs yet.

From my experience with vacuum record cleaning machines, there's no magic to what they do of course. Basically they're platforms that allow the use of liquid cleaners to be applied and rinsed and then the vacuum to suck up the fluids and dry the LP. I suspect something inexpensive (~$100) like the 3D "printed" device on eBay from a fellow Canuck would do the job just as well.

NOTE: The Bondo dent pullers had a really strong plastic smell when new. Recommended to put them somewhere like the garage so as not to stink up the sound room until the stench wears off :-).

To end off today's post, as zealous vinylphiles continue to bang on the "vinyl's back" drum, let us
remain sober-minded and remember the context of what has happened over the decades. 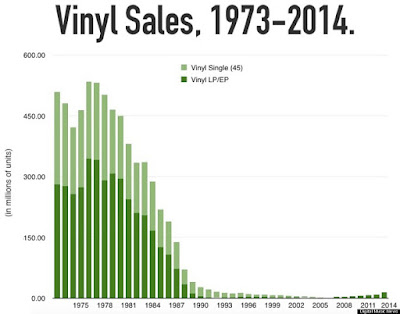 Seriously, whenever you hear talk of big comebacks and graphs of parabolic growth, make sure they at least include numbers from the 1980's to get the big picture... Estimate for 2015 vinyl sales is around 12M (vs. 9M for 2014) in the U.S. thanks to Adele's 25 and Taylor Swift's 1989. Notice how Pink Floyd's Dark Side and various oldies are next on the list! Growth in music consumption is certainly not a bad thing... The local record stores seem to be doing OK business although I noticed one of the larger local stores actually sadly downsized (probably because real estate prices and rent have outgrown LP sales in recent years!).

Alright friends... Off to Mexico for Spring Break for a couple weeks with the family :-). Looking forward to a little R&R. Also, I've been enjoying the book Sapiens: A Brief History of Humankind by Yuval Noah Harari recently. A great read for those interested in the "big picture" of development and evolution of human civilization.

Until next time... Enjoy the music everyone!