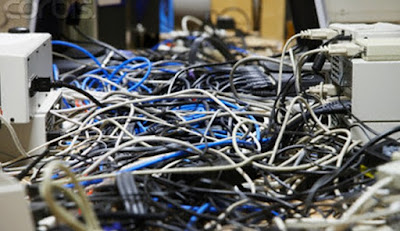 Well, of course cables matter! Without them there would be no sound or image! The key of course is to be wise enough to have a concept of what is needed, and how much difference the cables/wires can make.

Just a reminder, if you have not seen it yet, here is my summary of tests and thoughts on audio cables over the years if you're wondering about that.

As for today, given that time is limited this week, I just wanted to put up a "quickie" post mainly about some 4K HDMI cables I tried over the last couple months in setting up my 4K TV (a Vizio P75-C1).

If you're like me, over the years of fooling around with sound and video, you probably have a few old HDMI cables from Blu-Ray players, maybe thrown in from monitor purchases. As you can probably guess, as we upgrade to the new HDMI 2.0 standard for 4K, HDR, HDCP 2.2, 60Hz refresh rates, some or even much of these old cables just won't cut it any more. For example, back in 2013, I talked about a fancy Energy HDMI cable... Despite the excellent construction, fancy box, speed certification, it was not able to pass a 4K/60 4:4:4 signal and at times would blank while playing 4K/HDR video.

The reason for this inadequacy is obvious... Data bandwidth. Most of the equipment we've been using with HDMI ports up to the last year or so have been aimed towards the 1080P standard. HDMI 1.x has served us well for this resolution and even up to 4K but only to 30fps refresh rate. The last HDMI 1.4b standard can pack up to 3D 1080P video up to 120Hz (or 60fps per eye) which is impressive. But 4K demands 4 times the number of pixels of 1080P plus the ability to support 60Hz is just outside the data rate of HDMI 1.x.

Starting with HDMI 2.0, the cable now needs to support 18Gbps from 10.2Gbps previously. Although physically the cable will look the same, similar to the jump from USB1 to USB2, the demand will be higher for error-free transmission.

Trying some of the cheap freebie cables over the last couple months, I have certainly experienced some unusual behaviours with marginal quality cables. Things like taking 15-20 seconds for the TV to sync to a 4K signal, to occasional blank screens in the middle of playback, to strange color patterns when I turn on HDR if the image even displayed. Audio errors can also be heard such as beeps and blips (similar to a bad USB connection previously demonstrated) or the loss of audio altogether... Remember, like that demonstration of bad USB, this is not analogue degradation; no subtle tonal changes or noise "interference" sounds like you might have heard with poor FM reception or old-skool TV signals.

Therefore, here are a few cables I can recommend based on personal experience that has worked well for me with my Vizio P75-C1 TV, Yamaha RX-V781 receiver, and inexpensive but remarkably capable Amlogic S905X Kodi TV box.

First off if you want to pick something up easily at a local brick-and-mortar BestBuy, they have this in stock locally:

It's the Rocketfish 12' HDMI cable specified for 18Gbps speed. I see on BestBuy.com that it goes for US$60 or so; not cheap. However, it does do the job well, the metal connectors are well made and the plain black appearance is certainly fine for in-wall installations.

For something significantly less expensive and if you're wanting something even a little longer and works, I bought a couple of these: 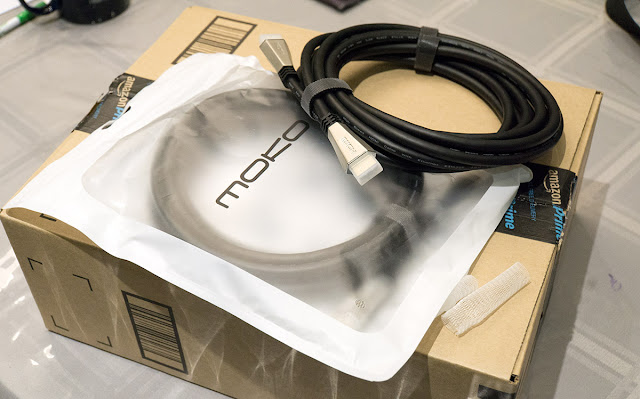 That's the 15' "MoKo" branded HDMI. Again, this cable is rated for 18Gbps; but the price is certainly right! Currently on Amazon, it's going for US$12 only. Like the Rocketfish above, it's a plain black cable. I have it snaking through the wall up the wall plate and tube guide to my TV. The other length I have serves as the HDMI between my HTPC (with Geforce GTX 1080 graphics card) to the AV receiver. I see there's an even longer MoKo 25' cable also said to be HDMI 2.0/18Gbps for US$16. I don't have this one but at around 8 metres in length, it's cutting it close to the HDMI 2.0 specification limits.

Also available on Amazon and not expensive are these "Toptrend" cables: 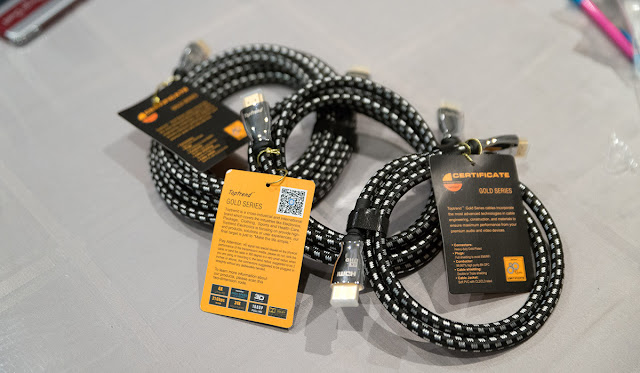 As you can see, I have the 3' (US$11), 6' (US$11.50), and 12' (US$18) runs. The company claims speeds up to 21Gbps - I know of nothing at this time that needs this kind of speed. Unlike the cables above, they look a bit fancier with braided cotton sleeve around the PVC jacket. Looks good I guess when not hidden behind the wall. All 3 lengths I have function well with no issues at all running 4K/60/HDR.

I see the Toptrend brand also sell 25', 35', and 50' lengths. Again, I'd just be cautious about such long stretches and the potential for occasional digital errors. It might be better to run 2 shorter lengths with a powered repeater like the Monoprice Blackbird (which ironically is white in color!).

For completeness, I tested all the cables above with my computer and GTX 1080 graphics card running at 4K/60 in 4:4:4 and RGB color. No issues with ARC from my TV to receiver using the Rocketfish and MoKo as well (didn't try the Toptrend).

Similar to HDMI 2.0, high speed DisplayPort will need higher spec cables for 4K/60. For awhile now, since I wrote the article on "Gone 4K" in early 2015 when I started using a 4K computer monitor, I've been looking for a 10' DisplayPort cable able to handle the resolution... I tried a few and even though many appear thick and well made, I finally found one that works well:

Simple, inexpensive UGREEN 10' for US$8 :-). Works great, looks plain, no problems at all for daily computer use.

I was over at a friend's house the other day and he has a similar 10' GearIT US$11 DisplayPort cable that works for him including 1440P/144Hz with his ASUS 27" MG278Q gaming monitor.

Like I said, just a "quickie"... Quite a number of options these days with digital cables like the HDMI and DP but the ones above at least I have first hand experience or have seen it in action. Notice though how inexpensive these cables can be considering just how much data has to be transported accurately down the pipeline (an infrequent visible error here and there like every 30 minutes or hour might be distracting but not catastrophic)! At 18Gbps, that's 3 times the maximal bitrate of a SATA 3.0 hard drive or SSD interface. In the audio world, remember that USB 2.0 which we often use with our DACs top out at 480Mbps - that's about 37 times slower than these 4K/60Hz cables I'm showing here!

So... How much do you think we should be spending on USB cables - even "audiophile" ones again?

I know that a brand name like Rocketfish, MoKo, Toptrend, and UGREEN aren't exactly going to invoke the same imagery as Nordost, AudioQuest, Synergistic, Crystal Cable, Audience, Cardas, MIT, or even Monster :-). But as I've expressed before, to put value (and money) on a brand name is an example of a non-utilitarian reason apart from video or sound quality... Not something I personally care much about.

Finally, notice I've said nothing about any of these cables making the video "look different". Obviously other than cables not syncing properly resulting in blank screen or very obvious image errors, it's just not possible for digital cables to cause changes in brightness, contrast, color balance, analogue-type noise and distortions. In the video world, since "seeing is believing", it is not often that silly purely subjective comments are made about cables. If you ever hear a company or writer talk about this kind of nonsense with their HDMI cables (Exhibit A: this nonsense article), IMO you run away from any dealings with any company that accepts such claims and certainly consider anything else written by the writer with well-deserved skepticism due to his/her obvious lack of insight.

BTW: I didn't expect it, but I found the movie The Accountant quite well done when I watched it this week with family and friends... Until next time, hope you're all enjoying the AV toys.
Posted by Archimago at 23:26:00