A few weeks ago I posted on the Dragonfly Black and the MQA filter impulse responses. I noted that based on Måns Rullgård's work, although there are potentially 32 filters available when "Rendering" with upsampling to 192+kHz, I only showed 0-8 in that previous post.

Notice the white dividing line between the top and bottom half of the 176.4/192kHz upsample filters. Basically even though there are a potential 32 filter settings available, at least what we see in the Dragonfly is that the first 16 (0-15) are unique with 16-31 being a repeat of the same. Although I have not seen tests with other MQA DACs to verify this, I assume it would be similar.

So once again, from what I've seen, MQA at least as embodied by the Dragonfly Black DAC consists of using the software MQA Core Decode passing along a 24/88.2 or 24/96 data stream to the DAC with instructions buried for the "Render" portion. The firmware in the Dragonfly Black will sniff out these MQA Render instructions and apply dithering and noise shaping as previously shown. But the most unique and proprietary aspect is in how the above filter settings are applied depending on the piece of music. If there is further upsampling to be applied (like if the music originated in 176.4/192kHz), the ESS DAC inside will be programmed with FIR filter parameters as per those impulse responses when upsampling is applied; we've already seen that this is similar between the Dragonfly and Mytek Brooklyn at least with the first 0-8 filter settings. In the encoding process, the software must presumably be matching the music with the "best fit" or "correct" version of the above 16 filters which to be honest represents only very tiny differences compared to true speaker/room correction for frequency and time-domain anomalies...

Whether this filter matching is the essence of the claimed "end-to-end de-blurring" I suppose can only be answered by MQA. Likewise, how well it objectively works can also only be answered if there is access to the encoder itself.

I see recently an article on Computer Audiophile where AURALiC's Altair is said to implement its own form of MQA-like decoding. Strange that MQA is currently only minimally available to the general public (only to TIDAL streamers and a few DACs) and already we have some kind of "clone" that provides its own resampling in a commercial device that I must assume does not infringe on MQA's intellectual property!? Naturally, one wonders how this is being performed and whether similar filters are used compared with the "official" MQA selection above. (Some interesting comments from a few months back made by the AURALiC CEO - "I don’t believe the very High End will benefit from MQA as it only degrades sound quality, not improve it." Wow, that's quite a bold statement from a manufacturer!)

In any event, the bottom line is - does MQA sound any good?

Go listen for yourself with the INTERNET BLIND TEST of MQA vs. Hi-RES and fill out the survey. Let me pose this as a challenge to serious audiophiles - don't just talk and render opinions; actually experience for yourself and add to the data! Thanks to those who have already stood up and be counted.

Okay guys, unless there's much new out, I've had enough with talking about MQA for awhile as a main blog post... At least until I present the results of the MQA Blind Test likely in September of course.

One yeah, one last thing: 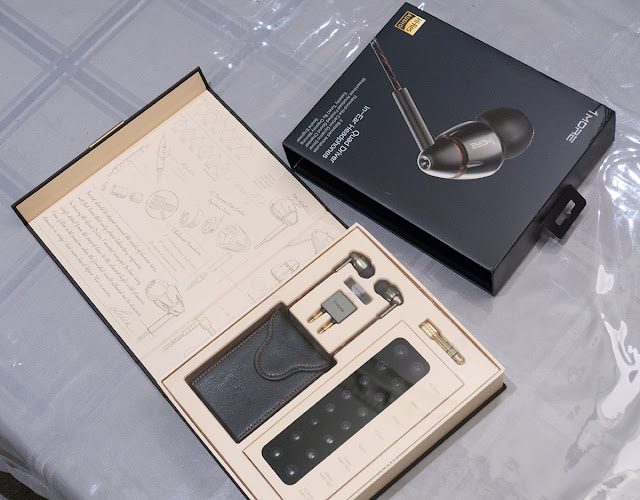 Shhhh... Don't tell my wife. I'm certainly not in need of yet another pair of headphones/ear buds :-).

But I grabbed one of these 1MORE Quad Driver IEM headphones last week on sale. I gotta say that even at the usual Amazon price of ~$200, this is an impressive package. The headphones themselves are solid, connectors well built, reasonable cable length, metal in-line volume control for iOS/Android (volume +/- flanking mute middle button). Includes adaptors and extras (1/4"-3.5mm, airplane adaptor and a shirt clip!). Minimal microphonics from the cables. Impedance of 32-ohms so make sure you have a reasonably low output impedance headphone amp (<5-ohms). I'm lucky that the default ear piece fits comfortably for me but I have heard others have had difficulty even with all the different ear-piece sizes included. This latter bit is especially important here given the heavier and somewhat more bulky ear pieces. The earphones are made by Chinese manufacturer Xiaomi.

"Breaking it in" still. But so far, subjectively I'm hearing nice full spectrum sound. Really good bass with a proper seal! Noticeable improvement going from my Surface 3 laptop's output to a good mobile DAC like the SMSL iDEA (previously measured here) as expected for any decent headphone. It's touted as consisting of 3 balanced-armature drivers inside plus a "Diamond-like Carbon Driver". Overall, considering the price of so many other audio toys, this seems to be good value. The Triple Driver version might be an even better value at half the price.

Hope you're having  a great summer/winter!