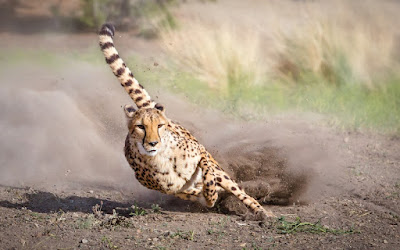 Remember that the Ryzen 1700 is the least expensive (~US$300) of the new AMD Ryzen 8-core processors. It clocks in at 3.0-3.2GHz base with turbo to 3.7GHz for a single core when processor power envelope is available. It has a TDP of only 65W and runs at 1.2V with an included heatsink/fan which is what I've stuck with because to be honest, it works really well and is quiet. In comparison, the Ryzen 1800X (~US$430) is currently the most powerful of the Ryzen 7 line running at 3.6GHz base with up to 4.0GHz turbo single core. It's rated for 95W. In between we have the Ryzen 1700X (~US$350), 3.4GHz core, 3.8GHz turbo, 95W. Notice that the reason the TDP has gone up with the 'X' models is due to the higher voltage the CPU runs at; up to around 1.35V at higher speeds. There's also the AMD XFR "eXtended Frequency Range" feature which allows a little bit of extra overclocking at default up by 100MHz for the 1700X and 1800X, and 50MHz for the 1700 when the power is available - cute but practically little difference IMO.

As a "family" of processors, remember that these days CPUs with the same features like these are typically all made in the same fabrication facility and the only difference is "binning" to separate out the different thresholds of stability. In effect, the only difference between a 1700 and 1800X is "cherry-picking" the ones that can run up to 4GHz bursts from those that peak at 3.7/3.8GHz for example.

There's really not much difference between the 1700(X) models - turbo-clock differs only by 100MHz with the higher voltage. It's no surprise then that basically we can expect any 1700 to achieve 1700X speeds with no real difficulty at all. 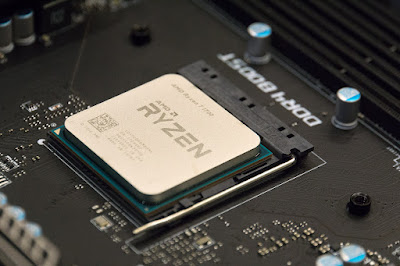 I have no intention of buying another CPU cooler nor using liquid cooling. So I am not interested in any extreme overclocking like pushing my Ryzen 1700 to 4.0GHz with liquid coolers or anything like that. In fact, I've never bothered with liquid cooling all these years. What I am interested in however is achieving 1800X stock speed while keeping the voltage low and power consumption low overall. Let's get to it...

1. Get the BIOS settings where you want them. 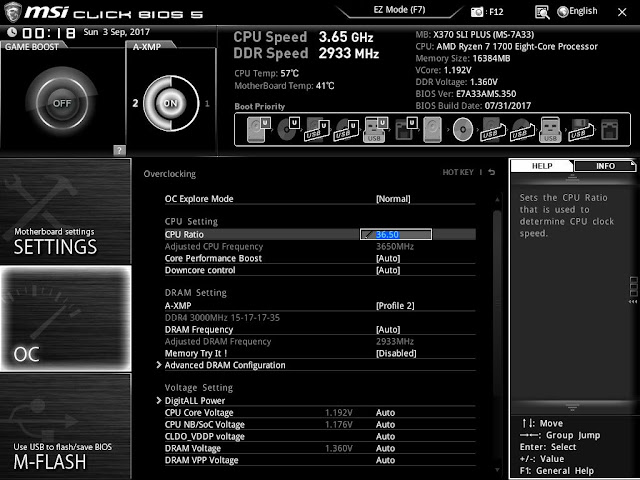 Next, because I want to keep all the "cool and quiet" power savings (let's stay "green"!)... 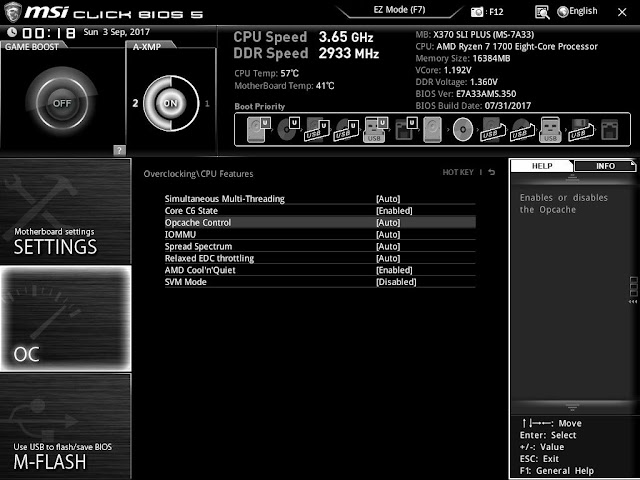 Enable core C6, make sure the AMD Cool'n'Quiet is still on (this tends to get turned off when you're overclocking with good reason most of the time).

I'll save these settings as my configuration in the "OC PROFILE" section for this motherboard/BIOS... 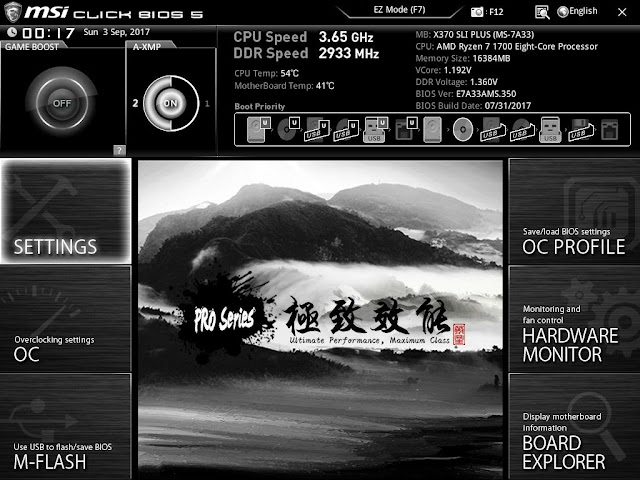 NOTE: Although my suspicion is that most CPUs will be able to hit 3.6GHz without issue, another way to find out the max speed of your CPU is just by using AMD Ryzen Master Utility:
You can fool around with the clock speeds in Windows to make sure they're stable before commiting to BIOS.

3. If all is good with your Windows start up, now make sure you have the AMD chipset driver installed so there's the "AMD Ryzen Balanced" power plan in place as discussed here. (Direct link to the AMD software.)

4. Make sure to use the "AMD Ryzen Balanced" plan and I will tweak a couple little things in the "Advanced settings" of "Power Options" (easy to find, just type in "Power & Sleep" in the Windows 10 search bar): 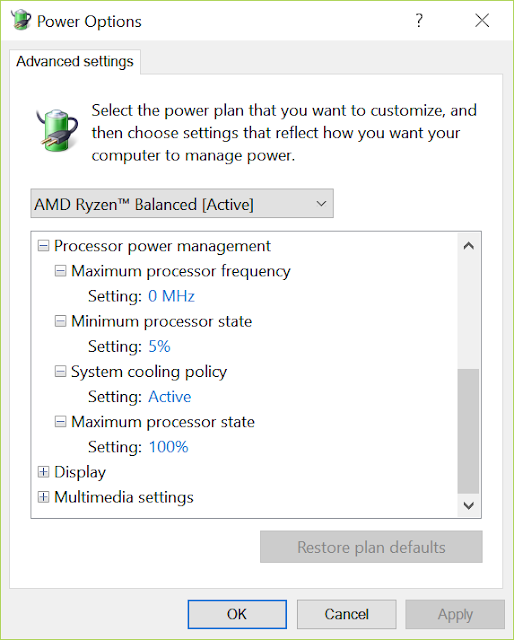 I make sure the "Maximum processor frequency" is set to 0 MHz which will allow the CPU to run at the maximum found in the BIOS. "Minimum processor state" I have as 5% so Windows can be free to downclock the CPU as much as it wants when idle... In reality, I only see it throttle down to 1.5GHz and the voltage will drop to <1V as well.

5. Verify that the overclock is working... I like using CPU-Z. Here's how it looks... 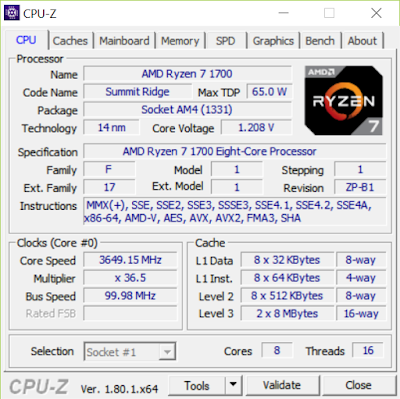 There we go... 3649MHz. Notice the voltage is still 1.2V. You'll see the "Core Speed" bounce around a bit and likewise the voltage fluctuates as well over time. That's the AMD Cool'n'Quiet and Windows 10 doing its thing with power savings.

Now go into the "Bench" tab and run a benchmark... You should see a result like this showing that your Ryzen 1700 is running at 1800X speed (but without higher voltage since we're leaving the power saving features intact and keeping things at 1700 settings):

Click on "Submit and Compare" for some more info: 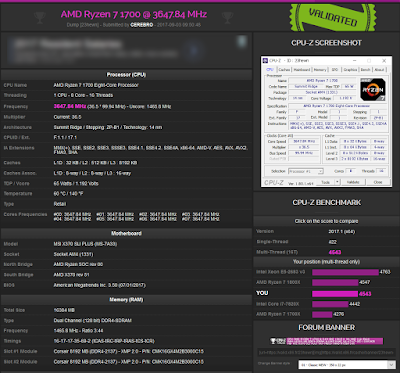 As you can see, I'm using "Very High" stress level (4GB RAM used) and ran 10 iterations. In my experience, this level of "burning" will reveal 99% of unstable systems in less than 30 minutes. Notice also that the Linpack output with the Ryzen is "only" 76 GFlops. Compared to Intel processors, this is on the lower side. I suspect it's a reflection of the fact that it's based on Intel's Math Kernel Library (and LINPACK Benchmark) which is understandably optimized for Intel processors.

One important thing to watch for is if the Linpack Time increases and Speed drops over the duration of the test. This is an indicator of thermal throttling suggesting that your cooling solution is inadequate for the task and the CPU is slowing down deliberately.

This is pretty good already, to finish the "stress test", I will also run Prime95 for about 24 hours... 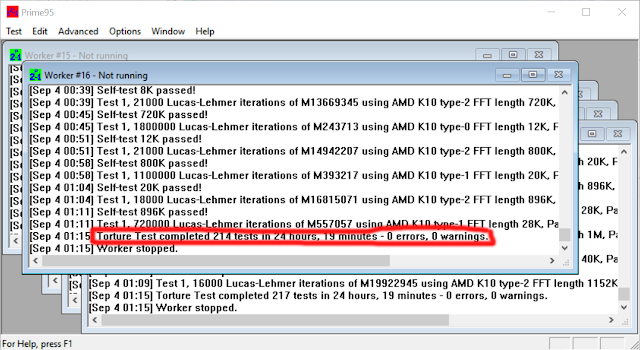 Nice. I ran this on a hot summer day with no problem. Make sure all 16 Prime95 threads are free from errors.

Done. As promised, a simple overclock of the Ryzen 7 1700 which I believe should be quite easily achievable with most processors to get to 1800X speed. It's not that I really need the extra speed, but there's nothing wrong with picking up a few extra percentage points (a good 15% based on the CPU-Z benchmark). As usual, with overclocking, there's a bit of luck with the "CPU lottery". Mine will go up to 3.7GHz on air at 1.2V using the stock AMD Wraith Spire cooler without over-volting. It will boot but start showing instability beyond 2.7GHz. Hence I pull the speed back to 3.65GHz for a bit of overhead especially on those hot days. Remember that the actual Ryzen 7 1800X can still turbo up to 4.0GHz with one of its cores when minimally multitasking so the 1700 isn't exactly overclocking to what the 1800X can do; close enough though.

Have fun pushing your CPU - there's really no way to damage it unless you go crazy with increasing the voltage. I hear that the Ryzen processors can easily be up-volted to 1.4+V; just don't quote me on this if you "brick" the processor. Of course at this kind of voltage and with the potential amount of heat generated, you better have more than stock air cooling!

Practically, computers are fast enough for basically all day-to-day activities. When it comes to heavy number crunching, Handbrake will convert 1080P video to HEVC 10-bits in very good quality at realtime speed (24-30fps). However, converting 4K video to HEVC 10-bits at a similar image quality runs at around 8fps or about 1/3 realtime. I can always use a quicker CPU of course :-) but for 2017 and 300 US bucks, that's not bad I think!

It's good to see that the competition from AMD has pushed Intel into action with their 8th Generation "Coffee Lake" processors with 6-core i5 and i7 devices. Performance figures I've seen look very impressive for the new i7-8700 and i7-8700K!

Of course, if you're an AMD fan and really want the top-end multi-core performance today, check out the Threadripper series of processors using the more advanced Socket TR4 platform and X399 chipset motherboards: 1950X (16-core/32-thread), 1920X (12-core/24-thread), and 1900X (8-core/16-threads). Obviously more expensive and power hungry (180W for 16-cores) to achieve the speed...

It's wonderful what real competition can do in the world of technology in terms of performance and price.

I was thinking the other day what might be a nice upgrade in the next few years on the computing front... Yes, we will see more and cheaper 4K screens, faster graphics cards for 4K gaming, newer generations of VR headsets, etc. But one rather un-sexy piece of computing infrastructure has been short-changed in the last few years - the home network infrastructure. It seems like we've been sitting at 1 Gigabit speed for awhile now. With the recent release of the ASUS XG-C100C 10Gb RJ-45 adaptor for around US$100, I have a suspicion that in the next 3 years, we're going to see 10Gbps home networks become the standard. The problem currently is that compared to 1Gbps, this is still quite expensive, especially the 10Gb switch (for example, the Buffalo 12-port BS-XP2012 is still around US$750 today). The other interesting thing is that these multi-gigabit speeds can still be achieved over Cat5e cable though distance would be reduced to around 45m compared to higher speed Cat6a at 100m. 45m (~145 feet) is still quite a good distance in the home and the hardware would be able to negotiate a slower speed like 2.5/5Gbps if needed.

While not very sexy, I am looking forward to the day when I can have 10x the bandwidth of my current gigabit pipe between the main workstation and my multi-terabyte server computer in the basement. Internet speeds will need to keep up!

The big question of course is, when we get those 10Gbps home networks, would streaming hi-res audio sound even better??? I guess for some in the "high end", the only way to know is to listen when the day comes... Cuz "everything matters". :-)

Alright guys, I'm currently overseas as I release this post. Alas, no high-fidelity listening for a few weeks unfortunately. At least I have my 1More Quad Driver IEM's on the trip loaded with a few albums. Hope you're all enjoying the music :-).