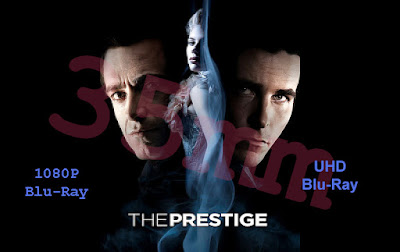 
The UHD Blu-Ray video is encoded at an excellent average bitrate of ~55Mbps as 10-bit H.265/HEVC with HDR10, while the standard 1080P Blu-Ray has a video bitrate of 23Mbps encoded in H.264/AVC - not bad at all and certainly an upgrade compared to last week's <20Mbps VC-1 codec Blade Runner. 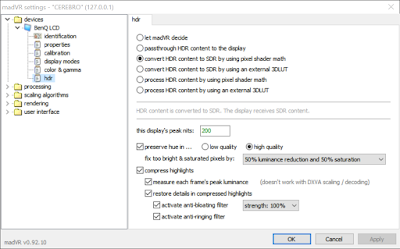 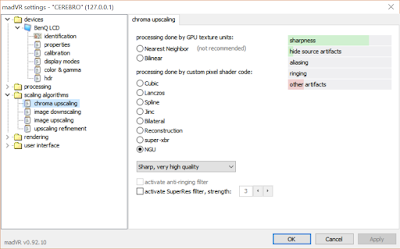 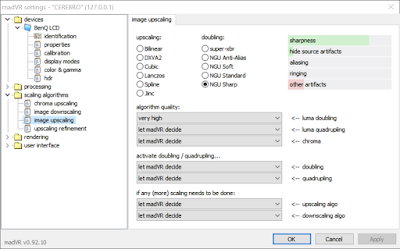 I scanned through the movie and picked out a few scenes that looked interesting or appeared to be of good quality for a still-image comparison. Remember that since this is a drama set mostly in Victorian-era London, much of it appears a bit dark and dreary. As you see, many of the screenshots consist of close-ups of the main characters...

As usual, to really appreciate the comparisons, make sure to click on the image to show the 1:1 shot - best viewed on a 4K monitor of course. 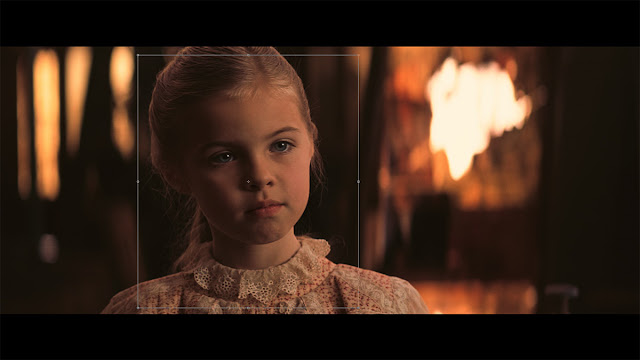 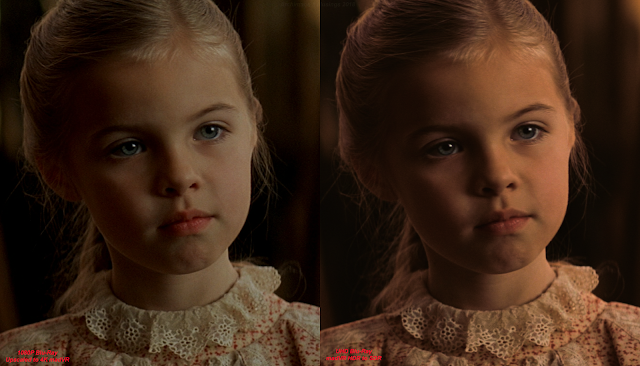 Notice the color differences between the original Blu-Ray disk released in 2007 and the new UHD Blu-Ray released in late 2017 - a convenient 10-year span with improved encoding technology. The new disk is "warmer" with higher contrast. We see this across the whole movie.

As you can see, the detail in the hair and eye lashes actually look the same between the 2K/1080P and 4K/2160P versions. 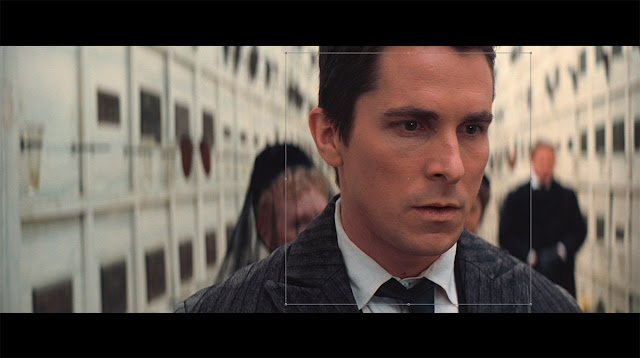 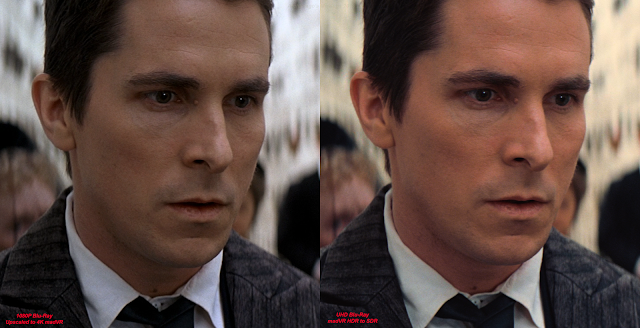 Notice the white in the background has been "colored" with a more yellowish, warmer tone. Unlike Blade Runner, film grain and noise are relatively equivalent across the two versions through most of this movie. 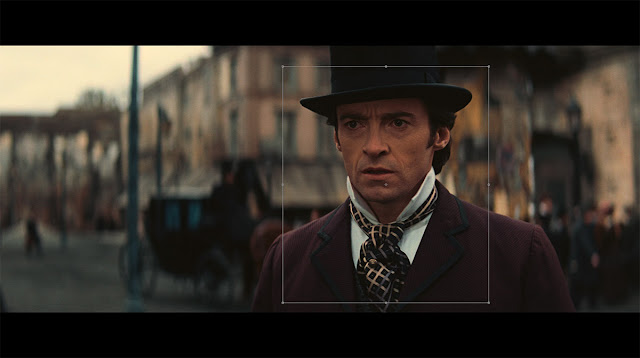 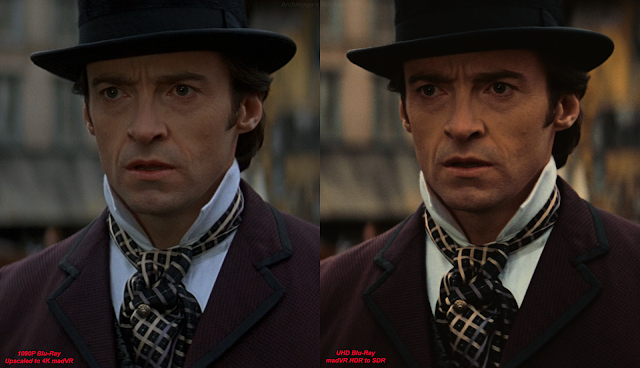 In this scene, perhaps the stronger contrast in the 4K HDR has accentuated the film grain a bit. Notice the fine pattern of the suit is about the same in both versions... No extra detail to be found in facial stubble and wrinkles.

I could not resist including a shot of David Bowie here as Tesla himself :-).

Bowie's anisochoria is easy to see in this scene (his left pupil is permanently dilated, supposedly the result of a fight with his buddy George Underwood back in 1962). 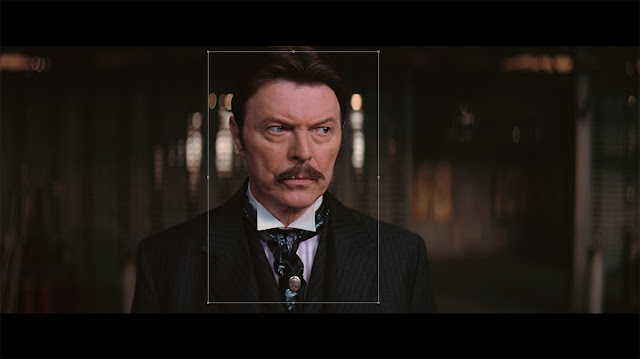 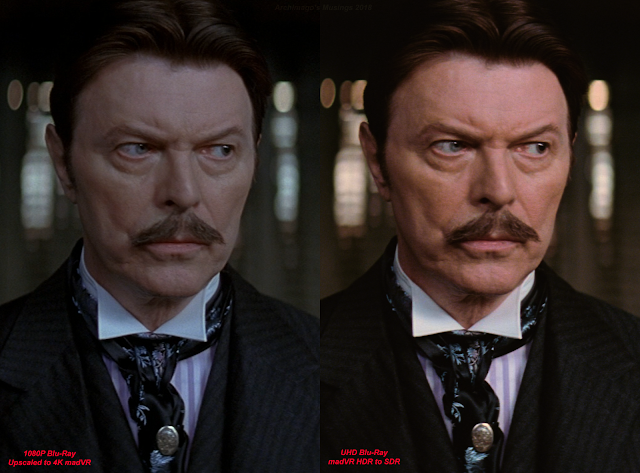 Alas, not the sharpest scene but the HDR color/contrast remastering brightens up the image and makes it less "cold". 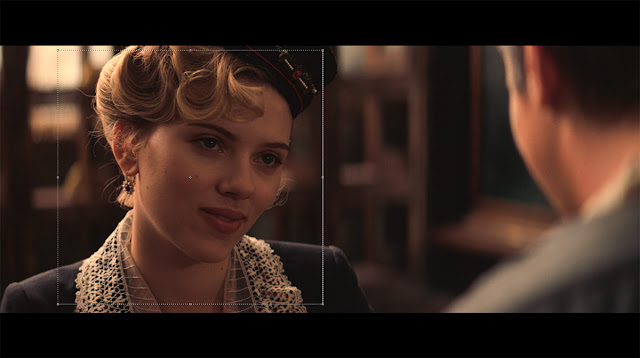 In the 2017 UHD Blu-Ray release, it looks like they fixed that whitish fleck of dust (?) you can see in the upper left of that crop near her hair in the 1080P version. Little things like this to repair imperfections were done. Again, a warmer color tone, bit better contrast.

Not much if any spatial resolution improvement given that the 4K image has 4x more pixels encoded for each frame! 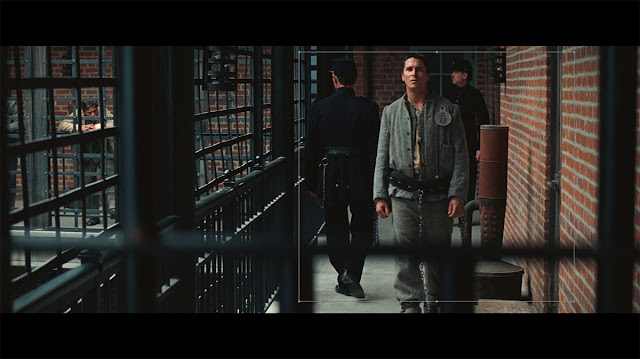 Michael Caine plays Cutter, the "ingénieur" with this scene in his workshop, all kinds of doohickeys around. 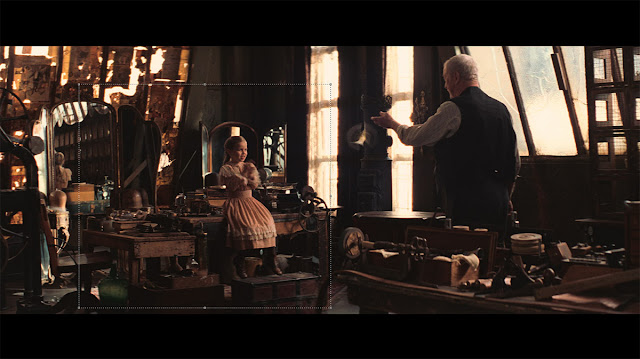 Lots of potential little details like the drapes, wood grain, metal paper tray, glass bottles, etc. to compare between the two versions. Maybe the focus was a little soft, but I would have thought there'd still be something of significance between the two images in terms of extra detail present! I don't really see any notable worthwhile improvement.

While the color and contrast differences may be an improvement, notice that there was no major upgrade to the sharpness or resolution of the image! Remember, the 4K image provides four times the number of pixels; obviously it's not being utilized.

Yet again, I am having great difficulty seeing differences between standard 2K/1080P and 4K/2160P when examining movies that originated as 35mm film. While I keep hearing that "analogue is better than digital" in the film world just like people for years talk about a similar comparison in the audio world, I dunno guys, I have yet to be impressed. Surely this 2006 with a $50M budget, big name actors, and high quality remastering supposedly supervised by the director who has been outspoken about image quality should be able to show off significant improvements in resolution if there were any from the final "cut". Alas, no such luck.

Looking around, some of the UHD Blu-Ray review sites are giving the image quality here 5/5 yet again ("the film arrives on this 2160p, HEVC/H.265-encoded UHD in a presentation that can truly be said to 'blow away' the previous Blu-ray master"). Another review gives the image quality 4/5 claiming:


"Naturally, overall clarity and definition receive a welcomed uptick, revealing a bit more info in the background, such as when characters walk through the streets and neighborhoods of Victorian London. Not only can we count the bricks of buildings outside and clearly see the exposed wooden laths behind the crumbling plaster, but we can distinctly make out the stitching and threading of the fabric used for the costumes. Faces are often lifelike, showing individual pores and the smallest, negligible blemish."

Well, I beg to differ as I am obviously not seeing all those wonderful differentiating characteristics compared to a fine 1080P upscale. In my opinion, this is 3/5 video quality - decent 2K-level HD resolution obviously from an analog film source but clearly not "Ultra" HD, fine for the material without much distracting noise/grain and improved color compared with the Blu-Ray released a decade ago. Significantly inferior to the best 4K video I've seen in any event.

Personally, while I liked the improvement in contrast and the overall warmer tone of the HDR remaster, I think this movie reminds us again that 35mm film, in practice is not "true 4K" in terms of achievable resolution. In fact, from what I have seen not just here, but with Blade Runner and even the 35mm scenes in Interstellar, the quality falls far short of full 4K potential. If there is indeed any resolution to be gained, it looks like the studio will need to work harder to show us where! Other than maybe really fine film grain, a standard 1080P Blu-Ray appears to be easily good enough for 35mm film resolution-wise.

Specifically, for a character-driven movie like The Prestige, with few special effects (other than Tesla's electrical discharges), there is actually no need for HDR since the colors are rather drab, and the lighting is typically dim and overcast. And without evidence of resolution improvement, I don't see a particular need to get this one on UHD Blu-Ray either. Like with Blade Runner, a standard Blu-Ray version using the remastered color/contrast levels would look excellent if they released such a version.

You might be thinking at this point... Other than Dunkirk (compared last month), is there any other movie that actually benefits from the 4K UHD Blu Ray?! Of course there is. I'll show you one next time :-).

Until then, have a great week ahead... Enjoy the sights and sounds!

Posted by Archimago at 23:06:00
Email ThisBlogThis!Share to TwitterShare to FacebookShare to Pinterest
Labels: 4K Video, 4K vs. 1080P