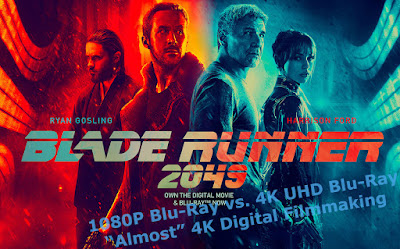 This UHD Blu-Ray video was encoded in HEVC 10-bit HDR10 with ~49.5Mbps bitrate compared to the standard Blu-Ray video encoded at AVC ~20Mbps. The movie is presented in 2.39:1 aspect ratio.

The procedure is the same as my previous posts using madVR to do high quality upscaling. In keeping this series of posts relatively consistent, we can at least compare not just between Blu-Ray and UHD Blu-Ray, but also get a sense of the difference between movies themselves: 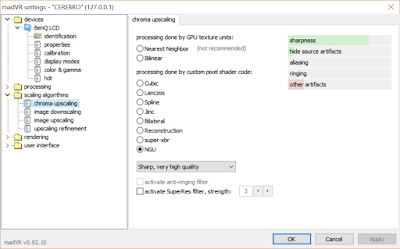 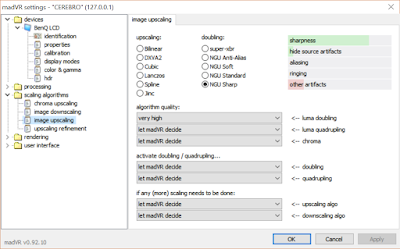 Again, the madVR HDR-to-SDR conversion parameters for the UHD Blu-Ray: 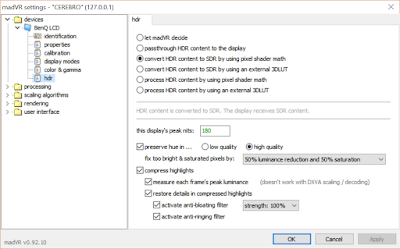 By now, we know the drill, let's get to it :-). There was a slight shift in the time code between the Blu-Ray and UHD presentations so I had to fiddle until I found the exact same frame to do the screen grab (a bit of a pain!). I'll just use the time code for the UHD Blu-Ray. 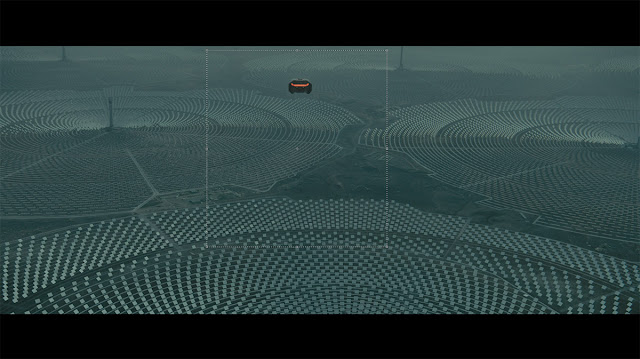 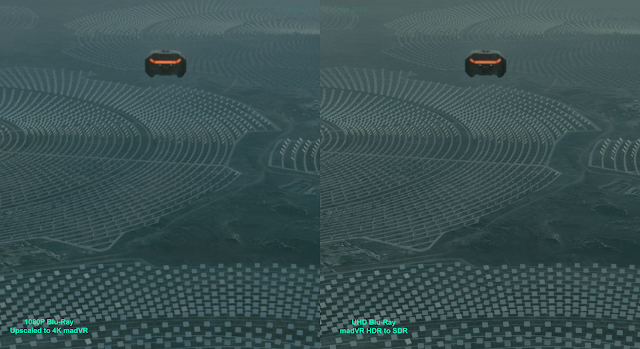 An encouraging start when it comes to resolution! Those are solar panels (based on the Ivanpah Solar Power Plant) so presumably despite the consistently bleak overcast skies in the future, there are some blue sky days to harvest a few photons :-).

While not the brightest or best contrast given the atmospheric haze, we can already see extra detail with sharper edges of the solar panels. Each panel also has more internal detail plus we see more nuance in the bottom right landscape of rocky outcroppings. 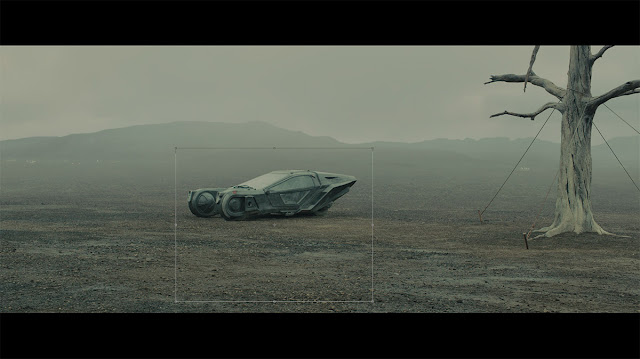 Had to take a screen shot of the Blade Runner "Spinner" VTOL flying car! Noticeable texture detail on the body of the vehicle. Also nicer contrast of the vehicle plus detail of the rocks/dirt in the foreground. 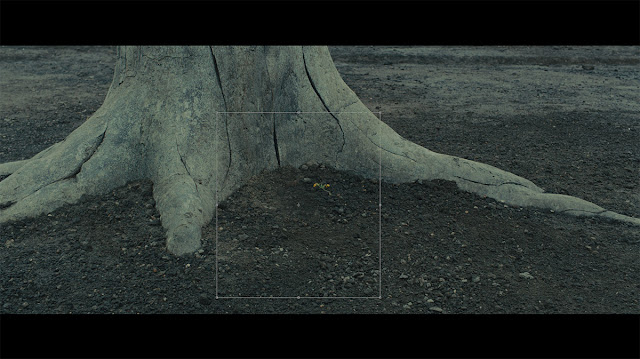 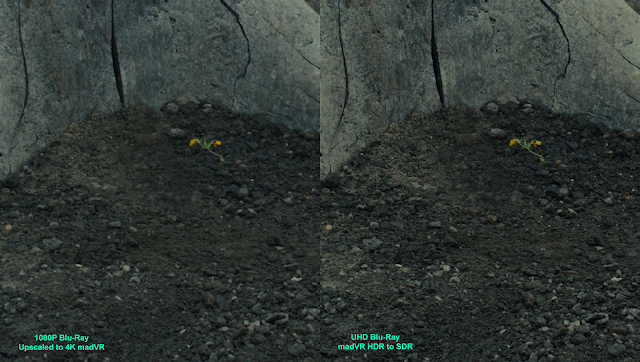 Noticeable improved resolution of the dead tree-trunk. Dirt, and of course the flower as a plot device all significantly improved. 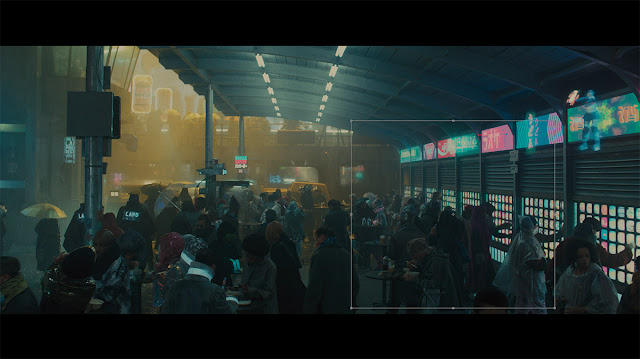 Like in the original Blade Runner, the city scenes are dark, tending to be rainy, and plain ol' murky... As expected, with all the haze, there's not much extra resolution to squeeze. Sure, you see the guy at the bottom eating a noodle in higher definition and the screens to the right look marginally better.

So while we can see improvements in many of the scenes elsewhere, the specific scene does need to be "ultra hi-def worthy" to show differences (not unlike music of course where if the audio is extremely dynamically compressed, there's no point using 24-bits). 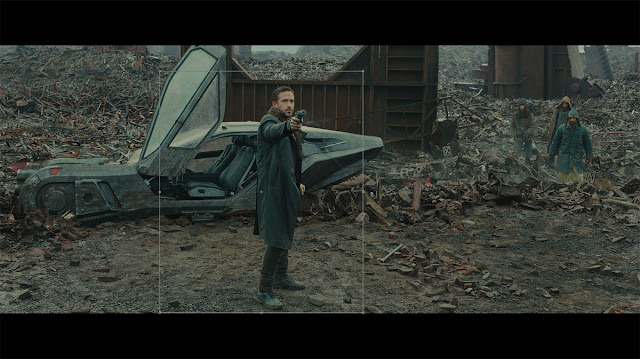 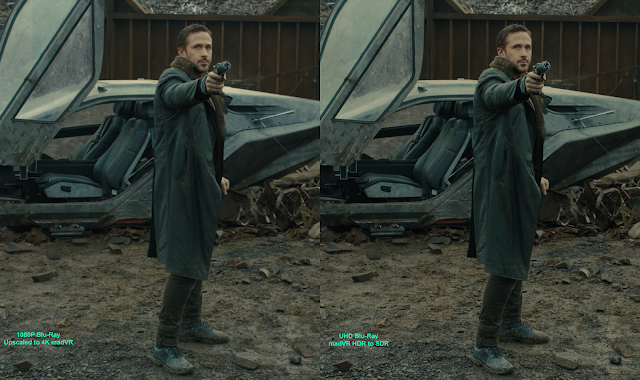 Here's Ryan Gosling's character Police Officer K. Things simply appear "clearer" with the 4K version. More details seen on the jacket, notice the fur (?) collar. Much more detail in the dirt, and texture of the Spinner vehicle behind out protagonist. 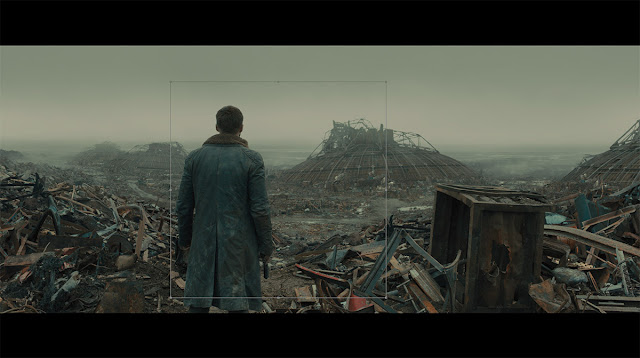 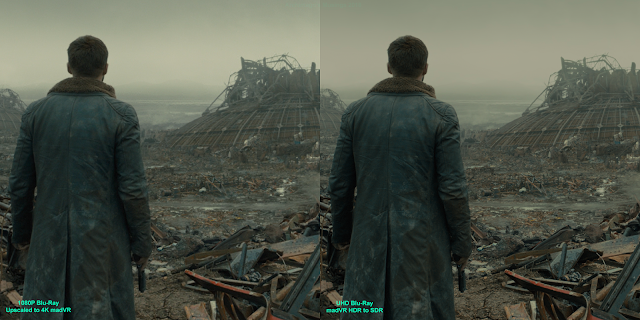 Oh man, what happened to beautiful San Diego!? It has become the dumpster wasteland...

Anyhow, it's pretty clear that the UHD resolution helps give us more detail to all the junk out in the distance. The 1080P looks quite good but clearly it's bested by the resolution in 4K (noticeable even without clicking on the image for 1:1 comparisons).

SUBIT asked about luma and chroma resolution differences a few weeks back. Converting the lossless screen capture into "Lab" mode in Photoshop, let's have a look:

Note that I "enhanced" the chroma image to brighten and increase the contrast to see the details a bit better. This is not a particularly bright or colorful scene. However, we can see improvement in the luma channel quite well. With this rather dreary scene, with the "eye of faith" we can make a case for better color definition here and there with the 4K/UHD version; the difference isn't that impressive though, but we'll look at this again later. 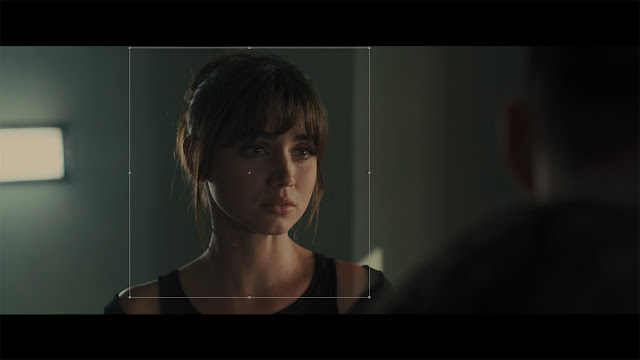 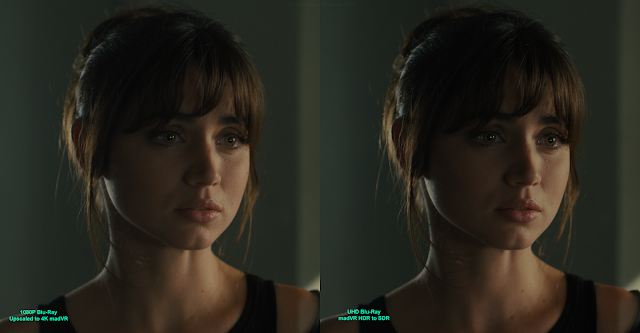 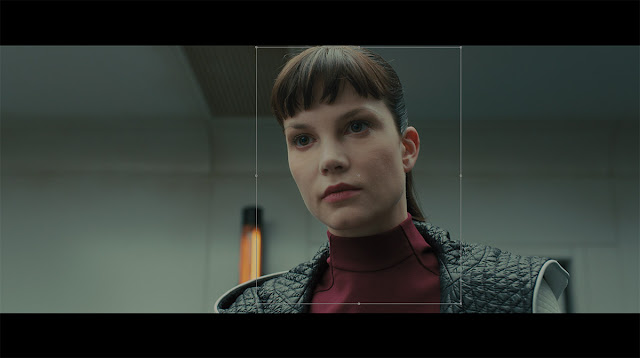 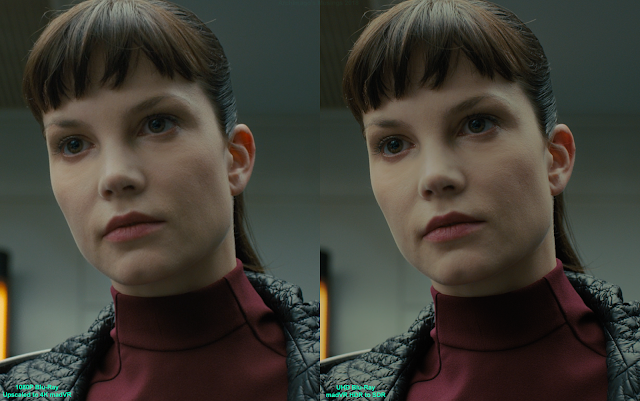 Likewise, here's Luv (Sylvia Hoeks). The scene is a bit brighter than the one above. Again, we can make out the improved 4K Blu-Ray resolution. Simply a clearer image. Notice that individual strands of the eyebrows can be differentiated in higher resolution. More realistic skin details. More "sparkle" in the eyes and detail of the iris. 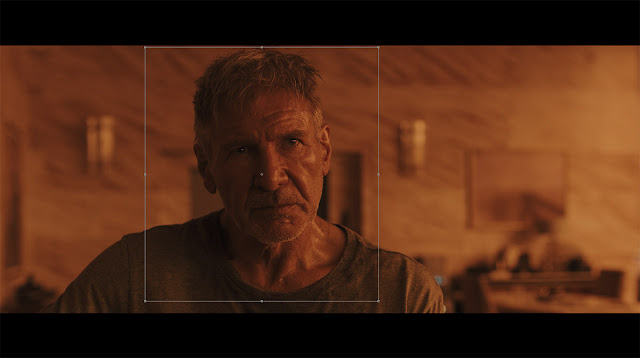 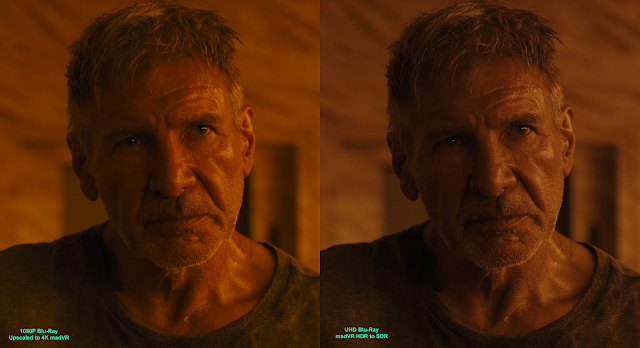 Wow. Looks like they turned off the soft filter on Harrison Ford :-). Some color tonal difference between the two. But wow, the detail in the 4K version is simply stunning with this tack-sharp frame! Skin lines, stubble, pores, the whole works...

Again, let's have a look at the luma and chroma channels: 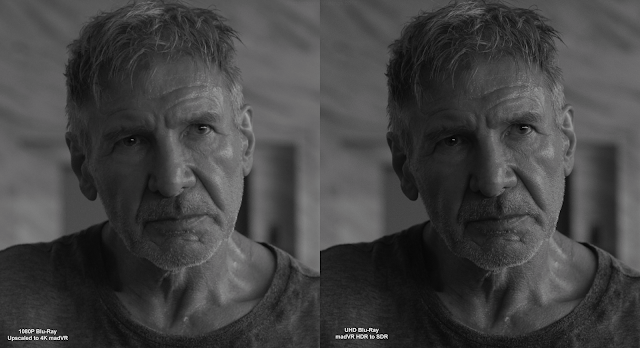 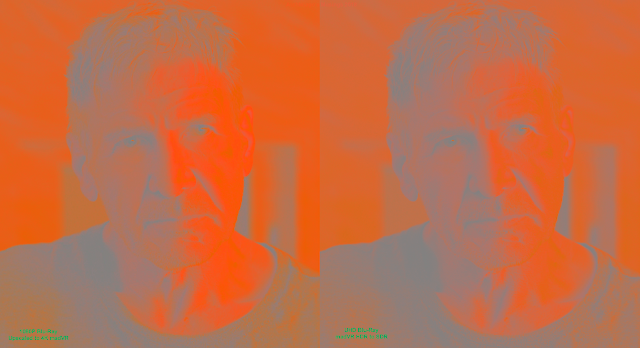 It's a rather orange scene so the chroma channel can be harder to analyze but there's more detail in the hair, around the eyes and eyebrows. The extra detail in the luma channel is again obvious and IMO very impressive. 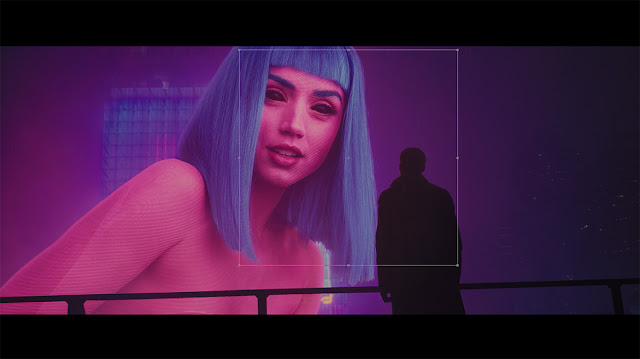 There's again more here with 4K. For example the "scanline" banding over electro-Joi's left shoulder and up the neck blurs out in the 1080P version. There are little details that add "atmosphere". You can actually see the streaks of rain in the 4K version significantly clearer (even if you can't see it here clearly on stills, in the movie during playback, it's quite evident on my screen).

Here's one where we can really see that the chroma channel "resolves" the scanlines composing electro-Joi quite noticeably. There's also more definition in the hair coloration. We also see a better rendition of Officer K's silhouette. Remember, even UHD Blu-Ray is 4:2:0 chroma subsampled.


Impressions:
I think it's fair to say that even though this is "nearly 4K", a movie captured digitally in 3.4K with similar 3.4K special effects rendering converted to the 4K DI looks very good! Clearly there is a jump in resolution going from 1080P to 4K with a movie like this. Plus of course there's a little bit more also from the HDR effect to differentiate the look of the film when watching it on an actual HDR capable screen. I think it's fair to say the improvement in resolution here is at least on par with the IMAX 70mm Dunkirk, making this movie "reference" quality video worth showing off for friends realizing that there is even more resolution potential to 4K. Out of 5 stars, I'd give the video here a solid 4.5/5 simply because there's still a bit more to hope for :-).

By the way, although the soundtrack is rather loud and compressed, the Dolby TrueHD-Atmos encoding sounds good (even without an Atmos set-up).

There's a recent article that claims Hollywood doesn't want us to buy UHD Blu-Ray based on the idea that Blade Runner 2049 (among others) is somehow a "lesser version" on disk because of HDR10 compared to Dolby Vision streamed off iTunes. While I think it's great that we're starting to see Dolby Vision metadata on UHD Blu-Ray now, I don't think we can say something is clearly "better" or not just because of Dolby Vision! Based on my experience with 4K streaming, the bitrates are significantly lower than the UHD Blu-Ray. From what I have seen, iTunes recommends a 25Mbps internet link so with VBR we're probably looking at realistic video bitrates between 10-20Mbps compressed H.265. Remember, Blade Runner 2049 off the UHD Blu-Ray that I'm showing here in the 1:1 crops is almost 50Mbps average video bitrate. So, even if Dolby Vision provides a more compelling color experience, on the whole, that would need to be balanced with the resolution and freedom from digital artifacts with the higher bitrate disk format!

I hope you've enjoyed this little series of 1080P vs. 2160P comparisons. I'm sure in the future I'll add to this little collection of comparisons. A summary then for completeness (with my video quality score):

Interstellar (3/5) - combination of 35mm and IMAX 65/15perf film source with questionable resolution improvement. I think they messed up the black levels so overall not recommended.

Almost forgot:
Blue Planet II (3-5/5) - while there are portions that look like they were filmed in 2K or even lower (low resolution, low light scenes for example), the 4K scenes shot with the 6K RED EPIC DRAGON camera/sensor look amazing; truly spectacular 5/5 demo material!

It's going to be a busy month with the upcoming Spring Break and business trip out to Boston (anyone with recommended audio store to visit???), so might not get a chance to post as much.

Recently I came across an interesting review by Darko on the KZE ATE IEM headphones which sells for <$15US on Amazon and only about $1 more for the KZE ATE Sport which features the microphone and switch to answer phones.

Over the years, I've unfortunately lost or broken too many headphones in my travels, so these days, I'm interested in a cheap pair that sounds good. Well, I got these the other day: 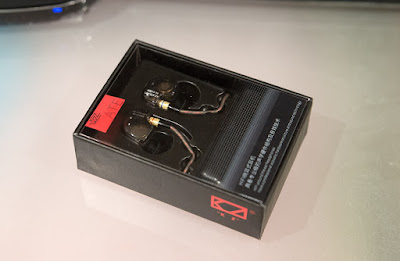 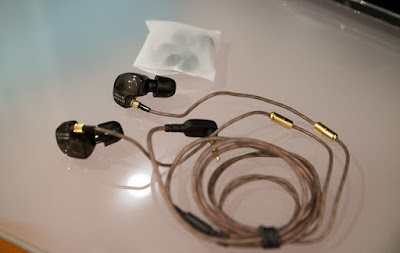 John Darko is right, for less than US$15, these are good. The cables are minimally microphonic, they block out noise quite well, build quality is certainly decent, and sound quality is excellent for the price! Not as good soundwise as the more expensive 1MORE Quad Driver I got a little while back but for the price, this is simply impressive as a pair you could give to family, friends and if lost or damaged, easily replaced.

Thankfully I have average sized auditory canals and pinnae so the headphone fits quite well with the default ear pieces (they've included 2 other sizes in the whitish bag shown above). They're reasonably lightweight. As usual, YMMV for comfort. I wish they included some kind of carry pouch, but one cannot expect too much at this price point given the sound quality already...

On rotation over the last couple of weeks at home have been Portugal. The Man's Woodstock (2017, DR6), Alexandre Desplat's The Shape of Water soundtrack (2017, DR9), and I recently came across Carla Bruni's French Touch (2017, DR7).

Carla Bruni's album is a rather unusual (to me) "easily listening" female vocal with many tracks to serve as audio show demo material :-). I think this is the first time I've heard Depeche Mode's "Enjoy The Silence", AC/DC's "Highway to Hell", and Rolling Stone's "Miss You" covered in this style. As usual, I wished they didn't compress the album as much - come on audio engineers, let's maybe aim for at least DR10 for these female "jazz" vocal albums please... It's not like this album is competing with the loud Top 40 pop on the radio! There were a few instances on the album where it just sounded a bit strained without some dynamic level overhead on my main system. Furthermore, what's the point of releasing a 24-bit 48kHz version for download when it's DR7 like this? The noise floor is extremely high and IMO there's no benefit and a waste of money going "hi-res" on a recording that doesn't even tax 16-bit CD resolution!

Until next time, enjoy the music and movies everyone!
Posted by Archimago at 10:01:00