I suppose in the future, SSD drives are the way to go. They have the speed advantage, smaller, lower power consumption, and should have great reliability over the years. The only thing that I have found worrisome with SSDs is that when they fail, they tend to go completely kaput with little warning; back-ups are mandatory as usual!

For the time being however, the best dollar-per-terabyte storage is still with hard drives.

I've been collecting CD's since 1988 - the first CD I ever bought was Rod Stewart's Out Of Order from a little long-gone music store at the local shopping mall paid with newspaper delivery money after school. Before then, I had a large collection of mainly 80's pop cassettes, many of these have been digitized into my library as well. Through the 1990's, my CD library grew as a bunch of used record stores opened; I remember hanging out after university classes at a long-closed store called Tramp's in Calgary, Alberta during those years. By 2000, I started buying SACDs and DVD-A's, many with multichannel content that over the years have been ripped and converted to 5.1 FLAC.

The process of bit-perfect ripping of all the digital media I had until that time began around 2001, completed by 2004. But of course this was not the end of the collection process by any means...

The music library expansion got even larger by the early 2010's as lossless hi-res digital downloads got going. I suspect like many audiophiles, I became curious about all the content available through HDTracks and went a bit wild with acquiring my favourites. Although I had a number of vinyl rips from friends prior to 2014, I finally got my own turntable and ripping set-up then, capturing the audio in 24/96 (because everybody claimed vinyl playback was "hi-res" :-).

These days, DSD is essentially extinct for new music, there was of course a brief time around 2014-2015 when the Industry tried unsuccessfully to revive this encoding system with DSD downloads primarily based on SACD's DSD64 but with some albums released as DSD128 and DSD256. I still have a number of .dsf in my collection from this time period which I've converted to PCM for compatibility (conversion is transparent, no sonic difference with good hardware).

Finally, over the years I have made recordings of live performances of friends and their bands as part of my library. Most of these done in 24/96 of course which provides latitude in the future for editing and resampling.

While I have been making sure the music is properly tagged (takes a bit of discipline I must admit!) with a consistent directory structure for various genres, as I survey the collection, this lifetime of music "data" collection has resulted in a hodgepodge of directories spread over 6 hard drives (3 + 3 backup) in my home network. I noticed recently when upgrading to Windows Server 2019 that some of the drives were getting rather old, including a couple of 2TB Western Digital Greens from 2010! Too disorganized for my taste and time to refresh and consolidate...

So I got these: 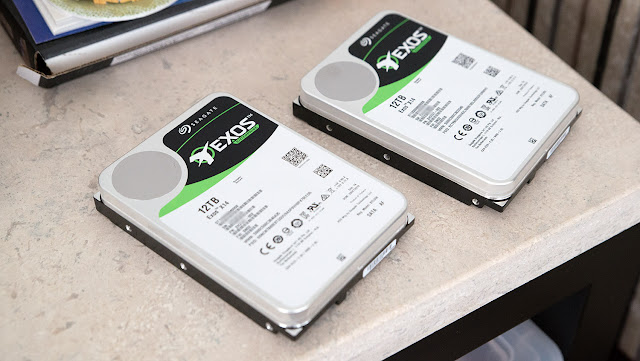 As you can see, these are a pair of 12TB Seagate EXOS Enterprise X14 (~US$300 each) drives. In theory at least, these "enterprise" drives meant for data centers are designed to be more robust than the typical desktop storage. They're faster than typical WD Red NAS drives and have a 7200rpm spin speed with 256MB cache. I'm seeing about 20-30% real-life faster copy speed. These newer generation drives also are helium filled, run cooler, uses less energy per terabyte (about 5W idle power usage for 12TB, up to 10W in use). While reliability is always a bit of a lottery with spinning drives, these come with 5 year warranty (starting from manufacture date so more like 4.6 years since mine were made in late 2019), and are rated at 2.5M hours MTBF (mean time before failure) which is 2.5x that of something like the WD Red hard drives.

For my Server machine, once installed, the main storage HDs are then a combination of these Seagate EXOS and a couple of 6TB WD Golds from a few years back inside: 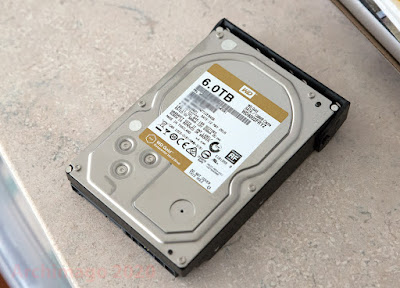 A friend asked me the other day to compare the WD Gold vs. EXOS X14 drives. I didn't notice too much difference. The newer EXOS ran cooler overall, data transfer speed was about the same. Remember that "enterprise" / "data center" drives are meant to be robust but not particularly quiet! The EXOS X14 is a bit louder than the WD Gold with spin-up noise. Both have head seek noise more noticeable than with typical desktop hard drives from the last 15 years. It's probably best not to have these on all night in a bedroom and definitely no spinning HDs in the audiophile sound room. However, this kind of noise is nothing of concern compared to loud hard drives of yesteryear for those of us old enough to remember pre-Y2K SCSI models and drives in the 386/486 era :-). Anyways, the drive noise didn't sound any different between the Seagate and WD Gold once inside my computer tower case and was well attenuated in the Mediasonic 8-bay USB 3.1 enclosure.

This is the first time in more than a decade I've tried Seagate drives in my machines so hopefully they don't let me down!

A side note: I tried a 10TB HGST Ultrastar HE10 a little while back. I found it too much of a hassle with the SATA power pin-3 issue related to Power Disable on some models. It's a useful feature to remotely power-cycle a drive instead of manually sending someone to do the job in a data center, but of no real value on desktop or home server machines. Furthermore, for some reason, that HGST drive did not like my Server computer's motherboard SATA controller. It worked well on my other computer though but I returned it due to these hassles/compatibility issues.

Since the hard drive update, all my albums have now been consolidated into a single 12TB drive with the second drive acting as mirror back-up. All the old WD Green and Red drives have been retired to storage. The new drives feel slightly faster, certainly more convenient to have all audio data together, lower total power utilization, cooler, and probably overall also quieter (since each EXOS replaced 3 drives). Remember though that there is a benefit with smaller drives in that failure at least will not potentially take out as much data at once. However, if the future is massive SSD capacity, I just need these enterprise HDs to last the next 10 years or so until cheaper SSDs are available. :-)

In total, I see that I have amassed close to 7.5TB worth of music data over a lifetime, mainly as 2-channel FLAC, with some DSD/SACD rips, and a decent amount of 5.1 multichannel as FLAC also. Here's a peek at my Roon front panel the other day. 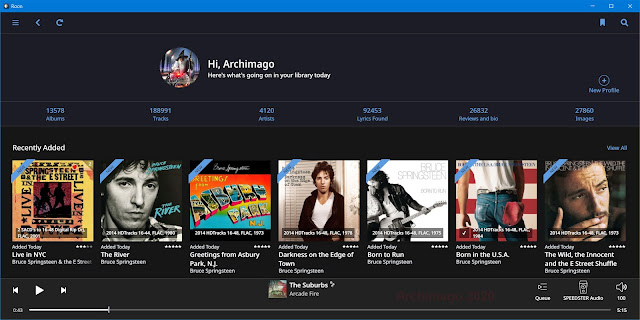 About 13.5k albums these days total on my local library, not including multichannel/DSD stuff which Roon isn't asked to deal with. In reality many of those "albums" are actually singles. Furthermore, some titles are duplicates since I have a few versions of Kind of Blue, Dark Side, Dylan, Beatles discographies, etc. (pretty typical of audiophiles, right?!). Notice that I had been fooling around with my Springsteen collection the day before I took that screenshot with some 16/48 resampling - we'll talk about this another time.

7.5TB is admittedly a lot of data. As someone approaching 50 years old, have really little interest in subscription-based streaming music (I can basically preview anything I want on YouTube already and prefer to just buy what I want!), and have noticed that little of the "new music" these days really interest me, album purchases have dropped dramatically compared to 20 years ago when I would visit stores and routinely pick up 10 albums a week easily. I suppose that's what happens as we get older, solidify our interests, and develop other pastimes, plans, and responsibilities. As I mentioned years ago, there's already a lot of music out there; easily a lifetime can be spent mining the good stuff of previous decades! I'm still discovering artists from the 80's even - for example, I listened to some Brenda Russell and Paul Davis the other night I had missed all those years ago.

Now that both my kids are teens and love listening to music, I notice that they have little interest in collecting music. Compared to when I was that age, neither they nor their friends seem to care about new album releases, have little interest in being "fans" of artists, and appear to be completely content with free online streaming options. Regardless, they're welcome to my collection of digital "dad music", CD/SACD/DVD-A's, and vinyl when I'm done with all this. :-)

BTW, happy Father's Day as I post this weekend.

Let's end off with a fun bit of interaction I hope!

Tell me, how much digital audio storage do you have? And below that, a similar question since one could have tons of storage but little music, currently, how much digital music do you have? I've added my votes already with 12TB storage (more like 11TB once formatted and all) and about 7.5TB of music (so "10-12TB" storage, and "6-8TB" music).

All data collected anonymously of course. Nobody's going to report you for an episode of A&E's Hoarders. As you can see, I'm already in rather bad shape! :-)


How much storage do you have for your digital audio (not including backups)?
Created with Poll Maker


Approximately how much digital audio data do you have (including PCM, DSD, hi-res, multi-channel, MP3, AAC, etc...)?
Created with Poll Maker


NOTE: I created these polls more than 2 weeks back so the number of days of voting should be subtracted by 17 days in the results.
Posted by Archimago at 09:17:00