Fast forward a few decades and we're now at a time of ubiquitous digital audio. Bit-perfect CD ripping into a computer can allow us to create the digital data from the CD into .wav and .flac files, but unless we pay attention to it, the pre-emphasis flag can be easily lost. If we are to rip the whole CD into .bin/.cue format, we can see this "PRE" flag turned on for such pre-emphasized CDs. For example, here's a snip of a .cue from an old Pink Floyd Dark Side Of The Moon. 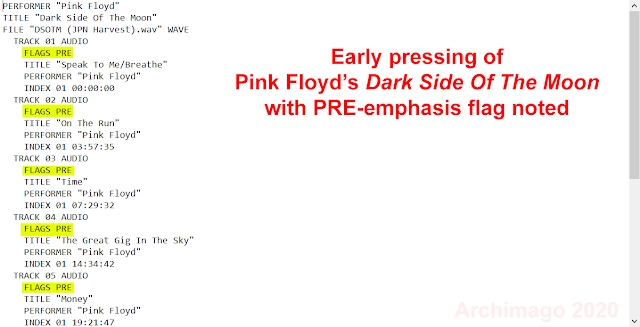 While I believe some ripping software like iTunes will apply the correct de-emphasis filter, most ripping programs I've seen will ignore the flag, leaving you, the audio lover, to try to deal with these unfiltered files. Sometimes, as with dBPowerAmp, the ripper can at least write a metadata tag for the file and hopefully you can use the playback software like foobar to play with de-emphasis DSP when it sees that tag (see this thread). Although this is a solution, it does require extra work on the playback set-up and personally, I would prefer that I just process once and keep the "proper" sounding version on my music server.

To make matters worse, there are CDs that appear to have pre-emphasized content but did not bother to turn on that PRE flag! This results in highly "tinny" and harsh playback... One wonders if in some instances, this might represent a subset of the complaints around early CDs sounding too "thin".

I was inspired to write this because a couple weeks ago, a friend wrote to me that he finally got around to ripping some old CDs and he had an old Spandau Ballet Truth CD that just "didn't sound right" when copied to his music server. He sent me some samples and to me, the tonality was that of pre-emphasis applied yet when I checked with him and the .cue file, the CD did not have that "FLAGS PRE" turned on!

For the sake of education ("fair use"), here's a ZIP file containing 45 seconds of the original song, what I believe is the pre-emphasized "Truth", compared to a de-emphasized version for your listening comparison:

While the synthesized parts already sound a bit shrill without processing, it's the vocals that particularly stand out as being overly bright and unnatural in the original "pre-emph" file. To be honest, I don't know if Truth is supposed to be so bright sounding but I think the de-emphasized version is much more tolerable. I would not be able to sit through the unprocessed album from start to finish! Furthermore, the processed version sounds closer to the 2003 remaster which adds to the idea that my friend's early pressing was missing the flag.

Remember that pre-emphasis basically applies an EQ curve which boosts the high end and needs to be reversed by the de-emphasis process. Here's a graphic of the de-emphasis filter from an old Sony CD/SACD player I found online: 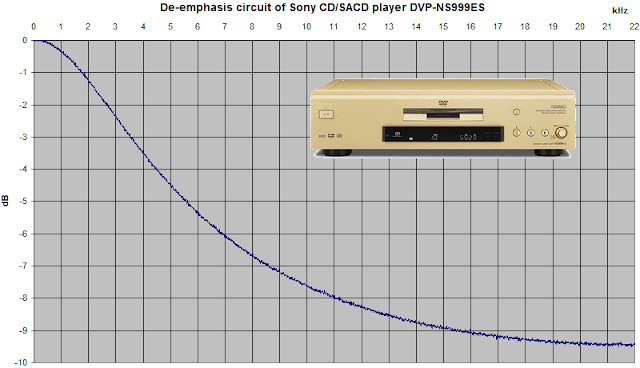 As for the demo track above, we can compare the original and the processed de-emphasized versions with the FFT of those 45 seconds:

There are a number of ways you could de-emphasize. You could create your own EQ in an audio editor - here's a great post showing the target formula and a table of the amounts. As touched on above, in foobar, there are components you could use for de-emphasis as well.

My favourite however, which I believe is the highest resolution method, is by using SoX and its built-in de-emphasis filter. Here's what I would do:

2. Extract that download to a convenient location. I put it in my C:\ drive. You should see the sox.exe file in that directory.

This makes it so that if we issue C:sox.exe, we should run the SoX program without doing anything fancy with paths.

4. Now copy this line and put it into a file in your directory with the pre-emphasized music; I call it "SoX De-Emph.cmd" (the exact name doesn't matter of course):


[Thanks Bennet for the -b 32 flag instead of floating-point as per comments.]
So for example, using my friend's Truth with tracks ripped into individual FLAC files, the little batch file will be in its midst: 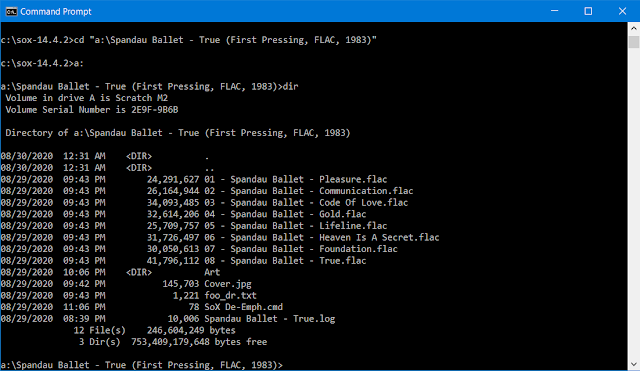 5. Now issue the "SoX De-Emph.cmd" command and you should see that it'll go through each *.flac file in the directory, processing them to create 32-bit 44.1kHz .wav as the de-emphasized output: 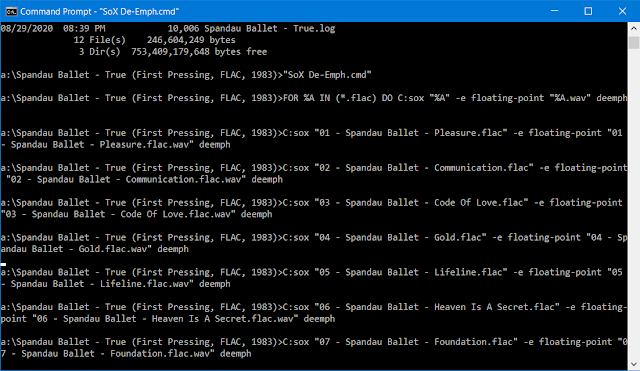 6. Congrats, you now have high precision 32-bit de-emphasize .wav files to work with. 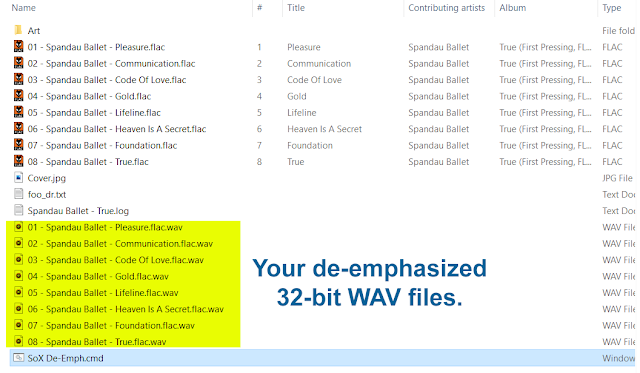 7. I leave it to you what you want to do with these 32-bit files. The simplest is just to delete or move the .flac original and convert the de-emphasized files straight back to 16-bit FLAC with something like dBPowerAmp. TPDF dither is good - remember these CDs originated at a time when true 16-bit resolution was either rare or simply unobtainable so don't feel like you're losing any resolution by converting back to 16-bits! 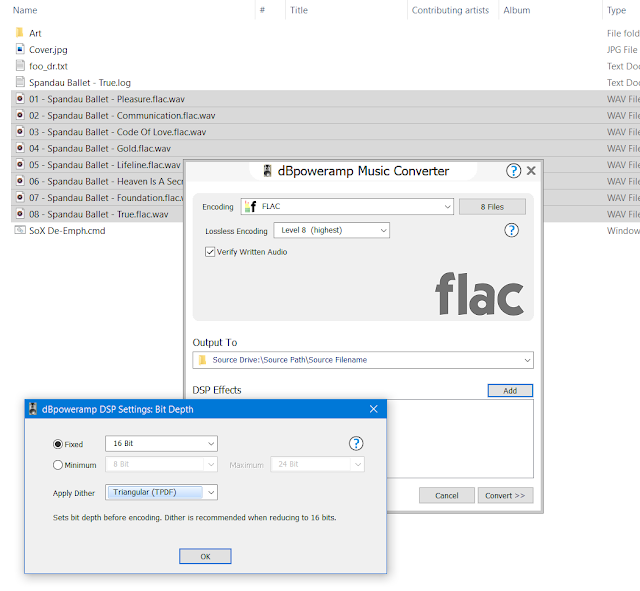 If you want to be even more fancy, you can check the maximum amplitude for the album and use software like iZotope RX 7 to add extra gain and perform the dithering with settings as desired (similar to what I do with "hi-res audio" in general).

For those who don't want the fuss of the 32-bit files, in the batch command file (step 4) use this line instead:

This will create standard 16-bit .wav output that can just be converted to whatever lossless format you prefer, tagged, and be done with it.
As discussed a few years back, I'd like to emphasize proper tagging of one's albums. So for example with this Spandau Ballet album, I'll call it something like "True (De-Emph'ed First Pressing, FLAC)" so I can remind myself that the data was altered with de-emphasis filtering applied.

That's pretty well it. Thankfully, pre-emphasized albums are rare especially these days unless you're seeking out some old "first press" CDs. If you have a large CD collection gathered over decades, I suspect you might already have a few. Since I've ripped all my old CDs years ago, it has been awhile since I've had to do this.

I hope this can be helpful and as reference if you ever come across such a scenario. Remember to think about that "pre-emphasis" feature if you run across strange-sounding old CDs from the '80s and '90s with weirdly "sharp" and "harsh" tonality.


--------------------
In other news, as reported a couple weeks back, I see that vinyl from a dollar perspective is now outselling CDs in the first half of 2020 in the US. Considering the cost of new vinyl these days, how cheap CDs have become, and digital audio revenue being now 85% from streaming services, I guess it's no big surprise that physical digital products are well on its way out (I suspect this includes video formats like Blu-Ray and UHD Blu-Ray). Other than a few dinosaurs like myself, my non-audiophile friends, my wife, and kids are just streaming lossy audio and seem very satisfied.
I'm not sure I see this vinyl news as worth cheering about from a sound quality perspective. As far as I can tell, most new LPs are sourced digitally anyway, and it's not like vinyl is capable of better playback resolution as discussed years ago although the mastering might be better. To me it's just a reflection of LPs being a novelty for some, others are building a collection, and probably companies pricing the product how they can as people are paying little for digital music these days (deflationary cost pressure digitally and inflation on the analogue side). Who knows, perhaps the pandemic is allowing music lovers to spend more on vinyl instead of attending concerts.
As I highlighted in italics above, the news is about "dollar sales" comparing LP to CD. Let's look at a couple of graphs to put things into perspective straight from the RIAA: 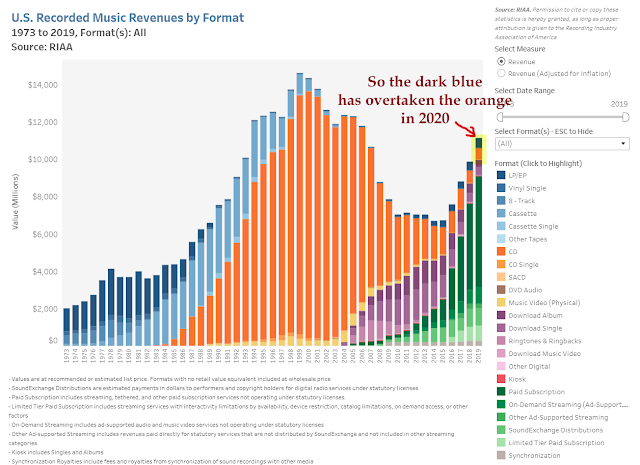 The headline news is basically that the blue "LP/EP" amount has now overtaken the orange "CD" bar. Notice that things were pretty close by the end of 2019. Notice the rise of the green streaming amounts accounting for the vast majority of revenue. In 2019, sales of "LP/EP" + "CD" physical product together was only 10% of the total music sales revenue.
What's even more interesting I find is this: 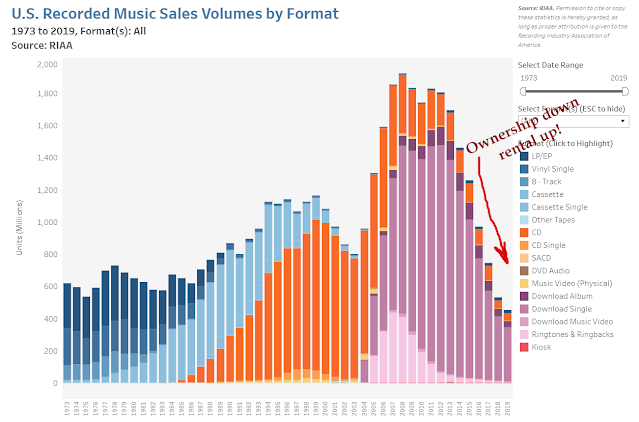 These are sale volumes of music media. As you can see, when we exclude streaming, actual sales of "owned" products which include downloads have been dropping to the lowest volume ever since 1973! Basically as I wrote in the chart - "Ownership down, rental up!" for music. This graph also illustrates the importance of thinking in volume, not just dollar amounts. Notice that although in 2019 "LP/EP" revenues were close to "CD" revenue as in the first graph, the actual volume of LPs sold is very low in the second graph. This again is a reflection of that price differential... LPs simply sucking in more money from the consumer for fewer units of music "consumed".
According to the Guardian article, in 2020, vinyl sales reached "$232M" or "62%" of total physical revenue (thus leading CD sales). This means the total physical revenue was $374M in the first half of 2020. Consider that the total LP+CD sales in 2019 was $1112.1M, this means sales of physical media in the first half (50%) of 2020 is just shy of 34%! Hmmm, unless sales pick up in Q3/Q4, it looks like another year of losses for physical music media. Physical media volume has been in decline for basically 20 years straight.

From my perspective, this is not necessarily a bad thing...

As one who is trying to keep my energy expenditure and "carbon footprint" low for the last number of years, I'm reminded of vinyl as a type of plastic and has environmental impacts even if only a small global contributor. Likewise, CDs are made of plastic as well but less material used than an LP. Every little bit adds up, right?
Finally, remember that there are regional differences when it comes to music consumption. For us Canadians with a sagging dollar over the last few years, vinyl sales have dropped by >20% in 2020 compared to 2019. This will in all likelihood be the first down year for LPs after about 9 years of growth here in the North. It will be interesting to see if this is a "slump" or the bursting of a bubble.
Hope you're all doing well and enjoying the music as we enter October...