SUMMER MUSINGS: No... Not all amplifiers sound the same (but many do! ;-).

With both my Class D Hypex nCore NC252MP amp and linnrd's Class A Pass/First Watt SIT-2 in my sound room a couple months back, this allowed me to switch reasonably quickly between them to listen. You might be wondering about some comparison comments on how the amps sound. Certainly much has been said in the press about sonic differences between amps over the decades, but relatively little has been shown with measurements in an actual room using what comes out from the speaker.

First thing I'll say is, "No, not all amplifiers sound the same!". This should be obvious actually when looking at the objective measurements of the amplifiers and what they mean if we extrapolate the results to a known system.
Like I said, it seems uncommon to see measurements "in situ" with amps connected to the same DAC, preamp, and speakers to show differences. To demonstrate the differences in my room with my speakers, I set up the miniDSP UMIK-1 microphone in the room like so to run some sweeps and tonal FFT's for comparing: 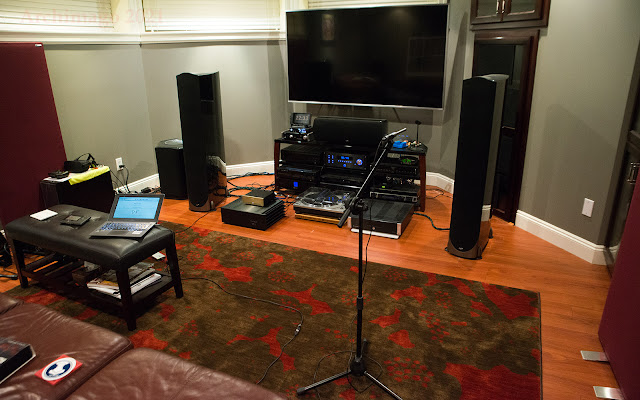 So what I've done here is set the microphone a bit further than 1m away from the right speaker along the front tweeter axis as the consistent point of reference. I have the laptop shown on the left connected to the RME ADI-2 Pro FS Black Edition DAC for signal generation. In the picture above, the small Hypex nCore NC252MP amplifier is currently turned on, playing the test signal, sitting on top of the Pass amp.
Here are the frequency sweeps using the Hypex nCore vs. the Pass/First Watt SIT-2, targeting around 85dB SPL (1kHz cursor at 86dB SPL using both amps), playing to the right Paradigm speaker, room correction DSP obviously turned off:

As you can see, even though we're using the same DAC, preamp, cables, speaker, measurement microphone, and room, the in-room frequency responses with the 2 amplifiers are clearly not the same. We can appreciate that the frequency response from the Hypex nCore Class D amplifier has maintained stronger upper and lower frequencies while the Pass SIT-2 allows for a relative reduction in both the highs and lows, thus relatively accentuating the midrange in comparison. This is despite both the SIT-2 and Hypex NC252MP having relatively flat measured frequency responses with typical 4/8Ω resistive loads; a nice reminder that resistor loads are not typical speakers.
To make it easier to see the difference, here's a plot of the delta between the Hypex over the Pass SPL across the audible frequencies: 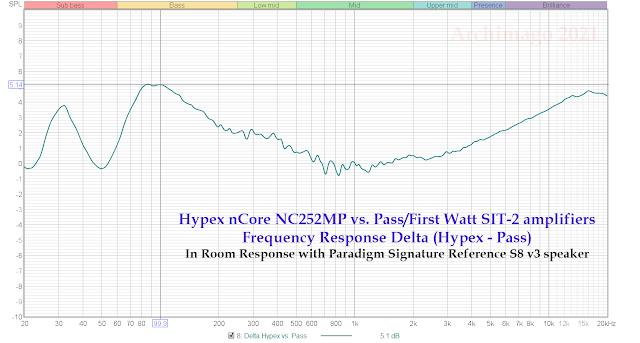 As you can see, there is up to 5dB difference between the amps such as at 100Hz where the cursor is. Clearly this kind of tonal difference would be audible!
Notice that the 3-way Paradigm speaker has impedance dips in the graph above reaching their most extreme down to 3.5Ω both in the high and (more chaotically) lower frequencies. This would at least to a significant part explain the frequency response variations between the Hypex and the high output impedance (low damping) of the Pass SIT-2. There is more here in that I am not showing the electrical phase variation which would interact to create an even more complex "effective" impedance (this is where calculated EPDR "Effective Peak Dissipation Resistance" could make a difference).
For completeness, here is the very significant spread in damping factor offered by the two amplifiers. On average, the Hypex achieved 340x damping factor compared to the SIT-2's 1.6x into 4Ω! Use of feedback in the amplifier design will play a huge part in this result:
Furthermore, yes, while harmonic and intermodulation distortions might be difficult to hear, they can be shown to be different during speaker playback at normal volumes. For example, let's have a look at the Triple-Tone Distortion signal I use in my amplifier tests, played back at 80dB SPL level using the Hypex vs. Pass. With an in-room sensitivity of 92dB/W/m for the Paradigm speaker, we're only asking the amplifier to produce around 0.1W:

- Flat frequency response 20Hz to 20kHz measured with a typical resistive load (like 4Ω).
- Low distortion <1% THD for whatever maximum watts you need (100W into 8Ω likely adequate for most of us).
- Adequately high damping factor say 20x across the frequency spectrum for your speaker's nominal load assuming there are no prolonged portions of the electrical impedance curve dipping far below that.
- Low amplifier noise floor devoid of hum, hiss, noise spurs above your listening room's ambient noise level when the amp volume control is set to desired listening amount.

Likely, you'll find such "clean" amps will be indistinguishable in a volume-controlled blind test with actual music regardless of whether they're Class A or AB or D. Tube or solid-state. Lower or higher feedback.
Manufacturers love to differentiate and imply sonic differences using technical descriptions (eg. Class A, low feedback) and some audiophiles likewise might swear by them without evidence that such claims are true - or take the time to listen in a controlled environment, much less blinded!
As usual, some folks will also gravitate towards luxury products and the pride of ownership that can come with that. Yeah, tube amps can glow nicely and their physical "warmth" might accentuate the perception of sonic warmth. Likewise, big price tags and seeing an imposing 100lb behemoth amplifier in a fancy showroom may have strong psychological effects. When it comes to sound quality, let's try not to conflate "high fidelity" sound with the "non-utilitarian benefits" of luxury products.
I hope you're all enjoying a good summer, dear audiophiles. Stay safe, and enjoy the music!
Addendum: October 2021
Here's an interesting PDF of an old blind test article on amplifiers by David L. Clark and Ian G. Masters I believe from January 1987. There have of course been discussions and rebuttals like this.
Posted by Archimago at 10:49:00