Important and well-known companies, and small and unknown, so much so that even small Chinese companies advertise MQA in their products and even the latest DAC dongles necessarily include the logo of MQA and its light that makes you "Feel confident" about the audio quality you are listening to.

A "Damage" is being sold as a "Miracle" and everyone is forcing themselves to follow this path that imprisons music, forcing it to be in the control of MQA and to pay a tax for each passage in the musical line, allowing technical and economic Music's Supply Chain control (More than consumer DRM .. !!!)

Only a few brands (like yours) and few journalists (like Archimago) have publicly expressed themselves against MQA, but unfortunately today are only Isolated Voices, easily overwhelmed by the economic forces, advertising and MQA brand hype, which is easily taking possession of the entire field and that can inevitably oblige also your company to adopt it, under risks of substantial loss of big parts of market shares.

I believe that the only way to "Survive" will be to unite the forces of the producers and all the components of the Music Supply Chain (starting from the artists) who have no interest in having MQA extract a tax.

And this Audio Federation (including journalists such as Archimago), should produce simple and understandable Advertising Counter-Campaigns to convey to the end user the clear concept that MQA is useless.

I discussed of it with Archimago on his web blog. ..

He has proposed a slogan that seems clear and incisive to me ..

"Free the Music - NO MQA"
Thank you for the attention and I hope that this humble email can be an incentive to think about being able to "do something" for REAL Music Quality.

Wishing Merry Christmas Day and and a Happy 2021.

Over the years, I have heard back from readers about MQA and all that it represents; Maurizio's comment here being one of the longer ones where he also reached out to a couple of the companies. I must admit that since around the end of 2018, after all the tests with devices, plotting out the MQA filters, the review article for Computer Audiophile/Audiophile Style, and seeing the RMAF 2018 talk that Chris Connaker did, it's pretty clear that there are other things in the world of audiophilia to examine and explore. As much as it would be nice to leave MQA alone, it's honestly very hard because there are many facets to that story that are emblematic of problems within the "audiophile culture/myths" and the media that enable it.

The whole notion of journalism being an institution whose fundamental purpose is to educate and inform and even, one might say, elevate, has altered under commercial pressure, perhaps, into a different kind of purpose, which is to divert and distract and entertain.

Thanks John for the response. I've certainly seen the other link over the years.

I bet at this point you must be a bit tired about the "birth of a new world" quote (as I said in my original post, the whole "paradigm shift" thing refers to Harley). Alas, this quote from the first sentence of the article does make for quite an impressionable "sound bite". I appreciate that time has passed and it's possible that you've modified your position since then.

So just to be really clear about your stance in 2021 so those of us discussing MQA today do not misrepresent how you currently feel, perhaps you can just respond with YES/NO/MAYBE to these questions... I trust this should not be too difficult and take only a few minutes out of your day. More nuanced responses of course would be appreciated given your experience (especially for "MAYBE" answers).

1. Do you still think in 2021 (seeing that streaming audio has expanded to include lossless Qobuz, Apple, Amazon, upcoming Spotify) that the MQA codec (generally limited to Tidal, with some MQA-CDs out there) is "the future of streaming" that audiophiles should pay special attention to?

2. You mentioned in the article that the 1982 visit to Acoustic Research allowed you to hear DSP correction of "room acoustic problems", right before being blown away by MQA (thus implying some connection). Do you believe MQA has DSP technology that improves room acoustics?

3. After seeing what is known about MQA now, are you still thinking "WTF", and just as impressed by what was revealed to you that day on a technical level?

4. In your "Correcting the Source" section, you said, and quoted Meridian:

Meridian describes this as "taking an original master further, toward the original performance, in an analogous way to the processes expert antique picture restorers use to clean the grime and discolored varnish from an Old Master to reveal the original color and vibrancy of the work."

Do you think that this is true? That the technology has the ability to take a hi-res "original master" and move it towards this concept of an "original performance"?

5. With hindsight then, would you still say that the "launch of Meridian's MQA is as important to the quality of sound recording and playback as digital was 40 years ago"?

As a respected member of the audiophile press, writing for decades, exploring the technical performance of all kinds of devices over your lifetime career, I think many of us would appreciate your candid assessment of MQA in light of what clearly was extremely positive testimony laid out in 2014. As far as I can tell, I don't believe you have since said anything to question those impressions in that article.

Thank you for your consideration to have hopefully an open discussion and clear up any confusion/misconceptions.

-------------------------------
Let's see if we ever get candid responses to questions like the above. As it stands, whether it's Atkinson hearing the "new world", or Robert Harley feeling it's the "new paradigm", they're basically elevating MQA to the point of suggesting it can be even better than the master tapes, those "crown jewels". So in essence:
Anyone honestly believe this still as we approach the end of 2021?
It will be interesting to see with the TIDAL announcement just how many people will happily pay twice the price to stay in the "HiFi+" MQA tier instead of just downgrading to the lossless 16/44.1 and save themselves $120/year. (There's also the "free" ad-supported tier in the US.)
In the meantime, enjoy the music, dear audiophiles! Keep up the passion Maurizio from Italy...
Addendum:
One more thing... Let's be clear about a little lie. 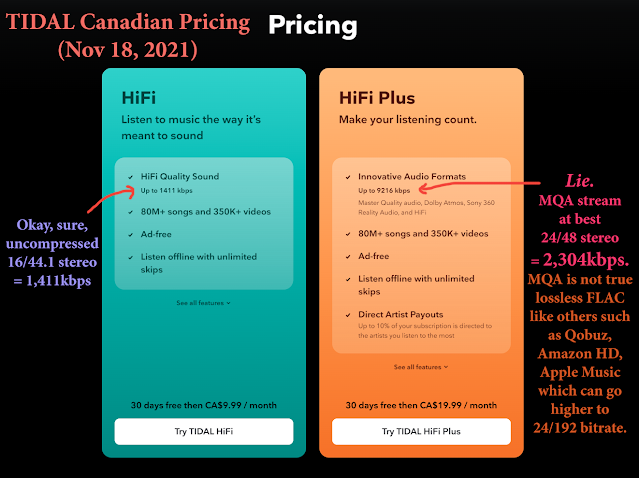 MQA pseudo-hi-res streaming is lossy compressed and not capable of the kbps they're claiming here. At most, the MQA stream is stereo 24/48 = 2,304kbps from TIDAL (assuming no lossless compression). If anyone can show me something higher, I'd like to see it.
Unfortunate the extent these folks will go to to exaggerate the numbers!
Posted by Archimago at 16:45:00