A couple weeks ago in the post on the Philips Golden Ear Challenge, I touched on the topic of hearing acuity and the importance of this. It's one of those things that seems to be taken for granted in the press and in audio blogs/reviews as if everyone who writes on high-end audio is capable of these feats of perception.

This week, I thought it would be useful to consider the topic of "silence". Music grows out of silence. Without silence - or to more accurately put it; a low noise floor in the listening room - it would be difficult to detect very slight "microdynamic" changes. Even if one were to pump up the volume, nuances can be missed. In part, this is why the "dreaded" dynamic range compression (volume compression) is used. It reduces the dynamic range such that even very "soft" detail is pushed up in volume allowing detection of these details on the subway and in cars (remember back in the day when we had "loudness" buttons on car music players?), as well as qualitative psychoacoustic preference to some extent. There is a limit to how far volume can be pushed in that at some point, we experience the sound to be intolerably loud or the hardware starts distorting - remember to always protect your hearing. Important characteristics of accuracy in reproduction - tonal neutrality (uncolored), and precise conveyance of detail (combination of good dynamic range & timing accuracy) - demand that the room be isolated from external noise as much as possible. It'd be a shame to listen to high quality audio at reference 75-80dB level but 50dB of that is affected by noise! Even worse than consistent background hissing, humming, or rumbling is random or episodic noise like frequent cars passing by or people talking outside distracting the virtual "concert".

Refer to the "Sound Pressure" Wiki page with the relevant levels at the bottom. For convenience, I've reproduced it here:
Nobody (that I know of!) advocates listening to music in an anechoic chamber of course. In a domestic sound room environment, your best bet for a quiet room would likely be in a basement behind closed doors unless one listens in the dead of night away from street car noise and domestic hustle and bustle. The professional standard for ambient noise is usually around 20dB(A) for the recording studio (check out this EBU Tech 3276 document for the gory details). As indicated by the red asterisk in the chart, we should try to aim for a very quiet 20-30dB SPL in the listening room; similar to the environment that the pro sound engineer would use as the reference.

In my home, as I mentioned last month regarding the HTPC in my sound room, I could still hear the hard drives spinning in that computer. A bit annoying, and this just won't do :-). So I decided to rectify the situation doing what I suggested in that post - separating the music/movie/data server component to another room and putting together a relatively low cost, less powerful computer which could act as a streamer. I extracted the fanless power supply from that computer and reinstalled the SSD with Windows Server; moving it into an adjacent room. Here are the pieces then for the new build: 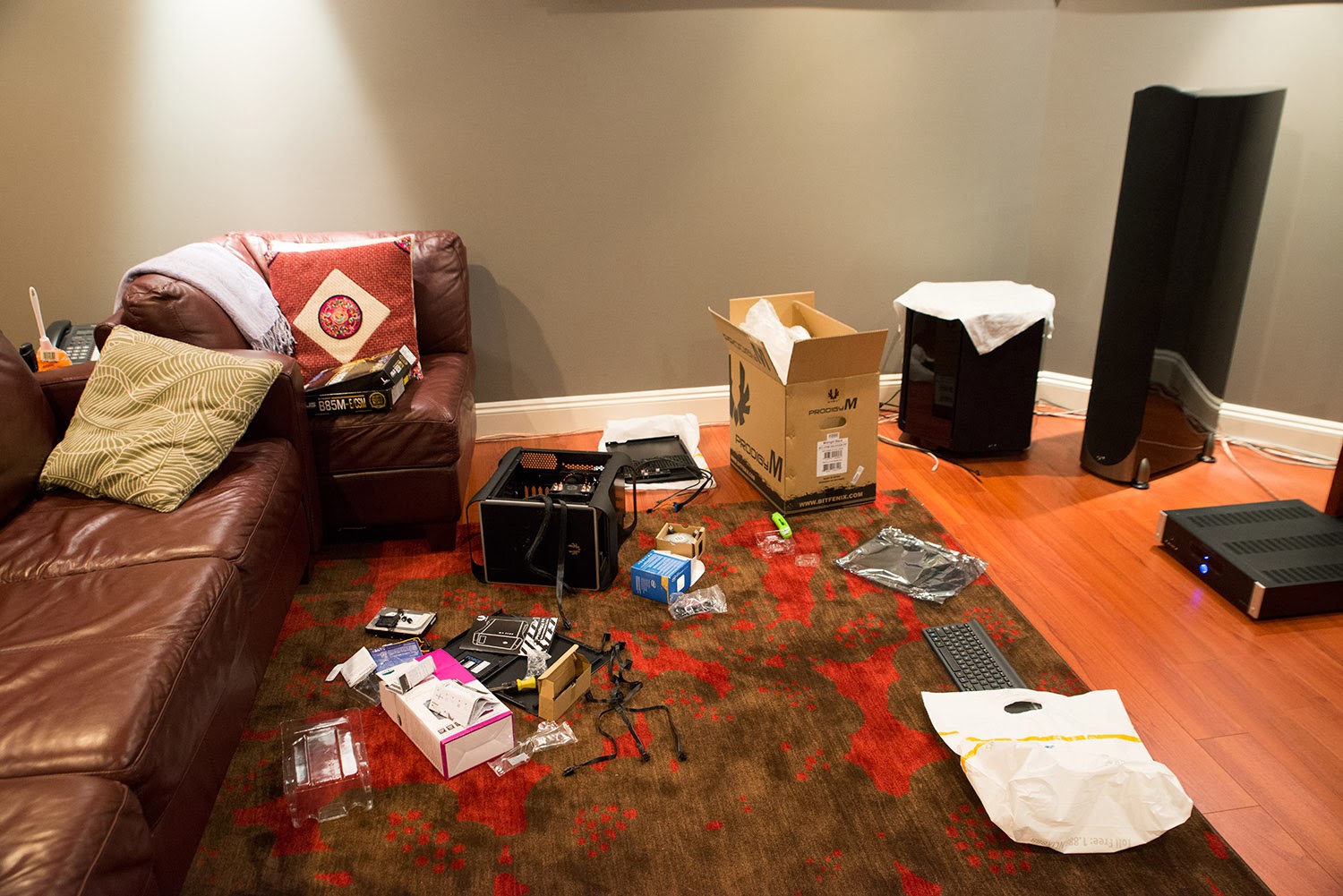 I installed Windows 8.1 Pro x64 on the system. Due to the oversized CPU cooler, I'm able to run the 120mm fan essentially silent between 20-30% speed and this is the only fan in the whole unit. No problem running 50 iterations of IntelBurnTest without any errors at "Very High" stress level while staying cool (I like using this program for stability testing more than Prime95; generates lots of heat within minutes). 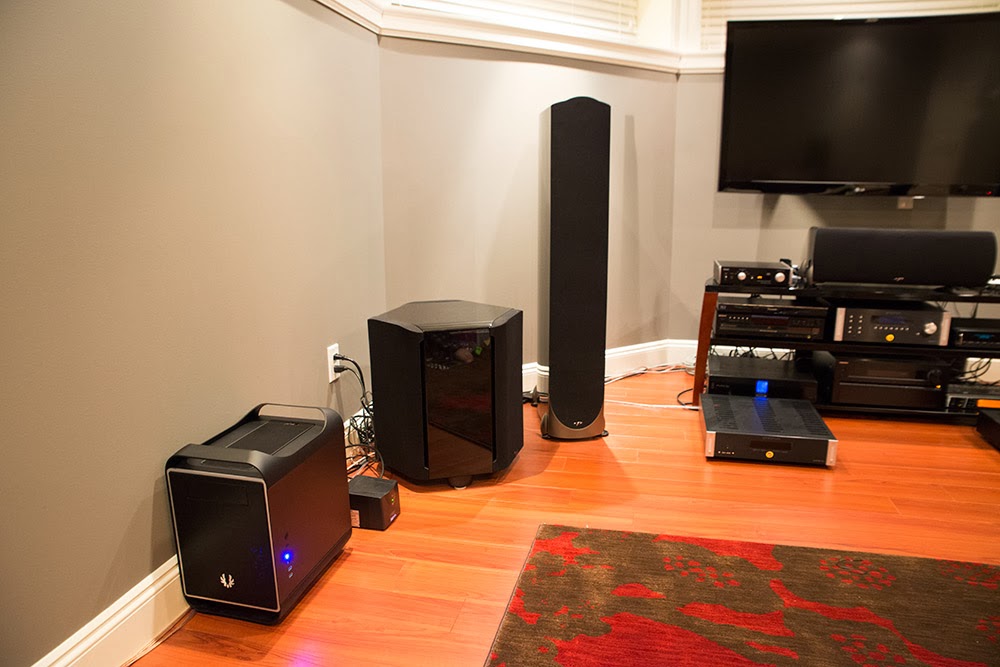 So far, I've streamed a couple of MKV 1080P movies in excellent quality 20Mbps H.264 plus DTS soundtrack - no problem at all. I also installed JRiver 19 and foobar as I described in that last HTPC article and have no problem streaming DSD64/128 to the TEAC UD-501 using USB2 and 5.1 multichannel FLAC to the Onkyo receiver through HDMI. The Squeezebox system (Transporter, Touch, Boom, Radio) connects directly to the Windows Server machine and has nothing to do with this HTPC.

All this is running silently with a reasonably fast machine for media playback purposes. I should be able to play 4K as well using the built-in Intel graphics off the ASUS motherboard's HDMI 1.4. I tried streaming some YouTube 4K videos and they looked great on the 1080P screen - they're decoding reasonably well without much framerate issue at least so it'll be interesting to see how smoothly (or not) they play on a native 4K panel one day assuming I'm still running this rig...

Out of interest, I decided to try measuring the background noise in my sound room using a calibrated Behringer ECM8000. Realize that this inexpensive measurement microphone is not meant for low noise purposes with a self-noise in the low 20dB range (according to this link) mainly related to the small microphone diaphragm. I'm certainly not about to spend something like $2000 to buy the AcoPacific PS9200KIT for this purpose (this can measure down to ~8dB(A)). I figure if I can get a rough estimate, it'd be good enough. So, using a Radio Shack digital SPL meter (which only goes down to 50dB) for quck'n'dirty calibration for the Behringer with REW, then letting the Behringer measure the "silence" at the optimal listening position, I'm seeing this:

Not bad. It can dip down to the 28's and up to ~31 over the course of a few minutes of measurement. Good enough as a ballpark estimate aiming for the 20-30dB target. Using C-weighting (which is a more linear response profile vs. A-weighting which corresponds to human hearing), I'm seeing ~33dB(C). Prior to this new HTPC build, I was seeing about 35dB(A) with all those hard drives spinning.

Even though the ambient noise level is low, my room still has not been treated with acoustic panels so the room reverberation time remains a bit high. EQ'ing has provided a reasonably flat response described previously (+/-5dB around the target Brüel and Kjær "house curve" with recent digital EQ tweaks). Absorptive acoustic panels remain on my radar screen - I'm still contemplating aesthetics.

Happy listening everyone. Make sure to take a minute and consider the "sound of silence" in your audio room...

I want to end this post on a more serious note (as much as I enjoy the topic of audio, it's only a hobby after all!)... I want to send my regards to Matt Ashland, the CTO of JRiver, the principle developer of Monkey's Audio (APE format - probably the most space-efficient free lossless compression system), and contributor to the DoP protocol (DSD over PCM). As some of you know, he had a fall in January and required surgical evacuation of intracranial bleeding; still recovering in hospital. I had the pleasure of exchanging E-mails with Matt last year around the time of the beta JRiver 19 release regarding the PCM to DSD transcoding algorithm, DST decoding, some bug fixes to JRiver, and his summer vacation with his kids. A truly genuine, generous gentleman and one of the unsung heroes of the computer audio hobby... My thoughts and prayers are with you and the family, Matt. Get well soon.

Matt has a CaringBridge page.

Given the price and performance of this CPU, I can't imagine any reason to build anything less powerful these days. I think it would be no problem running this fanless with a good sized heatsink if I underclocked it even further; 2GHz dual core with lower voltage fanless probably would be totally fine!