Hey there everyone... The 24-bit vs. 16-bit audio survey has now surpassed the 100 responses "milestone" which I unofficially set as the minimum I wanted to achieve for this test. Thanks to all who have already submitted to the test results and please keep them coming - the more results the better the statistical power... You have until June 20th. Still looking for some Russian input to fill out the international effort :-).

Over the last few weeks, I finally bothered my father enough to drag out the old turntable for a spin. It's a "vintage" Sony PS-T15 from the early 1980's - he bought it with an old Sony receiver, tape deck and Sansui floorstander speakers in 1981. Just a couple years before the CD juggernaut started rolling. I essentially grew up with CD as the primary music collection medium although did play some LP in those early years (along with a collection of cassettes). It's a "middle-of-the-road" model from Sony that's supposedly a step up from the "L" series but below the Sony "audiophile grade" "X" series. Although old, the condition is still VG+ with the only blemishes being the top transparent plastic cover slightly scratched from the moves between homes and cities over the years. The direct drive motor still spins smoothly and quietly, and the tonearm looks and functions decently. Pitch control is functioning accurately. I suspect this works better than many current-model inexpensive consumer turntables. 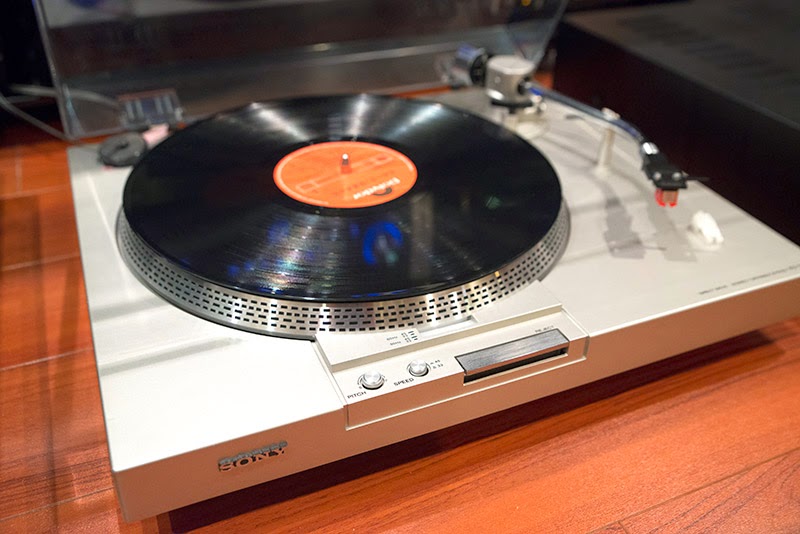 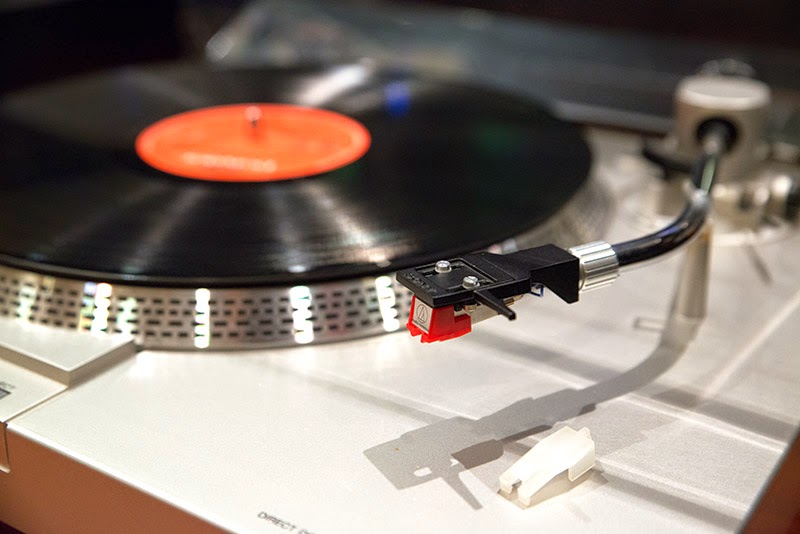 As you can see, there's a long discontinued Audio-Technica AT70 MM cartridge in place. The stylus still looks good under a loupe.

I reacquainted myself with the turntable setup routine (here's a good AXPONA 2014 video from Michael Fremer - funny interchange around 20 minutes vs. CD). I've still got lots to learn about this but I did reseat the cartridge and cleaned the contacts, reapplied the counterweight and antiskating settings, realigned with a protractor (check out some free ones on Vinyl Engine), leveled the unit, etc. Good enough for now... Grabbed an inexpensive Spin Clean Starter Kit MKII, and went to work getting the gunk off some very old records in boxes which have not seen the light of day in decades!

I must admit, after having not handled LPs in at least 10 years and more than 20 years since using a turntable with any regularity, this has been fun... Without doubt, psychologically the act of setting up even something as simple as this "non-audiophile" gear taps into a different kind of mental "reward center". It's a sense of achievement brought about by the ritual. To hold in hand the 12" vinyl disk, and examine the full-sized LP cover brings with it a different kind of "joy" which for me isn't really about the sound quality, but rather caters to the "collecting" (hopefully not "hoarding"!) habit. Furthermore, the discipline of keeping the gear and vinyl clean and getting the albums organized intensifies a collector's obsessive-compulsive tendencies. This indeed all translates to a different experience which again can be pleasurable and memorable irrespective of the sonic quality.

You might be wondering... What about the sound? Well, it's pretty good. Obviously this isn't high-end vinyl gear by any means, and I don't have many audiophile grade LPs on hand, but the sound is definitely enjoyable. Over the years, I have heard some excellent vinyl setups and can attest to fantastic imaging and clarity. However, as alluded to above, for me, vinyl isn't about audio quality being "accurate" or "high-resolution"; there are just too many variables and little objective frame of reference to accurately verify what is "high-fidelity" from a vinyl setup.

Despite the audiophile buzz, turntable & vinyl ownership is still very rare among my friends (late 30's to early 40's). I think many of us also recognize the "coolness" factor associated with being retro. This is heightened further by the positive sentiment perpetuated by folks like Mr. Fremer that somehow LP's in general sound "better" than digital (like this video where he also talks about CDs being "analog" at 43:30). Seriously, if it's only sound quality I'm after, I still think a well produced non-dynamically-compressed digital copy is superior.

In any event, there is fun to be had and that's good.

Now that I have the sound room and space, nothing wrong with putting together a little vinyl collection of cherished recordings. Besides, the stack of LPs could help with room acoustics... :-)

I was chatting with a friend the other day about maybe doing some "controlled" vinyl rips using my basic gear versus his high-end multi-kilobucks setup to demonstrate what $$$ buy in terms of sonic output. That could be fun and maybe another blind test to try out. I'll keep you guys posted :-). Let's get through the 24-bit vs. 16-bit survey first...

There just happens to be a couple of good used LP stores within 10 minutes of home, so I might check them out between driving the kids to events this weekend. Until next time, enjoy the tunes everyone...

Addendum (June 1, 2014):
I ended up returning that Kind Of Blue (50th Anniversary) Box I showed above. I noticed that Side B had quite a number of light surface abrasions and 2 strange "bumps" about 1cm in diameter. I've not seen these bumps with the black LPs I have... Disappointing since it's quite a nice package and essay book... Maybe I'll just grab the standard black vinyl release later.

Email ThisBlogThis!Share to TwitterShare to FacebookShare to Pinterest
Labels: Vinyl