As suggested by one of the comments in Part II, I have put together a summary of the respondents who got the 3 sample audio tracks correct (answered B-A-A). Let us see if there are any demographic variables that stand out. Remember, out of 140 respondents, 20 were able to identify all 3 24-bit samples. This is of course not significant (p 0.30) - by chance alone, one would expect approximately 1/8 to be correct (17.5 out of 140).

Here are the graphs direct from the survey site. Feel free to compare / contrast with those in Part II in the "Demographics" section.

95% males with 1 woman in the group. Not unexpected. 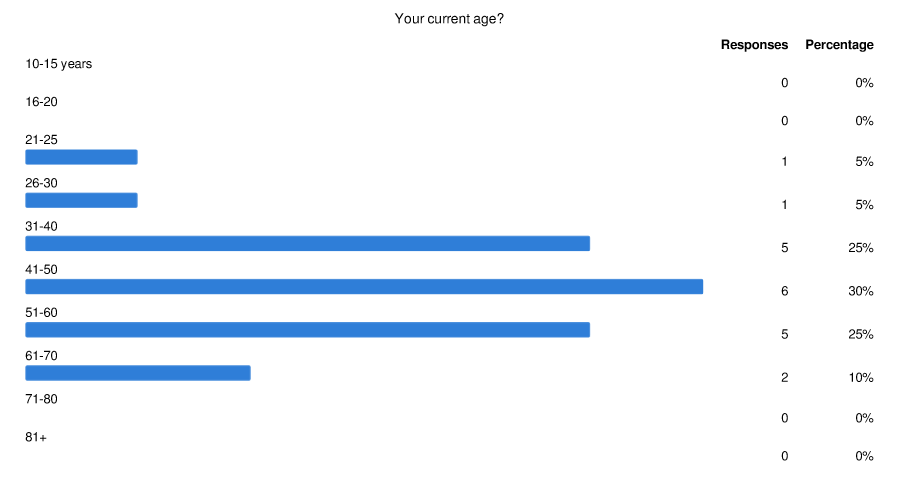 Average age calculated from the median age in each category: 45 years. Essentially the same as the 44 years old average for all 140 respondents.

30% does audio "engineering" as compared to 24.3% for all respondents.

None of these who got all the choices correct identified themselves as an audio hardware reviewer. Since this was an optional item, 1 individual did not answer the question. 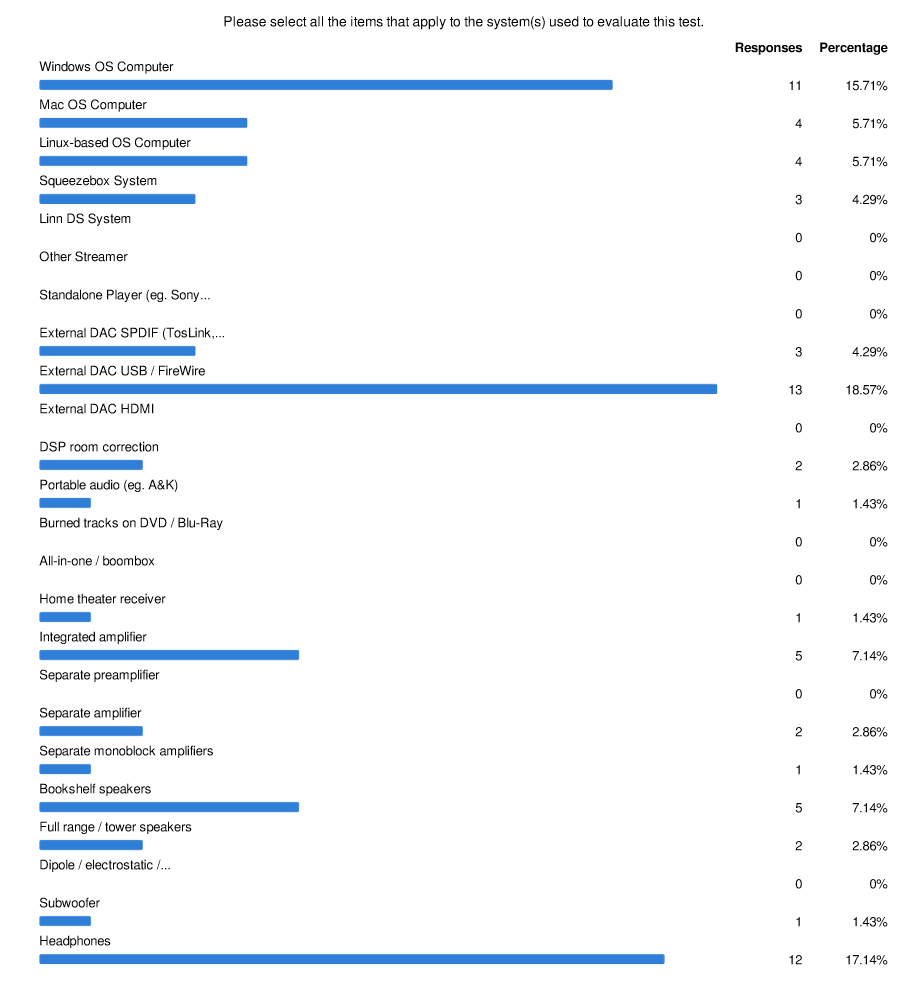 11/19 (58%) were Windows users (almost exactly the same as the full group at 60%). Again, we see external USB/Firewire DAC being used mainly (13/20 - 65%). The only thing that seemed quite different was a higher proportion of headphone users here at 12/19 (63%) versus about 50% in the total group. Note that there was 1 individual who got all 3 24-bit selections correct who did not go into detail with his reporting, hence the total of 19 since he did not click either the speaker options or headphone option. 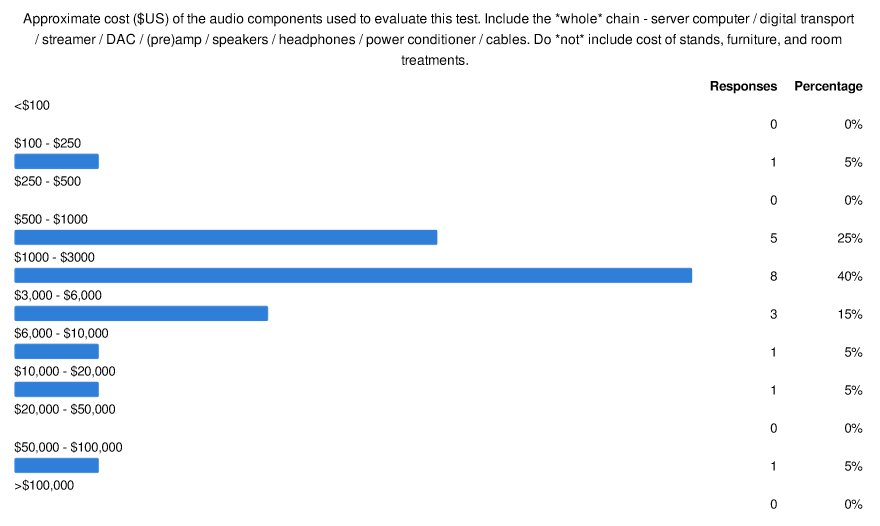 Average cost of the systems (based on median price in each price category) used by those who got all 24-bit samples correct: ~$6600. This is lower than the $8160 for all respondents. It's a smaller sample so I wouldn't put too much into this... No evidence in any case that these folks on average had more expensive systems. Like in the main group, the $1000-3000 segment was most common.

The person who used the "$100-$250" system was running what looked like a basic Windows PC with some Sennheiser HD433 (~$25) plugged in. (Remember, I dissuaded folks from listening directly off the computer since often the on-board DACs are poor - worked out well in this case!)

So... How "confident" were they of the answers picked? 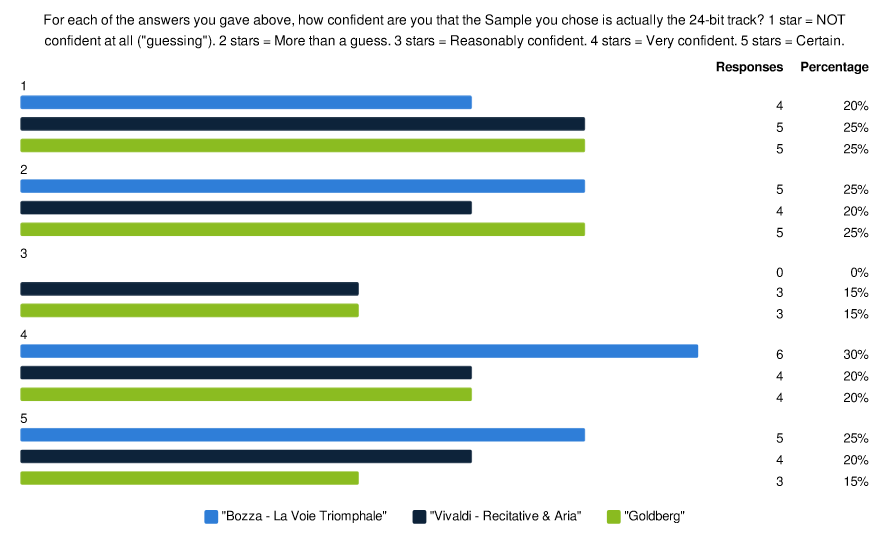 45-50% graded their confidence low - either "guessing" or "2 stars = More than a guess" for each track. Again, overall about the same as the total group. There seemed to be a bit more confidence in the Bozza track however (looked like everyone selected "4" rather than spread out between "3" and "4") and the confidence level dropped off by the time Goldberg was evaluated similar to the previous report. With such small numbers, it's difficult to put strong weight into specific results such as these.

In summary, this demographic doesn't look very different from the general group of all respondents - perhaps proportionally more headphone listeners. Remember however that I was not able to find a significant improvement in general accuracy of identifying 24-bit audio comparing all the headphone-using respondents in the overall group.

Of interest also was the fact that the average cost of the hardware used by these respondents was no higher than that calculated for the total group.

Although this subgroup was accurate in their choice of which sample was the 24-bit audio, confidence overall remained relatively low with 20-25% admitted to being "guesses".