This week, I thought I'd put up an update on the analogue/vinyl changes I've made in the last few months since the "Vinyl Time" post back in May.

The Sony PS-T15 was pretty good. It sounds reasonably quiet but certainly not of "heavy build" quality weighing in at 5kg and things like the fluidity of the tone arm and resistance to vibration left a bit to be desired. I started buying a few more LPs and eventually decided it was time for a little upgrade to something a bit more substantial...

Looking around Craigslist, I was able to snatch up a lightly used Technics SL-1200 M3D turntable for a pretty good deal (<$400CAD). Based on the serial number, it looks to be made in 2002. The metal body and tonearm were immaculate but there were a couple small defects; a small imperfection at the base of the platter which doesn't affect the actual record surface or motion and a pop-up light which burned out. The platter looks really good with no scratches or anything other than that small imperfection (looks like a 0.25cm dent at the lower edge) so there was no reason to change it. I replaced the pop-up incandescent light with an LED (a shame that Technics didn't make it easier to replace the original incandescent bulb since it seems to burn out quite commonly). It came with a Stanton 890SA MM cartridge which supposedly could sound good with a new stylus/cantilever (maybe I'll check this out in time).

As you probably are aware, the Technics SL-1200 line consists of a series of turntables originating back in 1972. They were in production all the way to 2010 when discontinued. The motor is a high-torque magnetic direct drive and quartz-locked by 1979 with the introduction of the SL-1200 MK2. It starts and stops in <1 second. The specs look good with rumble at -78dB (DIN-B, check out the gory details) and 0.025% (JIS) wow and flutter... These numbers easily give many much more expensive "audiophile" turntables a run for their money (interesting opinion). Some have said the tonearm is the weakest link in the Technics line and replacements can be found (many aftermarket mod like this from KAB or this article with SME tonearm attached). I haven't played with many tonearms but it's certainly nice to have easy VTA adjustment with this stock design. Like almost everything else in this world, opinions vary and there are the detractors as well like this guy who seems to have a problem with direct drive tables in general, and Michael Fremer's assertions.

Finally, at 12.5kg, this unit is on the heavier side of things (not ridiculously heavy of course). It's built like the proverbial tank and I suspect will easily last me a lifetime assuming the electronics don't break down or some physical mishap. Build quality is fantastic with a metal base and rubberized undersurface for vibration reduction. Legs are functional and height-adjustable for leveling.

Here's a look at the innards exposed when I replaced the pop-up light: 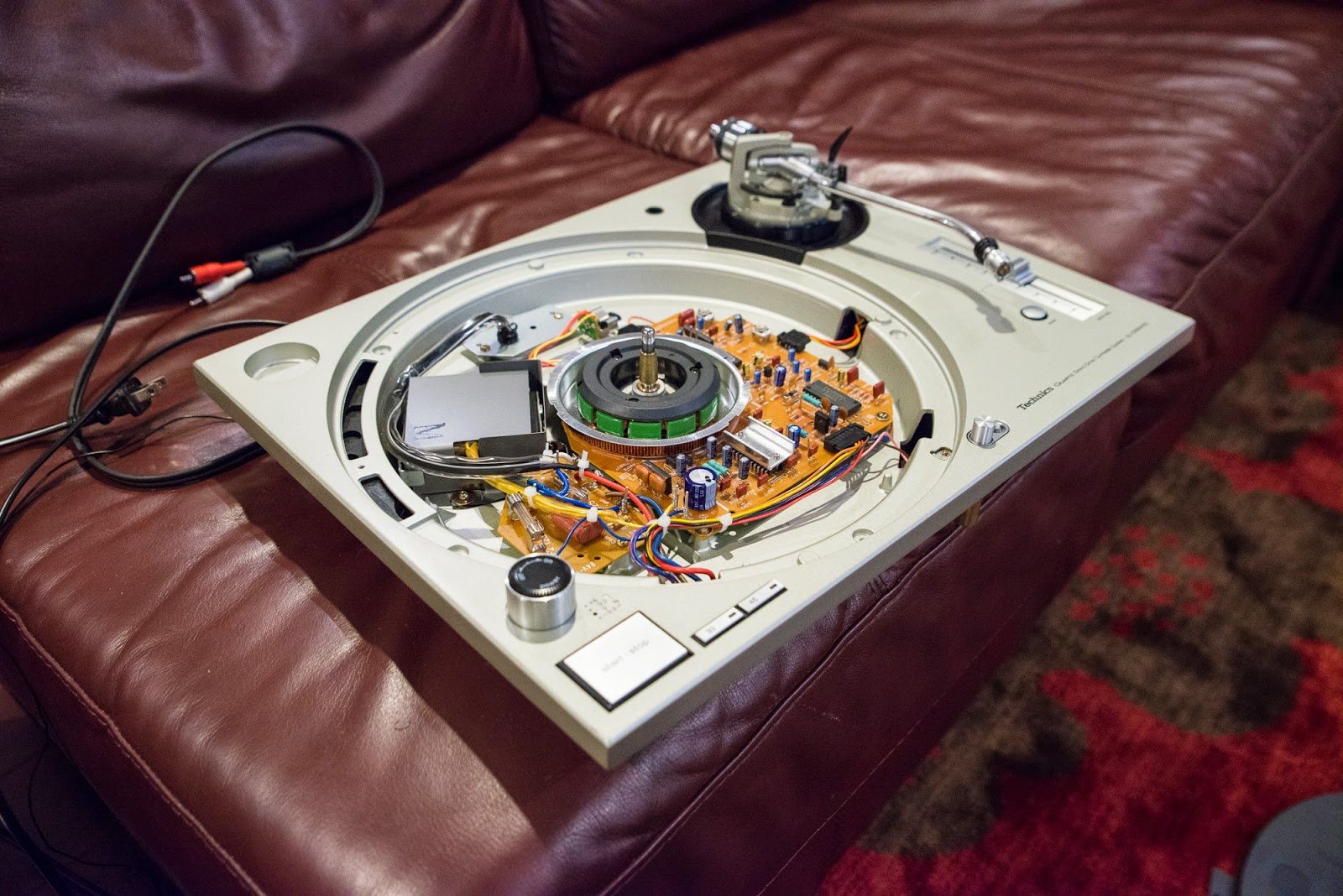 Since the M3D model was meant for DJ use, it doesn't have a hinged cover and instead the lid is just the standard SL-1200 lid loosely placed on top... I got a DeckSaver lid instead which fits quite snug and overall I think it looks pretty good while keeping the dust away (I heard they're discontinuing this product): 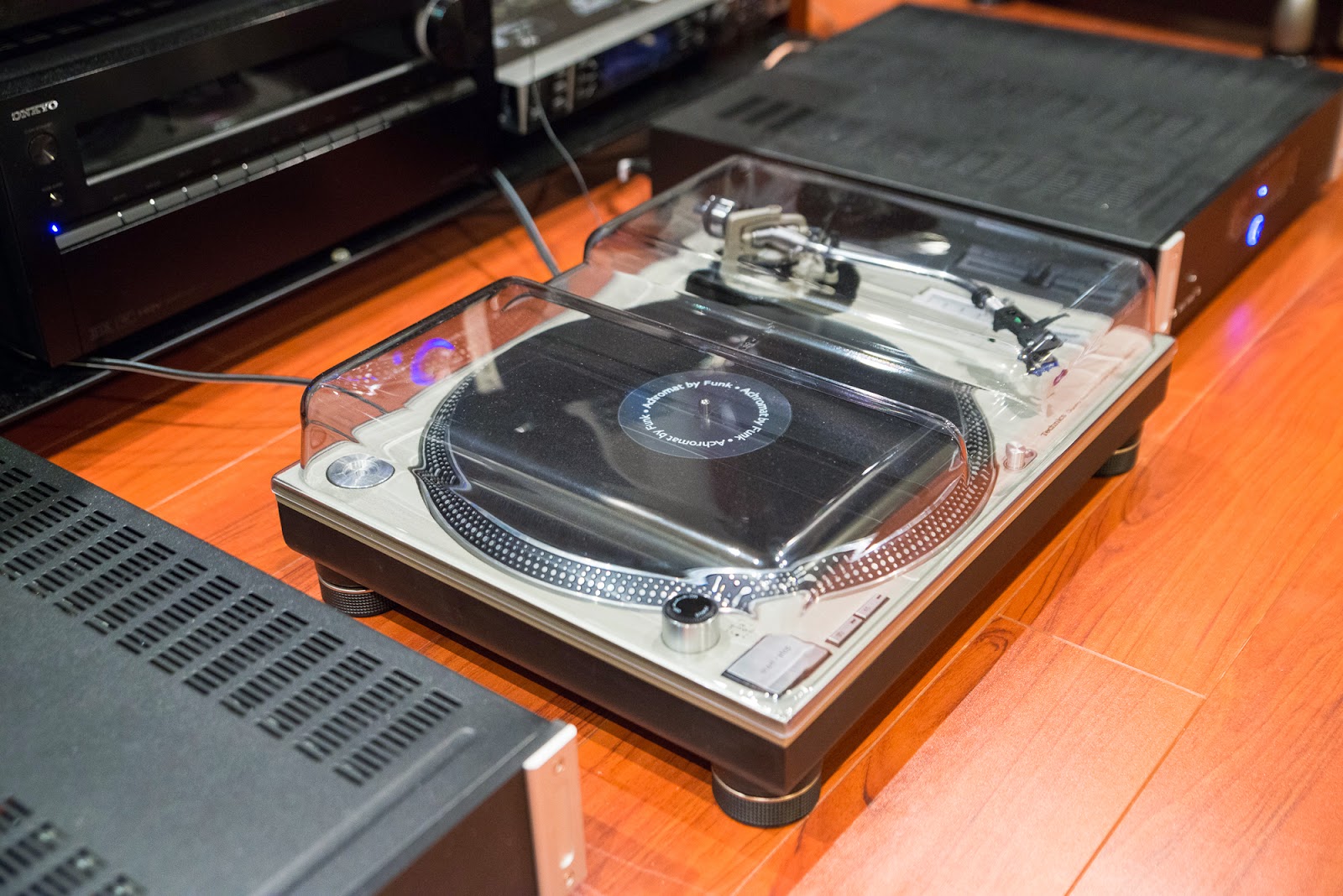 One final "upgrade" is the Funk Achromat 1200 replacement mat instead of the standard rubber Technics mat. Some Vaseline/petroleum jelly underneath to "bond" with the platter supposedly helps. Here she is juiced up and ready to spin: 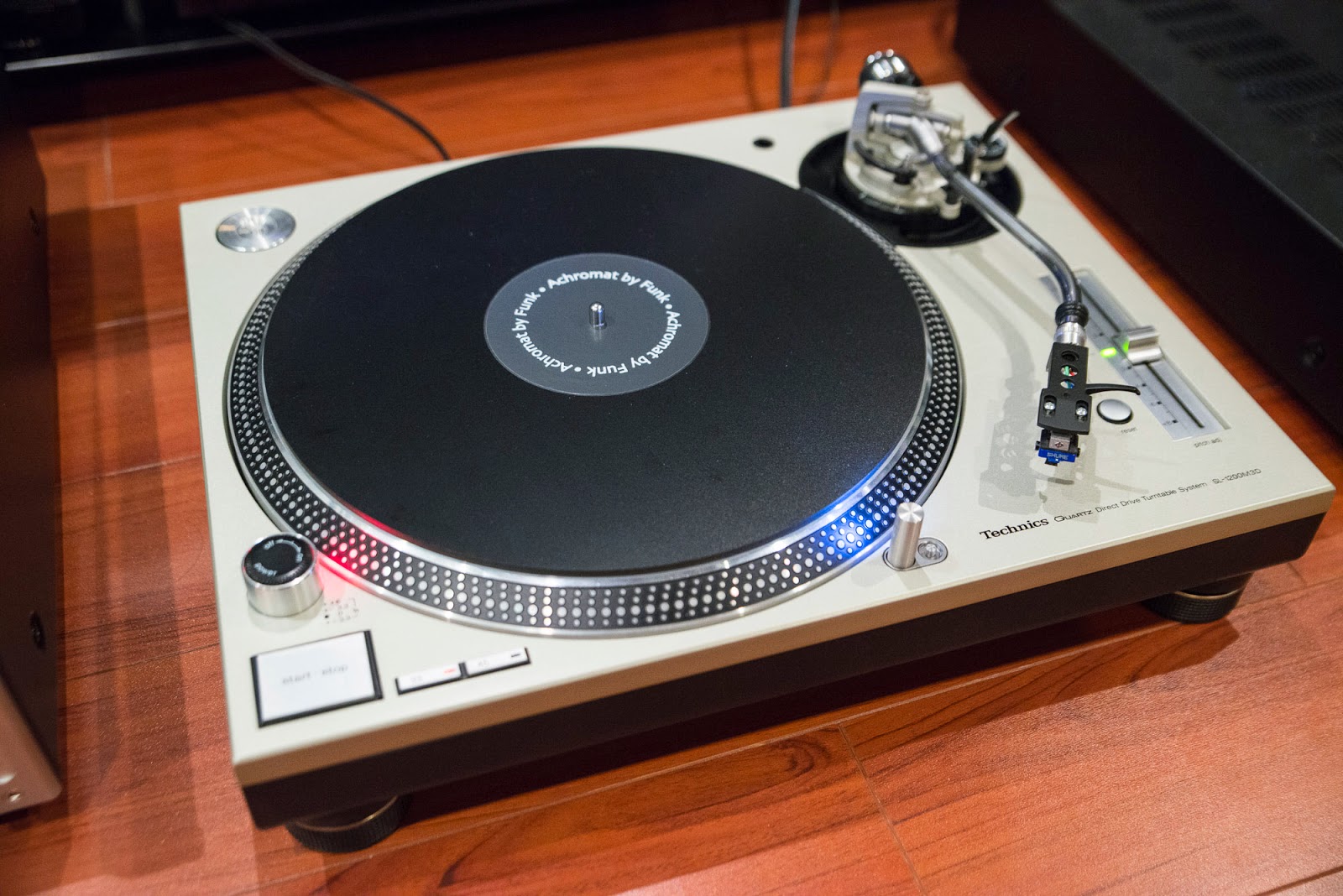 I've got a Shure M97xE cartridge in place now on this 'table and have a Denon DL-110 on order... Looking forward to hearing the difference the cartridges make. 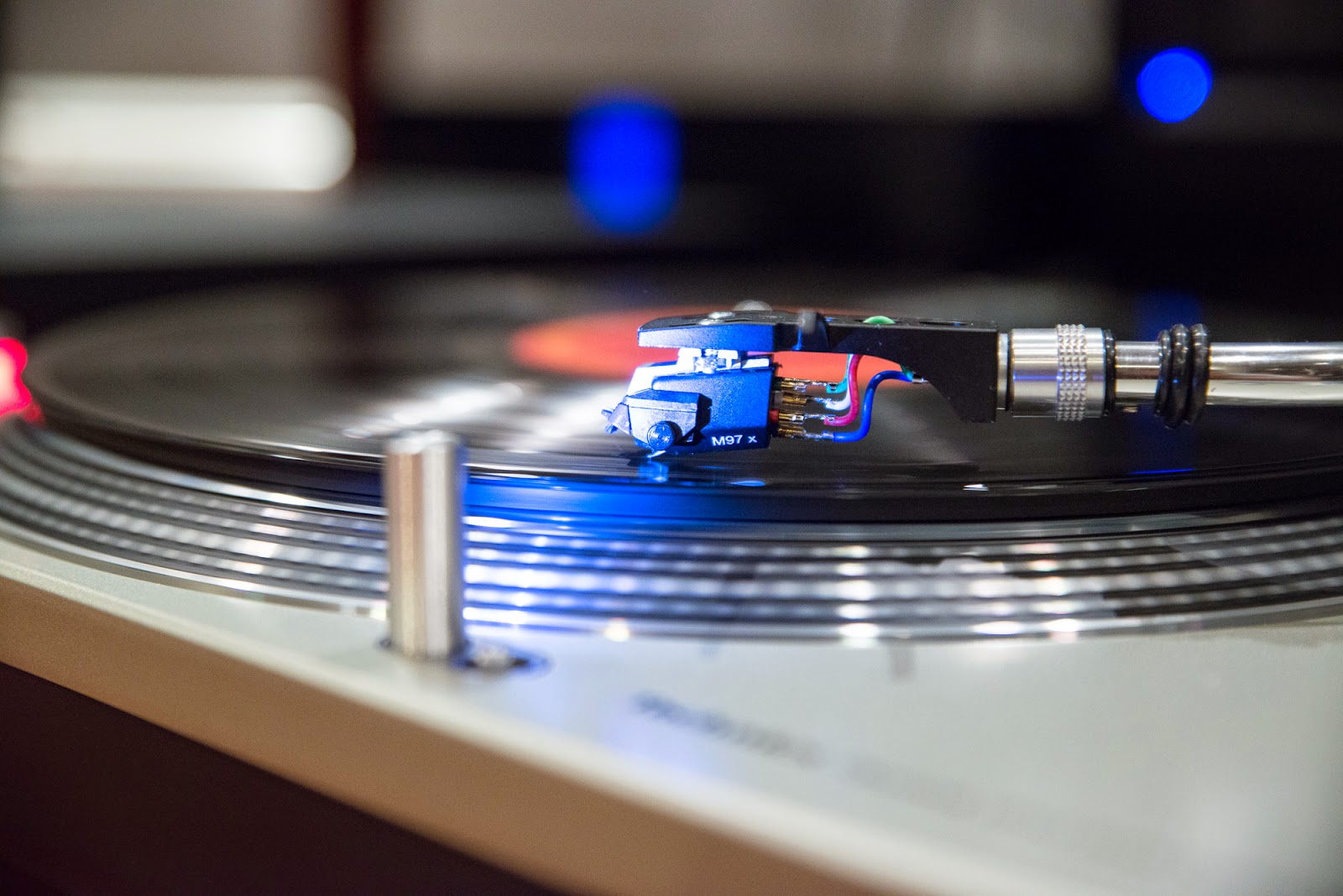 A look now at the front end with a some of the albums collected (about 1/2 of recent purchases) over the last few months: 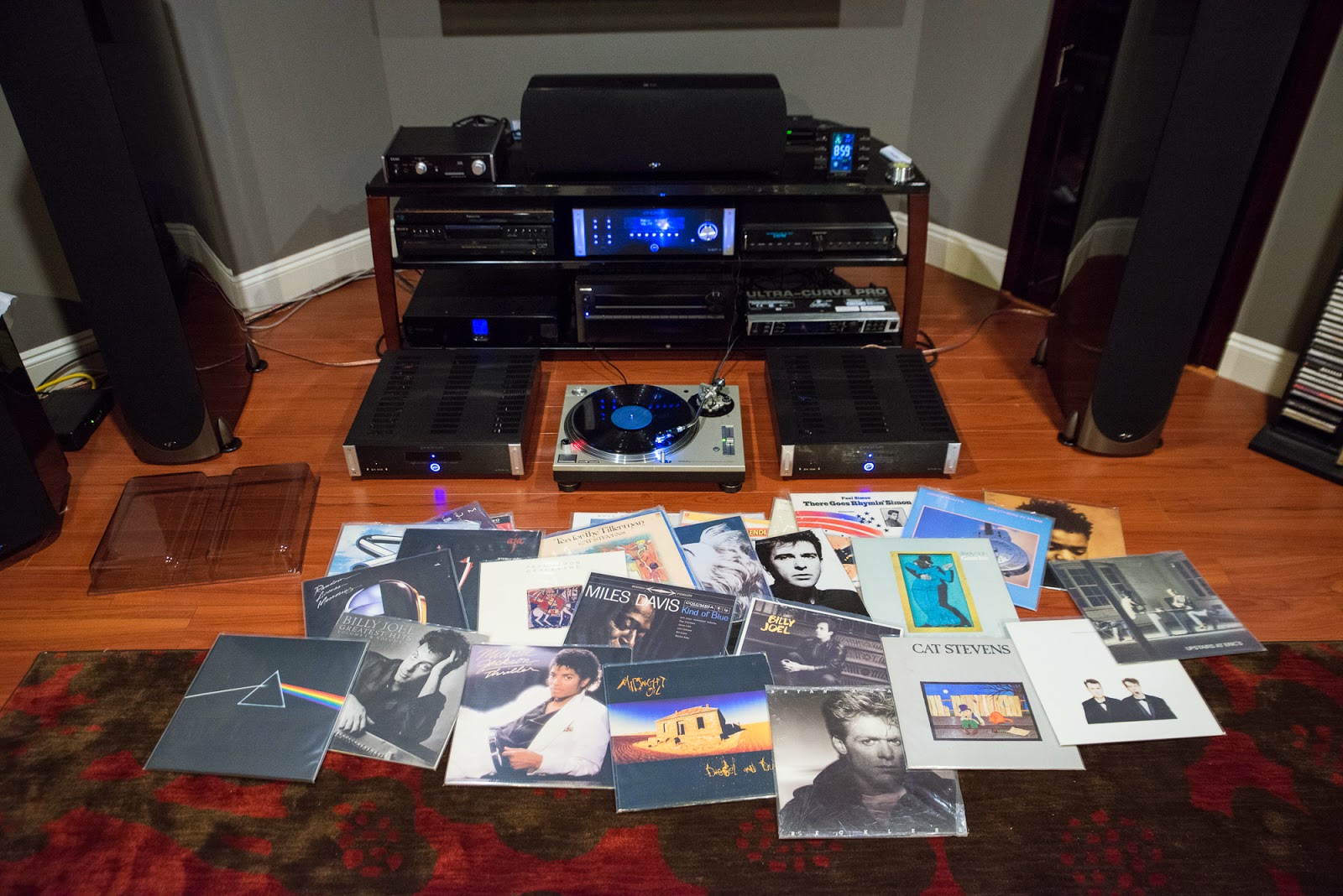 As you can see, other than the Daft Punk Random Access Memories on the left edge, the rest of the albums are old-skool or "audiophile approved" 70's (Steely Dans, Dark Side...). I grew up in the 80's and other than some albums my dad had, I never bothered to collect any of the vinyl from back in the day myself... Until now :-). Already, a few of the albums by then were sourced from digital. I have Dire Straits' Brothers In Arms (isn't it amazing how many remasters there are of an album that was essentially 16/44? DVD-A, SACD, 20th Anniversary, recently 2013 MFSL!), and Madonna's True Blue which is speculated to have been an analogue recording but digitally mixed (ADD SPARS code?). Madonna is just to the left of Peter Gabriel's So which itself was produced with digital gear and effects. And so it goes...

Knowing myself (I think!), I doubt I'll ever be a rabid vinyl fanboy... As a result, I don't think I'll end up being any kind of "completist" collector. Certainly right now, I don't have much interest in the new digitally remastered LPs although I have a few already and they do sound great (Dark Side, Graceland, Kind Of Blue).

So... How does it sound overall? Really good.

Noticeably more authoritative bass and lower noise floor than the Sony PS-T15 previously (using the same Shure M97xE cartridge). Albums like Steely Dan's Aja sounded punchy and clear as it should. Good quality new albums like Miles Davis' Kind Of Blue (Columbia 180g remaster release) sounded sweet, palpable with a nice soundstage. On good vinyl, the surface noise was almost imperceptable (unless the volume was turned up excessively of course). Remember thought that I have a very quiet basement sound room so almost any imperfection is quite easy to hear - I had to change my HTPC power supply to a fanless design because I could hear it in that room despite it being a "quiet" design. The aforementioned Kind Of Blue of course has quite high tape noise which was easily audible above the turntable / cartridge noise floor. Michael Jackson's Thriller sounded realistic with the creaking doors, zombie noises, and of course Vincent Price's inimitable sinister dialogue and laugh.

It's difficult to do a proper comparison, and I found it hard to notice a difference between the Achromat vs. rubber stock Technics mat. The Achromat does look nice on the platter nonetheless.

In the next few months I'll take some time to evaluate how some of my albums sound in both CD and vinyl formats and see if I have a preference overall. It's quite clear that the sound is different and how one decides which version is preferred has more to do with factors other than just resolution which in theory (and in my experience so far), digital will win without question. There's no doubt that vinyl has more distortion. Physical factors like slight vinyl warping and cartridge alignment geometry affect the sound, not to mention the fact that the inner grooves cannot maintain the same quality as the outer grooves (ie. inner groove distortion - a 24-minute monologue). I'm sure everyone also has at some time heard the pops (thankfully not common, usually associated with damaged used LPs), lower level crackles (a bit more common unfortunately, likely due to poorer quality vinyl material or damage from previous owner's gear), and low level surface noise (there's always some mechanical friction, essentially universal if you pushed up the volume during playback). Depending on the music, I can generally handle the excess noise; for example, pop and rock recordings will mask out much of the softer distortions but if I'm listening to classical, I find even the low amplitude noise will mar my listening enjoyment. It's no wonder that the classical community generally embraces digital. Of course resolution isn't the only determinant to whether a recording sounds good, so even though reason and science tells us that for the same original signal, a good digital system can offer better fidelity, we're generally not presented with that same original signal being stamped on to the vinyl. Remember, to compensate for the limitations of the LP medium, the mixing and mastering has to be different. And I wonder if often compensating for these limitations could result in an overall more pleasing sonic product. I can certainly appreciate what vinyl aficionados have said for awhile; when the stars align with good vinyl, it does sound heavenly... The problem is that they don't always align :-(.

As I'm putting the finishing touches to this post, look what showed up: 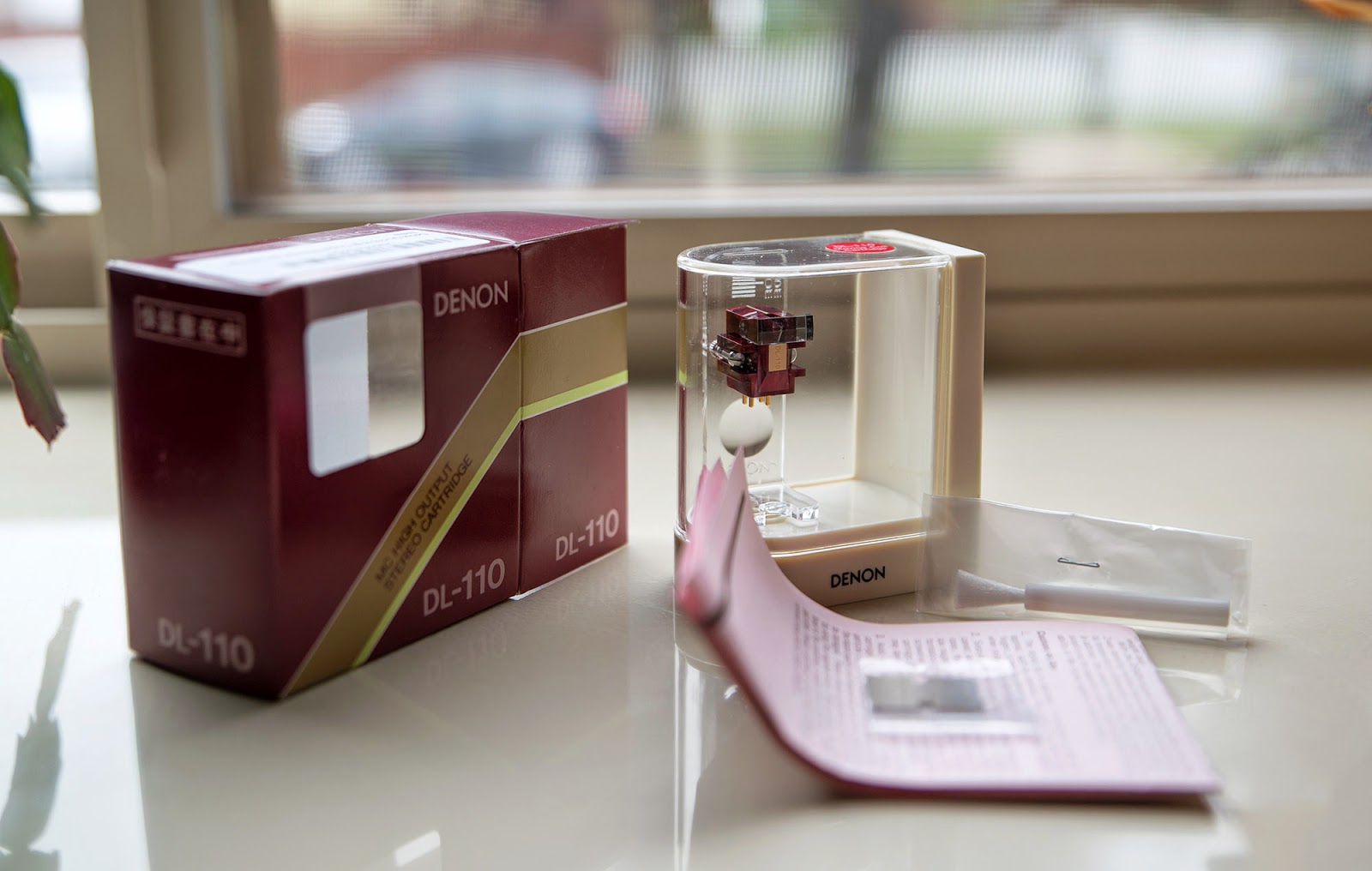 The Denon DL-110 high-output moving coil cartridge ("HOMC"). Nice package with an overhang gauge, built-in "magnifying glass" (round part under the cartridge), stylus brush (in white plastic packet), and a metal weight balance plate (cartridge weight is only 4.8g). With a 1.6mV output, it should have no problem mated to any phono preamp (no need to add step-up moving-coil amplification). Frequency response should be flatter across the audible spectrum (especially the highs) and let's see if the sonic resolution picks up significantly with this baby compared to the Shure :-)...

I'll be away a bit through the summer. Enjoy the (hopefully good) summer weather for all in the Northern Hemisphere! Happy listening...

BTW: A few months ago I mentioned I ordered the Light Harmonic Geek Out 720mW DAC. Well, I waited for >2 months on the pre-order line and decided to cancel... It would have been fun to run it through some of my own measurements. Since I don't really have very low efficiency headphones needing the power, there just wasn't a need and likely the DAC would be sitting unused. I rolled the $$$ into the toys above instead - which will definitely get more use!