So, I got the Dr. Feickert's Adjust+ 7" Test LP in the mail the other day direct from Germany. It looks well pressed on good quality vinyl.

It's great to see the measurement screenshots from Michael Fremer for the various turntables reviewed so I thought it would be interesting to do my own measurements with the Technics SL-1200 (M3D) here at home. I believe that all the Technics SL-1200 quartz-controlled direct drive units (MK2 onwards) have the same servo mechanisms so they should measure similarly. 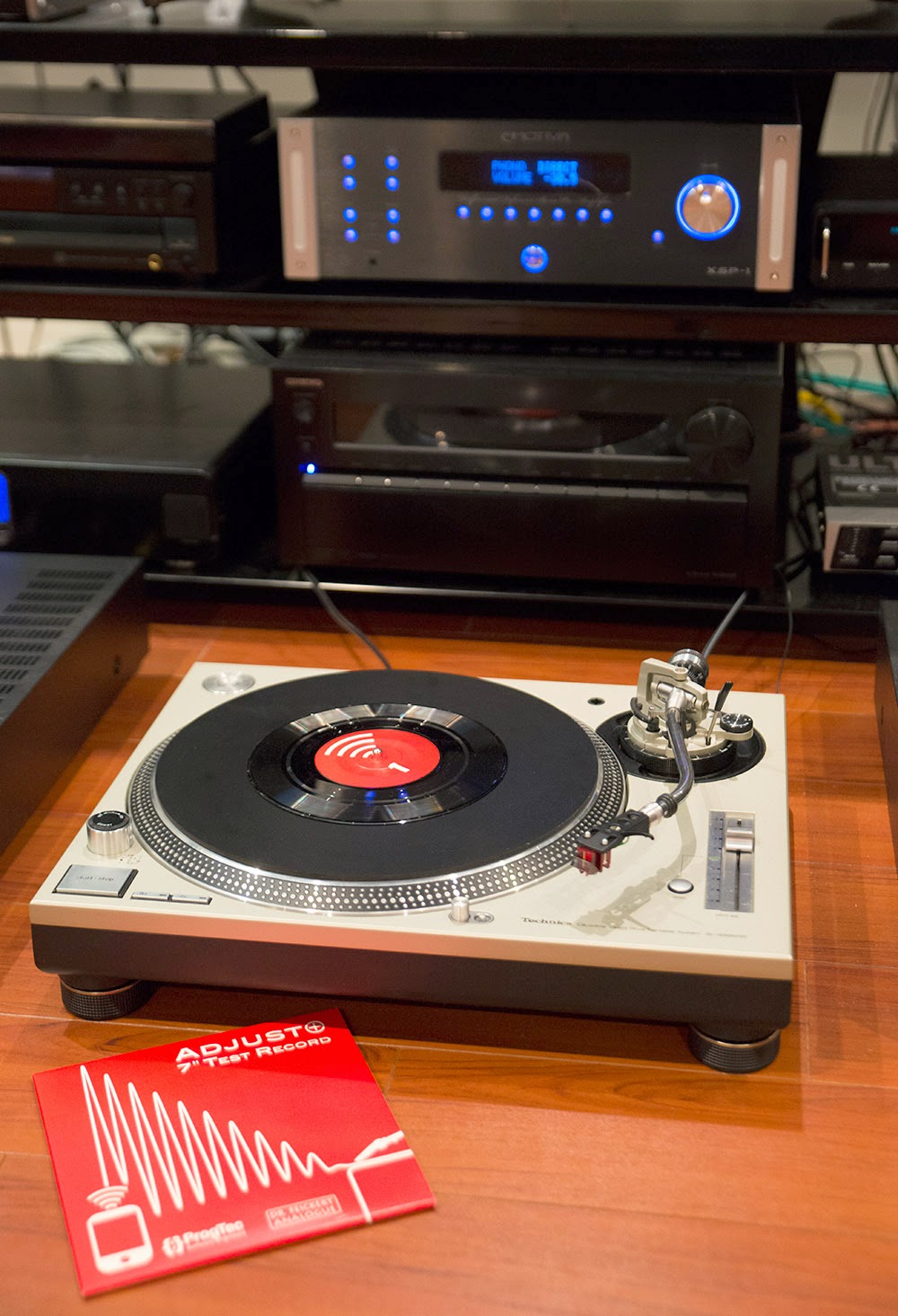 I'm using the current PlatterSpeed iPad app (v.2.2) to do the measurements in concert with the Test LP.

Recorded over 60 seconds, here's how the wow & flutter graph looks for my Technics with the stock rubber mat in place and stock tonearm at 33.3 rpm. The turntable sits on my sturdy basement hardwood floor as in the picture above. The M3D's "reset" button was activated to quartz-lock at the standard pitch. Cartridge is the Denon DL-110 with the Emotiva XSP-1 preamp: 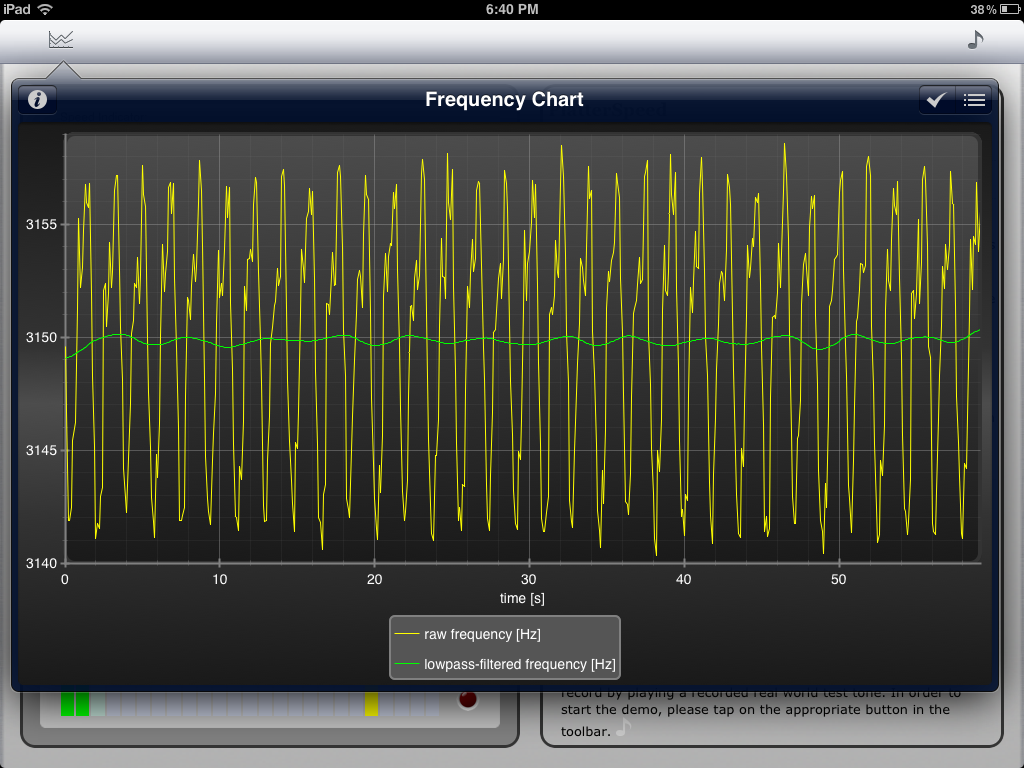 I also did the measurement with the Funk Achromat 1200 and did not see any difference (not unexpected of course since the mat itself should not be causing any platter rotational change unless there is slippage of the LP or mat over the platter).

As you can see from the lowpass-filtered green line, the overall speed is very accurate, hovering right around the 3150Hz test tone. Notice too that this doesn't look like the more chaotic "raw" graph from something like the less expensive "clone" Audio Technica AT-LP120-USB recently reviewed. You can also compare this with the Music Hall MMF-11.1 graph, and the Zorin Audio TP-S3 - way more expensive tables. And here's a supposedly "modestly" priced AVID Ingenium review with rather significant speed stability issues. (When look at these graphs, remember to mind the scale differences on the left, not just the shape of the raw tracings.)

If you have a subscription to Stereophile, the Analog Corner article in the May 2014 issue (p. 33) also has some numbers and graphs for the VPI Classic Direct Drive Signature, Continuum Caliburn, and the very smooth looking graph from the Onedof One Degree of Freedom (the review is also posted on-line.) 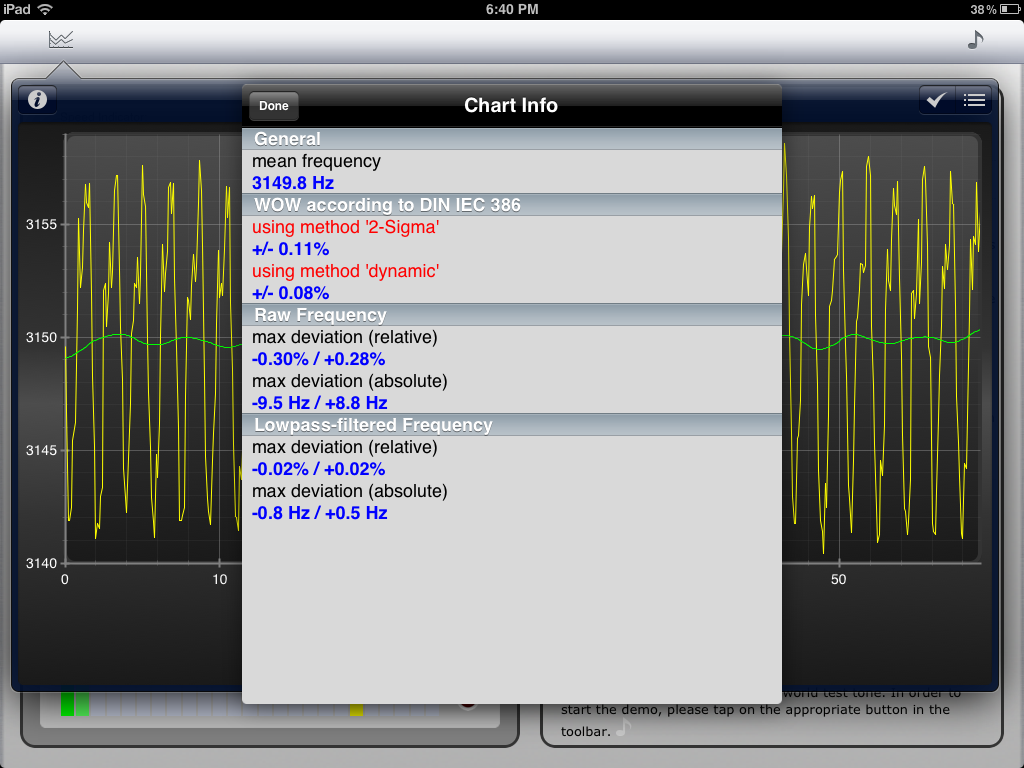 Lowpass-filtered, we see a nice +/-0.02% deviation. Over the course of ~60 seconds, it's good to see that the maximum deviation remained <+/-10Hz for the 3150Hz signal - good stability (Fremer's measurements are usually for ~30 seconds).

I try not to be a zealot over hardware - it's just a "thing" after all and can be replaced, but I do value objective "truth" as best I can show evidence of and am curious if I actually do experience something unexpected subjectively... So please don't take my comments as being some kind of "religious" cult-lover of the Technics SL-1200; I got it at a great price used, it has excellent build quality, and so far it sounds fantastic to me. That being said, here's something that Michael Fremer wrote in the May 2011 Stereophile in his Brinkmann Audio Bardo turntable review:


Virtually all electric motors "cog," ie, their rotational speed regularly fluctuates above and below the average speed as each magnet pole goes past each coil. A high-torque motor needs a greater number of poles—in some designs, dozens—and the more poles, the more cogging. With nothing to counteract the motor cogging that inevitably occurs directly within the platter of a high-torque, low-mass, direct-drive turntable, large amounts of wow and flutter are also inevitable.

Regulating a direct-drive motor's speed with a phase-locked loop produces tight speed control and measurably low levels of wow and flutter, but the motor's constant, ultra-high-speed hunting and pecking as it over- and undercompensates in the attempt to produce a consistent speed can create a jitter effect in the mid-treble to which the human ear is particularly sensitive, adding a hard, brittle texture to music. That describes the sound of Technics' now-discontinued SL-1200 series of direct-drive turntables, and explains why, despite their high build quality and relatively low price, few are used in serious audio systems, though some listeners claim that these 'tables can be modified to improve their sonic performance.

Well, that sounds a bit scary doesn't it? But unless substantiated with some objective evidence, it remains just another scary theory among many promulgated by the "high end" (eg. the dreaded jitter, WAV vs. lossless compressed FLAC sounding different, digital cables, power cables, strange "room treatments", funky playback software, just to name a few). Surely something so ominous can be measured, right? Others have also voiced doubts about these claims; for example KAB doesn't seem to think this happens with the SL-1200.

So, I'm looking at the graph above and am wondering whether I'm seeing evidence of "ultra high-speed hunting and pecking". The frequency variation looks quite regular and clean. I assume we should be looking for significant random chaotic ups and downs in the graph that could be (supposedly) perceived as the "jitter" artefact. Sure, the Technics is not as good as the symmetrical, smooth and constrained undulation of the Onedof turntable (ahem, $150,000 folks). For less than $600 or so that I paid including the LED cue light replacement and aftermarket Funk Achromat, this 1970's Japanese designed performance seems pretty decent I think!

On a side note, if anyone dares to complain about jitter as a significant variable in digital playback, just look at how much 'jitter' is present with timing errors from vinyl! We're talking orders of magnitude compared to the usual picoseconds from typical decent CD players.

Ultimately, rotational speed accuracy and stability are just a couple of the variables in the complex vinyl playback chain; but important ones. Remember that the test LP itself will add its own variation and affect the results (eg. if the spindle hole is slightly off center, mild warping, etc. - the lowpass-filtering is supposed to compensate for this). I wouldn't therefore read too much into these measurements other than a guide to know when something is really abnormal. I agree with Fremer when he wrote in the VPI Classic Direct Drive Signature review:


The Onedof and Caliburn measure similarly, but their frequency graphs look very different. Are the sonic differences the result of differences in bearing smoothness, motor control, or both? At this point, I don't know.

As for the supposedly audible complaints of "hard, brittle texture" in the earlier quote above charged at the SL-1200, I have no idea what he's talking about... Just because something uses quartz doesn't mean it's "hard and brittle" :-); just like silver cables = "fast" and "bright", right?

There have been debates about direct drive vs. belt drive vs. rim drive turntables over the decades but as far as I am aware, good controlled listening tests/comparisons are lacking so I think it's more important to focus on the actual execution of the turntable rather than lumping drive mechanisms in a simplistic fashion. I'm sure there are some terrible direct drive models just as there are terrible belt drive models.

For completeness, here are the Feickert PlatterSpeed test results at 45 rpm on my SL-1200 M3D over about 45 seconds (test signal target is 4252.5Hz): 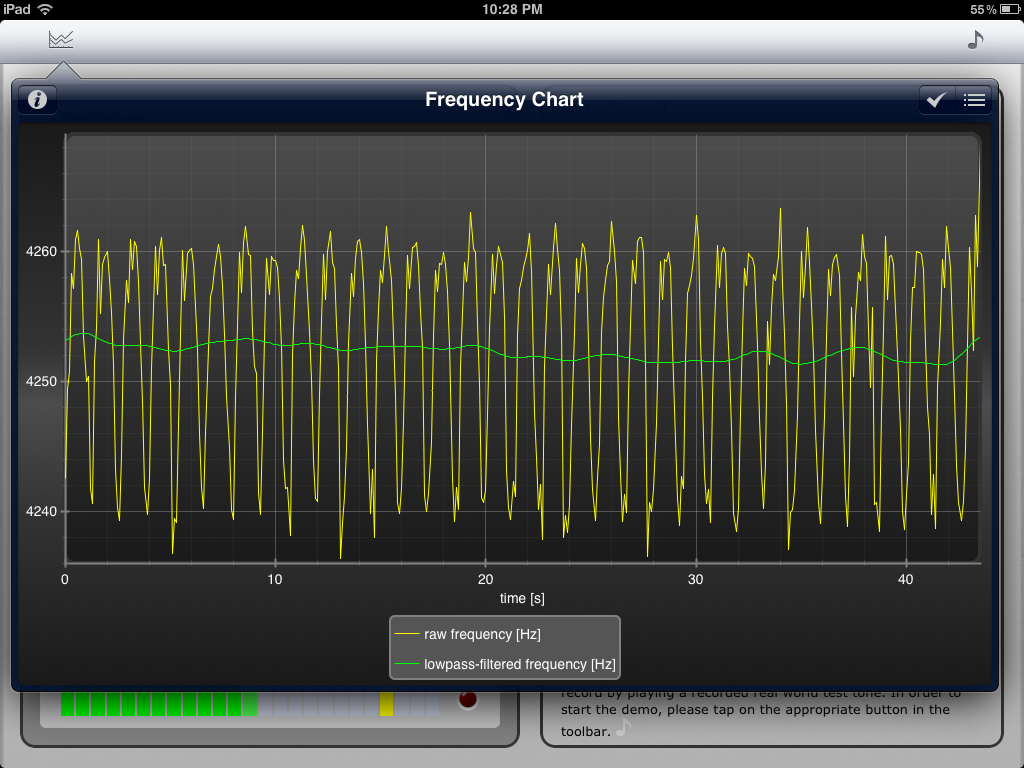 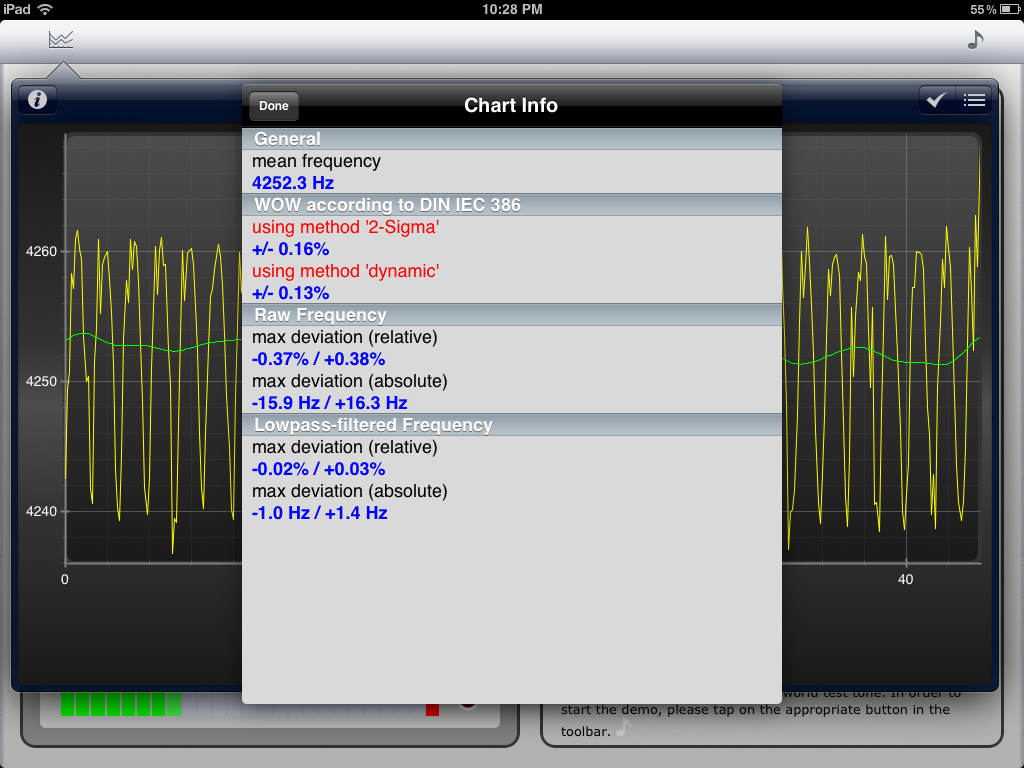 As expected given what was seen at 33.3rpm. A bit more frequency deviation/fluctuation with the 35% higher rotation speed. Note that the +16.3Hz raw max frequency deviation is an anomaly due to that little spike at the end when I took the stylus off the record... Should only be +11Hz at most. Very good result I think!

Overall, I suspect the results here would be superior to many very expensive "boutique" turntables out there. I'll show some other measurements in the days ahead when I come across the opportunity.

Off to try out some zip-lining and white water rafting at Whistler this Labour Day long weekend. Enjoy the tunes everyone...

-----------------------------------
Addendum: Here's another interesting thread and the original thread where the test was done on the idea of "cogging" with direct drive motors from a few years back. Clear as mud. Again, even if these results demonstrate imperfections in the drive mechanism, where's the evidence for perceptibility?