Remember that much-maligned phrase "Perfect Sound Forever"? Of course you do! For the audiophiles out there who read the usual magazines, how can we not!? We only seem to be reminded of it every few months as it's trotted out like a nagging parent bringing out old transgressions - never forgiven, never forgotten.

The name of the person(s) who came up with that catch phrase has been lost in time; perhaps someone in the advertising back office at Philips... In full, it's actually "Pure, Perfect Sound - Forever" as prominently displayed in one of the earliest CDs from Philips (circa 1982): 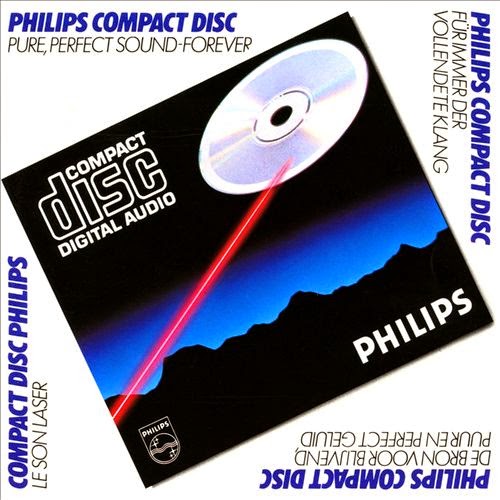 This demo disk consisted of 14 tracks; combination of rock/pop (Elton John "Blue Eyes", Dire Straits "Once Upon A Time In The West"), with classical selections [see here]. Personally I have never seen a copy but can imagine that it would sound like the usual early pressings - a first pressing Billy Joel Piano Man perhaps (which incidentally needed de-emphasis processing to sound right [see list]).

As a marketing slogan, it has obviously worked. After decades, at least within the audio world, apparently people remember the "promise" of digital audio. I would of course agree that these early 1980s "first press" CDs were not the "ultimate" best sounding audio, but as I opined previously here (in reference to Pono and John Hamm's comments), just what is the best version of any album is a subjective judgement irrespective of whatever carrier medium... There have been many instances where I would easily prefer these old releases compared to modern dynamic compressed, distorted remasters (the inferior 2009 UMG Rolling Stones remaster of albums like Emotional Rescue from 1980 came to mind the other day as I was listening to it). The issue with the interpretation of this marketing phrase with many in the audiophile press and analogue evangelists when they malign "perfect sound forever" is that they're taking it to mean "best sounding version forever". Furthermore, some folks take this advertising slogan and heap upon it their own unfounded biases against digital as if the phrase somehow is evidence of an inherent "flaw" with digital audio! Remember, it has been 30 years since the introduction of the CD technology and we have yet to see credible evidence to demonstrate that well-digitized 16/44 isn't transparent beyond anecdotal opinions (just like there's no good evidence to demonstrate superiority of 24-bits or >44kHz sampling rates; assuming we're using a decent DAC playback system).

In the context of what I wrote previously with my adventures in analogue/vinyl, I believe that "pure, perfect sound - forever" as it relates to digital is more accurate than not. Let's look at the mains points.

Pure: I take it this refers to purity of the signal recorded free from extraneous distortion and noise. I don't think I need to say much about this since the digital format is indeed capable of encoding mathematically precise, "pure", even synthetic waves. Sine, square, triangle, sawtooth; whatever... It will be encoded on the CD within the resolution limits of digitization - precisely. Of course the analogue-to-digital converter plays a massive part in digitization quality but they're extremely capable these days. Noise and distortion technical limits of 16/44 are well understood of course. Vinyl in comparison as a physical object will have limitations in terms of noise and other distortion long before the mathematical precision of digital 16/44 data... This leads us to the second point...

Perfect: In reference to a digital sound storage system (ie. the CD and modern day digital files), one can say that perfect retention of the data and replication of the sound as encoded in the data is possible (or at least perfect enough for all practical purposes). It does get a bit boring measuring DACs these days because typical high quality DACs measure and sound very similar (atypical ones that employ vacuum tubes output stages or complex internal DSP operations for example, are a different matter!). I suspect it is this fact that leads various companies to shift attention to tiny differences like "jitter" to differentiate themselves or claim audible differences. In comparison, you can never say that any aspect of a vinyl system's music reproduction is "perfect". The mixing process for an LP requires compromises, the cutting itself could be imperfect, mass reproduction does not result in perfect copies (consider even the varying quality of the vinyl material used), packaging and shipping issues (abrasions, warped records anyone?), accidental scratches, dust and grime, imperfect turntable setup (VTA, VTF, azimuth, leveling, antiskating...), varying quality of cartridge/stylus/cantilever (tracking issues, inner groove distortion), phono pre-amp RIAA curves, etc.

Compared to the data integrity of a digital system, analogue just cannot match. The consistency of playback with digital would have had been revelatory back in the day; certainly a much more consistent quality of playback each time and sonic differences between good CD players are much smaller than that between different turntables and cartridges. As I wrote previously, I do believe analogue LP playback can sound fantastic and IMO there's no point rehashing the tired analogue vs. digital debate since there are so many factors influencing a good sounding recording and playback system. Yes, some LPs can sound better than some CDs and vice versa. Digital has fantastic sound quality if the original source isn't dynamically squashed to distraction, and vinyl has attached with it the pride of ownership unmatched by CD/SACD/DVD-A/Blu-Ray/files.

Forever: If anything, this is perhaps the least true comment about CDs. As an enduring object, the petroleum-based, non-biodegradable vinyl LP cannot be beat by digital as far as I am aware. It has been said that an LP can last 100's of years if stored properly. Easily spanning any of our lifetimes. On the other hand, there are instances of CD "rot" over time although personally I have many CDs hitting 20 years and they look good so far. Even 15-year old CD-Rs seem OK to me so far stored in a cool basement away from direct sunlight or inclement weather. Hard drives are more problematic and in the last 10 years of running my music server, I've probably had to replace each hard drive every 5 years on average with regular use. Solid state drives (SSD) are a bit of a mystery to me so far. I use them as boot drives rather than music storage due to cost and so far my oldest unit of about 5 years seems to be OK.

However, with digital, we do have the ability to make perfect copies each time so with some discipline around backing up (probably good to have 2 extra copies around stored at different physical locations), one should be fine for a lifetime. PCM is ubiquitous and the free FLAC file format I suspect will easily outlive any of us reading today... I wouldn't be nearly as confident about DSD file formats' longevity however (especially given how primitive they are).

"Perfect sound forever" as a description for the CD and digital audio in general has a 'ring' of truth to it. The key is to say it within a reasonable context and seeing it for what it was meant to be... A catchy ad slogan which did highlight the merits of digital audio. And it worked!

In keeping with my recent interest / "re-acquaintance" with the vinyl format, here's an interesting article on the "rise" of vinyl. We'll see how this pans out in the years ahead. As I've checked out the vinyl stores locally, I notice that there's a nice mix of young and older folks looking around. I see about as much interest in the used vinyl as the used CD bins 'round here. There's a local large chain store that sells new LPs and I don't think there's large volume going thorough. Vinyl growth or not, I think it's fair to say that sales of a physical music product peaked at least a decade ago and it's not ever coming back for many reasons - convenience, storage, maybe environmental consciousness, the economy...

As imperfect as vinyl is, I'm having a blast rummaging through the bargain bins sorting through the oldies from the 70's and 80's constituting memorabilia from my "soundtrack of life" through the formative years :-). I've found many very clean, essentially mint albums over the months. To be able to buy it for "pennies on the dollar" makes it even sweeter!

One last thing. Needless to say, economically, there is one very important reason for music labels to "push" for a resurgence of vinyl. Anti-piracy. "Perfect sound forever" also means "perfectly copied forever". I sure hope we don't get a systemic situation where digital becomes maligned, crappy CD/digital downloads are released, and sonically decent versions are reserved for the LP release only at high prices. Doing so would sadly bias sonic quality towards the technically less accurate format.

Enjoy the music and the rest of summer (N. Hemisphere)!