As I mentioned before, I've been going through the bargain bins at the local LP stores and it has been great finding stuff I hadn't listened to for years! Tonight, as I'm typing this I'm getting reacquainted with Henry Lee Summer's I've Got Everything album for example [recent article on Summer]. It indeed has been decades since I've heard "Hey Baby"...

Okay, on to the main topic for this post.

I noticed over the last month how getting into vinyl resulted in an accumulation of "paraphernalia". I've got a little collection of "things" now on my music rack that wasn't there before. Plus I've got a compartment where I keep my albums for a few of these things. It's all part of the ritual of maintaining a clean LP collection. I suspect you can tell the "serious" vinyl audiophiles from the "casual" based on whether they have these items hanging around; many of which I would consider essential! I'm sure this is 'old hat' for you vinylphiles already, but for those curious, without further ado, let's have a peek at what I've accumulated: 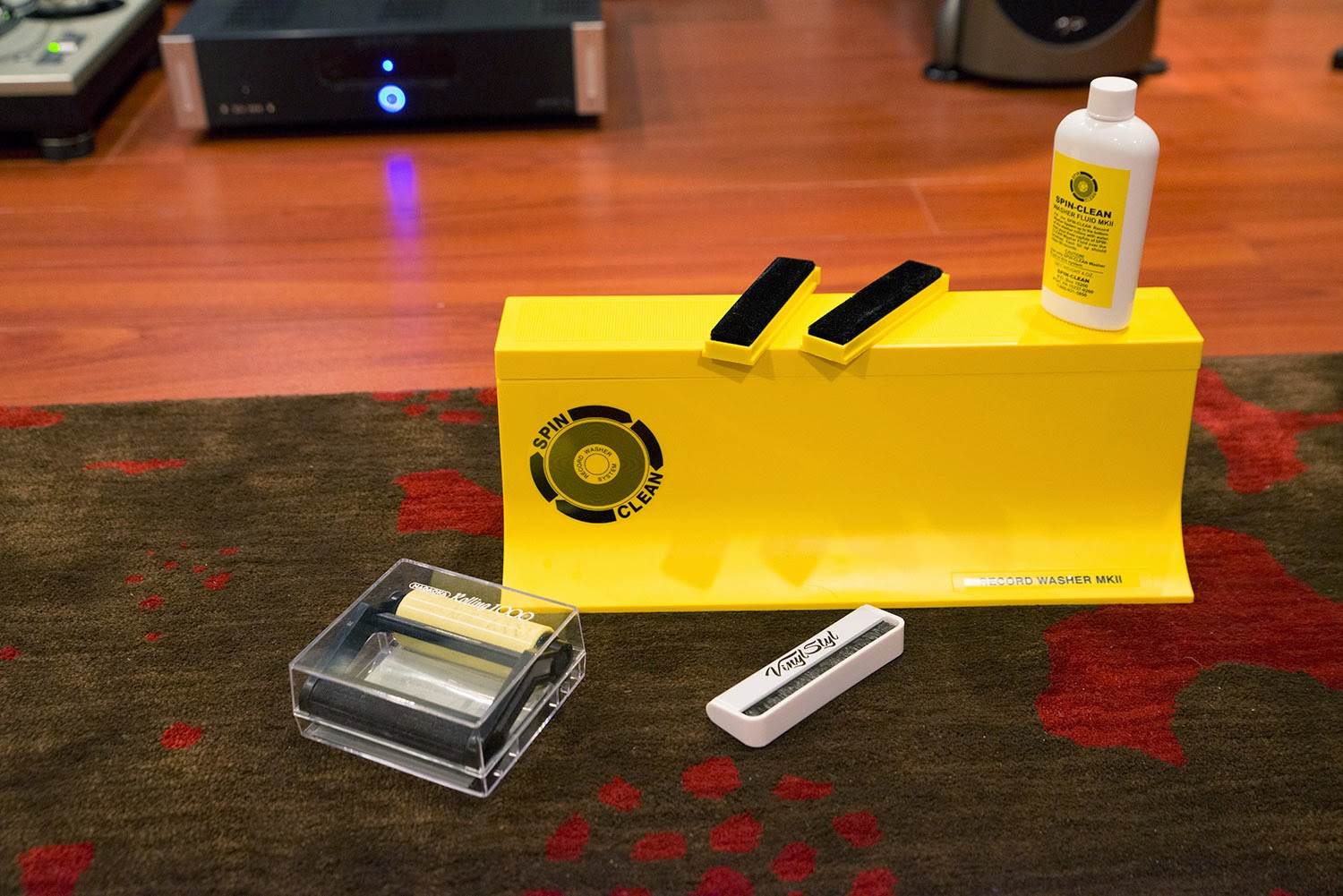 Without a doubt, this "class" of products is essential. There's just no way to experience decent LP sound unless it's clean.

For dry cleaning, I started with the Vinyl Styl anti-static carbon fiber brush. It's relatively cheap at $15 or so and good to brush off surface dust as the disk spins on the platter before dropping the needle. Often dust is just moved around and you end up with a "line" of dust unless you direct the dust off tangentially. I've also seen a demo where the brush is moved medially towards the spindle to touch the central metal part. Supposedly this discharges the brush allowing it to hang on to the dust particles. I personally have not found this consistently does the job.

There are of course many such brush products out there. I've heard of folks complain that carbon fiber brushes can leave "hairs" or micro-scratches on the LP. I have not had either of these problems. Just don't press down too hard when cleaning the vinyl surface.

To the left in the clear plastic box is the Nagaoka Rolling CL-1000. I got this off eBay for about $120 from Japan shipped. It's not cheap. Basically it's like a fancy sticky (elastomer) lint brush meant for dry LP cleaning. I have wondered if the cheap sticky roller from the local store would do the trick but too chicken to try :-). In any event, this thing works quite well. I don't know how deep in the groove it can get but the ability to lift dirt and dust off is better than the plain carbon fiber brush. I had noticed with the first usage that I saw a little bit of residue which was removed with a second round of cleaning and no problem thereafter - I think it may have come from the clear plastic protector wrapped around the elastomer that had to be peeled off. I usually will use this on new LPs just to remove the small amount of dust/particles rather than doing a wet clean. Static charge builds up when rolling so make sure the environment is clean - I often will do the rolling on top of an anti-static inner sleeve. (I've noticed some much cheaper ones like the Stop-a-Clicks; I presume this would be fine at a much lower price point.)

The yellow box is of course the Spin Clean. IMO wet cleaning is essential! There's no way I'm going to play the majority of my used purchases unless they've been through a wash cycle. The Spin Clean Mark II works great. I have had some albums cleaned at a local store with their VPI 16.5 machine and I thought the result was really quite similar so long as I took care with the Spin Clean. I have not had any issues with scratching or abrasions. A few observations / suggestions:

1. Use distilled water especially if your region has high mineral content 'hard' water (not really a problem here in Vancouver).

2. After the wash, hold the LP over the Spin Clean to let the residual water drip off the disk before drying for about 10 seconds. This reduces the amount of fluid to wipe off and noticeably less water spots after drying.

3. Buy some good, soft, absorbent microfiber cloths to use for drying. The Spin Clean kit comes with a couple of rather substandard drying wipes.

4. I never use much of the provided cleaning fluid. My formula: fill the Spin Clean up to 90% distilled water, 10% with isopropyl alcohol, and just 1 cap of the starter kit fluid (they recommend 3 cap fulls).

5. Don't let the reservoir fluid get too dirty... I usually wash less than 20 used albums before throwing the fluid out. 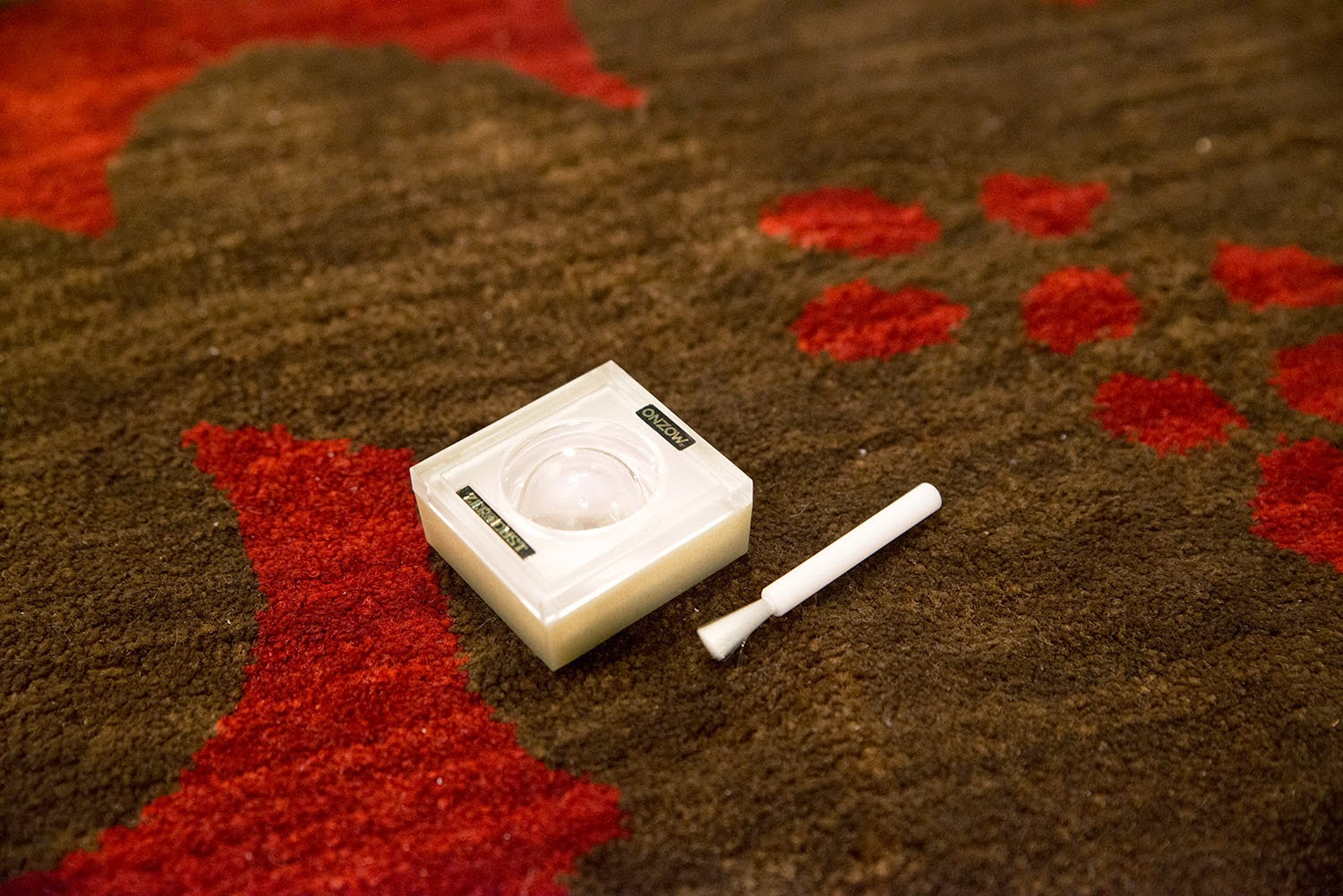 Have to keep the stylus clean of course. On the right is the "free" stylus brush provided in the package with my Denon DL-110 cartridge. Does the job with very delicate fibers.

On the left is the Onzow ZeroDust. Removing the plastic cover reveals a piece of convex gelatinous substance you can gently "drop" the needle on, removing any dust or pieces of vinyl stuck on. I first saw one of these at AudioPhil's place and liked it - easy and quick.


Then I got all this stuff: 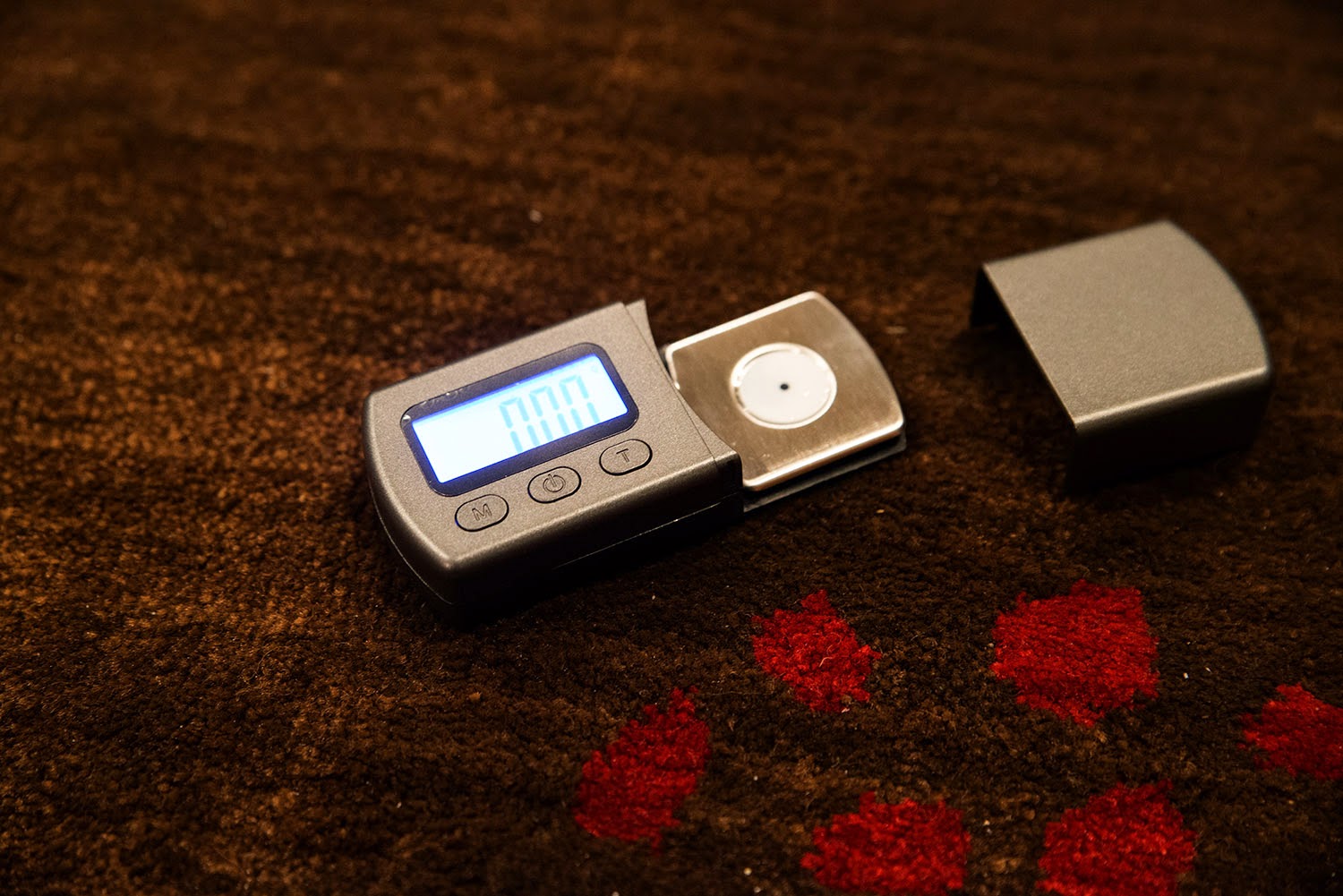 Precision electronic VTF scale. Good down to +/-0.01g. The manual scale on the Technics SL-1200 standard tonearm counterbalance is quite accurate already down to about 0.1g from experience. It's nice to have this for confirmation though plus it's not expensive (~$20). 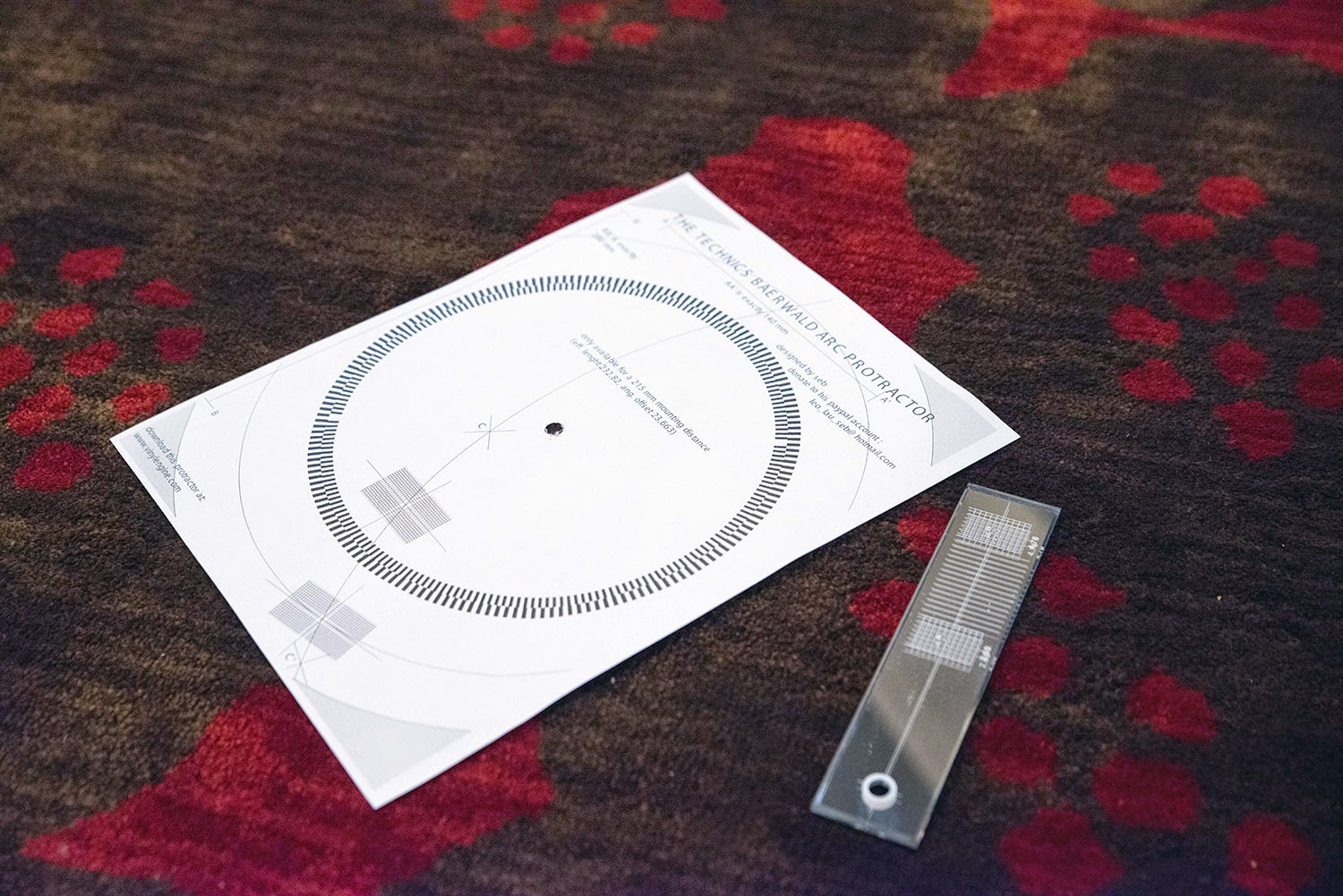 Without question, the most arduous task with turntable setup is getting the cartridge aligned. A reflective alignment tool such as the ruler-like device to the right is helpful. However, with my Technics, the freely-available-to-print Baerwald Arc Protractor off Vinyl Engine is all I really need. Just make sure you print it out 100% with no print scaling to keep the dimensions accurate and punch the center spindle hole accurately. 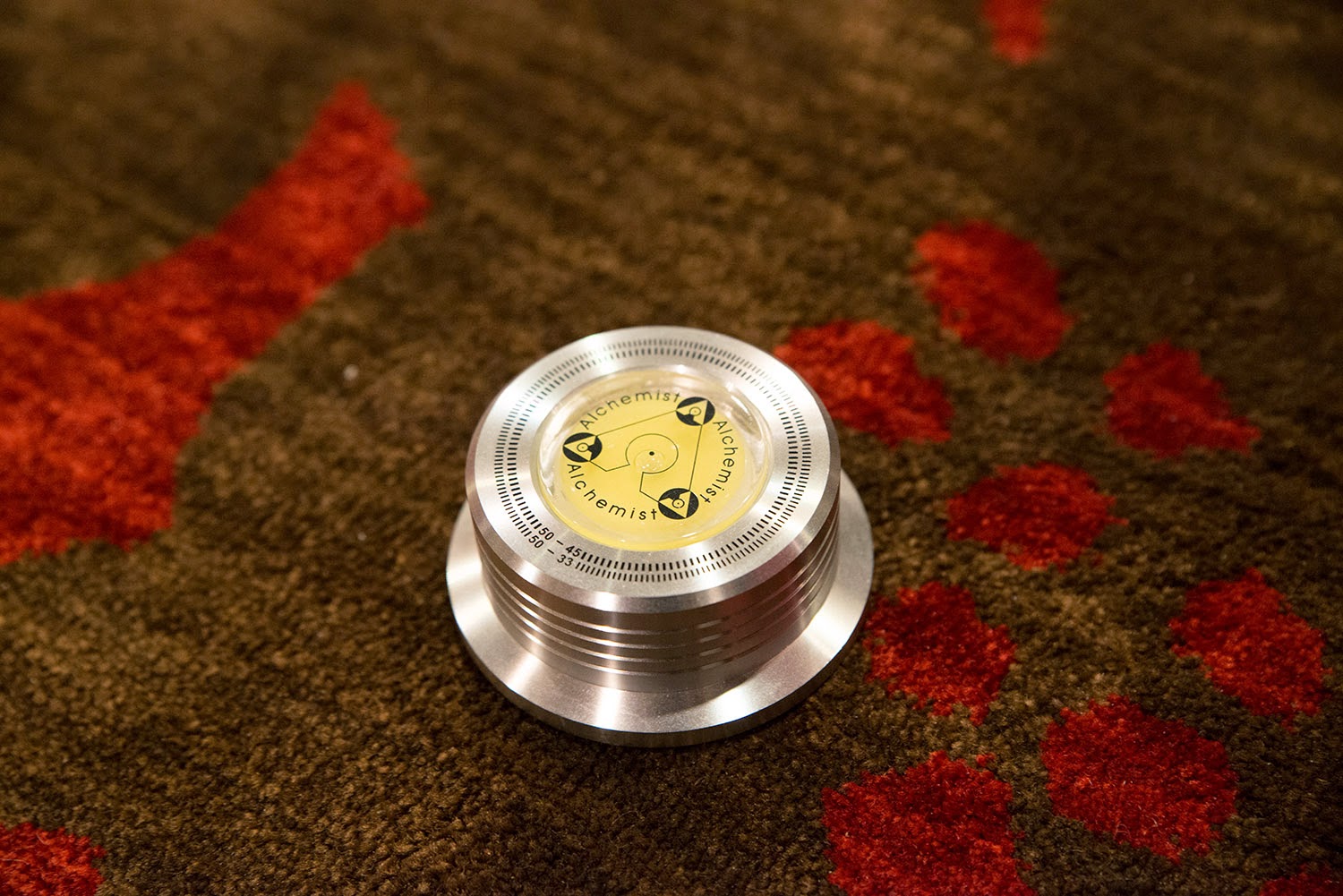 I got one of these inexpensive ~400gm record clamps off eBay from Asia. I don't buy noticeably warped records so I don't use this much but there is a convenient spirit/bubble level on top to make sure the turntable is flat. The 50Hz stroboscope is useless for me here in 60Hz AC land.

Some people will use things like USB microscopes to check the Stylus Rake Angle (SRA) for VTA calibration. I haven't gone to this level of fine tuning yet (and possibly never will plus I really doubt it's all that important since slight warping is common yet I don't generally hear any difference when the needle tracks over those areas!). One idea has been to use a macro lens on my dSLR to take close up pictures using a well aligned tripod... I'll maybe give that a try. 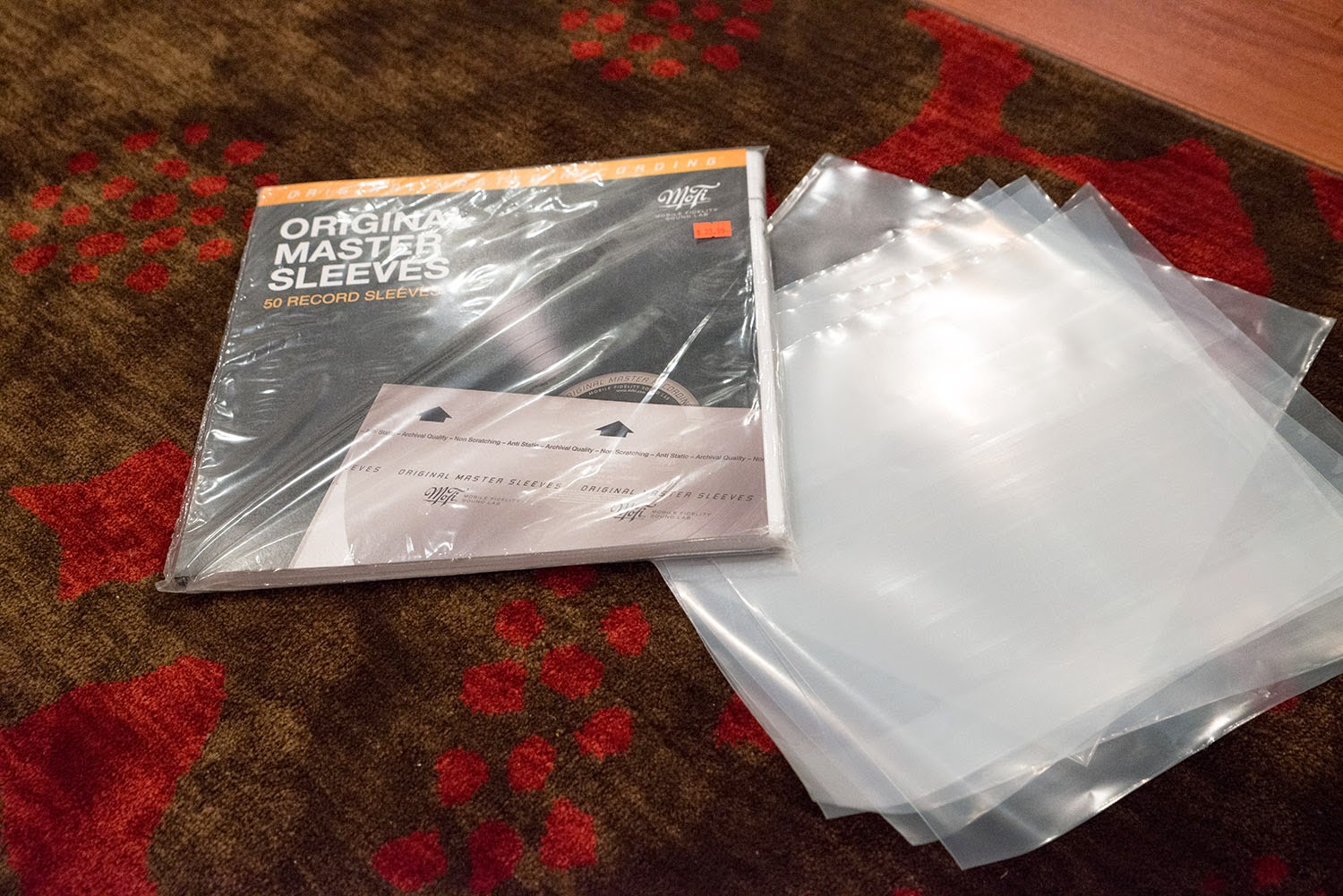 After cleaning used vinyl, there's no way I'd put them back in the original old record inner sleeves. So far, I have found the Mobile Fidelity "Original Master Sleeves" a must have. They're soft, thin, and I have not had any problems with powder residue some have complained about. At about $20-25 for a pack of 50, they're not cheap though. One gripe I've had with a number of new 180g remasters (like my new Guns N' Roses Appetite For Destruction) is the shiny paper used without any soft inner lining. Often with the tight fit of thicker vinyl, the paper sleeve almost guarantees abrasions when putting the LP in or taking it out. Disappointing and all too common to take out a new LP for the first time feeling the resistance of the inner sleeve when pulling out and finding abrasions already on the vinyl.

Then there's the transparent outer sleeves which will keep the outer artwork safe from scratches. I've been able to find good 4 mil locally for about 25 cents a piece.


Well, that's not too long a list of paraphernalia I suppose... But it's certainly more than one ever needed for a CD collection (all I had was a soft microfiber cloth to wipe off smudges and a few extra jewel cases). Taken together, there's at least $300 of "stuff" purchased; not counting the extras for the sleeves and obviously I'm not buying anything extravagant here. Of course, not all of this is essential, but significant considering the price of my used Technics SL-1200 M3D (only around $500). Something to keep in mind for those getting into vinyl. However, the bargain used LPs (at least a lot of the 80's stuff I like) can be had for really cheap!

I'd love to hear what other items you've found useful with your LP rig... How much difference do you think a vacuum record cleaning machine makes compared to washing by hand or a relatively inexpensive system like the <$100 Spin Clean?

To end off this post, I remember awhile back reading one of Stephen Mejias articles in Stereophile where he observed that when others realize one has a record collection, friends and associated will start offering up LPs they don't listen to any more... Indeed, I was fortunate enough to have a friend offer the following: 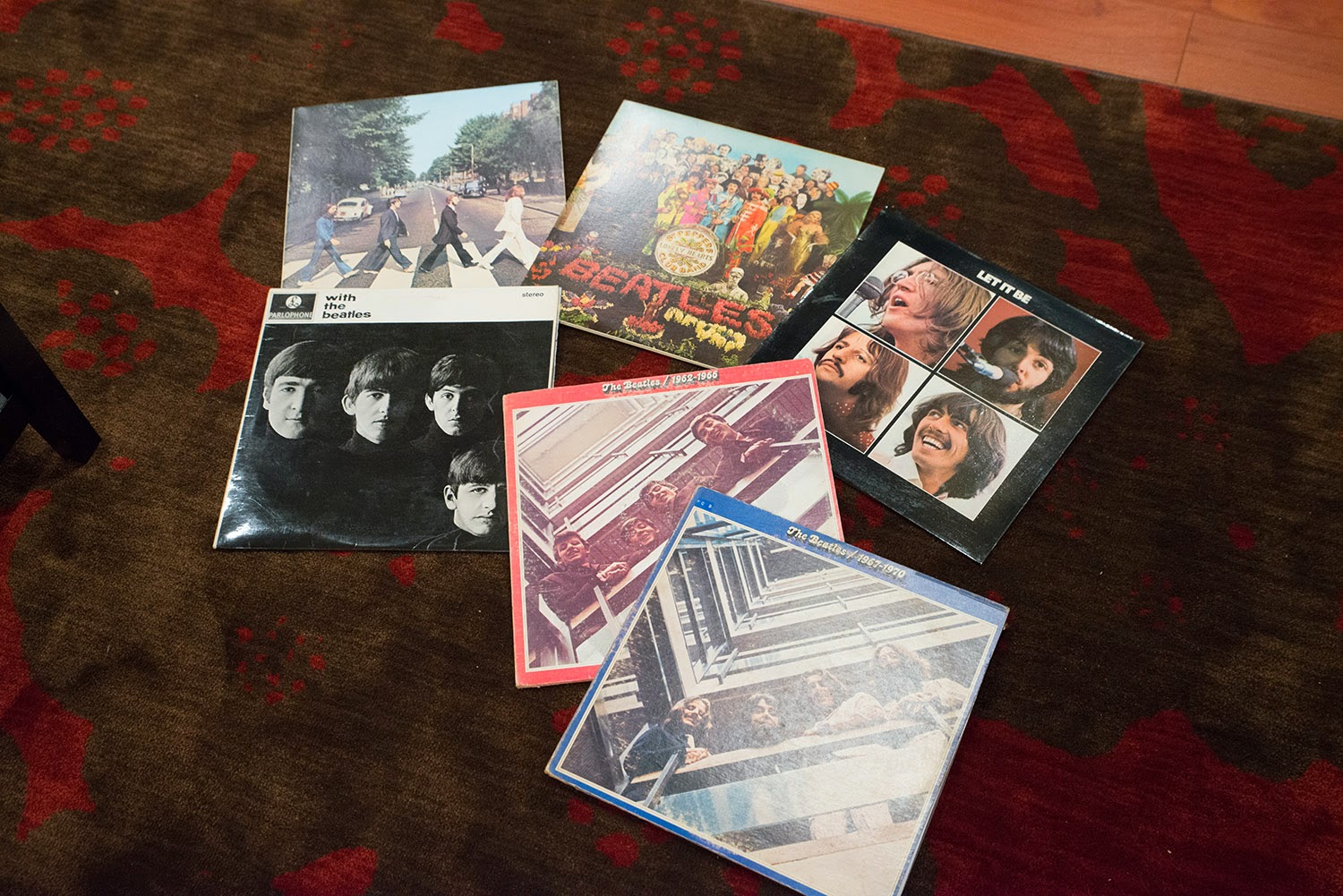 Interesting early Beatles pressings from Asia purchased when first released - Abbey Road and Let It Be appear to be pressed in Hong Kong, With The Beatles from Malaysia, and Sgt. Pepper's from Singapore. I'm not sure about the Red and Blue compilations.

I have both an early Canada pressing of Abbey Road and later pressing of Let It Be from the mid-1970's for comparison. As best I can tell, the Asian Abbey Road sounded cleaner and Let It Be was about the same. I compared Abbey Road with the recent 180g LP remaster and not unexpectedly, these older pressings sound softer, and perhaps less detailed compared to the more compressed and digital remastered LPs. This is the same impression listening to an early Dutch pressing of Dark Side Of The Moon (thanks Ingemar!) compared to my new 180g remaster. It's subjective which mastering one prefers of course but there is something special to be said about holding and playing an album of historical importance physically created before I was even out of diapers. As I have noted before, these properties of a physical object add to the joys of vinyl collecting irrespective of sonic quality (obviously I'm not getting the same vibe with new digital remaster LPs). 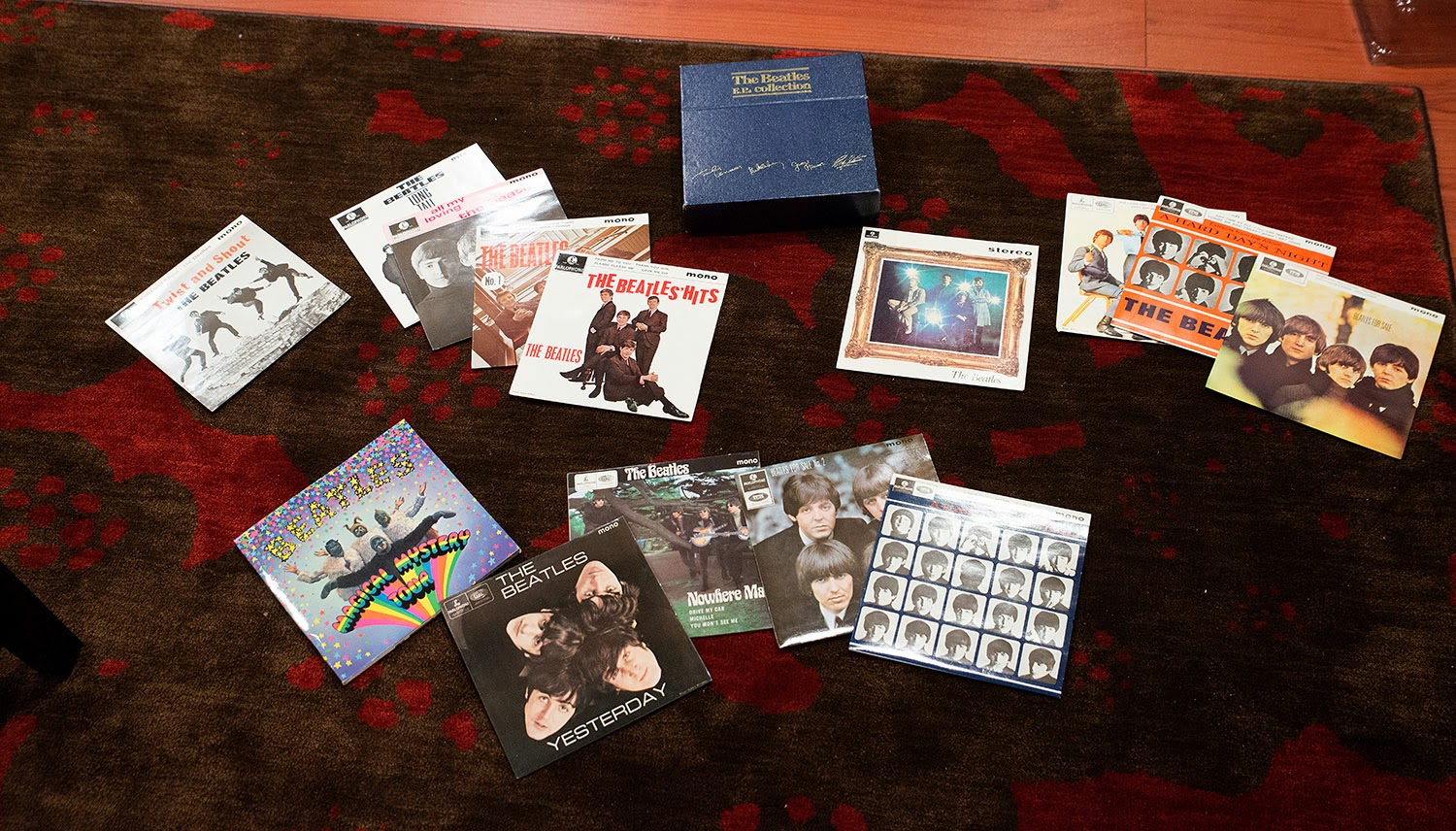 The Beatles E.P. Collection of 45's in both original mono and stereo! Mint vinyl condition! Thanks Paul :-).

Have a great weekend and week ahead. Gotta run off to listen to some "classics" now...