E-Mail: "Full Dynamic Range" - Now there's a marketing phrase to get behind!

The other day, I got this E-mail from an audiophile friend:

I think this is funny. A contradiction in every way imaginable which is why I wanted to share it with you. I know it’s not your type of music and although I still listen to it sometimes, it’s mostly youth sentiment for me. One of the loudest and fastest bands back in the days was Terrorizer. Their drummer (Pete Sandoval) is one of the fastest drummers I have heard, he's amazing. But unfortunately production for this kind of music wasn't always very good. It's often compressed to hell and equalized with typical "rock" settings; increased lows and highs and suppressed mids. It's often overdone in my opinion. I do think production of hard rock and metal albums have improved over the years but back then, some were just downright bad. This particular album wasn't that bad though, it was actually pretty decent from what I remember.

Terrorizer was a so-called super band. Some of the best musicians from different bands came together to produce one album. The band split up that same year but after 2005 they came together a few more times to release other albums. This album was their debut from 1989, titled World Downfall. It is considered one of the most influential albums in the genre and now a classic that every fan of the genre should own. I ordered this album on vinyl recently, limited to 100 copies, in "Downfall Orange". What struck me was that it is marketed as a "Full Dynamic Range" version. I would never have ordered it if that wasn't mentioned! Could this be the new marketing phrase? The end of the loudness wars? How much dynamic range can be in music like this? And how good can it really sound? I was curious and I could not resist the urge so I bought it ... :). Fitting label too, Earache! Haha! 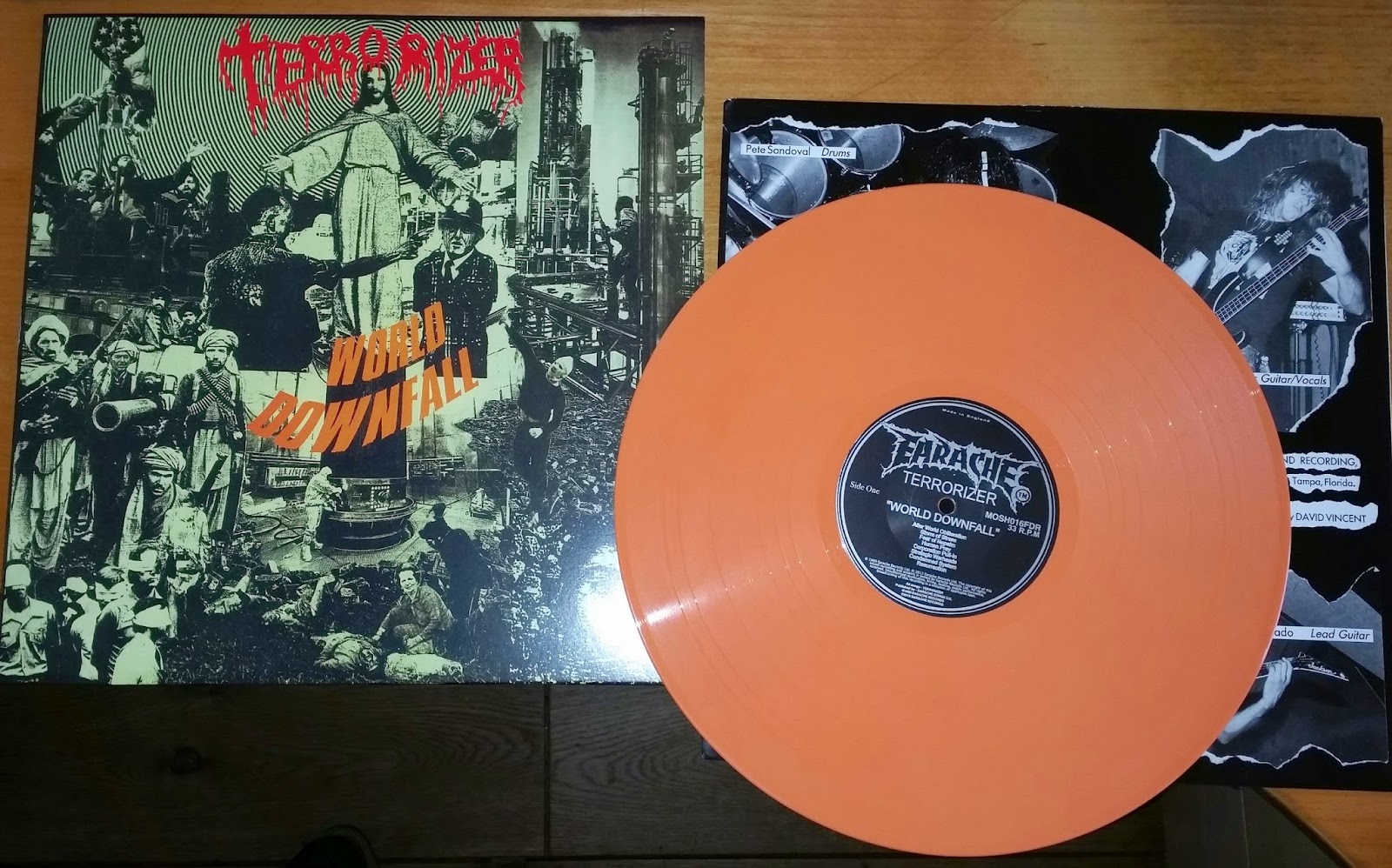 Here's a screenshot of the waveform. The entire album looks similar:

The average album DR is 12. I think that's amazing!

The album sounds spatial, black background, there's air around the instruments and the drums sound natural. Basically, the album just sounds very good. Obviously the entire album is one massive wall of noise so I can't say it’s not tiring to listen to but at least now it’s a good sounding wall of noise haha! :D.

I am surprised that the end of the loudness wars (if that ever happens) would see a start with albums like this. But if this is it, it definitely looks promising!

Funny story about the drummer, the band once played a prank on him by making him listen to a band that used a pre-programmed drum machine, and pretended it was a real drummer who could play faster than he could. He was gutted, and went on to practice until he managed to play faster than the machine.

PS. I don't advise you listen to the album. If you decide to do so you it's at your own risk. I'm not liable for any damage this might cause, physically or mentally! Haha! Just kidding! You’ll live J.


Well. That would be amazing wouldn't it?! To start advertising music as "Full Dynamic Range" (with a nice logo maybe?) to grab the interest of those who actually understand the importance of mastering quality. Slowly this could build into a "movement" of sorts that might even capture the interest of the mainstream music industry - imagine seeing CDs being advertised like this...

As I noted in this previous article, I actually think that the next round of remastering will actually swing the pendulum towards "full dynamic range" to differentiate the sound from current loud dynamically overcompressed releases. A movement of this sort would be a true advancement of sound quality that would make the push towards "High-Resolution Audio" and format wars like PCM vs. DSD (yawn...) audibly irrelevant in relative significance.

Remember, we should be cautious about reading too much into DR values of vinyl rips and comparing directly to a CD version, of course. However, also remember that vinyl is limited in how much compression can be applied in order to prevent tracking issues. I wonder in fact if this limitation may be an important reason why LPs have survived - they can sound better than the corresponding CD because the masters used to cut the vinyl have always needed to be of a decent dynamic range. Although the track is loud; visibly so zoomed out like this, I'm sure zooming into the waveform would reveal zero clipping / peak limiting which is what kills the DR value.

In other news: we just saw the release of Bruce Springsteen's Born In The U.S.A. available on HDTracks at 24/96 with a DR of 9. Original first CD release in the 80's - DR13. Born To Run is even worse with DR8 (I think even the 30th Anniversary CD release may be better). Hey Columbia Records, you do realize a little bit more audio realism can be squeezed out from 24-bits, right (which I hope is what audiophiles are looking for in these "better than CD" releases)? As usual, I highly recommend checking out the Dynamic Range Database to get a sense of the mastering quality before jumping into these so-called "high-resolution" albums.

Thanks to everyone for trying out the "LP Needle Drop Blind Test", especially those who took the time to submit survey results. The survey site is closed although the FTP remains open for now. I'll likely close that off this weekend.

Work has been crazy-busy this last 2 weeks so I'll try to get results up in the next week. Stay tuned...

Enjoy the music everyone! (I'm trying to find the time as we head towards a busy holiday season...)