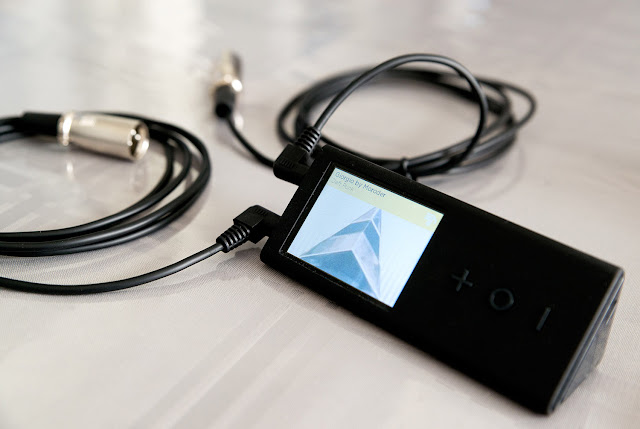 As promised in my previous post on the PonoPlayer, I was going to be getting some 1/8" TRS-to-XLR balanced cables to try out with the PonoPlayer. Mainly I just wanted to see for myself the optimal level of functioning for this device... Already the unbalanced output is capable of respectably low noise and very reasonable distortion numbers especially with high samplerate material for a portable device. I therefore expect the balanced output to be better. As you see in the image above, those cables arrived; inexpensive ones off eBay at about $12USD for the two from China.
Before I jump to the balanced cable measurements, I just want to have a look at that Ayre filter again. The reason being is that the combination of high frequency roll-off and reduced ultrasonic suppression reminded me of non-oversampling (NOS) DACs such as the TEAC UD-501 when digital filter setting is turned OFF or the old MUSE Mini TDA1543 I have from a few years back.

Check this out, here's the frequency response curve between NOS and PonoPlayer: 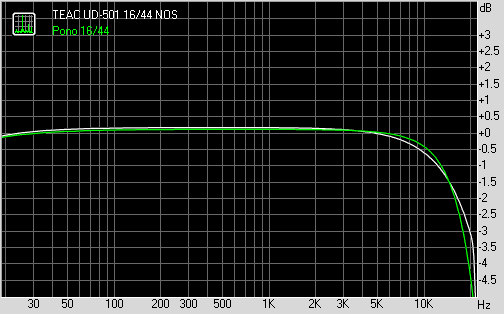 But the difference of course is that although weak, the PonoPlayer at 44kHz does actually do some filtering and will remove extreme ultrasonic noise:
A typical digital filter would suppress noise by around the Nyquist frequency - 22kHz as per the default 95% bandwidth SoX filter. The PonoPlayer/Ayre filter allows leakage up to 45kHz and a NOS DAC doesn't attenuate the noise beyond.

I was also curious about the time domain performance as viewed with the spectral frequency plot:

Another visual perspective on the noise. Notice that the PonoPlayer does not show significant group delay in the higher frequencies. As a result, phase shift through the audible spectrum is not an issue. I'm also seeing a little "trail" in the aftermath of the impulse. Looks like there's a little DC offset that gradually decays over milliseconds; not sure if this is from my ADC measurement device dealing with this impulsive "pop" or actually from the DACs:

Let's now have a look at the PonoPlayer's balanced output. First, it's worthwhile being aware of the following diagram:
I actually had to open up the XLR casing of the cheap TRS/XLR cable I got from China to resolder the pins to correlate with the connections above. Unless you know the cable you're getting is specifically compatible for the PonoPlayer, it's worth double checking with your multimeter to make sure it's connected as above.

With balanced output, here's the oscilloscope image for a 0dBFS 1kHz square wave: 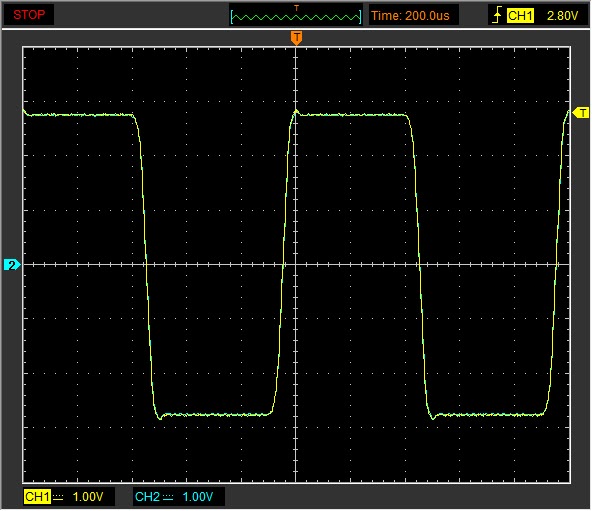 Now as for noise level, dynamic range, and distortion using RightMark (let's just look at 24/96 since as we have seen, 16-bit resolution is no problem at all for reputable modern DACs)...

Yes, the balanced output is an improvement (compared to single-ended "Pono 24/96"). I'm measuring a 2.6dB improvement in terms of lower noise floor and higher dynamic range. That's 17.9 bits of resolution - let's just call it 18 bits which is again the same as Stereophile's measurements. Notice that there is improvement in the distortion levels compared to unbalanced output by using both amplifiers independently for each channel. I've included also the results of a couple other DACs featuring XLR balanced output for comparison - the Squeezebox Transporter and ASUS XONAR Essence One. As in my previous report on the PonoPlayer, it's rather unfair to compare the portable PonoPlayer with these desktop units but it does give us a look at the kinds of resolution available with better/more expensive DACs.

A few graphs to go with this:

1. The Ayre filter appears to be a very gentle filter which as we know before, allows quite a bit of ultrasonic noise through. It does remove the extreme ultrasonics by 45kHz compared to an unfiltered "NOS" setting.

Interestingly, the frequency roll-off and impulse characteristics (no pre-echo, minimal post-echo) resemble NOS. Maybe someone would like to do an ABX listening test on this, but based on just the electrical characteristics, it's probably reasonable to say that folks who like the "NOS sound" for 44/48kHz material will like the Ayre filter. Removing all the very high frequency noise above 45kHz compared to unfiltered NOS is good and may be protective of unstable amplifiers (reduce risk of parasitic oscillations) and reduce the potential of even more intermodulation distortion.

2. Balanced operation improves the PonoPlayer's noise floor by about 2.5dB in my tests, bringing the resolution to just shy of 18 bits. There's a concomitant increase in amplitude. That's quite good for a portable device of course.

As you can see, there was no need to spend much on expensive cabling to show the improvements with balanced operation (consistent with my previous tests on cables)... Not that I see any problem with buying better cables of course since build quality and esthetics are significant factors (and admittedly those eBay China TSR-to-XLR cables are crappy and I would not use them in my main system!); just not necessary for demonstrating an improvement in audio fidelity.

Finally, how does balanced PonoPlayer sound? Well, I connected it to the balanced input of my Emotiva XSP-1 preamp for a listen. As expected... The PonoPlayer sounds good as previously reported. Quiet background, good control throughout the frequency spectrum. Sure, it could be used as a digital front-end in a soundroom but it would be rather inconvenient without the usual amenities (eg. no remote control, small display from across a room) and would be rather cumbersome to have to connect to a computer every time to transfer songs if one has a large library.

Parachronistic (adj. belonging to an earlier time) - This word kept coming to mind whenever I think about the PonoPlayer. It feels like a device that would be at home in the mid-2000's (with a few "high-tech" features like capacitative touch screen and 64GB internal solid-state storage atypical for those days). I don't see parachronicity as a negative of course since this can be a likable trait (just like Neil Young's likability as a longtime artist I guess). It harkens to an earlier time when we just had iPods, Creative NOMAD/Zens, Archos, Sansas, Diamond Rios, Zunes of yesteryear for music playback before widespread wireless communications, ubiquitous web surfing, and the constant "push" of social media. A time when the pace of life seemed a little slower, expectations for multitasking seemed a little less, and certainly in my life, more time to savour the new albums rather than just catching the hit singles...

As much as I have been a critic of Pono and its claims, I can appreciate this rustic invitation. This invitation likewise extends to other parachronistic technologies in the audiophile world. The love of tube gear, vinyl discs and turntable/tonearms being the most obvious. More effort, care, attention to detail are all part of the playback ritual rather than instant access. These devices may be "cool" in their retro appearance or appeal to one's sentimental human emotions - and that's just great as a hobbyist! There is a psychological function. It's important to remember that this psychological effect is part of the "non-utilitarian functions" for those who love the hardware apart from the (presumably) main goal of high-fidelity audio - the search for optimal sound quality or specifically sonic accuracy. Although the PonoPlayer does sound good and measures reasonably well, it's not because of its simplicity or appeal to sentimental tendencies. We can say that perhaps this simplicity can encourage more engagement in the music and joy because the device does not detract with all kinds of whiz-bang apps and the ability to surf. Simplicity is of course not a bad thing even though YMMV; but obviously let's not equate this with some kind of improved sound quality itself.

Oh my, how quickly August has flown by! Almost back to school time :-(.

Until next time, enjoy the music...

Posted by Archimago at 08:45:00
Email ThisBlogThis!Share to TwitterShare to FacebookShare to Pinterest
Labels: Balanced vs. Unbalanced, Pono