In the last few months, I've been doing more with REW measurements and examining the acoustics in my room, culminating in implementing digital room correction with my computer audio playback. It is because of this that I made the posts recently looking at speaker cables and the effect of speaker grill(e)s. Along the way, I also measured the effects of a couple of simple acoustic panels I have in the room to objectively examine the outcome.

About a year ago, I decided that I really should try to tame the lateral first reflections off a glass cabinetry unit to the right side of my room. As you can see in the picture below: 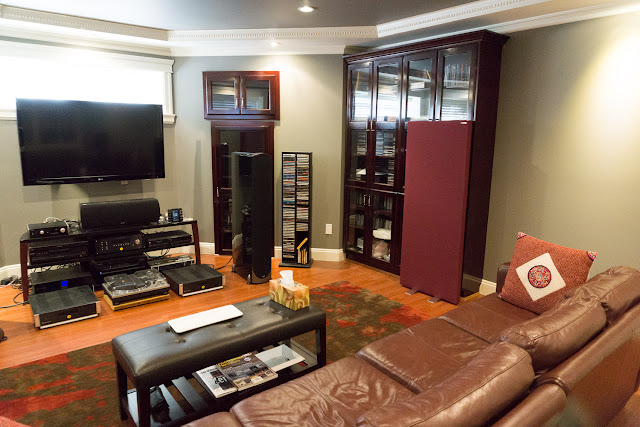 The other side of the room is just bare drywall so there's a bit of asymmetry to the sound reflection and this probably needed to be tamed. 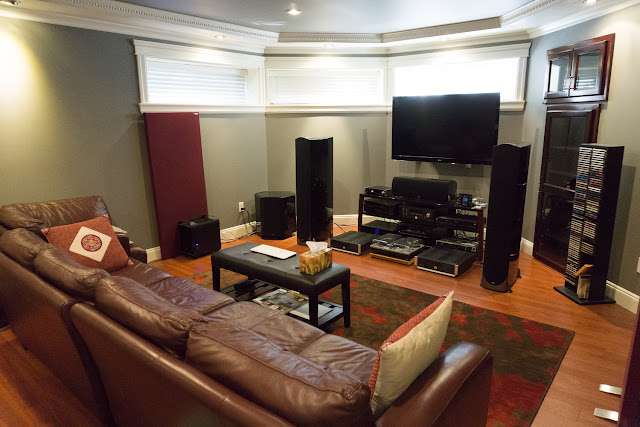 Because the storage area behind the glass cabinet holds a number of my cherished CDs, Blu-Rays, headphones, etc... I needed acoustic paneling that could be moved out of the way easily. I looked around and eventually settled on a couple of GIK Acoustics Freestand "gobos" as shown in the pictures (burgundy). I ordered them on-line and picked them up across the US-Canadian border to save on costs (thankfully, this was a year ago before the Canadian currency really "went south"). As in the image above, the gobo to the right, was set up with the metal stands in place, while for the one on the left, I left off the stands and just made sure it's propped up stably with the HTPC on one side. Positioning was confirmed using a mirror to show the reflection point of the speaker at the sitting sweet spot. The gobos are 24" x 60", 2" thickness, and a bit of air space (1-2") allowed between the absorption panel and the wall or glass cabinet behind.

Realize that a 2" absorption panel is NOT going to act as a "bass trap". It's just not going to be effective for those long wavelengths. This is for the purpose of absorbing mid-range frequencies bouncing off the sides, and I would expect, this effect should be easily measurable.

As you can imagine, the test is rather straightforward... I will measure the room response at the sweet spot over the couch with and without the panels in place. As per the previous tests, all measurements will be done with the E-MU 0404USB a ADC. For convenience the 0404USB was also used as DAC output. I also used the calibrated Behringer ECM-8000 microphone that I bought many years back. Preamp as shown is the Emotiva XSP-1, shielded RCA cables, dual monoblock Emotiva XPA-1Ls, and my Paradigm Signature S8v3 speakers. I'm running the latest version of Room EQ Wizard v5.12, with a 48kHz sampling rate.

First, let's look at the frequency response with and without the panels:


As you can see already, panels such as these do not have any significant effect in the bass range; in my case everything below ~180Hz is essentially untouched. On the whole, the absorptive nature of the panels tends to dampen the amplitude slightly, and in some areas of the frequency response, made smoother (eg. right speaker from 1kHz to 10kHz). Remember that absorption panels are not meant as EQ's so I'm certainly not expecting too much change. Since I did these measurements as part of my recent equipment set-up revamp, this was before any EQ/DSP was applied to help smooth out the bass frequencies.

We can zoom into the time domain impulse performance to see the reduction in reflections off the lateral walls:

Note that for both tracings, the red ones are with the panels in place. The difference is relatively clear. The direct sound from the speakers in the first 2 milliseconds has not been changed with the presence of the panels. However there is reduction of the reflected sound starting at 3-4ms especially with the right speaker - the one closest to the glass cabinet where the extra reflections around 4ms is evident and suppressed with the panels in place. It would be nice to reduce the large peak around 2.9ms from both speakers which probably has to do with reflections off my ceiling (obviously a bit more involved if I want to hang a "sound cloud" overhead).

Finally, the overall effect is that we see the reverberation time for the room has reduced with the panels in place. The typical measurement is the RT60 referring to the time it takes to drop the impulse amplitude by 60dB in the room. It can be calculated using the Sabine formula for room size and estimates of wall reflectivity. [Note that the Sabine formula is at best an estimate in small rooms and real RT measurements should be done with an omnidirectional sound source as per Toole - Sound Reproduction: Loudspeakers and Rooms 2nd Ed, p. 64, not the typical unipolar speakers like mine.] And in REW, it can be measured as a function of the frequency. This time, measured with both speakers driven:


Notice that I am using the Topt calculation here. More details can be found on the REW help page for the various ways the calculation can be performed. Adding the panels (red tracing) has reduced the RT60 to below 0.5s throughout the spectrum. Perhaps more importantly, the reverb time is smoother throughout the spectrum as well (especially that big jump around 700Hz without the panels), making for less coloration in that certain frequencies are not lingering around substantially longer than others.

The 0.5s reverb time is probably a typical target for a home soundroom. I'm not after a totally "dead" room with no reverb since anechoic chambers don't make for particularly pleasant experiences. So far, I have not seen any clear recommendation for a domestic listening room... However, in controlled environments like studios, I have seen recommendations anywhere from 0.3 to 0.5 seconds. Ethan Winer talks about typical studio control rooms of 0.4-0.5s in his discussion here.

Of course what I've done so far is really quite minimal. I'm thinking of buying more panels for the sides (wall mount the left, move the 2 gobos together to the right to cover more of the glass cabinet). I should look at getting thicker carpeting to reduce the early floor reflections. A ceiling panel or "cloud" I suspect would make a significant difference. Maybe something up front to reduce reflection from the TV screen when not watching a movie... Many obvious potential ways to reduce the reflected-to-direct sound energy ratio but at the same time, I don't want to overdo it either!

In any case, for now with just the two panels, the difference is beneficial though difficult to A-B compare. The soundstage seems more centered now that the asymmetrical side reflections are more balanced and this basically addresses an acoustic "defect" in my room (ie. sides consisting of different material with significantly different reflectivity); not necessarily or likely a reflection of the lower RT60.

Admittedly there is controversy whether targeting RT60 is even necessary. Specifically, in small spaces, do we even need to worry about these early reflections as discussed in this Audioholics article from early June. There are lots of variables including the type of music being played and personal preference.

As per common wisdom, it's important to remember that room acoustics play a huge part in the overall sound achieved. There's really no point spending tons of money on all kinds of hardware if some effort isn't made to examine ways of improving the room characteristics or compensating for untoward room effects. Notice again the measurable differences these panels made and compare with the lack of effect of speaker cables (or the 'library' of cable measurements in general).

I see that Ars Technica / Randi Foundation released the write-up of the ethernet cable test. As I had feared, there are quite a number of limitations obviously evident; from the tester selection (yes guys, you do need 'golden ears' just like you need the psychics in the tests!), to using the direct audio out from a Dell M2800 laptop (ouch!), to the use of Windows Media Player (what self-respecting audiophile does this!?), to Grado open-air headphones in what looks like an area with significant ambient noise, to sadly some really poor statistical methodology... Yikes, as much as I am a skeptic and objectivist, this test really misses the mark. Sure, I guess if one is just casually trying to show that the difference is not "as plain as day", then I suppose this does it with a limited population of folks who might not even care about music quality... But that's a pretty low bar to jump over and folks who buy $300+ ethernet cables are not going to be listening with that kind of gear nor those conditions! To be meaningful, one has to be careful and control the conditions because the only people this test has value for are those you're trying to convince - everyone else (vast majority) either do not care or have put some thought into it and recognize how unlikely the claims are. Sadly, I cannot see any subjectivist audiophile feeling impressed by the lack of face validity and confidence in the set-up nor statistical outcome. For the record, I of course do not believe ethernet cables make any difference. Missed opportunity, guys! I know you can do better...

I've been enjoying some new music (Twenty One Pilots' Blurryface) and catching up with some Arvo Pärt I missed over the years (Berliner Messe, Magnificat Antiphons and Other Works) - great stuff!

For those interested in remasters of seminal albums, rejoice! Roger Waters' Amused To Death is now available on Blu-Ray with a surround track. I had been waiting for the SACD edition for awhile, but I suspect this album originated in PCM (probably recorded digitally in 1992) so might as well stay with the Blu-Ray - less expensive and easier to rip to the digital server. I have it on order off Amazon and it should arrive early next week... Really looking forward to listening to the multichannel remaster even though the original done in QSound already delivered excellent simulated surround.

Finally, Windows 10 has been released. While I do not believe OS versions make any difference to the sound based on previous measurements since I only play my hi-fi through bitperfect ASIO (look at this post where different computers with different OS including Mac and Windows played to the asynchronous CM6631A USB interface produced no difference), I am interested in some of the new features like multiple virtual desktops for my main workstation computer and the return of the Start Menu. Will probably install W10 in the next week... Already it looks like the free upgrade for my Surface Pro 3 is ready for download.

It's that time of the year to go camping with the kids and lazy afternoons fishing... Until next time, enjoy the music!