MUSINGS: HTPC Rebuild - time for Intel Skylake and ready for 4K... (Part I) 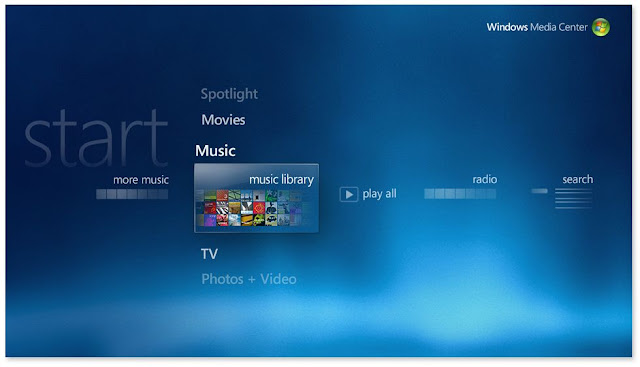 For many of us, I suspect the image above would be familiar... The 'old' Windows Media Center (WMC) software. Alas, as of this year, with the release of Windows 10, the Media Center functionality has died (although arguably after a long period of being on life support since 2009). Not that I ever used the software much but I do recall the hey-day of when Microsoft was promoting the PC as the center of the home theater hub. In fact one of my early Home Theater PC's (HTPC) was built around a reasonably fast AMD processor and running WMC as a PVR with a TV card installed back in the early 2000's.

Now in the 2010's, functions promised of by the HTPC can be handled by Smart TV's and all those standalone boxes like the AppleTV, Amazon's FireTV, or the myriad of inexpensive devices like this. Perhaps wisely from a revenue perspective, Microsoft has shifted the focus on development of media access through their Xbox One game system (and Sony in their PlayStation 4).

Personally, I still love the idea of a full-functioning HTPC in the media room. A machine that can handle whatever audio and video format I can throw at it (I posted some thoughts back in early 2014). And when not watching a movie or listening to music, something I can turn on and use for software like REW or Acourate, surfing, the occasional game, or computer-based karaoke when friends come over :-). Software for HTPC functions have grown nicely over the years - check out some options here. And for those who insist, there's even a hack to get WMC on a Win 10 install.
As an audiophile, I still insist on having a good HTPC in the room for bitperfect streaming with the power and flexibility of DSP duties such as my posting last time with digital room correction using JRiver. Furthermore, at this point in the evolution of consumer AV, there are few options when it comes to multi-channel streaming, easily accomplished with a machine that can output lossless multi-channel audio through the HDMI interface to an AV receiver - I also discussed this previously with my old HTPC build. It was about 2 years ago that I put that Haswell-generation computer together. As I have written previous, I do believe 4K is the future for my home-theater plans. In fact, I believe 4K is the last resolution upgrade I would "need" given the physics and physiology of vision for a good sized home theater screen (70-80" viewed at 9+ feet); similar to how lossless 16/44 audio is pretty well all than anyone ever really needs in terms of stereo audio resolution. For smaller sizes, 1080P is already great.

Now, in late 2015, I think it's time to update my HTPC and prepare for this 4K future... The 14nm Intel Skylake architecture is here, bringing with it lower power consumption and hardware video decoding (and encoding) capabilities aimed squarely at 4K adoption as we head towards 4K Blu-Ray schedule for release in 2016 (I'm sure they were hoping for Christmas 2015!).

Build a modern HTPC with the following characteristics:

1. Stable running fanless. Essential for soundroom placement by the TV and absolutely unobtrusive for audio playback.

2. Implicit in the above statement - low power consumption. Heat generation must be low enough that a reasonable passive heatsink is all that is required.

3. Enough processing power to do everything I need for sound! Should have no problem with running upsampling and digital room correction DSP as described in other posts (24/384 realtime without stuttering is very reasonable!).

5. Enough video processing power! This means smooth decoding of 4K video with modern CODECs, especially HEVC/H.265 (High Efficiency Video Coding) which will form the standard for 4K Blu-Ray compression mechanism and likely a standard for video downloads in the days ahead. Note that a competing CODEC, the open-source VP9, is also going to be popular and is already championed by YouTube/Google in their 4K streams. Here's an interesting article comparing H.265 and VP9.

So, with the above goals in mind... Here are the hardware choices I have made for this little project: 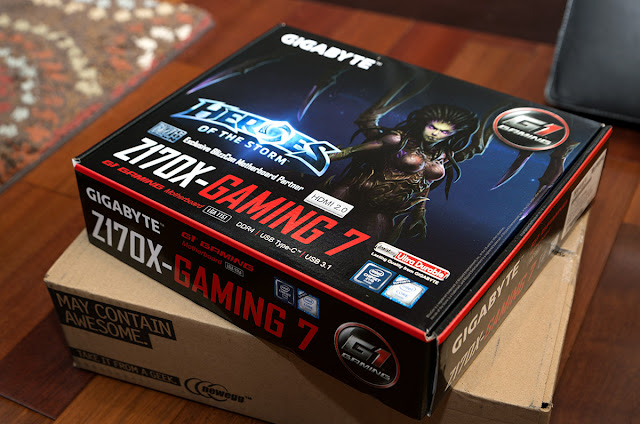 This is the Gigabyte Z170X-Gaming 7. One of the first motherboards to feature HDMI 2.0a and HDCP2.2 through the use of a Protocol CONverter chip (PCON) - the MegaChips MCPD2800 announced back in June this year. The 4K/UHD capabilities of a DisplayPort signal will get converted to HDMI2.0 to provide support for 4K/60Hz.


Weighing in at a price of around US$210, this is not exactly an inexpensive motherboard but then again, we're looking at a modern HTPC with HDMI2.0a build... This motherboard also has other significant future-looking features like: USB-Type C port with Thunderbolt 3, USB 3.1 standard, M.2 for 32Gb/s SSD, not to forget the usual SLI support for gamers with multiple graphics cards.

Audiophiles might also be interested in the 2 USB ports on the rear aimed at optimizing DAC connections:

Note the 2 yellow USB3.0 ports below the PS/2 connector. Through the UEFI BIOS, you could disable power to them if your external USB DAC does not require the 5V supply. Furthermore, they're supposedly hooked up to a dedicated power rail resulting in lower ripple noise (Gigabyte calls this "USB DAC-UP" in their promo). Hmmm... Worth a look in the future I suppose to see if USB-powered DACs like the Geek Out V2 measure any differently plugged into these versus the standard ports...

You'll also see other stuff on the Gigabyte site about "audio capacitors" by Nichicon used in the on-board audio section, a "gain boost" switch ("Amp-Up Audio") for those with lower efficiency headphones, and upgradable audio op-amp (stock is BB OPA2134):
I'll probably investigate/measure the sound quality of this modern motherboard now that manufacturers seem to be putting some energy into optimizing audio... Would certainly be interesting to see how low noise levels are now from those analogue outputs.

For those who believe the ethernet system plays a part in sound quality (despite the lack of any evidence of course), you have a choice with this motherboard for either Intel's Gigabit LAN or Killer E2400 Gigabit (based on Qualcomm chips I think with latency optimizations useful for gaming). Knock yourself out :-).

The other core parts... 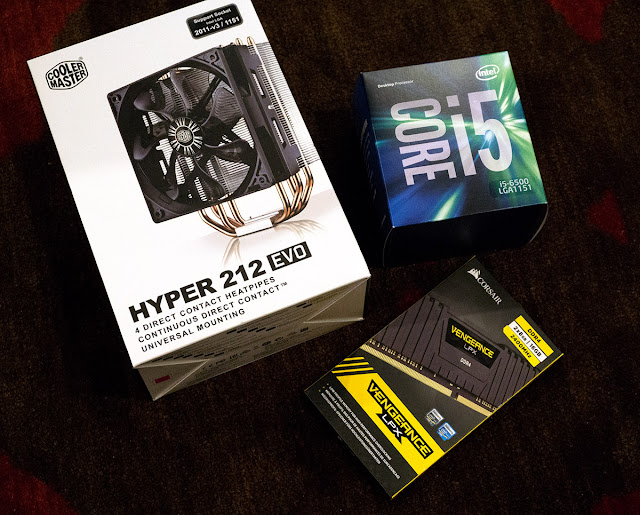 CPU: Intel Core i5-6500 "Skylake" (~US$210) -
A medium tier member of Intel's newest Skylake architecture. 65W TDP at stock speed. Since I have every intention to underclock/undervolt the CPU to reduce power consumption so I can run fanless, there's absolutely no need to get the "unlocked" line of "K" processors. Less expensive chips include the i5-6400 (~US$195), the i3-6100 (~US$130), and even the new Pentium G4500 (only US$90) would likely be just fine to meet my goals. But in terms of future-oriented opportunities, a faster processor would allow me to repurpose this build in the future. Remember, to achieve the goals I set forth above about video processing, check the spec sheet to make sure the CPU supports 4K/60Hz display and Intel Quick Sync Video for hardware decoding (eg. here's the i5-6500 data).

Remember that Intel also has a bunch of "T" processors running at 35W TDP using lower base clock and costing about the same as the standard processors (eg. the i5-6500T) mainly for OEM builders. I'll essentially be doing the same in terms of underclocking anyways so might as well just stick with the desktop retail box.

CPU Cooler: CoolerMaster Hyper 212EVO (~US$28) -
Inexpensive, decent sized heat-pipe design. Can snap the fan back on and run at low speed if completely fanless doesn't work out!

DDR4 Memory: Corsair Vengence LPX (2400MHz) 2x8GB (~US$120) -
LGA1151 motherboards for the most part will be based on the new DDR4 RAM. DDR4 runs at 1.2V (lower than DDR3's 1.5V) which does represent some power savings as well as increased data bandwidth of course. One could save a few more bucks with standard 2133MHz parts which would be just fine for this build (like the USD$97 Kingston HyperX Fury 2x8GB).

You'll generally need 2 identical memory sticks to be installed at a time for dual channel operation.

16GB of RAM is plenty for a build like this. 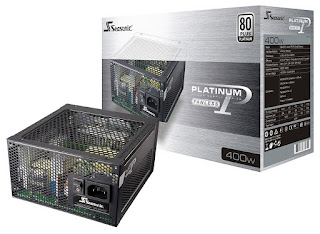 400W is more than enough for a fanless build. The idea is low power utilization...

Note that I've been using this power supply for the last 2 years with the previous HTPC build and it runs cool.

Since I've been assembling computers for awhile, the other pieces were an ADATA Premiere Pro SP600 256GB SSD (~US$84) drive and an old Antec computer case from 13 years ago!

So let's price this out if I were to buy everything today:

I'm quoting today's Amazon retail numbers above and I'm sure you can find better sales over the holiday season with patience (got the Logitech keyboard for <$20 recently for example). Furthermore, I suspect many of us already have a copy of Windows or one could just use a free Linux install and easily save $100. The point is that hardware does not cost much money these days and latest-generation components and features can be had for ~$1000 rather easily. This is the effect of technological advancement with anticipated price deflation ($$$/unit of power).

I also don't mind spending a bit more on this build because although in terms of scientific progress, Moore's Law may be continuing (probably at a slower pace), I believe that as consumers, "upgrade pressure" has clearly slowed. Speed improvements are less noticeable and much of what is gained in computing in the last few years has been better power efficiency and concomitant size reduction (driven primarily by mobile devices) rather than raw processing speed on a desktop. Unlike the HTPC 2 years ago using lower priced components, this time around I fully expect to be using this computer for the next 5 years (I'll let you know if I can't make it to 2020 :-).

I'll post some more pictures, thoughts and observations in Part II as I lay out the underclocked speed, power consumption measurements and such...

Until next time, hope you're enjoying the music (and video)! Happy Holiday Season everyone...