Hey there guys, life and work is busy so I thought the post this week would be to cover a few miscellaneous thoughts from the last few weeks.

First, as you can see in the picture above, it's coming again this year! I guess the Vancouver Audio Show went well enough last year that we're going to see a repeat performance with the Show this year... Nice. I remember that there was no mention of the Show at the usual audiophile websites so I figure I'd let everyone know it's coming. Thankfully here in Vancouver we do have a few audiophile stores with good showrooms. Plus with the city (as well as much of the West Coast of North America) being a place where rich Asian investors like to park their cash (just look at the housing market!), it's a nice place to show off the goods... Of course, it also doesn't hurt given the relative strength of the US dollar to attract a few Americans up from nearby Seattle.

I'll certainly spend some time down there one of those days to check out the "wares".

For more information and tickets, here's the web page.

By the way, it has been advertised that they'll be demoing MQA at this event. Should be interesting to hear it on some hopefully upper echelon Meridian gear. I see that recently at Munich High End 2016, it was reported that the MQA demo yet again did not include an actual A/B comparison! So Element Acoustics and Meridian, think you guys can get a few songs for A/B comparison for us??? Also, it would be awesome if there's a way to turn MQA processing on/off during playback to get a sense of the difference the processing makes. Note that of course to make the comparison fair, volume levels will need to be exactly the same with identical mastering.

Secondly, remember that for all this time, I've been using my old Creative E-MU 0404USB ADC as the measurement device for my tests. I've had this 0404USB since 2007 I believe and every once awhile I'll still use the ADC for little home recording projects. As with any mechanical device, with time the little volume level knobs are getting a little noisy and since the device has been discontinued, there hasn't been any driver update since 2011 (and even that was a "beta" release). I've got to say that I've been lucky with the device drivers in that I haven't had much problem over the years with Windows 7/8/10... I've heard some folks have not been so lucky. Nonetheless, on occasion, I still experience a driver crash usually when switching between ASIO and MME at 24/192 samplerate.

Back in late 2014, I tried out the Tascam UH-7000 DAC/ADC interface. I really liked the sound but returned it due to power-supply related noise issues when using it as an ADC. That was a real shame! Well, it 2016 and it's time to try another device - the Focusrite Forte ($~USD600): 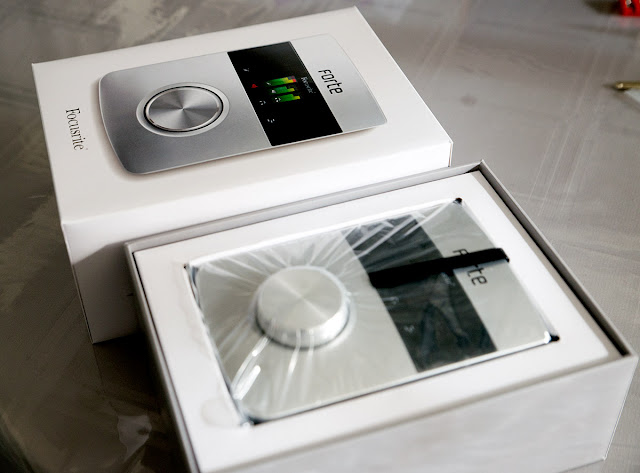 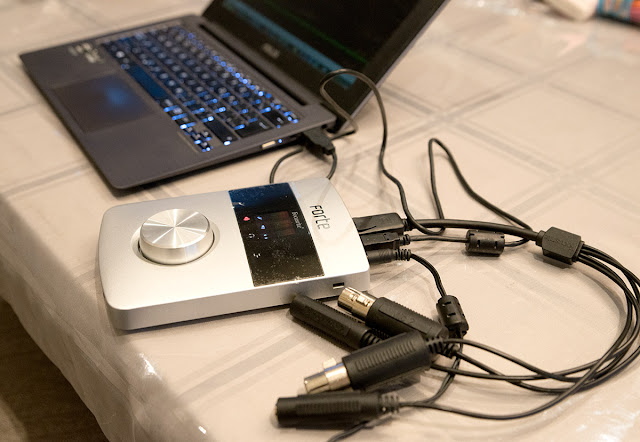 A nice looking device made of a slab of metal. The single control knob has a smooth feel with 4 touch sensitive buttons under the small but adequate color OLED display. So far, the device driver has been stable under Windows 10. Another nice feature is that it can be completely USB powered so long as one doesn't need +48V microphone phantom power and can live with lower amplitude audio outputs. This is great for doing line-level measurements as it means I don't need to lug around the power supply. In fact, as in the image above, I can do it all running off the laptop's battery. I'm not in love with the "break out" cables for analogue in but I guess it keeps the main body of the unit clean. One benefit is that the usual 60Hz mains hum will be absent from the noise floor when running completely off the USB laptop power.

Here's a sneak peak at the noise floor using WaveSpectra to show the FFT with 192kHz sampling rate, no gain applied:

Other than a small 37kHz noise spike peaking at -130dB, it's very clean and even all the way to ~55kHz! The wide pre-amp gain range also easily handles "hot" balanced signals better than the old E-MU.

Nothing's perfect of course and I'll discuss more when I do the write up in the next few weeks... Stay tuned.

I've been keeping my workstation CPU busy doing a bunch of High Efficiency Video Coding (HEVC/H.265) video encodes over the last couple weeks. I already mentioned HEVC a number of months back with the Skylake HTPC build and 4K video. It's amazing, with all this debating recently about MQA in the audiophile world considering IMO the minimal effect it can make, there are remarkable strides being made with the new video compression CODECs like HEVC and Google's VP9. This is what"next generation" CODEC technology should look like!

Even though these new video CODECs are being targeted for 4K displays and UHD Blu-Rays, I've been gradually converting some high quality and high bitrate Blu-Ray 1080P rips over to HEVC to literally see what this new generation compression technology can offer. Folks, this is impressive. Using Handbrake (usually with constant quality of 22, "Medium" preset), typically I'm finding fantastic video quality at less than half the bitrate of excellent AVC/H.264 files. The size of the compressed high quality 1080P video stream is at the point where bitrates are equivalent to a lossless soundtrack like DTS-HDMA or Dolby TrueHD! The price to pay is of course more processing power needed to encode/decode. It will take about 5 hours to encode a 2-hour movie with my 3.5GHz Intel i7-3770K quad core workstation so I usually just leave it running overnight or batch a few jobs together while at work. This is one instance where an inexpensive octa-core AMD CPU likely would have a speed advantage through parallelism. This will obviously get better as the software/hardware matures. In the next 2 years, it's essentially a given that HEVC will be ubiquitous in everything from the basic set-top box to the cell phone to all manners of computers (remember, even the $40 ODROID-C2 has HEVC hardware decoding already).

Isn't it interesting all the gnashing of teeth in the audiophile world about lossy encoding like the "horrors" of MP3 or AAC? Obviously in the video world, nobody honestly really wants "lossless" video and accepts that the only place this should exist is in the video production studio, not at home with the consumers. If anything, more efficient, lossy techniques like HEVC are celebrated rather than maligned. The issue is not about the fact that a CODEC is lossy, but rather for the intention, whether the perceptual quality is sacrificed due to "bit starvation". This is the issue with Netflix 4K for example, where in certain scenes that I've seen, I would wish a few more bits could have been made available to overcome artifacts! Remember that this blog started with an argument with those who felt even high bitrate MP3 somehow "obviously" sounded bad... I'm not saying that I prefer lossy of course as I believe audiophiles should always go for the lossless formats for best quality. It's just that there's no need to be neurotic about high-bitrate lossy especially for most albums where the mastering isn't top notch.

By the way, for those who use Plex Home Theater, make sure to check out OpenPHT 1.6, the community-developed fork which has now integrated the ability to natively play HEVC... Finally :-), a much needed Plex update!

One final thought. Not to be left behind are the new audio surround sound "object-based" CODECs. I wrote about Dolby Atmos previously when I first spoke of MQA in early 2015. It's great to see new Blu-Rays now supporting this format and I see DTS:X has been released to a limited number of receivers thus far but promised as a firmware update to most of the newer models. Although the DTS:X movie list is very small currently, I think the more flexible speaker layout and treating dialogue as independent sonic "objects" with the opportunity to adjust dialogue gain are fantastic steps forward. Just like we saw DTS-HD Master Audio overtaking Dolby TrueHD over the last decade with Blu-Ray movies, I suspect DTS:X will likely do the same with the "overhead surround" arena although the two (Atmos & DTS:X) will likely co-exist... The question is, how many people will actually install these overhead speakers in their home theater rooms? 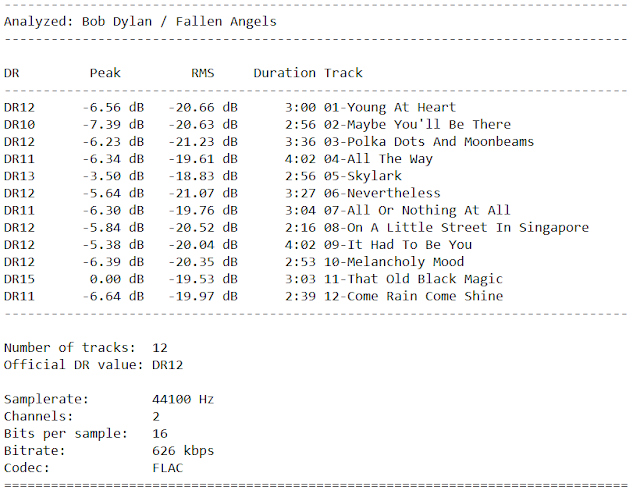 Interesting the relatively low peak levels and the good DR12 result. Whether you like the oldies sung by Bob is going to be rather subjective :-). I suspect this is a good CD to compare with the vinyl release from a sound quality level... At least it wouldn't be comparing vinyl with hypercompressed/peak limited CD digital audio!

I don't know if Sony released a 24-bit version out there, but I do hope it's not "pseudo 24-bit" like last year's Shadows In The Night. Questionable if 24-bits would be noticeable anyway given the noise floor.

That's all for now... Have a great week ahead everyone! Hope you're all enjoying the music...

Addendum: With close to 200 blog posts now, most of which quite long and I hope informative, I've activated the search widget on the right panel. I think you'll find that I've covered most of the contentious issues in audiophilia, and many with measurements to boot :-).