Now ideally, if a file contains no audio information in the highest frequencies, we should see a very clean - low and flat - noise floor... Something like this:
This is the track "Grande Sonate Op.25 I-Andante Largo" by Ricardo Gallén from the album Fernando Sor: Guitar Sonatas which was recorded in DSD256 and converted to a 24/176 PCM file. (You can get this album from NativeDSD.com.) If you watch in realtime the frequency FFT as the song plays, you'll notice that the music is contained up to about 30kHz; that is, the noise essentially stays flat from 30kHz to 88kHz on that graph. This can be easily seen on the "Spectral Frequency Display" in Adobe Audition where I also placed a 44kHz line since if we were to downsample by half, the natural target would be 88kHz. As you can see, there's basically no musical content at all in that highest octave.

Another example of a relatively clean noise floor would be something like this:
This one is from 2L records, the beautifully recorded vocal track "Nato Canunt Omnia" from Psallat Ecclesia by Schola Solensis downloaded as 24/192 (itself downsampled from an original DXD 24/352). While the noise does creep higher from about 60kHz up, it remains low overall. Just like the track above however, if we watch the frequency spectrum in realtime during playback, we see that there is no apparent musical information above 40kHz or so; it's just noise which stays essentially static. Again, beyond the 2x samplerate of 96kHz (48kHz line), there's nothing in the uppermost octave that appears to represent any musical or ambient information.

More often than not however, you see files which are contaminated with noise peaks probably picked up in the analogue recording chain. Something like this:

That was taken from the Linn 24/192 "Studio Master" release of Carol Kidd's album Tell Me Once Again (the track was "Moon River"). It sounds fine on playback of course but you can see that the ultrasonic spectrum is contaminated with peaks up to -68dB or so especially around the 60-70kHz regions; easily seen as a band across the Spectral Frequency Display. If you consider however that there does not appear to be anything but noise above 30kHz, one certainly should start wondering if it might not be best to just filter out all that extra crud since there is potential that intermodulation distortion could affect the audible frequencies in playback.

I started to look at just how many of these "very high-resolution" albums (that is, 176.4/192kHz albums) I had in my Logitech Media Server library. As expected, relatively few - only 5 24/176 albums and another 35 24/192 albums out of about 8,000 total albums (0.5%) excluding singles and vinyl rips. Many of these I collected back in 2008 to 2012 as high-resolution downloads off HDTracks or my own DVD-A rips purchased in the early 2000's. Remember that it was during that time frame when high-resolution audio started becoming available online and DVD-A Explorer came out for DVD-A ripping (~2008). Well, I loaded the first 14 albums into my audio editor and made notes about whether I thought there was musical content in the highest octave afforded by the higher sampling rate.


... and so it goes; that was just the first 14. Even classical and acoustic music (from 2L and Linn) as suggested above in the graphs looking like genuine high-resolution captures at 192kHz could easily be downsampled to 96kHz and I don't think an audiophile should have concern about content loss. I know that we often joke on forum posts that maybe these very high resolution audio files would be preferred by cats and dogs, but honestly, I suspect one's dog and cat would prefer a downsample taking out all that noise and high-pitched continuous tones in the highest octave found in many of these albums (like the Carol Kidd tune demonstrated above)!

As I went through what I had, the only time I considered maybe 192kHz could capture more musical information was with Trondheimsolistene's In Folk Style 24/192 Blu-Ray rip where the track "Grieg Two Nordic Melodies Op. 63: II. Kulokk and Stabbelaten (Cow Call and Peasant Dance)" encroached up to 48kHz and maybe just barely surpasses. Obviously, any information going above 48kHz is of very low levels and unlikely audible given human hearing limitations, so it's all rather academic and perfectionistic. Years ago, Monty at Xiph.org already laid out the technical case against 24/192. Some excellent points there, but even just looking at the realtime spectrum analyser while playing the music, one gets the sense that there's just nothing there to even bother with.

Finally, if you look at how we make recordings, it gets down to the basic fact that there are not many microphones with the capability for extended frequency response. For example, the recent Sennheiser MKH8000-series models can go up to 60kHz, but typically to around 50kHz. And as noted by Demian Martin in the comments of a previous post, we need to be careful about drop-off when recording off-axis (he gives the example of the B&K 4133 and off axis drop-off based on the data sheet page 7). Even for Earthworks' own demo material to show off their microphones' high frequency response, the wav audio download is presented as 16/44 files with obviously no content above 22kHz. Are they suggesting that higher microphone frequency response might improve tonality in the audible range?! If we look at the specs for a typical list of "recommended" studio microphones, the vast majority are rated to 15-20kHz; bottom line is that there's not much high frequency material being captured even if one were to argue that some instruments are capable of strong ultrasonic harmonics. Sure, there could be "life above 20kHz" based on a CalTech paper (you can still find it on Google cache), but how many studios actually capture this and of what fidelity? What I have seen suggests that there's little being retained whether by choice or from the limitations of the microphones used.

[On a side note, of course we do have microphone technologies that can record ultrasonics quite well. For example, in the biosciences, a number of research papers on animal vocalizations such as this paper on rat communication uses the Avisoft-UltraSoundGate CM16 which is capable of up to 200kHz within the limitations of the polar diagram. Great for bird chirps, rats, echolocating bats, and understanding porpoises; not quite necessary for music recordings as far as I can tell :-).]

If you're wondering what settings I use to downsample from 192kHz to 96kHz, the obvious answer is that it really doesn't matter with modern sampling rate converters since accuracy would be excellent. My favourite program for this is iZotope RX using a relatively gentle linear filter (compared to the typically steep 44kHz settings where "Filter steepness" would be around 30 to keep frequencies intact to 20kHz) beginning just beyond 40kHz and essentially free of aliasing: 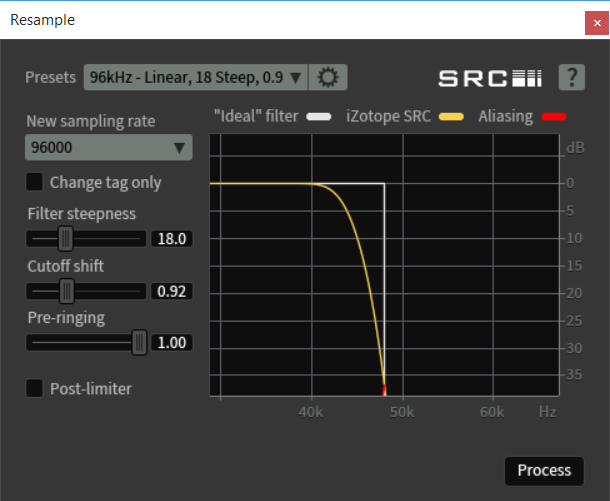 Sounds great and works for me... Of course I could use an even gentler filter but I had this romantic notion that it would be nice to keep frequencies as flat as possible to 40kHz (two times the typical ideal top frequency response for human hearing at 20kHz) and to use linear phase setting ("Pre-ringing" at 1.00) to prevent phase shifting since we don't know if the DAC will further oversample with its own minimum phase algorithm at playback. Not that this likely matters being ultrasonic and all...

In summary: Yes, there is "life above 20kHz". But I see little if any sign of life above 44/48kHz (or 88/96kHz samplerate) in recordings out there. IMO, this is further justification for the music industry, if they choose to be serious about providing truly high resolution quality offerings to consider "keeping it simple" and standardize on 24/96 masterings.

In the comments, let me know what albums you've found to contain recorded harmonic frequencies benefiting from 176 and 192kHz samplerates... I'd love to have a list for demo and assessment purposes!

Before closing off, remember that in this post I'm only reanalyzing my 176.4/192kHz files. In truth, remember that there are many 88.2/96kHz files out there that probably can just as well be downsampled to 44.1/48kHz simply due to lack of actual content. I've many times come across 96kHz files for example that just look like they may have been put through some kind of analogue mixer but the underlying musical content originated at 44.1/48kHz. Apart from noise picked up in the ultrasonic range, and unless on wants to argue that said ultrasonic noise has beneficial and audible effects, I'd be inclined to downsample these as well. This is of course the natural outcome when the music industry cannot standardize on a technically quality controlled product for what constitutes as "high resolution". Also, I believe many audiophiles are tempted to buy the "high resolution" file simply because of the "bigger is better" mindset in the absence of objective standards and analysis (is it any surprise that websites like HDTracks don't allow user review comments for folks to discuss the value of these downloads?).

Finally, remember that I'm not at all saying anything negative about the value of higher technical capabilities like 24-bits or >88/96kHz sample rates. There is of course a time and place where 24-bits resolution is essential (eg. in the studio for dynamic range overhead during production) and high sample rates used to optimize the mastering quality and archiving. It is important to however remember that the needs of the studio does not necessarily apply to the consumer home playback of the final product. Sure, there might be some psychological satisfaction in owning a "studio master" better than CD-resolution despite the technical standard of the content. I look around my collection and see albums like Miles Davis' Kind Of Blue in 24/88 and 24/96, or a copy of 24/96 Harry Belafonte's Belafonte At Carnegie Hall; both from 1959 and clearly neither of which have a low noise floor requiring 16-bits nor frequency extension beyond at the very most 48kHz samplerate. I also see Bob Dylan's Highway 61 Revisited (2015 MFSL SACD) in 24/88 from 1965 - again 16/48 would have been enough. But due to the "classic" status of albums like these, I'm OK with keeping them in a bigger bit "container"... Remember though that it's one thing to accept oneself as human and have idiosyncratic "values" but I would certainly not argue that these albums would sound any worse downsampled to 16/44! This is an example of what it means for me to be "more objective"; maintaining a foundation of decision-making and understanding based on the science, but at the same time allowing oneself a license to take joy in one's own subjective psychological idiosyncrasies.

Have a great week ahead. And of course I hope you're all enjoying the music. 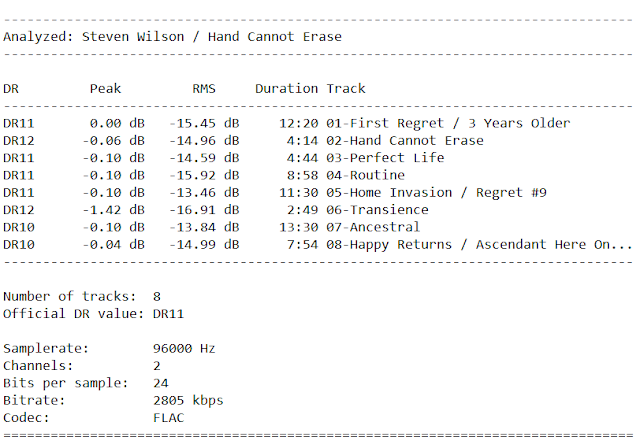 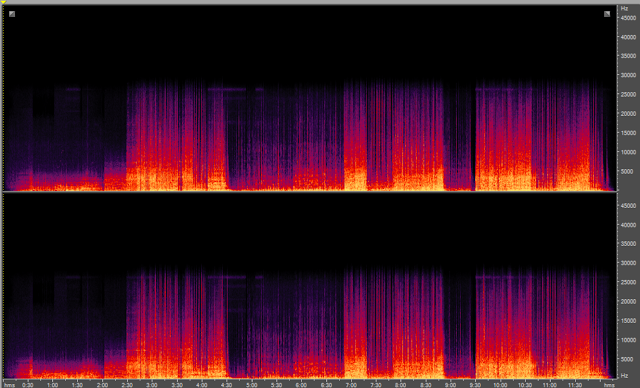 DR11 is quite good for a modern album of course. The lower graphs are for the HDTracks 24/96 download of the first song "First Regret". As you can see there's nothing beyond 29kHz demonstrated on the FFT and Spectral Frequency Display. Based on what I see on playback, I believe resampling and dithering down to 16/48 would have been just fine while saving a good amount of storage space.
Posted by Archimago at 09:13:00