Alright guys... As you know I've measured cables in the past - why audiophile magazines never seem to get around to this is anyone's guess :-). And as I summarized here, there really hasn't been evidence of a meaningful difference between various cables of all sorts.

Over the years, I have tried to measure cables which are considered "audiophile quality" when I can get my hands on them. You know, things like the Synergistic "Tesla" power cables, or these Kimber 8TC speaker cables. Note that obviously if I really wanted to, it's not like there aren't a selection of audiophile stores locally in Vancouver. Without evidence in my own subjective experience or reasonable theory that major differences are even possible, I'm obviously not going to go out of my way to test these things when there are so many other topics to learn about and explore! When I had the opportunity from a friend to hang on to these cables for awhile and test them out, well, why not? Especially since he's had these for years and they're well "broken in"! :-)

No, it's not the most expensive cable out there by a wide margin. But it was positively reviewed in 6Moons in 2005 with an asking price of around US$600; supposedly "very open, dynamic sound with exceptional resolution, transparency and speed... largely neutral and uncolored but fill of life... Zing...". More recently (why don't they date this?!), a newer version called the Micro Diamond was reviewed in TONEAudio and was said to impart "a spectacular level of inner detail... without compromising musicality in any way". Well then, looks like we're in for a treat!

Now, before I go further, I of course need to tell you about the special construction. As described in the 6Moons review, this cable's conductor is made with an annealed gold-injected silver. It's then "covered by a triple-layer of helically wrapped ultra-thin Kapton film before a 99.99% pure silver braid shield is applied". Nice and hi-tech. Then for the outer insulator, we have a "Teflon jacket". Though not shown here, they did come with a nice presentation case according to my friend (he apparently packed it up somewhere but you can see a picture of it on that 6Moons review).

In terms of look and feel, yeah, they feel like "premium" products. Surprisingly heavy given the gauge of the wires (silver and gold after all). The connectors are heavy and solid feel. Well machined. The cable is stiffer than the inexpensive RCA's I'll be using for comparison. The connection is tight but not too tight to worry about ripping out RCA sockets. The silver color below the clear outer insulation is attractive and adds to the uniqueness of the look.

I had my Raspberry Pi 3 connected to my Logitech Media Server using piCorePlayer software for streaming the test signals over wired ethernet in the basement. Notice that the measurement chain is all battery powered from the Pi 3 to the Windows 10 computer (as per the battery powered tests previously). To minimize possible electrical noise, test was run around 11:30PM when kids asleep, no heavy electrical appliances running, and the power grid hopefully quieter as well.

Here are the 3 cables I'll be using today:

There's of course the 1m (3.28') silver-colored Crystal Cable Micro. In the middle is a "generic" but good quality Radio Shack RCA cable I've had for maybe a decade. Then you see the 6' truly unbranded generic but decent gold-plated RCA cable. I can't remember where this 6' cable came from; I vaguely recall acquiring this before 2000 when I bought a Harman Kardon HDCD CD player. Note that the Crystal Cable consists of 2 individual lengths whereas the Radio Shack and 6' generic are of zip cord construction.

As much as CD resolution may be passé these days, it is important to measure at this setting I think for completeness. Unless your listening habits are very different from mine, easily >75% of what I listen to is in regular 16-bits 44.1kHz. Furthermore cable reviewers often claim they can detect differences even with a CD-quality source, so let's have a look.

Mmmmm hmmmm. Clearly we don't have any hints here that the Crystal Cable Micro differentiates itself from the 3' and 6' inexpensive RCA cables. How about the individual graphs? 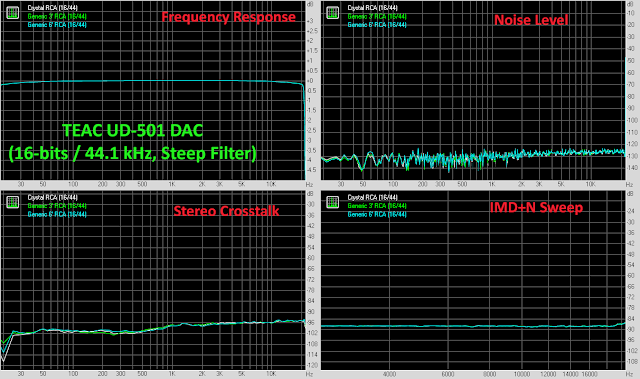 Nothing to see here folks. At "standard" resolution, the cables are indistinguishable even objectively. I trust this is absolutely no surprise.

Okay then, time for high-resolution. Although we might wonder if there could be differences with ultrasonic frequencies, I suspect most of us would recognize that it's the 24-bits of resolution that might reveal something regarding noise floor and sensitivity to interference.

As usual, here are the summary numerical results to start with:

As with the 16/44 results, we're really not seeing much here. However notice that the Crystal Cable Micro has a better result for stereo crosstalk of up to a whole 1dB difference compared to the 6' generic RCA.

Let's now look at the graphs themselves... First the frequency response:
Nothing. Nor would I expect any difference of course! Cables unless of anomalous or inadequate construction perhaps purposely created to have coloration should not mess around with frequency response. So often we hear of cables having "better" bass or "better" high frequency extension, yet never objective evidence for such a claim.

How about the noise floor?
Interesting. I'm enlarging the graph a bit compared to the usual and I've highlighted a few regions of interest. This is looking quite good for the Crystal Cable. It actually is less susceptible to noise compared to the other cables. Less 60Hz mains hum pickup. Likewise less noise around 180Hz and ~300Hz. You see that the 3' Radio Shack is intermediate between the Crystal Cable and the generic 6'. They're all about equivalent with the noise peak around 120Hz.

Suffice it to say that we are looking at differences down below -120dB!

As commented above, the stereo crosstalk measurement showed the most difference in the numerical data. Again, this is looking pretty good for the Crystal Cable up to about 2kHz:
Again, remember the practical aspect of this, on average, we're looking at crosstalk of <-100dB for all cables!

Finally just a look at the IMD+N sweep graph across frequencies:
No difference worth commenting about. These are simple, passive lengths of metal wires after all, carrying line-level voltage with low current; nothing here that's going to influence specific frequencies with obvious distortion.

Note that although I only showed one single measurement for each cable, the measurements were done 3 times with each cable and the differences I pointed out are actually consistent across the runs; not just inter-measurement variation.

Okay. There you go folks. Measurement of a cable that costs quite a bit of change (price all relative of course); 600 bucks when new about a decade ago for 1m (3.3'). Apparently there's been some inflation and they are closer to US$750 these days at The Cable Company. Well... Silver and gold have gone up in price.

As I noted above, they're fancy cables and one could buy them for the non-utilitarian reasons one buys "luxury" items. If you're wondering how they "sound"; they sound great. But a generic set of 6' RCA sounds great with great music too! Implicit in that statement is of course my belief that subjective "greatness" lies more in the artistry and quality of recording compared to a passive length of metal. It also goes without saying that there's no way I would be able to differentiate these cables in a blind test.

I trust it's interesting to see that there are objective differences I can measure with this cable compared to the inexpensive zip cord RCA's. It speaks to the sensitivity of measurements even without using expensive 'pro' measurement gear. The Crystal Cable Micro does seem to pick up less hum and other noise, and the stereo crosstalk measurement is better. Nice to see that indeed it does measure better; kudos to Crystal Cables!

Remember that we must put this all into context of course... We are looking at differences well below -100dB, with noise differences affecting a few frequencies only. Consider this into the context of the cost and how you define value. I think it's fair to say that no human being would likely be able to "hear" the difference when playing music in any event (when blinded to control expectation bias of course, not the kind of "test" that typical subjectivist reviewers "do").

For completeness, remember in 2013, I made some measurements of various RCA interconnects as well. Back then I noted that stereo crosstalk can be easily demonstrated to be different which is what we see here again. This time around, with the completely battery powered setup using the laptop and Focusrite Forte, I can show a difference at the 60Hz AC hum frequency (among a couple other frequencies as well); cool.

Greetings from overseas. Happy November everyone! Obviously I got these measurements done before leaving Canada... What else is more productive than to edit a blog post during a transpacific flight? :-)

Album of the week for me is the octogenarian troubadour Leonard Cohen's latest You Want It Darker (DR13, 2016). As expected, this is presented in his deep baritone speaking/singing voice with variable accompaniment from orchestral, choral to simple acoustic instrumentation. Also as expected, lots of allusions to religious themes, emotional ups and downs, relational conflicts, sexuality/sensuality, and of course mortality. Lots of content to dig into as usual.

Going to be busy at work for the next while in any event. Going "dark" probably for the next couple weeks :-).

Hope you're all enjoying the music!
Posted by Archimago at 08:00:00