MEASUREMENTS: On the value for ethernet "galvanic isolation"... 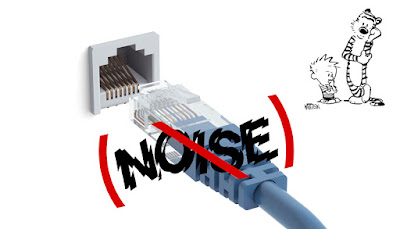 Ponderous. That's the adjective that comes to mind so often when I visit audiophile sites and come across yet another tweak suggestion. Over the years, there have been many such nuggets... Ideas like using a battery to power devices to make them "sound better" in supposedly very significant ways. Switching mode power supplies in general are said to be "bad". USB carries with it significant noise so we should to buy certain "filter" type devices (Audioquest Jitterbug, Uptone Regen, etc...). Server computers sounding different using the same high quality DAC when there's no DSP processing applied to the actual digital signal. OS optimization tweaks "reduces jitter" and again "sounds better"... The possibilities are endless!

On a few occasions, there are nuggets of truth in some of these ideas. For example, yes there is jitter to be found in some circumstances (small but measurable amounts like with S/PDIF and HDMI). Yes, sometimes you can detect noise from computers situated close to a DAC. Realize of course, many times the "solutions" advocated do not necessarily fix the problem. For example, I have yet to see a situation where a fancy passive piece of cable can fix jitter. And more often than not though, the subjective advocate/testifier/witness appears to magnify the purported effects to such extremes in the hopes of drumming up interest in what really should be rather insignificant issues. (Why folks would do this will be left to the reader to decipher... :-)

So, it has been said by some that the ethernet system is noisy and galvanic isolation can help improve sound quality. In fact, even a "review" like this one involving the TP-Link MC200CM has come out to suggest a solution a few months back. Undoubtedly there are subjective "audible" differences reported... And of course, undoubtedly it's a positive impression (hmmm, there almost never seems to be negative resultant impressions!). Whether the difference represents an objective "reality" based on changes in electrical activity or other external physical principles, well, we have no way to know in a report like that beyond testimonial claim.

First, let's think about the ethernet system for a moment. It's meant to run relatively long signal paths throughout buildings and connect devices all around your house. In doing so, already there is transformer coupling baked into the specifications. The main purpose of this is so that ground offsets of potentially many volts between devices will not lead to damage across the network. Furthermore, a beneficial effect of using transformer coupling is already good common mode rejection across the windings for the digital signal being exchanged. The "galvanic isolation" then suggested in an article like the one above is specifically "opto-isolation" where the signal at some point in the network is being transmitted by optical means in the belief that this somehow leads to "better" sonic outcome in the network system by reducing noise that somehow gets into the "audio system" (how exactly this works and how much of a problem is not explained nor demonstrated - typical for articles like this).

Over the years, I have already demonstrated that ethernet works well as a means of digital audio data transmission. I have never found any differences in cables used, and sound quality is fine whether used locally or transmitted globally. But what about this issue of the possibility of electrical interference and the potential for improvement with galvanic isolation? Well, I think I can show what in practice successful galvanic isolation would look like at my home...

Remember this noise plot I showed a few weeks back when measuring the Raspberry Pi 3 + HiFiBerry DAC+ Pro run off a lithium battery?

Interesting don't you think that there's a 60Hz hum (red circle) even in the situation with the lithium ion battery (green) compared to when plugged into an AC adaptor (white)? Hmmmm, where does that come from given that the whole playback and measurement chain is run off batteries - the lithium battery in my laptop feeding the ADC, and the Duracell battery powering the Pi 3 and HiFiBerry DAC+ Pro board?

The answer was obvious. It was a very low amount of noise seeping in from the ethernet connection. The moment I unplugged the ethernet cable from the Raspberry Pi 3, that 60Hz hum disappeared. Before I get to the test results, this is what is in the path of my home ethernet system from the server to the Raspberry Pi acting as streamer so you can appreciate the potential "sources" of noise:

Here it is, measurements comparing audio streamed off the ethernet versus playback with the test signals through WiFi with ethernet cable unplugged (RightMark test results first, then the noise floor across 24/192 sampling up to 96kHz): 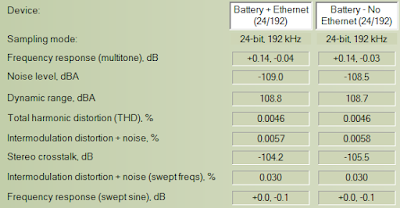 As you can see, in the numerical summary table above, the difference between cable ethernet and WiFi is insignificant. The WiFi strength was good enough to transmit the data needed for the test signal. The only difference is the noise level with ethernet cable disconnected (green) now free of the 60Hz hum. Reassuringly as well, we see that the use of WiFi did not impact the noise floor in any meaningful way up to 96kHz.

And that, folks, is what, theoretically at least, "perfect" opto-coupled isolation could buy you. Done right, for a ~$100 Pi3/HiFiBerry DAC+ Pro, isolation would remove the 60Hz hum at -130dB measured between 20Hz to 96kHz seeping in through my potentially noise and nasty gigabit ethernet network! Hard to imagine anyone seriously advocating spending money on the tiny tiny imperceptible "gain" in what I'm hearing and seeing. Remember furthermore that I'm looking at the analogue output from an audio daughterboard inside the machine itself within close range of the ethernet chipset! Just how much effect does anyone think there would be if I had an external USB DAC connected to the Raspberry Pi? (Rhetorical question...)

Of course, this is assuming the mechanism for galvanic isolation doesn't actually inject any extra noise into the system and make things worse. I've never played with devices like the TP-Link Media Converter but I assume it does require its own power supply and who's to say that this doesn't add a 60Hz hum component worse than what I see above?

The bottom line is obvious. Unless people start running some measurements and find the facts, there's no point in assuming that supposedly "audible" differences especially with sighted listening are necessarily accurate. In the article linked above, it's said there was an "immediately recognizable lower noise floor". Ponderous. If this is true, I fear to ask just how horrible the noise floor was before the tweak! If it was that noisy before, then something is very wrong with the system set-up. And even if there is an audible difference, there's no reason that just because a person may prefer it, that this would represent an objective improvement as in an actual demonstrably "lower noise floor" as claimed.

I've often wondered just where audiophiles come up with beliefs like this. Almost invariably, so many of these beliefs/claims/myths seem to just come out of the blue whether claimed by someone in the Industry or some hobbyist with various beliefs and then perpetuated without a shred of evidence nor apparent interest to verify! Just because there is an "attribution theory" that might hit some kind of "common sense" nerve for some people, doesn't mean there's really anything of substance there. The mere utterance of a "possible" effect does not make it true... I certainly hope with experience, audiophiles develop the wisdom to differentiate that which is possible from the probable with insight and desire to differentiate the two before perpetuating what could very well be utter nonsense.

Anyhow, there you go. I trust none of this is all that surprising! Of course as usual, please provide links (and better yet evidence) if you know of an actual example where an ethernet connection is so nasty that optical galvanic isolation was actually worth it...

It has been a busy few weeks but very meaningful and productive; nothing to do with the audio world which for me of course is a fun, stimulating hobby.

I hope the Americans are enjoying the Thanksgiving season with plenty of decent "Black Friday" deals to keep the shoppers happy. In the last week, I've been listening to Sting's latest rock/pop album 57th and 9th (reference to an intersection in New York where Sting crossed daily when doing the recording). Enjoying it so far and still trying to find quality time to dig into it more...

Have a good week ahead guys & gals! Enjoy the music...

Posted by Archimago at 09:37:00
Email ThisBlogThis!Share to TwitterShare to FacebookShare to Pinterest
Labels: Ethernet, Galvanic Isolation