Before I start talking about measured findings, it's important to mention that I am testing the device with the current latest firmware - 180/88 released around August 20, 2018.

Technically, the DAC chip inside the RME is the AKM AK4490 "Verita" Series "Velvet Sound". Actually there are 2 of these AK4490's inside the machine, each one feeding one of the headphone outputs. I mentioned in the Preview that one of the chips drives the main outputs (XLR, TS) in the rear, as well as headphone "PH 1/2" up front while "PH 3/4" is served by the other DAC chip. This allows the opportunity for independent settings of the two headphone outputs as well as balanced headphone output mode.

Remember that RME also makes the ADI-2 DAC FS, which other than having lower output levels meant for the consumer/home market, and different circuitry for the front IEM output, will likely measure similar to what you see here.

As usual, we whip out the digital oscilloscope and have a peek at the output levels, and channel balance among various other things at a low level. 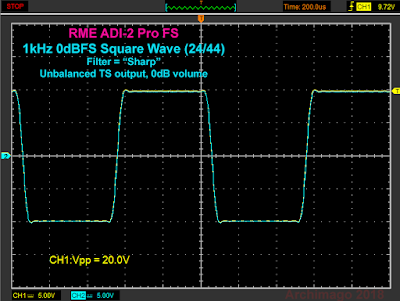 The tracing above is through the rear unbalanced TS outputs at full volume (0dB). We're seeing a +19dBu (19.53Vp-p) output level. Through the XLR balanced output, the signal would be higher at +24dBu (34.7Vp-p).

Notice a nice looking square waveform with a little bit of pre- and post-ringing here because I had set it to the linear phase "Sharp" filter. The default filter is "SD Sharp" which is AKM's name for their minimum phase steep filter (as an aside, funny that AKM uses the marketing term "Sound Color Digital Filter" for the different settings). Here's the headphone output using the default "SD Sharp" filter: 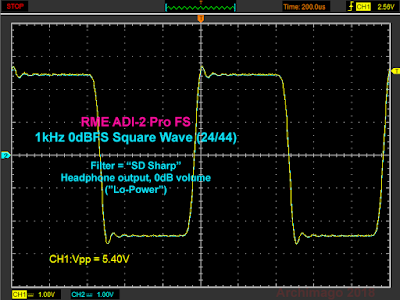 Notice that this is "Lo-Power" mode with +7dBu (~5Vp-p) output level. If we kick it into "Hi-Power" mode, check this out: Wow. "Hi-Power" can put out +22dBu (9.75Vrms, almost 30Vp-p) output level. That should be enough for any pair of headphones. Coupled with a max output current of 260mA, that should be plenty of power for low or high impedance cans (there's potential here for 1.5W into 32-ohms!).

Notice the excellent channel balance for each of the tracings above.

For the record, the "square" waveforms I've been showing in these measurements above were created in 2013 and are somewhat bandwidth limited to show a cleaner square morphology so I can have a better look at peak levels. However the waveform isn't completely bandwidth limited below Nyquist, hence there is still a little bit of ringing so we can make out the type of filter being used.

Here's what a true unfiltered 0dBFS 1kHz square wave would look like with all the ringing through the ADI-2 Pro's TS output using the "Sharp" filter: 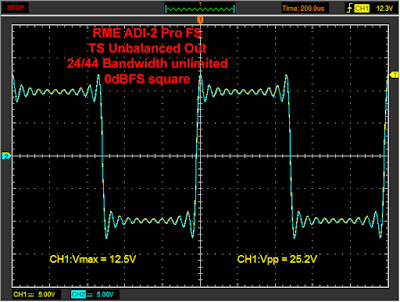 Pretty? :-) This does show us that the DAC has enough headroom such that the ringing peaks are not being attenuated in the analogue output.

As per the AKM4490 DAC chip specifications, the ADI-2 Pro FS allows the user to choose from 4 digital filters plus the "NOS" option as well (Non-OverSampled, filterless):

"SD" stands for "Short Delay" which means "minimum phase", so the first 2 are minimum phase with either sharp or slower roll-off with the latter having more ultrasonic leakage beyond Nyquist.

As usual, we can examine digital filters in both the frequency domain and as impulse responses. So often we see in audiophile magazines only one without the other. As usual, for the frequency graph, I've used a variant of the suggestion by Juergen Reis back in 2013 - over the years I've called this the "Digital Filter Composite" as a composite of the various test tones including a rather strenuous wideband white noise which can tell us if intersample overloading is present. There are also 19 and 20kHz tones that can show intermodulation and imaging artifacts.

Here are the first 2 filter settings (note that I used the Focusrite Forte to grab these at 192kHz which is why you see that idle tone at 37kHz in the images): 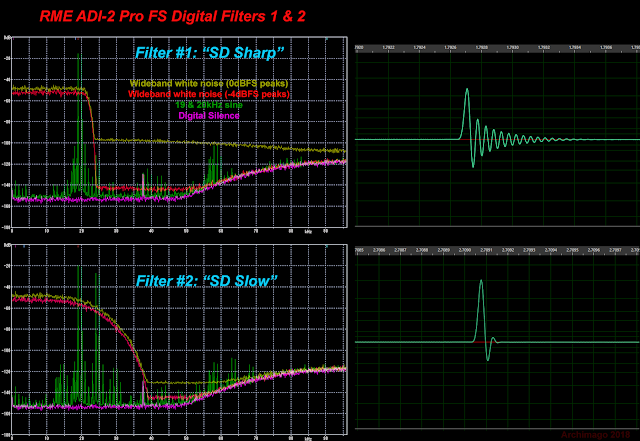 As you can see, these are the minimum phase options. Notice that the higher amplitude wideband white noise with 0dB peaks demonstrates some intersample overloading particularly with the "SD Sharp" setting, but significantly less with "SD Slow".

Here are the other 3 filter options: 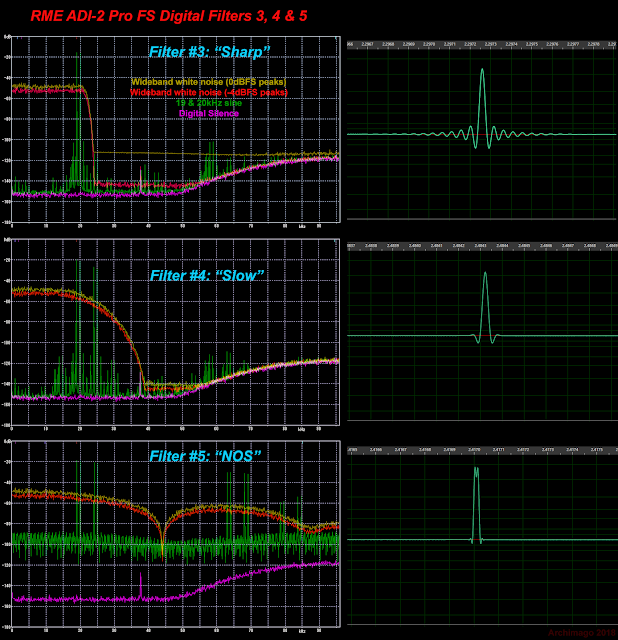 Again, we see some intersample overloading with the "Sharp" option and significantly less overloading with "Slow". As for "NOS", damn ugly frequencies, friends! As expected, we see significant ultrasonic imaging without a proper reconstruction filter. I'm amazed that some companies and audiophiles recommend listening without a filter as somehow being a "superior" listening experience (ahem... Audio Note). Having said this, there's of course nothing wrong with doing your own upsampling of 44.1/48kHz material with proper filtering to at least 88.2/96kHz then feeding the NOS DAC.

Notice that absolute polarity is maintained with each of the filters.

Despite the intersample overloading with the default AKM filters above, I noticed that in the newest firmware (180/88), RME has implemented intersample overload protection when the DAC is fed S/PDIF digital input and internal samplerate conversion (SRC) is activated. For example, here is TosLink input upsampled to 192kHz: 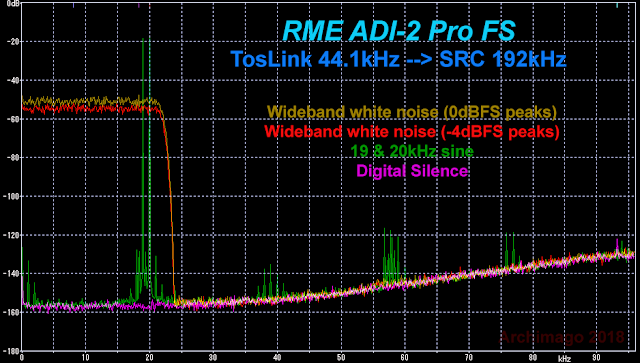 Nice. Alas, I neglected to record the impulse response but from the graph we can surmise that RME used a high quality "sharp" filter here (can't tell if minimum or linear phase) with great ultrasonic suppression and no intersample overload. Notice also that this graph was recorded with the RME ADC itself (hence the nice clean noise floor).

Addendum: Had a quick look, appears to be linear phase used for SRC to 192kHz - nice, no phase shift:

Well guys and gals, that's all for the measurements this time :-). Now you've seen a few of the microscopic oscilloscope tracings and have an idea of not only what kind of digital filters the ADI-2 Pro FS offers but by extension the filters in the AKM AK4490 "Verita" DAC chip itself.

As I've said before, I appreciate the fact that we have all these filter choices to round out the feature set. I'm happy with the sound of good, strong, "brick wall" filtering and a little bit of intermediate phase filtering as discussed in the past.

There's obviously more to come. We'll continue next time and have a look at the DAC measurements like general characteristics such as the frequency response, noise level, distortions and jitter. Of course along the way we'll examine comparisons with other DACs I have around here.

One last thing for fun :-). Since I had the oscilloscope hooked up, I can measure the signal "peak time" (I previously used the phrase "rise time" which would not be accurate as that is usually a measure of 10% to 90% of the transition to/from the mean voltages) for square waves sent to the DAC. Remember my friend's demonstration of increased signal rise times with MQA's filter awhile back? Well, we can do something like that with each of the filters of the ADI-2 Pro FS:

That's cool, right? As expected, the NOS filter will allow a ringless peak-to-peak wave transition in the shortest time but of course in the absence of frequency graphs, it doesn't paint a full picture of actual sound quality with all those artifacts shown higher up using the DFC plot of the device set to NOS.

If we just looked at the square wave edge plot with time measurements, we'd be tempted to say "for sure - NOS is best!" This is not much different than companies like MQA pushing their claims of "time-domain accuracy" and articles like this one from John Atkinson recently presenting a skewed view as if these impulse diagrams alone are that important! Regarding the Atkinson article, seriously, when was drawing a fantasy, unipolar, arbitrary "impulse" in a wave editor and looking for ringless reproduction of such considered reasonable test methodology for audio equipment fidelity!? What kind of real-world audio presents itself like that "impulse" he drew!?

Remember, to claim that impulse response squiggles are somehow "ideal" simply because of a lack of pre-ringing or of short duration is ridiculous. At the end of the day, as I discussed previously about filters, the rational audiophile should recognize that there's no need to place any significant amount of weight on this. NOS (absence of filter), MQA, and Ayre "Listen" settings perform suboptimal filtering. This is why there is little ringing and allows more of the ultrasonic artifacts to seep through - allowing an "illegal" impulse wave to "look good". There is no magic here and subjectively, I have no qualms about some audiophiles preferring the sound of these filters with their associated frequency characteristics. Having said this, I must say that in the other extreme, I also see no need to go insane with hyper-extended filters like the 1M-tap Hugo M Scaler because practically, that appears to be way more processing than is needed!

Hope you're all enjoying the music! Happy autumn / spring - whichever hemisphere you belong to...