A simple way to demonstrate what this looks like is to reconstruct the sine wave test signals listed in the paper at 44.1kHz (I used 24-bits, but 16-bits would work). By using even fractions of the samplerate starting at a specific phase, we can create waveforms with predictable interpolated peaks above digital 0dBFS:

To visualize this, the fs/4 waveform listed above will look like this when constructed in Adobe Audition... 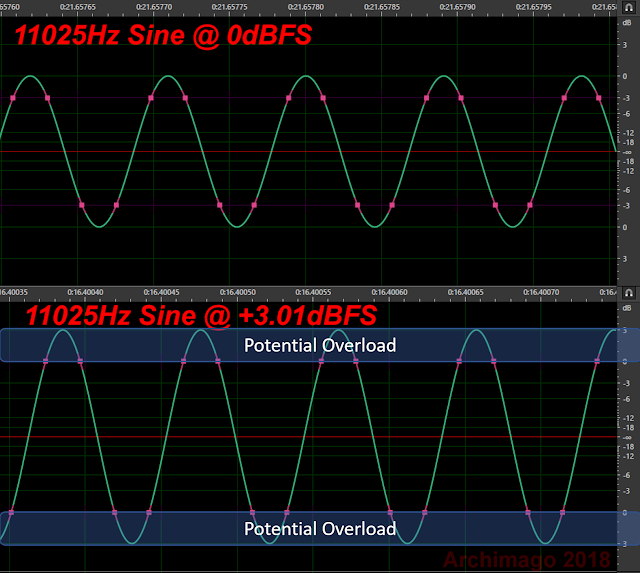 Basically, because the sample points are all in line at -3.01dBFS when we create a 0dBFS sine wave at the exact fs/4 frequency and starting phase of 45º, we can amplify the signal by +3.01dBFS such that the sample points reach 0dBFS. When the reconstruction filter interpolates the sample points, it would have to "fill in" those points above 0dBFS. Hence the potential for overload conditions in the DAC. Furthermore, even if the digital interpolator were able to recreate points above 0dBFS, there is no guarantee that the analogue output is capable of providing the extra voltage.

So, with the test files in hand, let's have a look at how the RME ADI-2 Pro FS volume turned up to full 0dB handles these signals beyond 0dBFS using the digital oscilloscope ("Sharp" filter setting, TS unbalanced output at +19dBu):

As you can see, the RME ADI-2 Pro FS handles the +0.68dB and +1.25dB signals quite well with maintained sine wave peaks appearing rounded as they should. The only time we see an issue is with the +3.01dBFS signal. In fact, for clarity, we can make one of the channels 0dBFS while the other channel the +3.01dBFS sine wave and overlay them to see this: 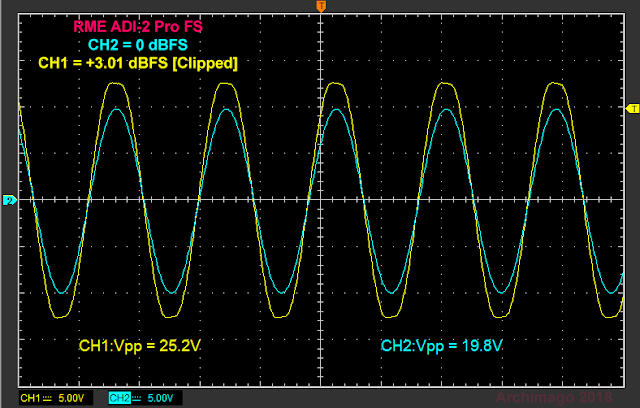 Using the gain in Vpp, we see that the DAC is capable of giving us about +2.1dB extension. Obviously it's not capable of pushing up to the full +3.01dB level (Vpp for the yellow tracing would be around 28V if it did). As a result, we see a squaring off / clipping of the yellow peaks.

What we can say from this test is that the RME ADI-2 Pro FS's DAC output is capable of handling overload beyond +1.25dBFS but lower than +3.01dBFS. With the "Sharp" filter, the overhead is about +2dBFS overhead.

Remember that when I perform the "Digital Filter Composite" test and showed the result of the "Sharp" filter last week:

Looking at a couple of other DACs, I see that the TEAC UD-501 is actually rather poor at handling these intersample overs: 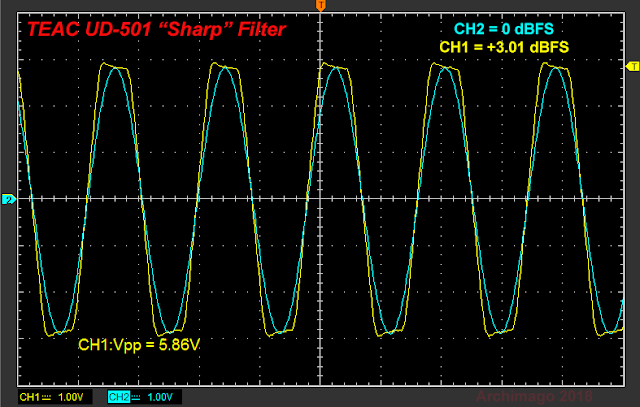 Notice that it has no ability to handle the intersample peaks above 0dBFS at all!

In comparison, the Oppo UDP-205 has no trouble reproducing a +3.01dBFS sinusoidal waveform as suggested by its DFC measurements and as per this oscilloscope output: 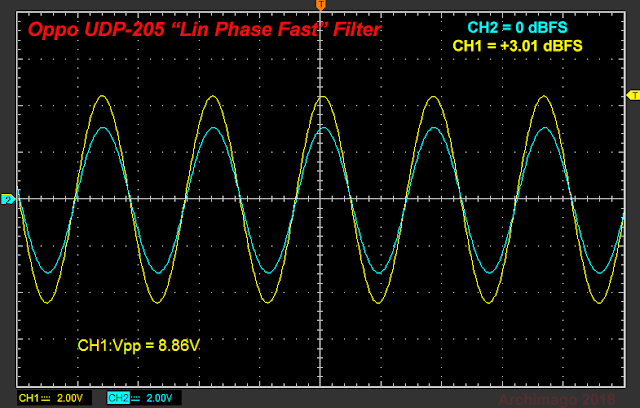 To see the effect of the intersample clipping, we can run a FFT which would show us the elevated odd-order harmonics due to the squaring off of the output. Here's what the clipping looks like with the TEAC UD-501 using all 3 of the Nielsen & Lund sine waves with intersample peaks above 0dBFS: 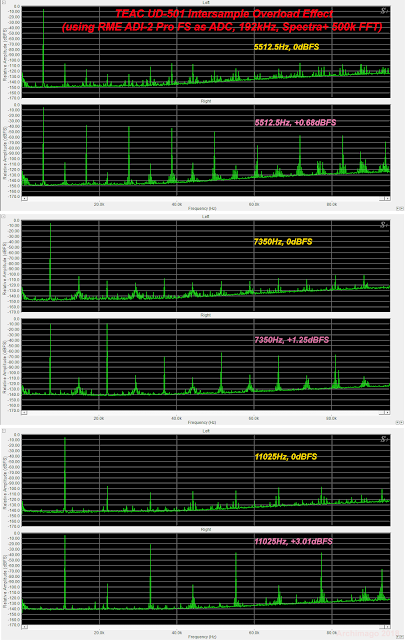 Notice that of the 3 test signals, it is only with the 5512.5Hz signal that the elevated 3rd harmonic is within the audible spectrum (16537.5Hz). The other two signals will have their 3rd harmonic >20kHz and typically inaudible.

Since the RME ADI-2 Pro FS's DAC output only overloads above +2dBFS, if I were to plot the FFT as above, it would only be with the 11025Hz +3.01dBFS signal that we would see the overloading and the effect would be elevated odd order harmonics beginning at 33075Hz - significantly outside the audible spectrum. This is worth thinking about because even if a song contains "intersample overs" that overwhelms the DAC's ability, the induced distortions may actually only affect inaudible frequencies.

While +3.01dBFS is probably a good target to achieve for overhead, note that there is no simple absolute target that will guarantee that intersample overloads do not happen. There are examples of extremely "pathological" samples where one could find intersample peaks extending over +10dBFS! (For further discussion as well, see this page from iZotope.)

In practice, the +3.5dB overhead offered by Benchmark appears to be a good level to use even though this is arbitrary. While I have not systematically studied my music collection, what I have seen indicates that +3.01dBFS overhead (which would tame my 0dBFS wideband noise in the "Digital Filter Composite" graph used to test DACs) appears to be fine for the vast majority of ISPs I have come across.

In this Hydrogen Audio thread, Rescator's test of about 6500 audio tracks (look at the 2nd page and final results), it looks like <1% of ISP's hit above +3dBFS with a collection of quite a bit of modern dynamically compressed music. Remember that this is a count of music tracks with higher ISPs, not an indicator of audibility... Even if a song had an extreme amount of  intersample peaks >0dBFS amounting to 500ms or the time between 20,000 samples at CD resolution throughout a 3-minute song, that still means that 99.7% of the song is unaffected.

Ultimately, I think it's important to remember that what we're talking about here is mostly academic. One expects that a well mastered piece of music really should have a low enough average amplitude and relatively few ~0dBFS digital peaks such that the potential for intersample overloading is vanishingly low. And conversely, one expects that any album that frequently hits the peak level and goes into overload conditions is purposely threatening to trigger clipping if not already inherently distorted in all kinds of ways even before the signal has reached one's DAC. Not unexpectedly (touched upon here, here, here), almost all the recordings running the risk of significant intersample overloading are dynamic range compressed and "loudness war" affected tracks which should have been better recorded/mixed/mastered. There are already many tools available to audio engineers to measure and limit true peak amplitude in their recordings including DIGICheck for those using the RME products - there is no excuse.

My feeling is that while tests can show the potential for overload distortions, and as a perfectionistic audiophile, it would be nice to one day see that most DACs are able to protect against this; I'm certainly not suggesting that the distortion is audible much of the time (I guess anything can be audible if severe enough). Furthermore, while one could look for the amount of intersample overhead in the specifications when looking for a new DAC, I'm not suggesting anyone needs to upgrade the hardware if "suddenly" you find that your DAC can't handle intersample peaks like the TEAC UD-501!

There are ways to mitigate the effect of intersample overloading quite easily... For the RME ADI-2 Pro FS, simply turn down the volume by 1 or 2 dB's will do the trick with those +3dBFS peaks! Remember that the ADI-2 Pro has a +24dBu balanced output level (and +19dBu unbalanced) which is high for home use, so reducing this is rather normal and one would not hear any loss in sound quality with the attenuation. Or if your DAC doesn't have a good volume control, maybe try using your own oversampling with -3.01dB applied (similar to my discussion here where I put in a 4dB attenuation to the "Goldilocks" filter) and ReplayGain scanning and volume reduction likely will also do the trick to tame all that loud music.

As usual, be rational with the facts on hand... In many ways, this issue is like "ringing" with digital filters on one's DAC. Yes, with linear phase filters, once awhile, potentially objectionable pre-ringing might show up with suboptimal music productions. Yeah, we can do something to significantly reduce it (minimum phase or intermediate phase settings), but even if you don't, it's not really a big deal to begin with and only the most anxious, neurotic audiophiles need be emotionally perturbed IMO! :-)

Amazingly, it's the 30th anniversary of Cowboy Junkies' Trinity Sessions this year! My how time flies. Was listening to the album this past week working on this post.

Have a great week ahead and enjoy the music, everyone...

Next time, we finish off our look at the RME ADI-2 Pro FS's DAC performance!

Addendum:
I was curious, since the Oppo UDP-205 has the ability to handle +3.01dBFS overhead, what is the limit that it could potentially deal with?

So far, while I have been using the 3 test tones documented in the Nielsen & Lund paper above, it's not hard to create an extreme intersample peak signal when passed through typical sinc interpolation. For example, with a little waveform editing, we can create this "beauty" (notice that the frequencies on either side of the high ISP are ~22kHz):

Depending on the digital filter settings, there is the potential for the ISP to be up +8dBFS (I've called this the ">6dBFS sample"). Of course we hope not to see this kind of waveform in actual music but using something like this, we can examine the maximum voltage that a DAC can pump out.

Here's what the Oppo UDP-205 produced running the signal above through its "linear phase slow" filter (the "fast" filter attenuated too much of the high frequencies and did not result in the intended ISP): 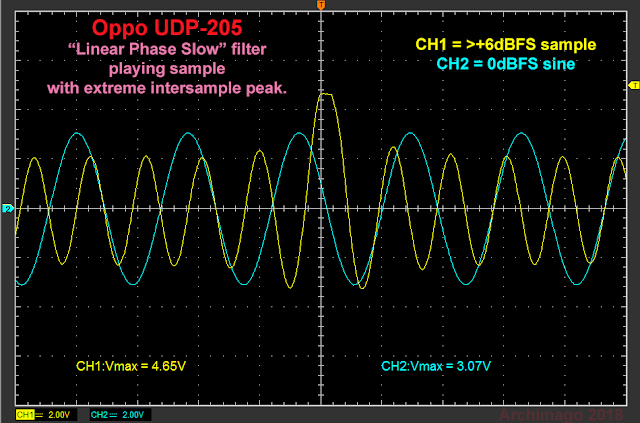 Notice that the voltage peak is up at 4.65V. Compared to the 0dBFS sine wave at 3.07V peak, this is a +3.6dB gain. Allowing for a little overshoot, my belief then is that the Oppo UDP-205 can handle peaks up to +3.5dBFS like with the Benchmark DACs.

To double check, I also ran the signal through the RME ADI-2 Pro FS: 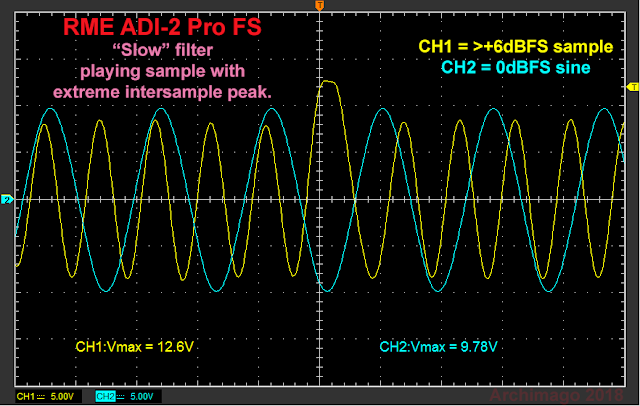 And here's the TEAC UD-501 for completeness - minimal ability to handle beyond 0dBFS: 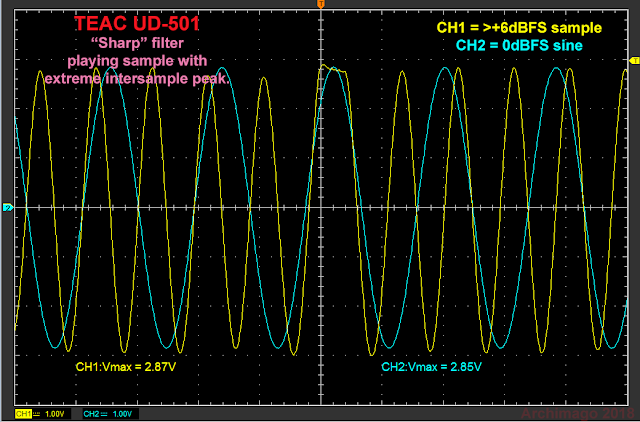 The test is easy enough to do, so will probably incorporate it into future DAC measurements.

Speaking of NOS in the comments... 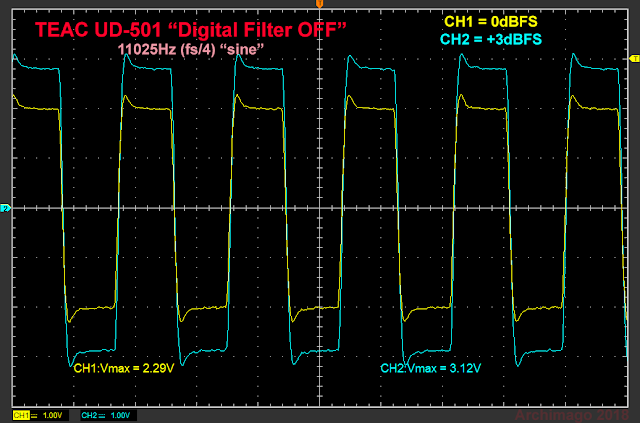 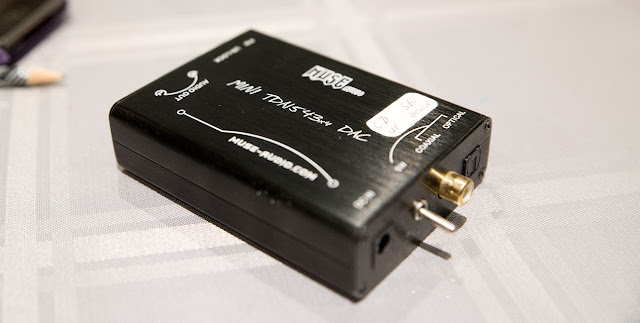 Fed from TosLink using my Raspberry Pi 3 B+ running piCorePlayer: 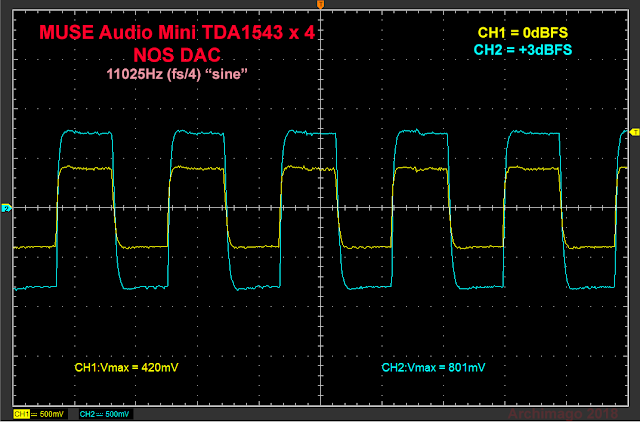 Hmmm, not exactly an accurate +3dB between the channels... But looks about what I expected.
Posted by Archimago at 09:27:00
Email ThisBlogThis!Share to TwitterShare to FacebookShare to Pinterest
Labels: Intersample Overload, Upsampling