MUSINGS: On art, artist appreciation, and "core music"... by 24bitbob 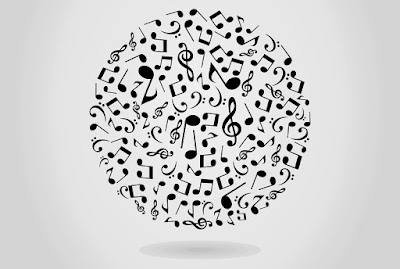 I received a wonderful E-mail from reader 24bitbob in Australia just before the clock turned 2020; considering how the world has changed this year, it feels like the message came ages ago!

As I've mentioned over the years, it is wonderful chatting to audiophiles from all around the world. It's great to hear and consider the insights of others. Ultimately appreciate what the audiophile hobby has meant to them (you!) as a source of joy and love of the music...

I’ve followed your blog for a while and made a few comments / observations along the way under the pseudonym ‘24bitbob’. Truth be told I’ve enjoyed hi-fi as a hobby since 1970-something, and I’ve learned at various times the trap of getting caught having to upgrade things. If taken too far it leads to frustration more than happiness, so I dabble in the hobby; in and out, in and out.

There’s a matter which I’ve been wrestling with for a while which was impairing my enjoyment of listening to the extent that I often didn’t even bother. I wondered if you or your followers had thoughts on this.

I have too much music, far too much. Roon tells me I have just over 2,300 albums, which is not a large collection. The truth is that I listen regularly to around about 30 or 40 albums, but if I call it 46, that represents around 2% of my music collection. Then I have my Tidal subscription which I use a lot and take joy in uncovering great artists and albums I’ve never heard of before. Then I have a few box sets of TV shows that I need to catch up on; movies too, and I buy books at a rate faster than I can read. I’m allowing myself to be overwhelmed with content.

I often see people on hi-fi forums who declare they have 10,000 albums or whatever. At two albums per day, every day of the year, it would take 13 years and 7 months to listen to that lot. That’s without buying new stuff, only listening to an album one time and actually listening to two albums every single day. I have a job and a family, most others do too (though perhaps now most hi-fi buffs are well into retirement) and that is a big call.

Marie Kondo deals with tidying and de-cluttering, but she deals with physical things. It’s not so easy to get advice on decluttering your hard drive, or internet connection, never mind a precious LP or CD collection.

I’ve come up with my own solution. I have identified a set of ‘core music’ by really strong artists each of whom has made a great contribution to music, and I’m going to ‘appreciate’ each of them. I mean listen to their music; read bio’s; read about the making of the albums, etc., and really get to know what made them tick and the contributions they have made to popular music and culture. I guess each artist will become a mini project that I can spend time on and I’m hoping that by doing this I can gain awareness of music that has hitherto avoided me. Also, when I just want to listen, I’ll use Tidal and do my serendipity thing.

Take David Bowie, a favourite of mine for a number of years. Earlier this month I visited London on business and found time on a cold morning to go walkabout. It took 2 minutes on Google to find numerous Bowie landmarks, and a little under 3 hours to walk round them all: the Bowie mural in Brixton; the house in Brixton where he was born (46 Stansfield Street, Brixton); the location where the Ziggy Stardust cover was shot; and Trident Studios in Soho where he recorded his early greats.

Finally, The Ship in Soho which is the pub where he reputedly went for a drink after his recording sessions and where I enjoyed a nice pint and the conversation of a spritely and heavily tattooed young lady. 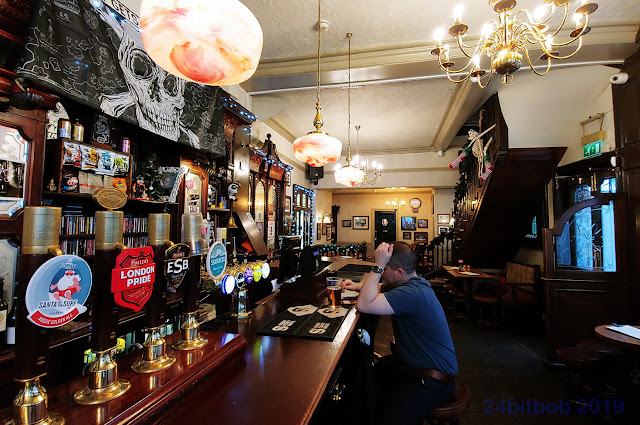 Also take a look at the poster from the window of Trident Studios, that’s a heck of a list of rock classics. I’m now working my way through a couple of Bowie books and have a new appreciation for his 80’s and later albums. I’m actually doing more listening, but it’s more focused and more enjoyable. Next to 'appreciate' will be Joni Mitchell, Led Zeppelin, Talking Heads / David Byrne, Talk Talk and who knows after that. Add up their catalogues and what do you have, 70 or 80 original albums? 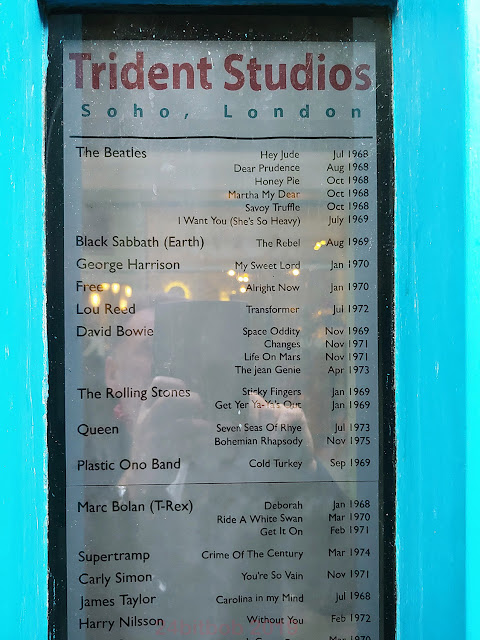 Maybe less is more; maybe others do listen to all sorts of music all of the time and get through 10,000 albums. How about you or your followers?

Thank you for reading this far. I hope you have a wonderful year and wish you every happiness for 2020 and beyond.

Thank you for the beautifully written sentiments bringing out not only one of the "issues" we have these days as audiophiles/music lovers but also your remedy for this. The "issue" is of course an "embarrassment of riches" which we face these days. There is just so much music available at our fingertips that it's impossible to have everything. As "collectors", some of us, especially the more obsessive ones will need to curb hoarding impulses to reach a point where it's "good enough" so that we spend time on the actual enjoyment of the music itself rather than some hope of ownership which we might want to correlate with satisfaction or joy of the musical experience. (This general sentiment I think should be applied to hoarding of hardware as well!)

As I mentioned a few years back, there's just so much music already recorded out there available, that we can go through a lifetime exploring great stuff from over the decades even if we never touch "new music" these days. I suspect this is why it's hard being a musician and making money; supply of music plentiful while demand is not exactly booming considering all the artists alive today and the recordings left behind by the "greats". The one thing we most lack is enough time. Everything around us demands our attention. For our entertainment time, we need to consider not just "which album should I put on next?", but also "what medium should I engage with?" be it music, movies, TV, books, games... One could of course add sports, Internet surfing, audible books, podcasts, Netflix in bed, live concerts, etc. into this as various forms of entertainment and pastimes outside of necessary activities of daily living, school, work, and maintaining relationships.

I totally agree with your solution. We need to be mindful and "triage" for ourselves what really matters. Who are the artists we enjoy and respect? Perhaps what genre of music most speaks to me? Over time, I think as music lovers, we begin to appreciate both breadth (easily satisfied with streaming) as well as depth (this is harder as we have to be more mindful and deliberate as per 24bitbob).

Personally, I'm trying to enhance my "depth" in classical music. Years ago, I bought the full Bernstein box set with the intent of getting through the 12 CDs, all ripped to my music server, but still have not done so to this point. Along the way, I was hoping to get through Jens Fischer's Mahler biography. Maybe this year if the COVID-19 quarantine continues much longer than expected, this could be the project ;-). Another artist I want to explore with intent is the music of Astor Piazzolla and nuevo tango; many excellent sounding "audiophile" recordings of his work (like this)! Again, over the years, I have purchased a few Piazzolla albums which I'll need to dig up again and dive into... You've already listed some incredible artists whom I have deep collections already ;-). Talking Heads / David Byrne among them as I enjoyed David's book How Music Works a couple years back.

It's great that you mentioned Marie Kondo and managing the physical world. We're living in a time of social change. Values of the past including the hoarding of "things" will not be as meaningful as the world reaches (perhaps even already reached) the point of saturation. While this can apply to all kinds of things in this world, for us in audio, the hardware has reached a level where even moar performance is simply not going to yield audible differences (despite audiophile Industry claims), and some people are back to old physical media like vinyl. Simply put, not only are we saturated with music, but I think the hardware has reached a plateau. Evidence of hi-res beyond CD-quality remains lacking. Vinyl as a (non-biodegradable petroleum-based) medium satisfies the impulse of collectors but the push for buying new vinyl was IMO always more about a money-making scheme for music labels than "better" sound quality. And seriously, do people still bother with yet another remaster of Parsley, Sage, Rosemary and Thyme or Iron Butterfly's In-A-Gadda-Da-Vida in 2020 - both of which received 2-channel MFSL SACD releases in the last couple years!? Surely, even the "remastering game" along with the "new format game" (like MQA) must be near their terminus.

As per 24bitbob, I am certainly curious to hear what you, dear readers, are doing? Is there a musical PEP ("Personal Exploration Project") that you're engaging in currently?

As usual, stay safe out there friends. Hope you're enjoying the music despite the anxieties of this remarkable time in history. In my days off, I'm also going through Vincent Verdult's book Optimal Audio and Video Reproduction at Home - very good "no-nonsense" reference for audiophiles (and videophiles!) who want to understand how things work instead of hanging on to typical snake-oil silliness. I'll likely write a little "review" of the book next time.

Remember to get me your listening impressions for the Harmonic Distortion Blind Test! About 1 more month for the data gathering - closing off at the end of April... Something to do perhaps if you find yourself having some extra time at home :-).
Posted by Archimago at 09:01:00