HOW-TO: Partial Frequency Correction with Acourate. Spotify HiFi coming and a look at the evolution of music sales/formats from 1980-2020.

Over the years, I've discussed the use of DSP room correction in these pages (here and here for the more recent articles). In Acourate, there's no single-step macro to tell the software to limit the correction to certain frequencies as far as I can tell. Instead, I saw this comment by Dr. Uli Brueggemann in one of Mitch Barnett's early articles (2013) hinting at a way to modify the inversion step of the filter to accomplish that task. This post is a step-by-step procedure for those interested in doing just such a thing with the software.
Note that even though I'm showing the process here, I'm certainly not suggesting that it's necessary whatsoever. In my listening, a full-spectrum room correction sounds great with the frequency-dependent-windowing (FDW) algorithm Acourate uses. Over the years with friends and family who have had the time to sit and listen, I have never had anyone complain that my usual full-spectrum filter did not sound better than the uncorrected sound in my room (and on occasion, I have measured and applied DSP to my friends'/family's sound systems as well to similar effect).
It's always great to have options though!
Step 1: Prepare Acourate for the work directory, and use the LogSweep Recorder procedure to measure the impulse response of your room.
You can refer to the previous post here up to Item 6 (before the target curve creation).
For my room, the frequency response looks like this after running Macro 1 with my main speakers (Paradigm Signature S8) and subwoofers:

Step 2: Target curve creation.
Now we activate Macro 2 to draw out the target room curve. "Eyeball" your frequency response and create a curve with the idea of the frequencies you will be correcting in mind. Make sure the target curve's amplitude makes sense so that there's no massive discontinuity the moment the correction ends! Both the portion that will be corrected (primarily with peaks attenuated), and the uncorrected portion should be balanced in amplitude.
Here's what my target curve looks like:

Notice that I used the LowShelf function to create a +3dB accentuation to the frequencies below 100Hz, also LF and HF Roll-Off at the extremes. Feel free to enter a Subsonic filter frequency to remove extreme low-end stuff instead of the LF Roll-Off if you want even stronger suppression. I don't mind a bit of <20Hz rumble to feed the subs but getting rid of extreme lows can help with playback clarity. The Subsonic value you put in here will be carried forward into Macro 4 when the filter actually gets created.
Step 3: Calculate the gain level the filter produces.
To do this, we run a quick inversion (Macro 3):

And then run a Filter Generation (Macro 4) - the parameters don't matter much but I would keep the "Max. correction gain" at 0:

As you can see, the "Correction filter gain ratio approx.:" in this example is -1.5dB. Keep that number in mind.
Step 4: Create a flat "simple" 1:1 filter at the gain ratio amount... This flat "curve" will act as the portion of the frequency response which will not be corrected.

As you can see, I entered -1.5dB as per the result of Step 3. Then the program will tell you where this flat 1:1 filter has been saved to. In my example:

Step 5: Now load the 1:1 filter into curve bank number 6 from that "SimpleFilter" directory above:

Notice that I loaded the left 48kHz file ("Cor1L48.dbl") which is the native samplerate used in the LogSweep measurement.
Step 6: Now scope out potential points up to where you want the filter to affect; in this example, around 600-700Hz there appears to be some good crossover points we can naturally merge into the "Simple 1:1 Filter" uncorrected line:

Step 7: Now use the "Amplitude SplitNJoin" function to merge the correction inversion spectrum on the left (to even out the bass frequencies) with the flat uncorrected high frequency section to the right.

Using those crossover frequencies identified above (708Hz left, 669Hz right), I use these parameters in the "SplitNJoin" function for the left and right channels:
Notice that I'm putting the resulting hybrid curves back into the same inversion channel where currently "Pulse48Linv" and "Pulse48Rinv" resides. By the end of the "SplitNJoin" functions, you will see inversion curves that look like this for right and left channels:

Sometimes you might be off by a Hz here and there and the curves don't join naturally, instead you'll see a step up or down... You might need a little trial and error to get the crossover merge frequencies looking reasonably clean.
Step 8: Save Bank 4 as "Pulse48Linv.dbl" and Bank 5 as "Pulse48Rinv.dbl" in the work directory. The new merged curves now becomes the inversion correction curves used by the software to generate the FIR filter in the next step.

Step 9: Now create your filter with settings that work best for you. As usual, do a test convolution to check that the step response looks OK as well:
Here's one that worked for me (remember, if you set the Subsonic filter above in the target curve, you should see that same value in the Subsonic field):

Step 10: We can now double check that the filter is doing as it's supposed to... Pre- and Post-DSP filter frequency responses calculated with the test convolution:

Step 11: Load the new filter up and have a listen ;-).
As usual, JRiver and Roon have worked well for me over the years with their convolution functions.
In Roon, I can easily switch between a few settings to listen to differences for myself including an even more "conservative" filter that only affects the bass up to 300Hz: 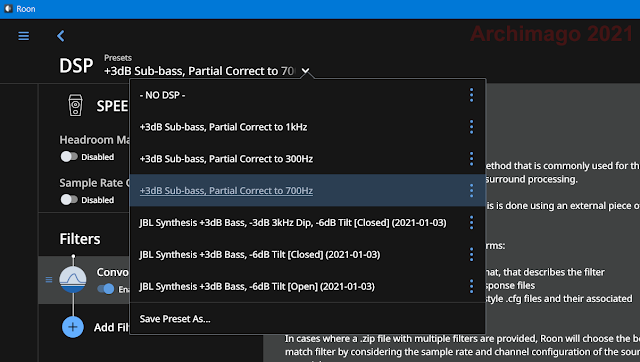 Hope this works out for you... :-)
Feel free to use REW to check frequency response with DSP on and off using the measurement microphone. One should have no difficulty confirming that indeed the DSP has affected the frequency response only within the selected range (ie. up to ~700Hz in this example). For example, here's a quick measurement I did with the filter above as a "proof of concept":
Thanks to Uli for the general procedure and discussions with Mitch Barnett around some of the content here.
--------------------

The big news in audio a couple weeks back was the announcement of a Spotify HiFi lossless service in the months ahead. It's about time! Finally with another of the "whales" (Amazon Music HD and now Spotify) in the lossless 16/44.1 club, Apple must be considering their future plans as well if they see significant consumer demand for the higher tier. I am mindful of the likelihood that high-bitrate lossy is good enough for the vast majority of music lovers. How many subscribers actually demand Spotify HiFi among its >140M worldwide subscribers will be interesting. However, even if just a few percent are interested, we're still looking at millions of subscribers!

Who knows at this point if Spotify will bother with "hi-res" content beyond 16/44.1. Personally it generally doesn't matter to me especially for streaming so long as they don't waste time and money with the MQA nonsense which they'll never get back ;-). The lack of any mention of hi-res suggests it won't.

I think Tidal HiFi especially is in a difficult spot at this point with a US$20/month price point and pseudo-hi-res MQA especially when Qobuz Studio is already down at US$15/month with true hi-res bitrate content on offer. With Spotify Premium lossy currently at $10/month (same price here in Canadian dollars), if they can target that $15/month spot with the HiFi tier if not even undercut that price, the name recognition and user interface quality I bet will win over many Tidal subscribers. This also will put some pressure on Roon I think given that it also runs on a subscription model (unless one were to buy the lifetime license) to expand integration if many subscribers use it for Tidal.

Personally, I cannot support Tidal for obvious reasons (I see it was recently bought by Square, Jack Dorsey of Twitter fame).

Qobuz, I'm guessing you guys will never show up here in Canada? I do hope Roon is able to do something with Spotify or Amazon HD given the limited options in a number of markets like Canada.

Also recently I saw this graphic of music sales from 1980 to 2020 (based on RIAA data if you want to see the details): 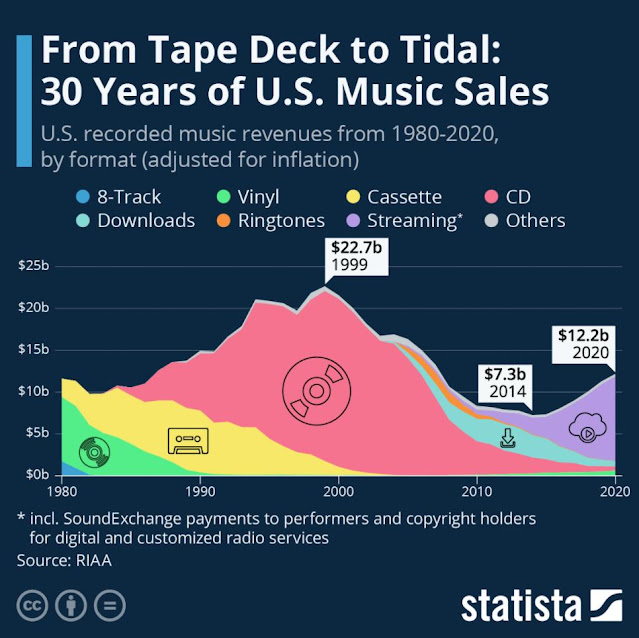 Check out that massive decline of CD sales numbers basically diminished now to about the same dollar amount as vinyl (vinyl is still more expensive so units of CDs sold still higher than LPs). Two decades of CD decline with about a decade-long vinyl "comeback". Yay...
The other interesting thing to be mindful of is that in total, the music industry has not recovered its peak sales from 1999. The 2020 number of a $12.2B industry in the US is ~54% of that peak just before Y2K! Remember this was all before "hi-res audio" was even a thing with DVD-A and SACD and of course as the Loudness Wars waged on and destroyed so much of our music quality with dynamic range compression among other processing in pop and rock genres primarily. I don't know about you folks, but personally even before turning 30 years old at Y2K, I was already struggling with maintaining interest in buying "new music" because of the poor sound quality.

Take care audiophiles - Spring ahead. Hope you're enjoying the music!